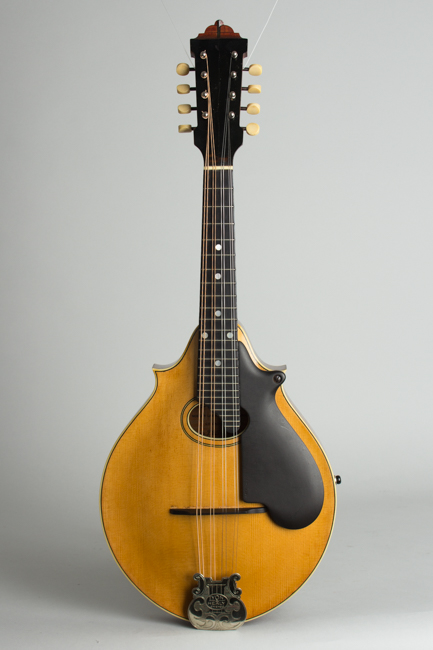 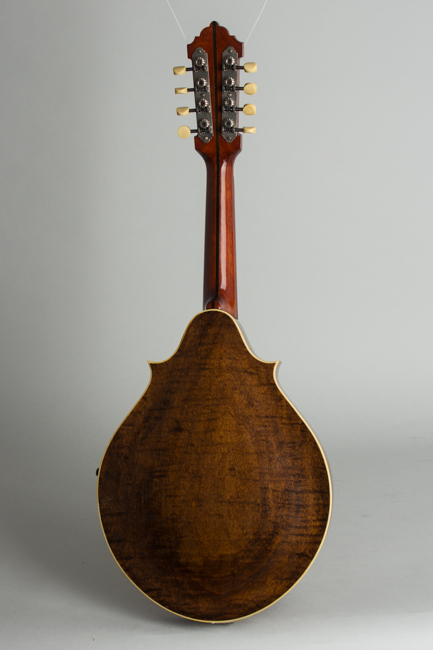 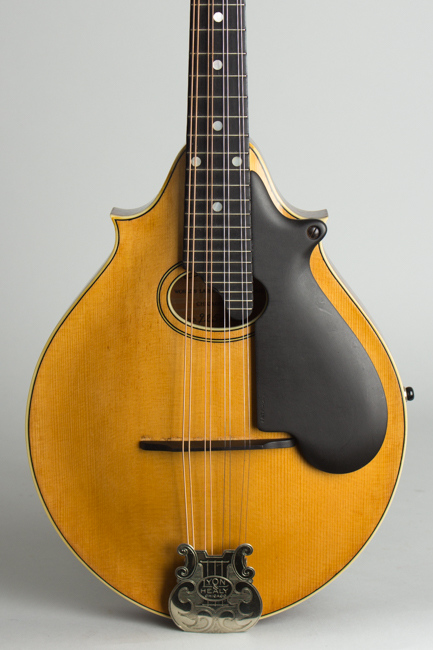 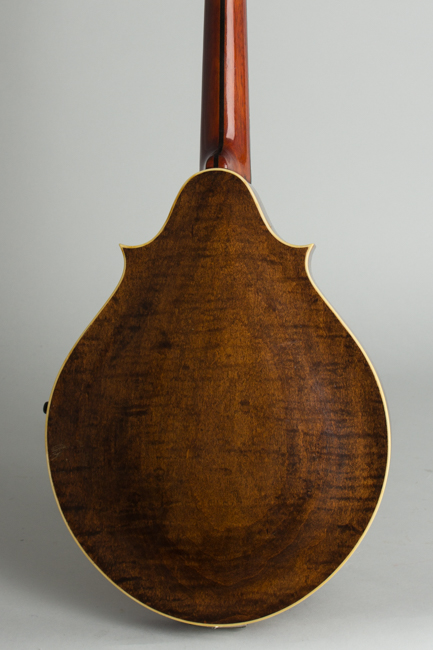 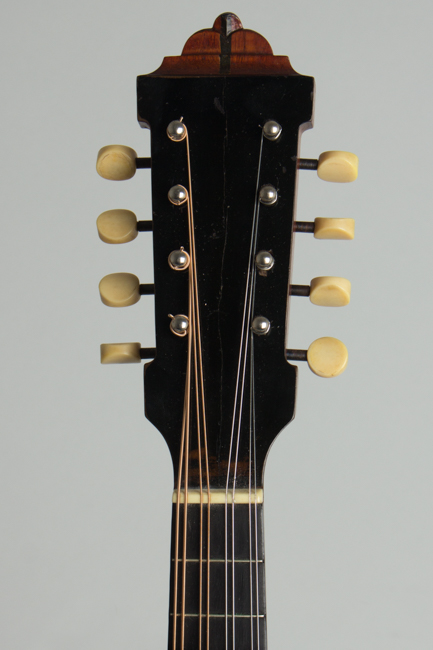 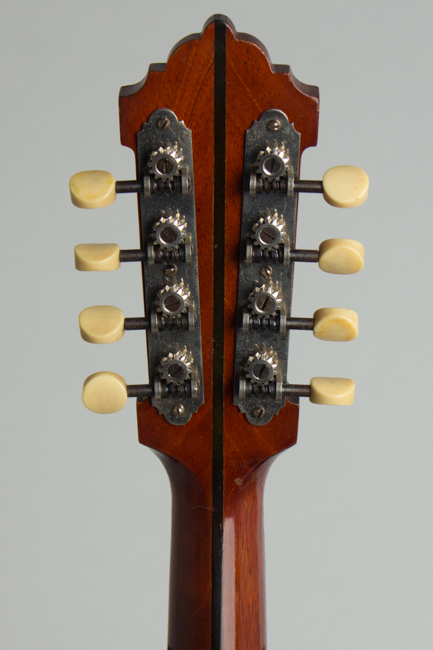 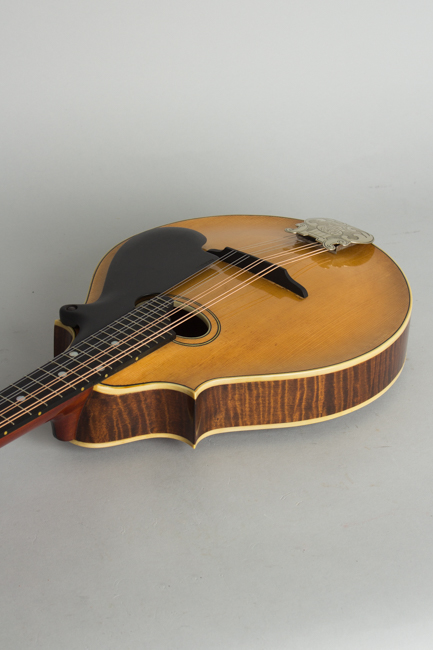 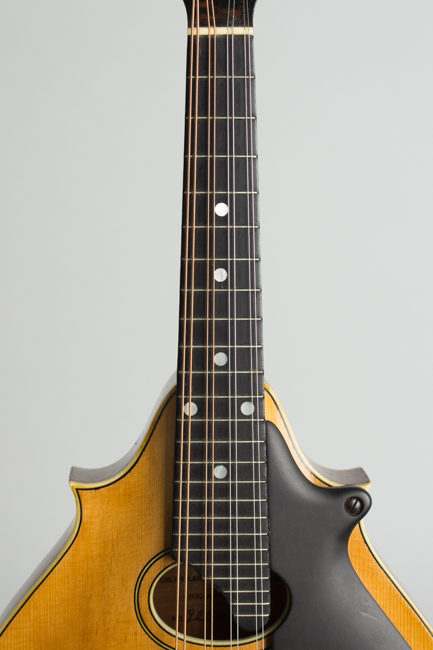 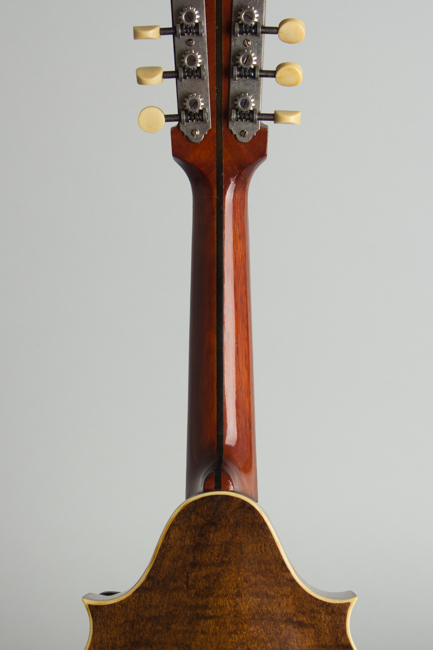 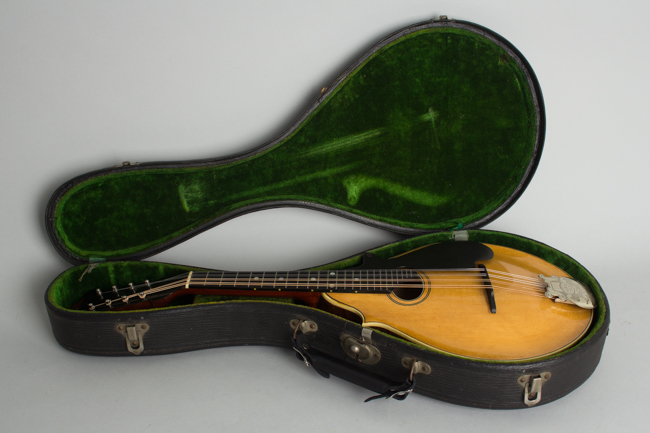 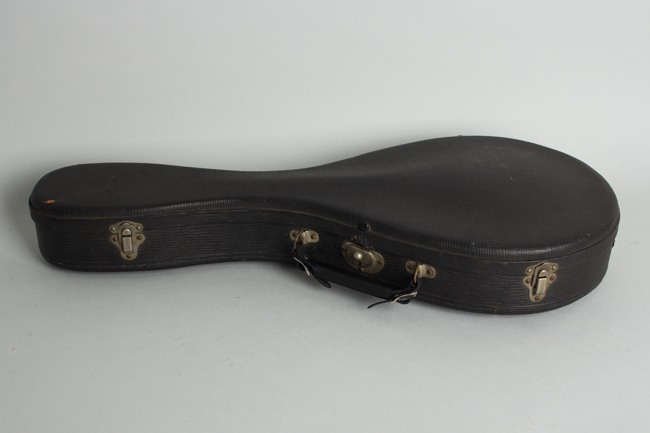 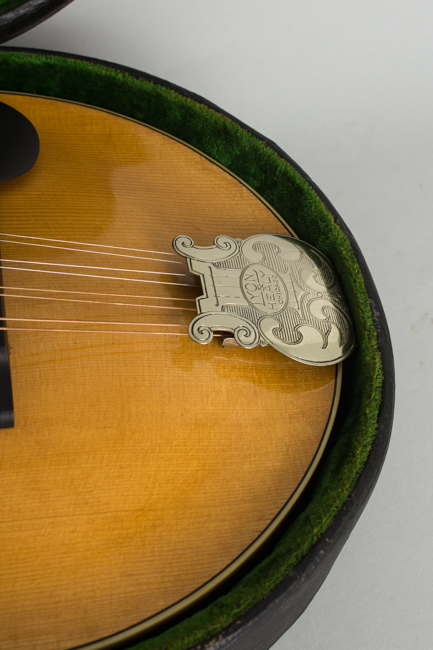 This Washburn Style B Mandolin is one of the elaborate and beautifully crafted "Own Make" mandolin family instruments that Lyon & Healy introduced in 1917 -- the only really serious competition Gibson ever faced in the carved-top 8-string market. Lyon & Healy used the finest materials and an original design for these models, although the general concept harks back to Kalamazoo. The Chicago company launched the line with a blaze of publicity and claims of superiority, likely alarmed that their dominance of the bowl-back mandolin market had been undercut by the overwhelming success of the revolutionary Gibsons. Lyon & Healy carved-top mandolins were fairly successful although they never came close to matching Gibson's sales. They continued to be built (both under that brand and subsequently as "Washburn") into the Depression years.

This Style B was the middle instrument in a three-model line and today seems to be the rarest of the trio. It is basically the same design as the top-line Style A but lacks the elaborate scroll peghead, instead using a conventional shape with a carved pediment that looks like it came off a piece of colonial furniture. The 2-point carved tiger maple body and tight-grained spruce top, shaped pickguard, pull-out leg rest and elaborate clamp tailpiece are all signature features shared with its more pricey sister. The 3-piece laminated mahogany neck is fairly chunky with a rounder backed profile than period Gibsons, with a heavy dot-inlaid extended ebony fingerboard.

The sound of these instruments is more delicate and lighter than most period Gibsons, with a nicely rounded top end and less percussive "bark". They have been considered since the 1920s to be the best instruments ever made for classical mandolin playing, but have not been much known or used by old-time or country musicians. We are always impressed by both the sound and craftsmanship of the Lyon & Healy mandolins, and this Style B -- although the middle of the line model -- is still an extremely fine instrument fully equal to a Style A in sound and playability and worthy of any player's or collector's attention.

This instrument remains in splendid and complete original condition, with just some very light general wear. There are some tiny dings and dents, but no major finish wear or signs of damage. There is a visible line on the headstock face where the veneer is over the center laminate but no open cracks or seams. The only notable loss to the top finish are some marks under the bridge from it being relocated over time. Oft-missing hardware pieces like the large fibre pickguard and elaborate pictoral engraved tailpiece cover are present and accounted for.

This Style B plays extremely well, with a sweet and somewhat lighter sound compared to similar Gibsons. This is as fine an example of this somewhat rare instrument as we have seen. It is housed in the original deluxe hardshell case in very solid shape with a new handle and the top of the center latch missing. It hardly looks as if 100 years have passed since this left Chicago, but this little time capsule is an enchanting survivor of the ups and downs of the last century. Excellent + Condition.
×