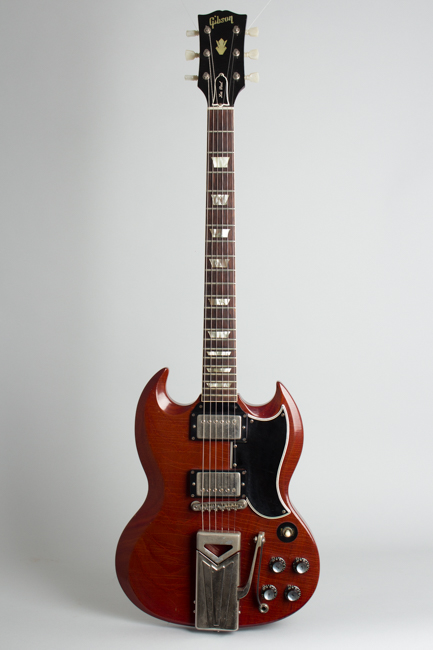 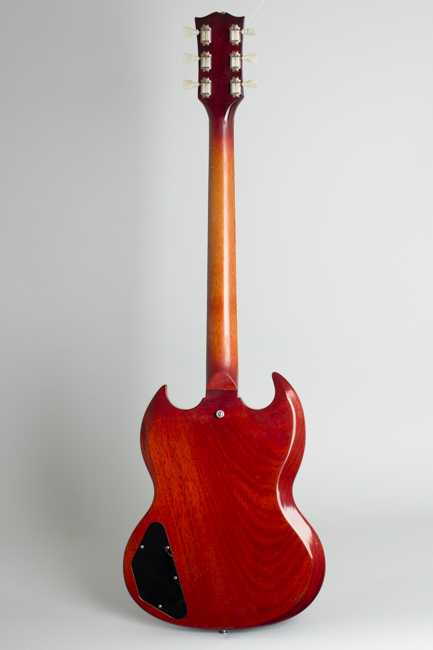 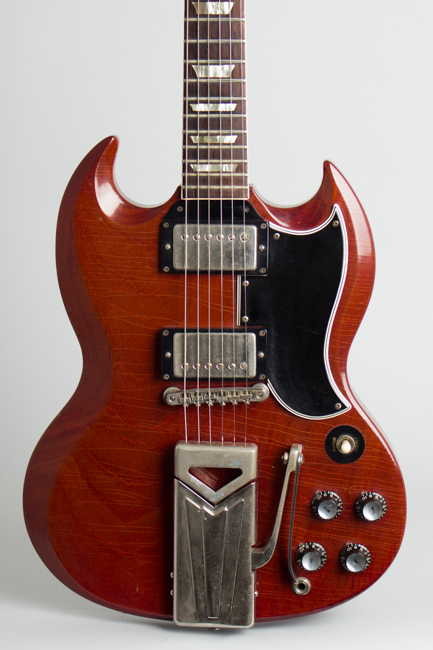 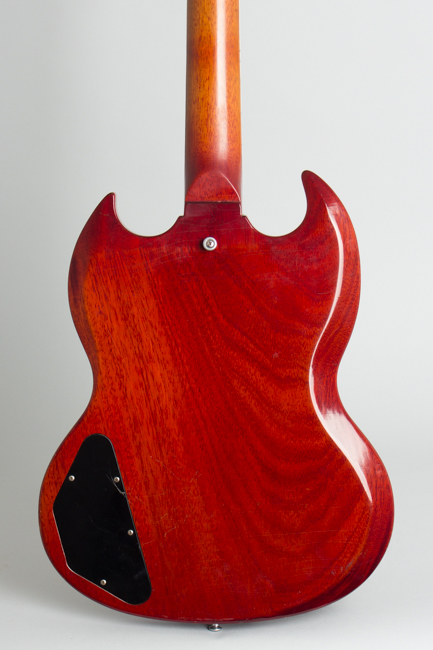 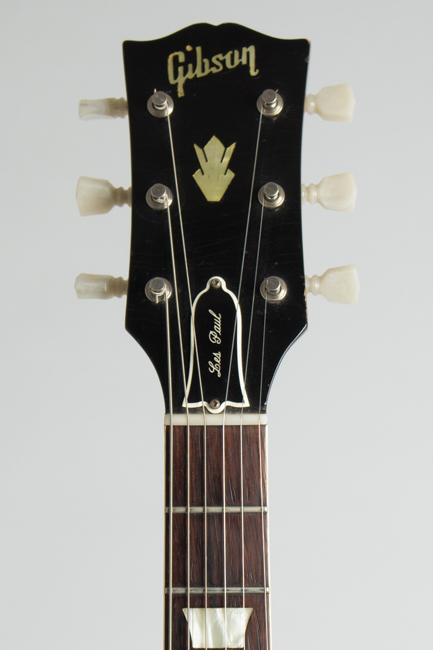 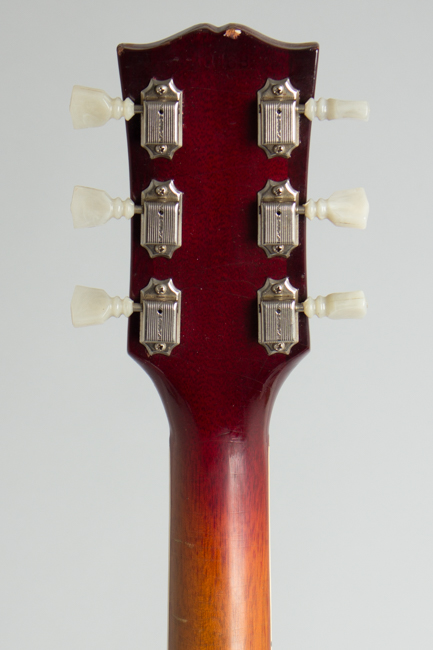 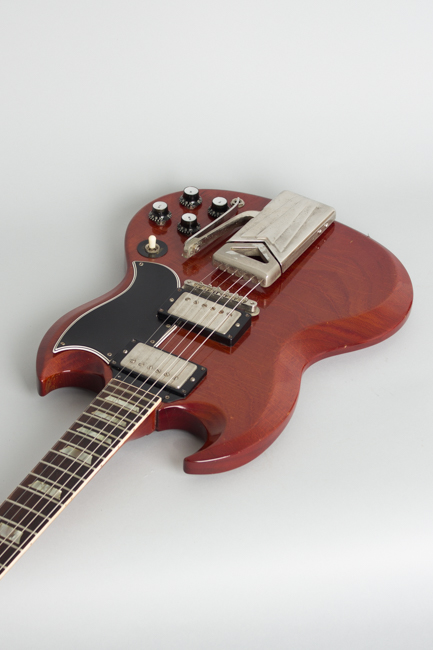 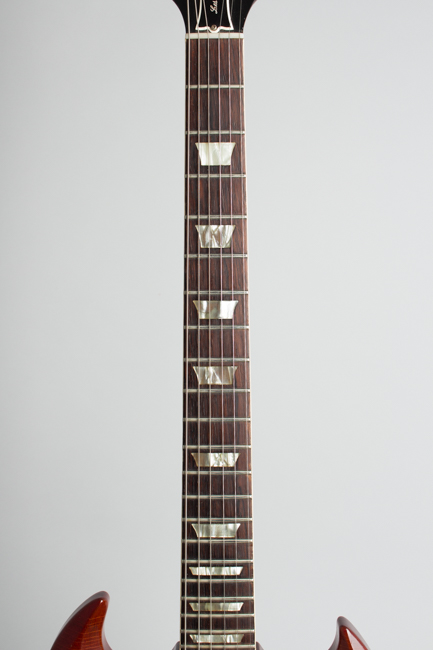 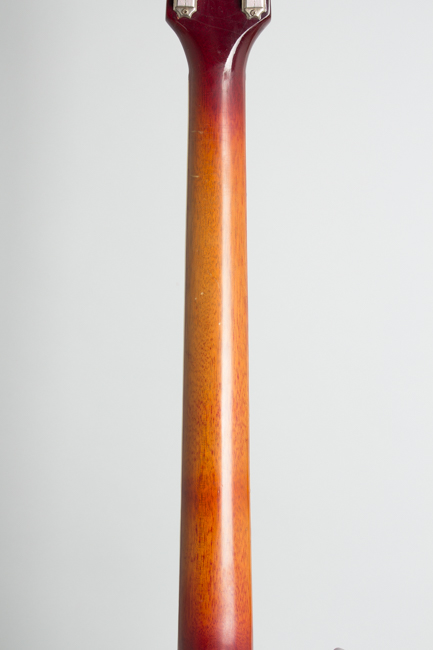 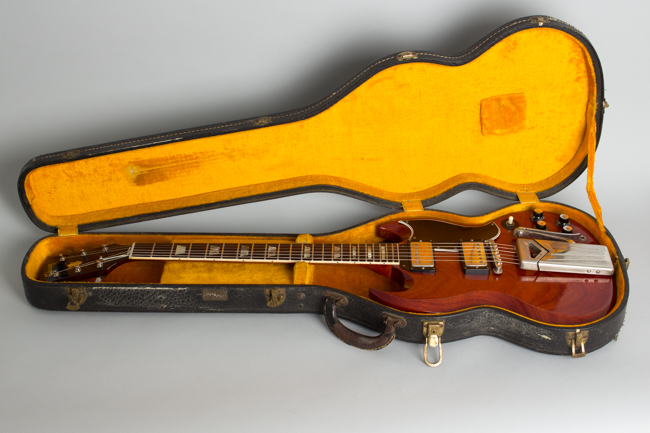 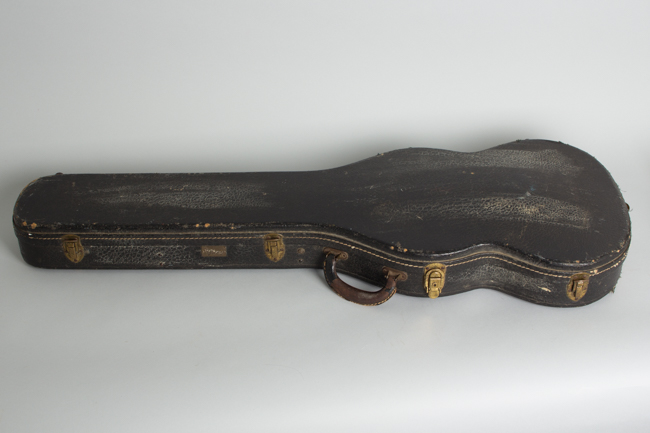 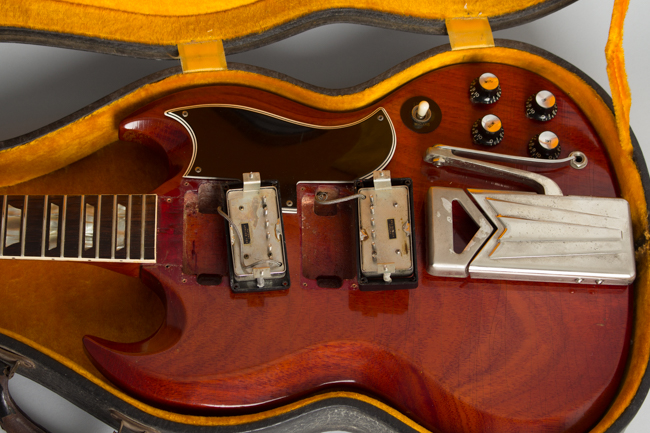 This is a played-in but still lovely example of a 1962 SG/Les Paul Standard, one of Gibson's all-time classic solid body guitars. With a cherry lacquer finish on its exquisitely sculpted double-cutaway body, this was a very radical-looking and feeling instrument in its day, offering more unencumbered neck than anyone had ever seen! This style "Standard" replaced the original single-cutaway Les Paul just at the end of 1960, and was seen as a statement of guitar modernism from the often-conservative Kalamazoo company. While the original single-cutaway Les Pauls roared back to favor later in the 1960s, this slim and supple SG has been played for generations as well.

This mid-1962 guitar mounts two very hot PAF humbucking pickups, long considered one of Gibson's finest sonic creations. The original pots are topped with 1961-style "capped" back-painted plastic knobs. The hardware is all nickel-plated including the original style no-wire low-profile Tune-O-Matic bridge, typical for 1962. The elaborate Gibson vibrato tailpiece of this period proved a troublesome piece of equipment, and many have been removed. This guitar is still so equipped but is fitted with a MojoAxe "Vibro-Stop" that seamlessly converts the unit to a solid stop tailpiece, while remaining completely reversible to the original sprung mode if desired. The bound rosewood fingerboard has trapezoidal pearloid inlay and larger frets typical of the period.

For connoisseurs, this was a great year for the entire SG series, but particularly the Standard. Despite perhaps being a bit too lightly built for the abuses of the road, these early Les Paul-marked SGs with the sculpted mahogany bodies and final PAFs have an aesthetic and sonic character unlike any others. This Standard has an interesting, rather pronounced figure to the mahogany on the top, almost a "tiger stripe" pattern, something we have not seen much.

Less than 1,500 of these elegantly badass guitars were shipped in 1962, and many have been far more heavily used than this one. The SG Standard in general was and remains a very popular guitar, with good reason. It had a particular heyday in the late '60s and early '70s -- anyone who has seen live footage of Cream in the late '60s knows what these ultra light and responsive SG/Les Pauls are capable of! One of the classic "screaming lead" rock guitars of that or any era, and actually a more versatile instrument than many think.

Overall this is a great-sounding and playing 1962 Les Paul Standard -- used but not abused and well-preserved for this particular model. The heel joint is the major trouble spot in all early SGs; this one shows less disturbance in this area than many. There is a bit of very slight touchup to the lacquer around the entire base of the heel, a small crack into the wood on the bass side, and a very tiny one on the treble side, all neatly done. There was no overspray added at the heel. The neck tenon inside the pickup cavity has never been cracked or broken, but did shift slightly and has been reglued. It is nearly impossible to find an SG Standard of this period without some work in this zone; this one is completely solid and the neck angle is very good. This enhances playability, giving plenty of angle to the bridge off the vibrato.

The finish on the back of the neck has some small dings and a noticeable color fade compared to the rest of the guitar. The face of the body has also faded somewhat, with the back (and especially the back of the headstock) showing stronger cherry color. The finish shows light checking, dings, and scuff overall but no major loss. There are a few very small dings and touch-ups on the edges of the headstock face. The nickel plating has some wear overall, with small sections of plating chipping off the cast front end of the vibrato assembly. The pickguard has some scuffing to the top surface and noticeable shrinkage at the bottom edge but there is no cracking and all the tips are still intact. There are some scratches to the plastic control cavity plate on the back and the body finish adjacent to it.

The original frets and fingerboard show just some very light wear but this is an extremely fine-playing guitar. The original PAF pickups have never been tampered with or even had the covers removed, which is getting rarer to find as time goes on. The instrument is extremely light and the neck is very slim back-to-front, one of the sleekest we have ever had even on an SG. Playability is excellent and this is simply a superb-feeling and sounding guitar. The original yellow-lined black case is also in very good shape with some exterior wear but no major damage. Excellent - Condition.
×