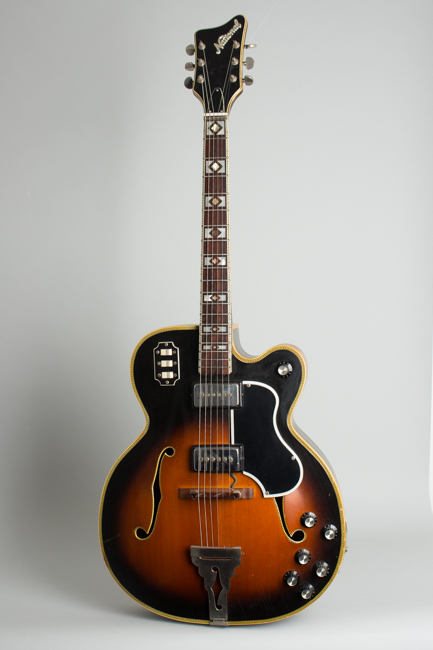 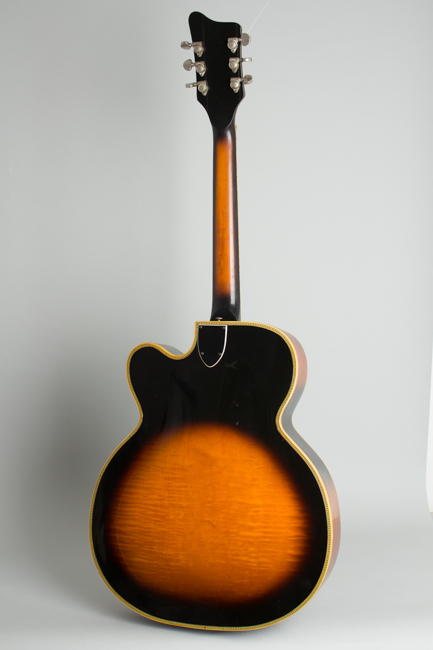 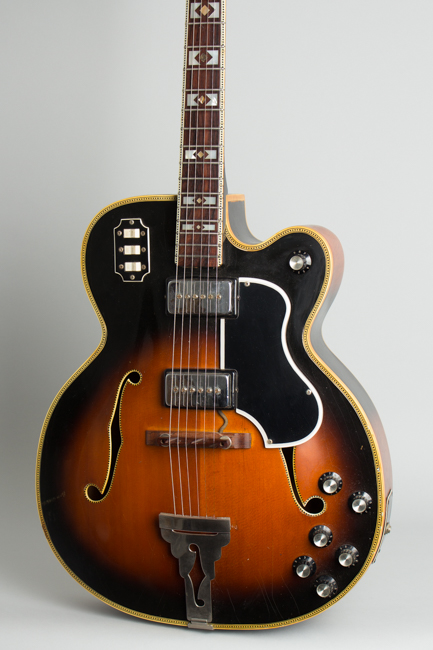 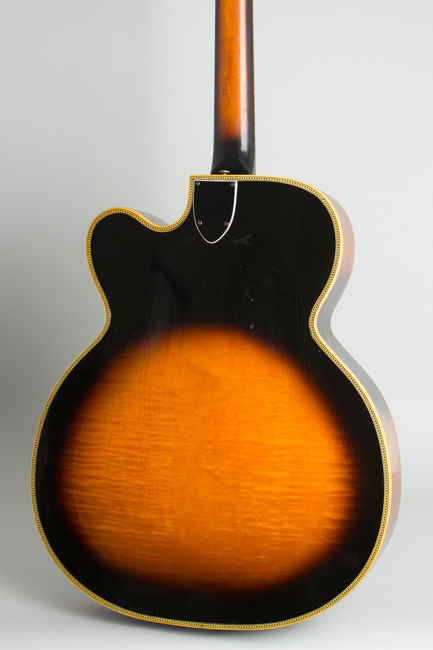 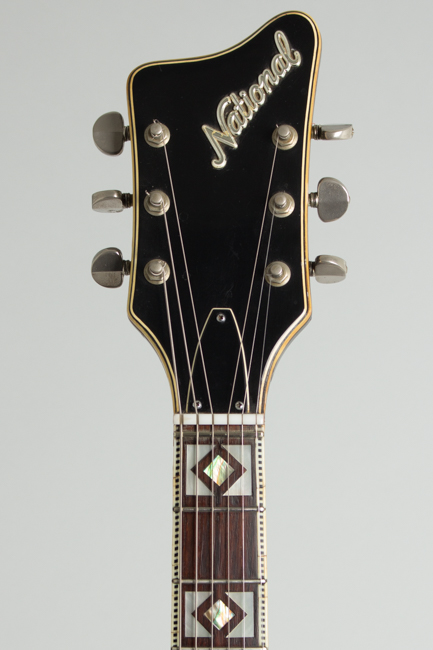 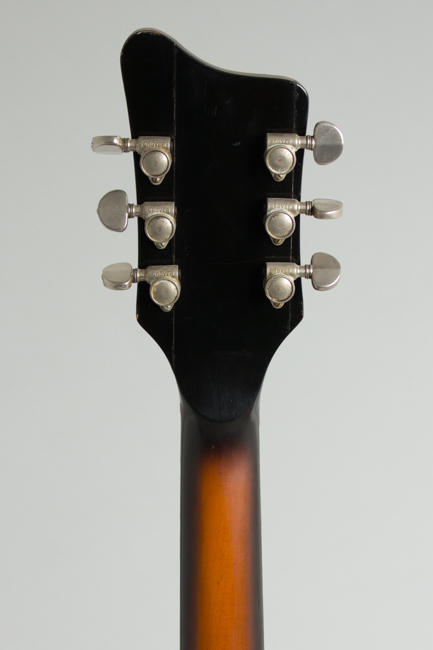 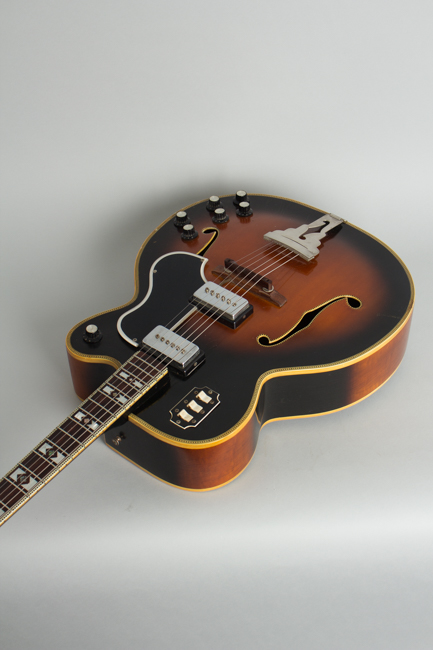 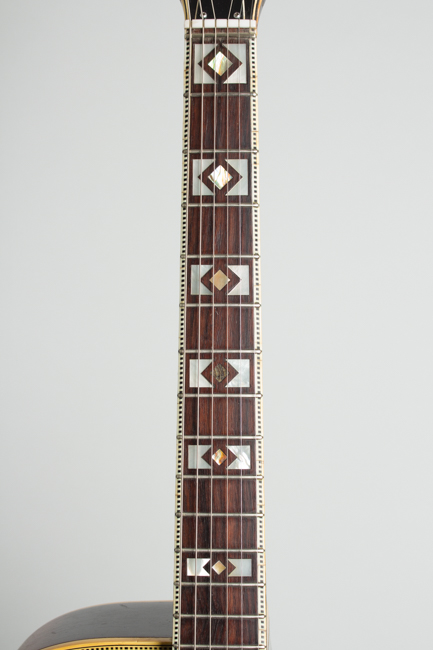 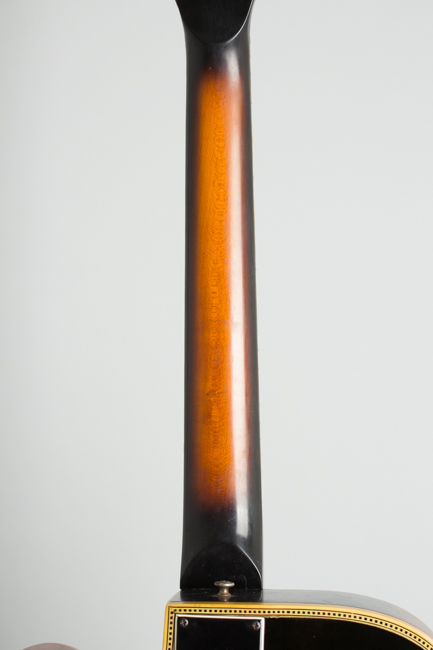 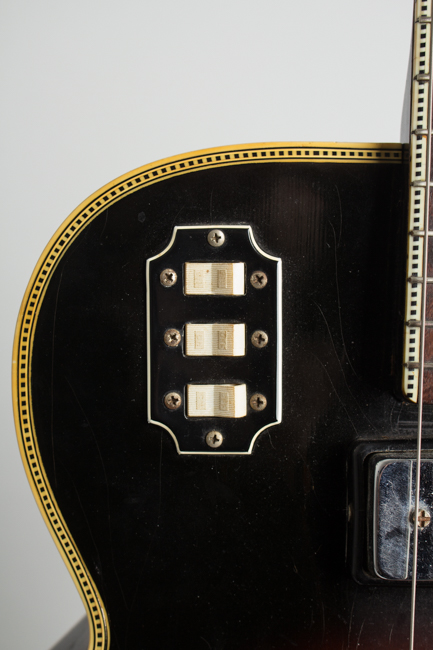 Here's one we've never seen before, or are likely to see again! Never appearing in any catalogs, this huge full-body National electric archtop guitar from the final days of Valco is entirely unique, unrelated to any other known models Valco or its subsidiaries produced. This instrument is not only a fine example of Valco's innovative design, but also an amazing physical embodiment of the complex and often tangled history of the company itself. The guitar is a hybrid of Valco & Kay's design philosophy, offering a glimpse into the design team's attempts to compete in an extremely saturated late 1960s market.

Few musical instrument companies were as innovative, radical, and forward-thinking as National, Dobro, and Valco -- or had as complex a history. Formed by Hawaiian guitarist George Beauchamp & Czech-born luthiers the Dopyera brothers at the height of the roaring 1920s, the National String Instrument Corporation found fast success with their unique resonator instruments. The Dopyeras eventually severed ties with Beauchamp to form the Dobro (DOpyera BROthers) company in 1929. Both companies then offered competing resonator instruments that were a radical departure from traditional guitar design, and a giant step forward for many guitarists of the era who were struggling to be heard. By the early 1930s, Beauchamp had left to pursue purely electric instruments with Rickenbacker leaving National and Dobro to merge and be reborn as the National-Dobro company. This would operate until WWII, when the remaining stockholders were bought out by Louis Dopyera, Al Frost, and Vic Smith, dissolving National-Dobro and forming Valco (an acronym of the first letters of each of their names: V.A.L. co).

National & Dobro had been among the first companies to begin producing electric instruments, offering offered many innovations far ahead of their time: early pickups with humbucking qualities, electric violins, and the first electric arch top guitar. The 1950s and '60s would see the introduction of their Kord-King metal cored neck, Res-o-Glass fiberglass guitars, and the silver-sound Pickup, an early attempt to create a pickup that would sound like an amplified acoustic guitar. Up until the end, Valco would continue to be on the cutting edge of guitar design, consistently offering creative and innovative ideas.

The guitar featured here is no exception. By the late 1960s, when it was built, the Valco company was on its last legs. Having recently acquired long-time supplier Kay, they were making every attempt to compete with other iconic American brands. The influx of more affordable guitars from Japan was making it difficult for any American company to turn a profit; even Gibson, Fender, and Martin were cutting corners. By the later 1960s, some of Valco's lower end instruments featured bodies made in Japan. However, mounting financial difficulties and the inability to stay competitive would eventually spell the end.

This one-off guitar was clearly meant to be a top of the line offering, rivaling Gibson's Super 400, the Gretsch white Falcon, or other similar high end arch top guitars. It was quite possibly built to display at the 1967/1968 NAMM show. Whether or not it made it is lost to history. It features many of National's signature high-end guitar appointments: butterfly pearl fingerboard inlays, Grover Rotomatic tuners, three pickups including the innovative silver-sound bridge pickup featuring a coil in the base of the bridge and magnetic poles suspended from the saddle and an abundance of controls. The neck construction, however, is clearly Kay's design with a National facade. A noteworthy feature is its adjustable truss rod, a feature not offered on any National instrument. The neck profile is shallower and slightly wider than most National necks, also featuring a volute.

Typical of Valco's arch top guitar models, the body itself was not built by them. Since the 1930s, all Valco's conventional wooden guitar bodies had been outsourced to Harmony, Gibson, Regal, or Kay. The body on this National is over 17 inches wide and 4 inches deep, larger than almost every arch top of the time, save the Super 400. Although though the body was built by Kay, it, like the neck, has a mixture of Kay and National features. The checkerboard binding (also featured on the neck) is typical of Kay, while the pick guard and electronics layout are 100% National. The f-hole Kluson tailpiece on this guitar was used on Valco's high-end arch tops until the mid-1950s, suggesting it was old stock hanging around the factory. The bolt on neck is reminiscent of Fender's late 1960s acoustic guitars with a neck pocket and giant block features three very long neck securing screws with a fourth for tilt adjustment.

The excess of knobs may appear intimidating at first, but is actually quite practical. The cutaway has a master volume, while each pair of knobs on the lower bout are volume and tone for each pickup. The three switches are individual pickup on-offs. The two standard magnetic pickups on this instrument are yet another National-Kay hybrid: National's "Vista Sonic" pickup with Kay Barney Kessel-style screws! The bridge is fitted with National's silver-sound pickup but is somewhat unusual, featuring a slightly narrower base than other versions. The way this is wired deviates from other production models as well, using the tone knob as a blend knob with the neck pickup. This is a significantly more useful configuration than the typical wiring, a hint at where things were heading had the company faced a brighter future.

This guitar shows some wear but remains in overall excellent condition. The finish shows minor checking but is basically dent-free. The only notable repair to the guitar is some minor fretwork. An excellent-sounding one of a kind electric guitar from the end of the National company! Overall Excellent Condition.
×