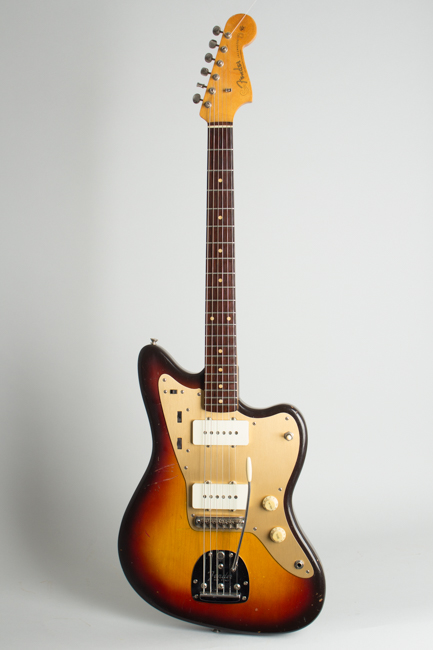 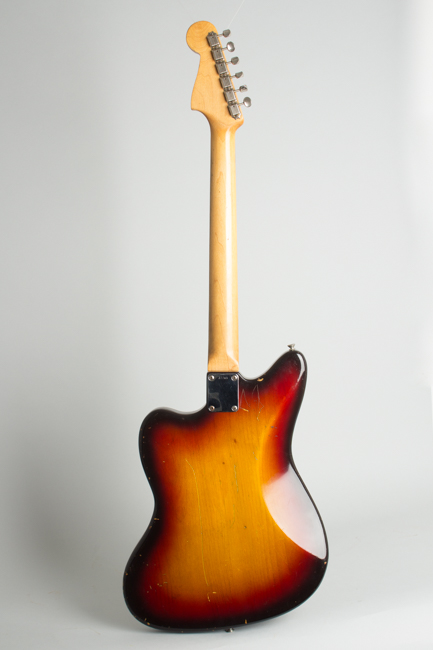 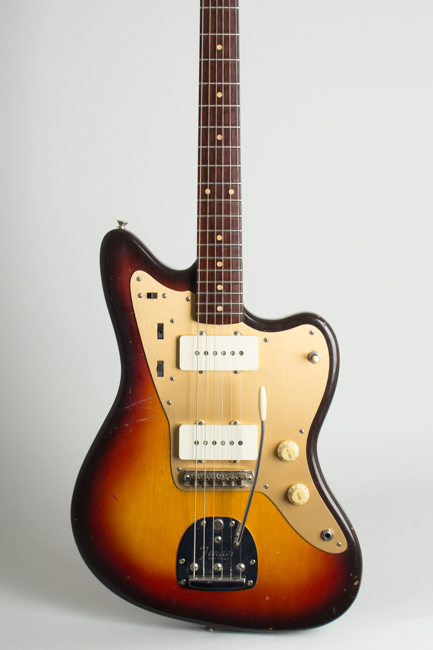 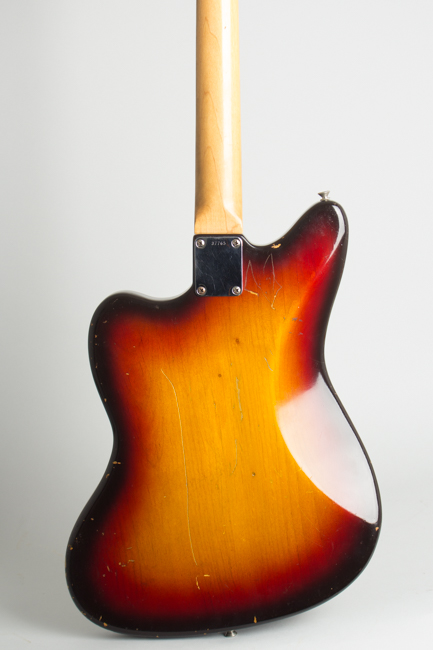 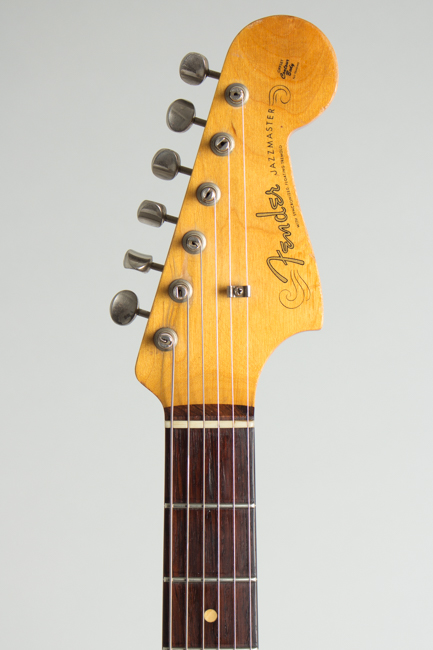 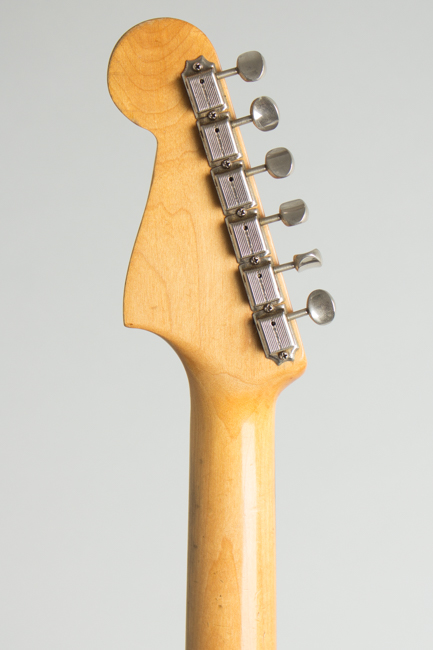 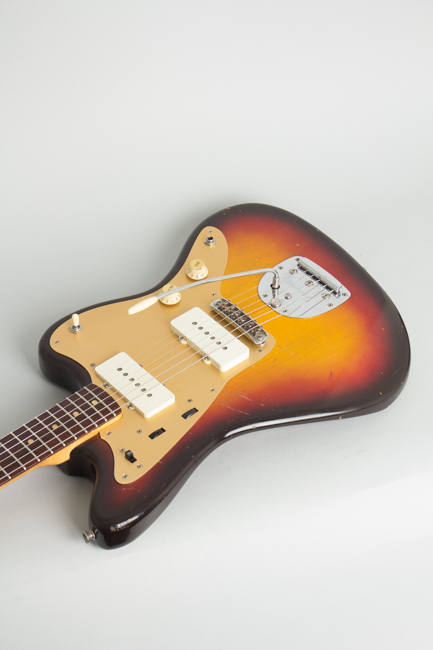 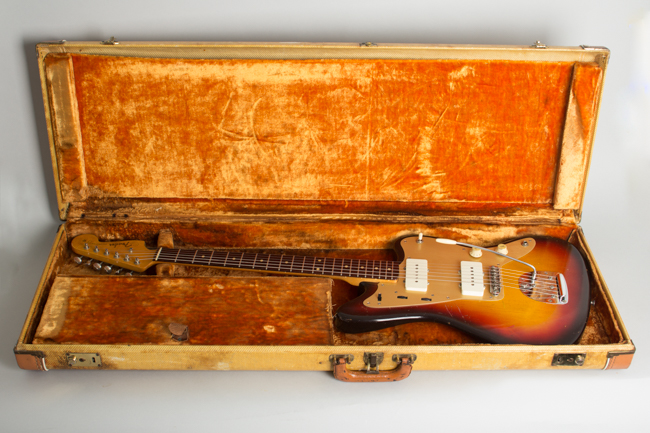 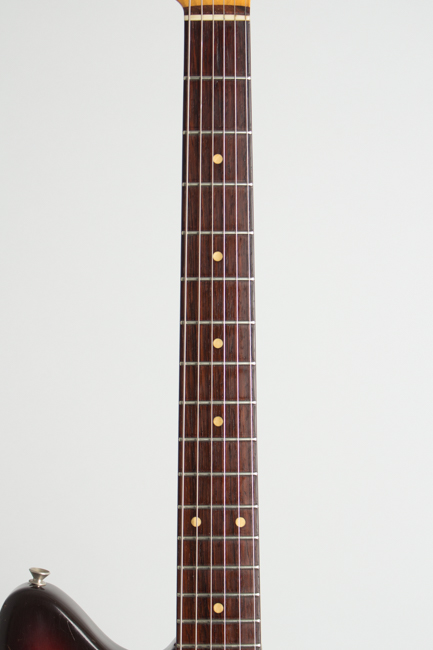 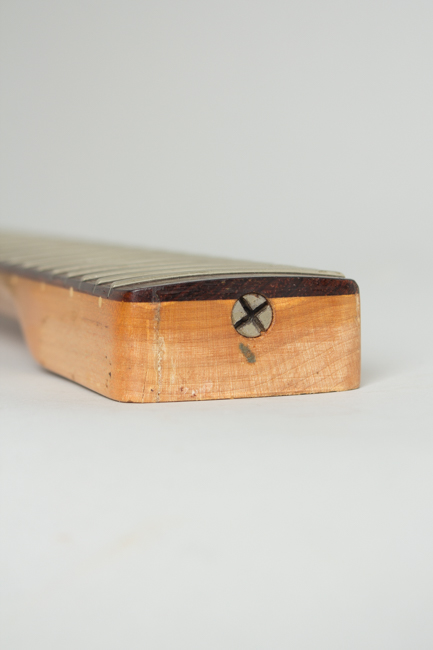 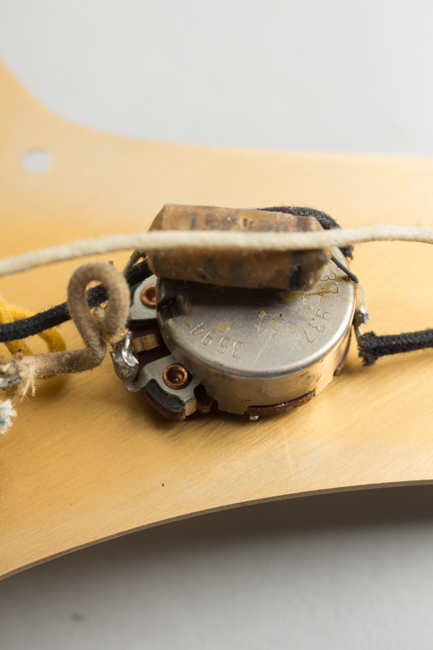 This is a lovely, somewhat played-in, but well-cared for early Jazzmaster, with a beautiful deep 3-color sunburst and the classic gold anodized pickguard used only up through the fall of 1959. There is no date code marked on the heel; pencil dating the neck stopped at Fender in late spring 1959 and was not resumed until the next year. The latest pot code in this guitar is the 37th week of 1959, indicating this guitar was assembled in the fall of that year. This is likely one of the last anodized-guard Jazzmasters made, as that component was replaced with the familiar tortoise celluloid piece right around this time.

When this example was made, the Jazzmaster was still a relatively new model, in production for less than a year as Fender's top of the line guitar. Novel features like the patented "offset" body, rhythm/lead circuit wiring, floating bridge and tremolo, and wider-coil pickups were all news to Fender users, even if they failed to entice dedicated Gibson players to change over to Leo's products. The Jazzmaster was very popular in the early 1960s but faded away as playing styles changed later in the decade.

When this was their new prestige product, the Fullerton factory lavished a maximum of care and effort on Jazzmaster production. We find these first generation "offsets" to be nearly always exceptionally fine instruments. Over the last 25 years or so the Jazzmaster, once maligned, has risen to be one of the most widely played of vintage designs, and this is a wonderful early example. Used but never abused, this remains an exceptional-sounding and extremely attractive twang machine. This particular guitar has a great feel and a lovely "ring" to it, even when not plugged in.

Overall a lovely example, this Jazzmaster has undergone some electronics repair with some of the secondary components replaced but remains original otherwise. The pickups, output jack, and main pots are original, with the pot date codes (137-926 and 137-937) still legible. The upper control area (the rhythm circuit) appears entirely replaced including the switch and laterally mounted mini-pots. This does not affect the sound in any major way, as it only concerns the usually-ignored upper circuit anyway. The main toggle switch is also a correct style later replacement, but the crucial parts of the main lead circuit rig (the pickup, pots, and tone cap) are original and still sound just as they should.

The original sunburst finish on the body has typical dings, dents, and scrapes but no large areas of wear; there is some relatively minor buckle wear and one long scratch into the finish on the back. A few scratches and smaller spots on the top were touched up long ago. The neck finish has relatively little wear, with just the treble edge under the fingerboard worn down to the wood and some minor dings and dents. There is a bit of finish flaking between the tuners, but the Fender logo decal is fully intact. The fingerboard has been refretted with wire slightly larger than the original, but not out of character for the guitar. It is a well-done job and the instrument plays fine.

All hardware other than the noted electronic components remains original. This includes the anodized pickguard, which is SO clean we had to check twice, but it is definitely correct -- the ancient masking tape residue confirms it! It is complete except the chrome bridge cover is missing. While not absolutely original, this is still a very fine Jazzmaster with its sound and character fully intact, still housed in a very nice original tweed HSC. Overall Very Good + Condition.
×