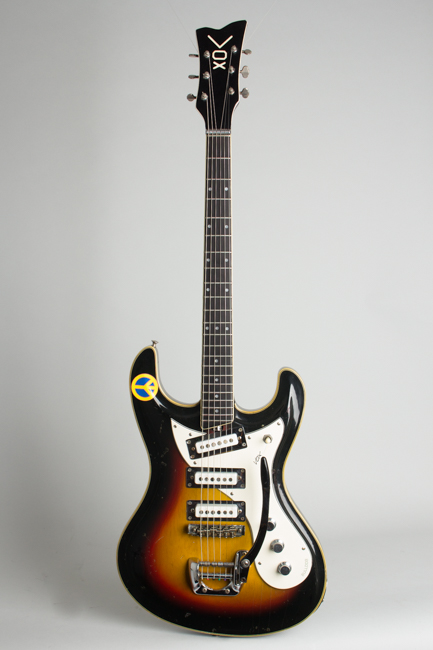 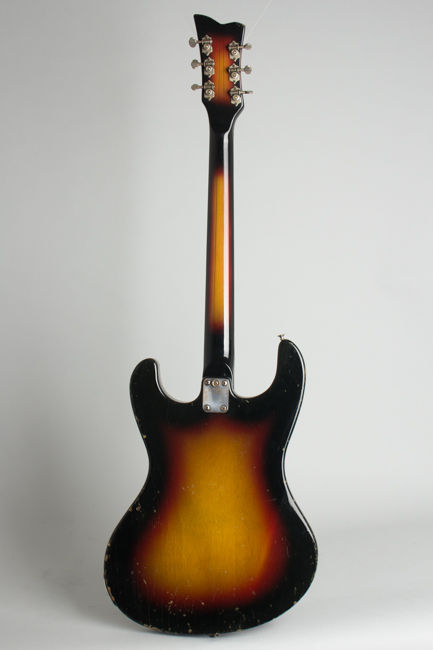 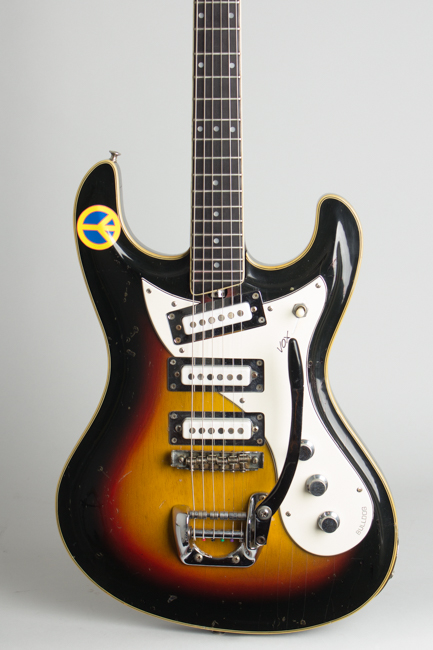 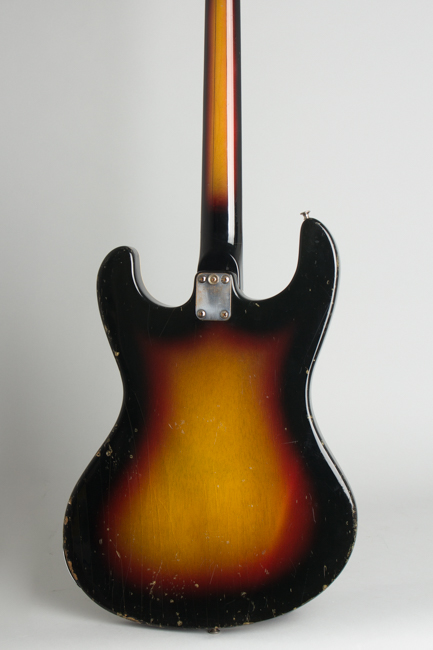 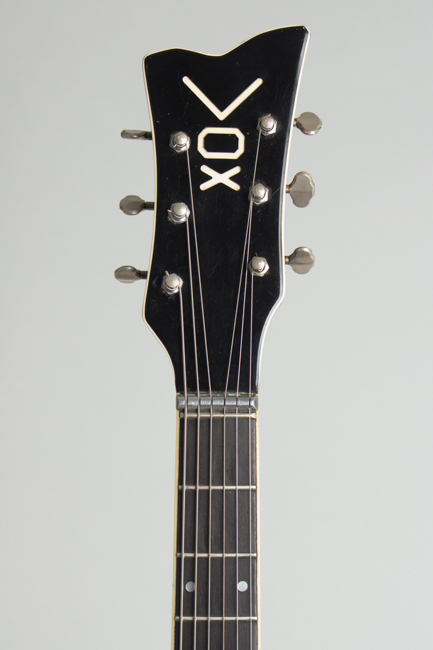 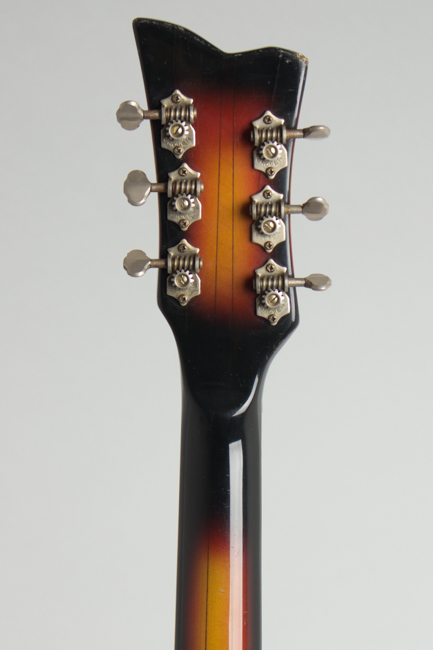 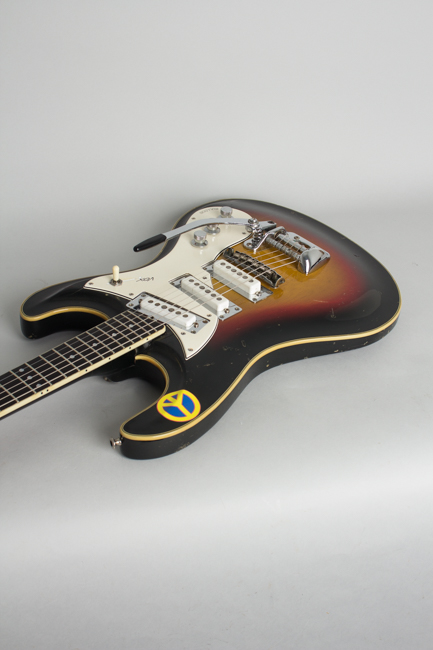 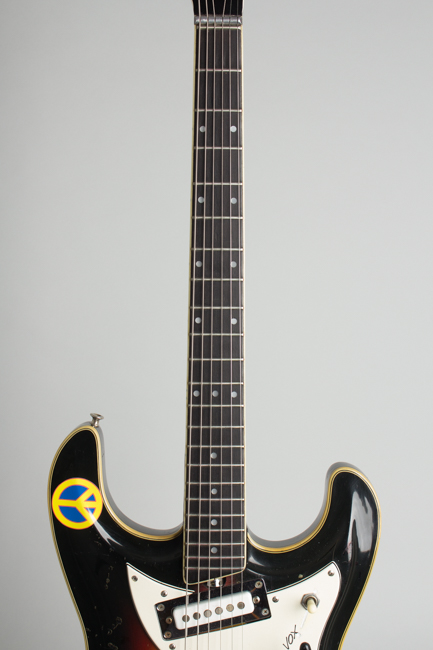 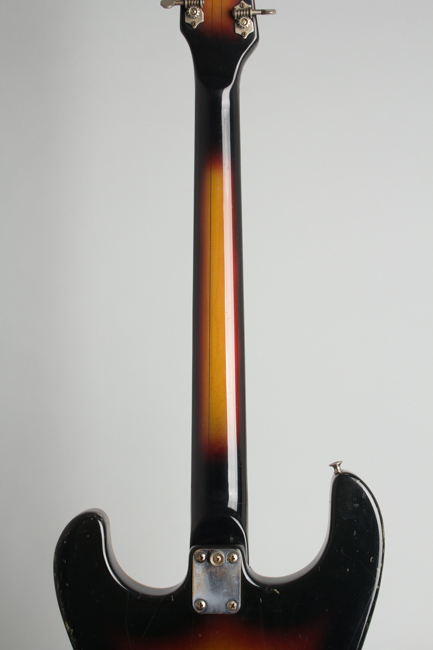 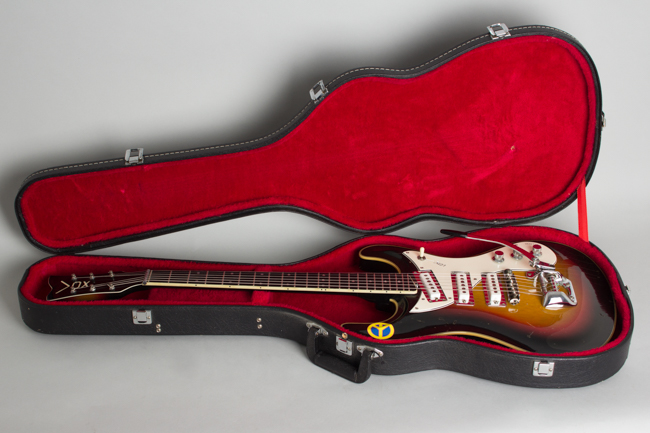 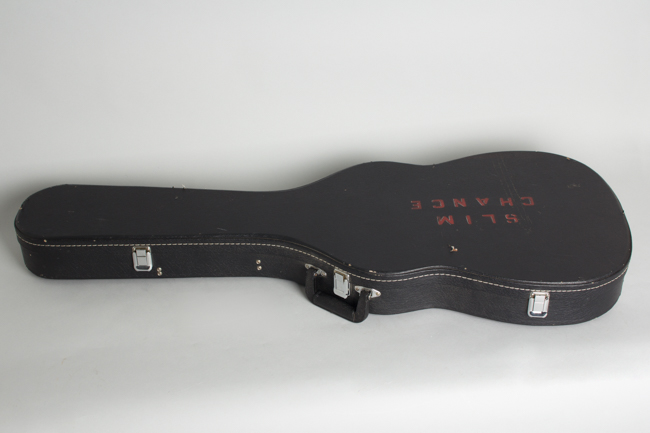 The Vox V241 Bulldog guitar was one of the more quizzical instruments to emerge from the Thomas Organ operation, American distributors for the UK-based brand. This one is a bit worn in but has a super '60s vibe, mostly due to the classic "peace" sticker on the upper body horn. The Bulldog was a US-only model, and owed nothing to any of JMI's original UK designs beyond shared pickups and hardware.

This model was quite obviously styled to capitalize on the popularity of Ventures model Mosrite guitar, a contemporary product of California. The Ventures themselves were unknown in the UK, but Thomas -- ever trend-jumping -- saw a marketing niche unfilled and commissioned Eko, their Italian factory, to whip up something similar. Oddly enough the resulting instrument is in many ways one of the best of the US Vox line, and certainly one of the solidest players.

The Bulldog features a body copied pretty directly from the early "side jack" Mosrite Ventures model (turned upside-down) with a "German curve" carved ledge to the top, bound top edge, and a vibrant polyester three-color sunburst finish. It differs from Semie Moseley's guitars in having three single coil Vox pickups, where stock Mosrites featured two wider-coil units. The wiring originally consisted of a 3-way pickup switch, single volume, and twin tone controls. This one has been more effectively re-wired, which we'll get into in a minute. The Vibrato is the typical Vox unit.

The bolt-on neck has an ebony fingerboard, bound and dot-inlaid with the typical truss rod adjustment at the body end. The vaguely "V"-shaped headstock is faced with a plastic laminate with a large "VOX" logo cut through, and the tuners are US-made Grover Sta-tites. With the three-pickup layout, thicker neck, and larger frets, the guitar's sound and feel are distinctive, even if the look is blatantly derivative!

The 1966 Vox "It's What's Happening" catalog introduced the V241 Bulldog and described it thus: "Ebony finger-board; nickel silver frets; two-way string damper; entire body and neck hand-bound; sunburst." The guitar's hybrid Mosrite/Vox styling stood out even among a sea of other sometimes eccentric Vox models, in a love-it-or-hate-it sort of way.

The 1966 US retail price was $399.90, which was on par with the authentic Mosrite and quite expensive for a solid-body at the time. It seems to have been a decent seller nonetheless, and if not one of the more original 1960s Vox-branded guitars is still a rather distinctive creation.

This guitar has some general wear and internal modification but is a very good player. The body finish shows checking, dings, dents, and scrapes with some heavy chipping along the lower back edge. The neck finish is quite clean, oddly enough. The hardware is original (even the oft-missing trem arm!) except for a missing bridge cover, mute assembly, and a changed selector switch, which leads into the wiring modification.

Originally the Bulldog was wired like exactly a Stratocaster, but with a 3-way lever switch that did not allow any pickup blending. This one has a 3-way switchcraft switch installed set to operate as a standard 2-pickup guitar, BUT the third middle pickup can be blended in or out via the center knob. The other two are master tone and volume. While this is not the original scheme is far more versatile and yields interesting sounds the guitar never had originally.

There is a small scar on the pickguard where the original differently-acting switch lay, and of course that vintage sticker on the upper horn, but otherwise the guitar maintains its original look. While not the cleanest or most original we have had, this Bulldog has a killer '60s vibe and plays very well. The frets are excellent, the pickup options are far more interesting than the original wiring offered, and we'd rate this as a cool player in the "funky but chic" mode. It comes in a '70s Japanese HSC with the logo "Slim Chance" stenciled on the top, almost certainly NOT referring to the late Ronnie Lane's band but enhancing the vibe nonetheless. Very Good + Condition.
×