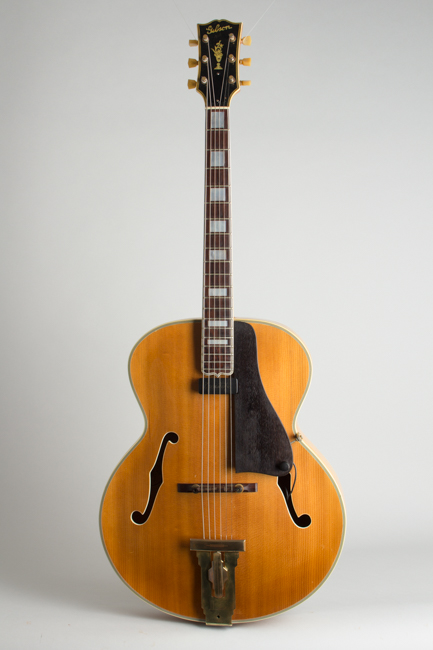 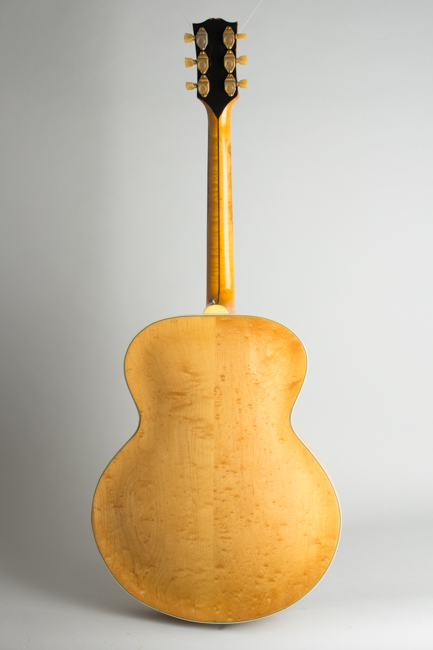 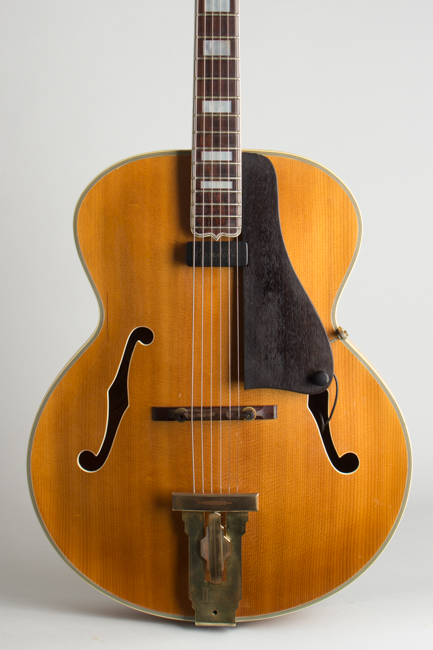 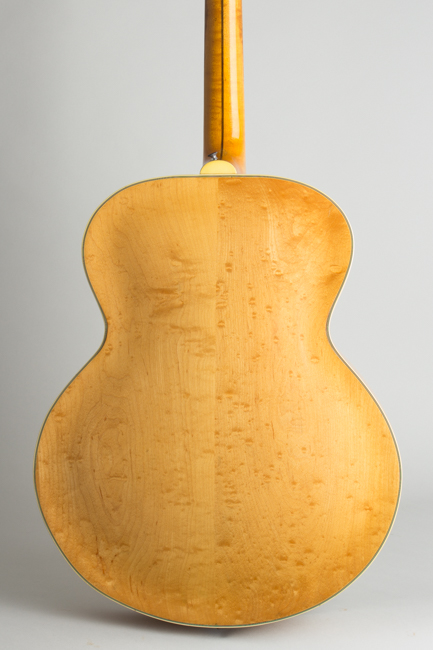 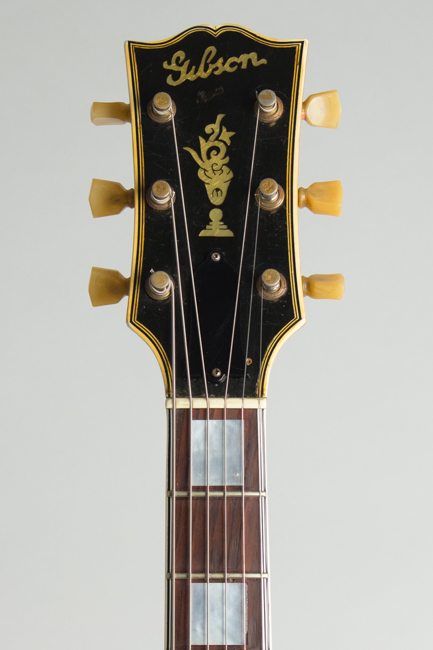 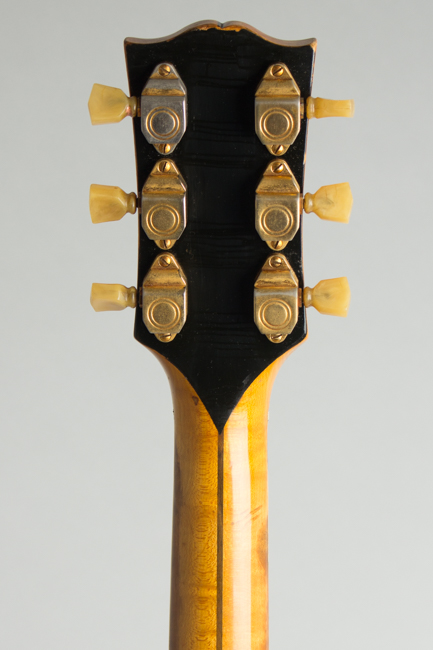 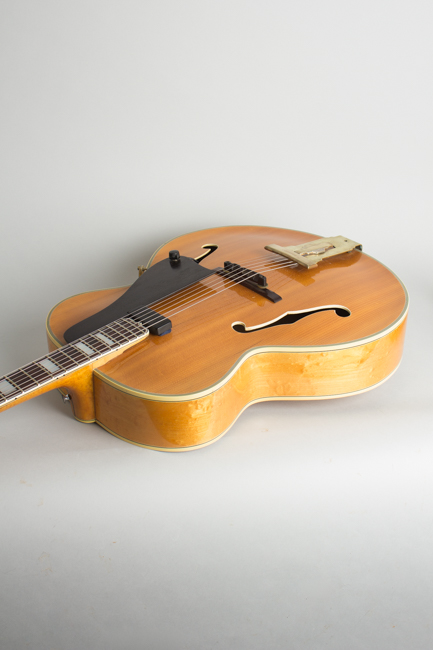 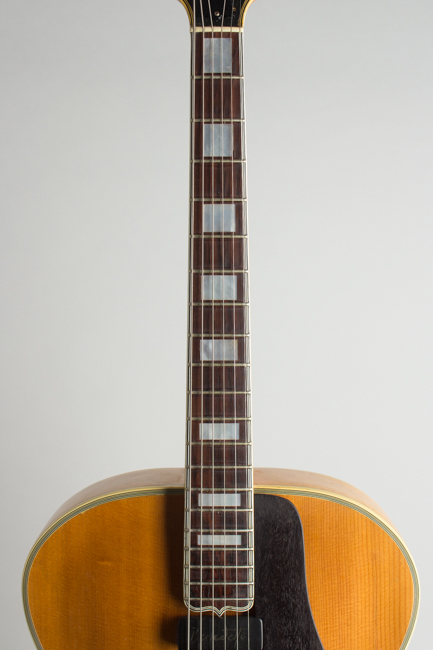 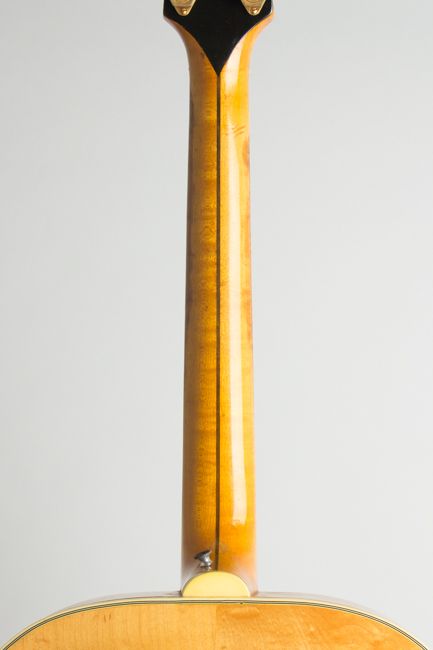 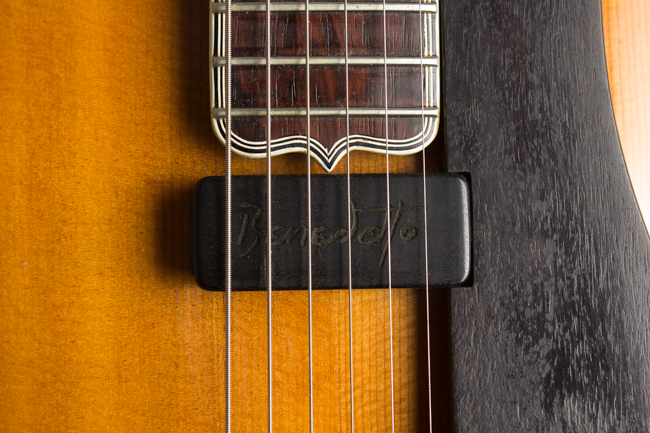 
This lovely just-postwar Gibson is one of only 38 blonde non-cutaway L-5s shipped in 1948, a time that saw the final flowering of the big band era's elegant carved top acoustic guitars. The workmanship on this guitar is to an extremely high standard, as are the woods. Gibson's focus had not yet shifted heavily to electric instruments, and this fully carved acoustic arch-top guitar was considered the company's most important professional product. While the guitar shows signs of use and has had a later electric rig added, it still remains true to its original character, able to drive a big band or purr a delicate chord/melody arrangement with equal aplomb. Although the 18" Super 400 was the official top of the line at Gibson, many players have preferred the 17" L-5 and it is usually considered the classic Kalamazoo f-hole guitar.

The early "Artist" serial number indicates this L-5N was shipped in the summer of 1948, and it has a combination of features specific to that exact period. The headstock still features the old 1930s script logo that had been discontinued by Gibson and replaced with the then-new, now-familiar block logo. This may simply have been one of the last of the old pre-WWII headstock veneers getting used up! The tuners are gold-plated Kluson Sealfasts with translucent celluloid "keystone" buttons, a feature in place since 1940. The multi-bound, pearl-block inlaid fingerboard is made of Brazilian rosewood, a feature only seen on L-5s from 1948-9 when Gibson apparently suffered a shortage of ebony.

The multi-bound top is carved from bookmatched tight-grain spruce highlighted by natural finish that has aged nicely to a lovely amber hue. The guitar's back is made from a lovely piece of burled maple that looks almost like bubbles floating in champagne. All edges have multiple celluloid bindings using alternate black & white layers. The floating Benedetto pickup is mounted on an ebony wood pickguard, with a volume control at the lower tip using an old Supro knob!

This L-5 has a distinguished history -- it was for some years a gigging and recording instrument for Jon Sholle, a truly wonderful musician, fixture on the New York traditional music scene, and friend to many players over generations. During a 40+ year career, Jon worked with many fantastic musicians including Vassar Clements, David Grisman, Peter Rowan, Tony Rice, Larry Campbell, Keith Carradine, Bela Fleck, Melissa Manchester, Maria Muldaur, Kate & Anna McGarrigle, Ester Phillips, Pee Wee Ellis, Sonny Stitt, and Bette Midler. In 1964 at age fifteen, he recorded for Folkways Records with Roger Sprung's "Progressive Bluegrassers" then went on to win "World Champion Guitar" at the 1967 and 1968 Union Grove Fiddler's conventions in North Carolina. In 1969, Sholle played on beat poet Allen Ginsberg's 1970 LP "Songs of Innocence and Experience", a musical adaptation of William Blake's poetry collection.

From 1984 to 1986 he was a member of the David Grisman Quintet, featured on their album "Acousticity" which made No. 6 on the Billboard Jazz chart. Sholle recorded two critically acclaimed solo albums for Rounder Records, "Catfish for Supper" and "Out of the Frying Pan" and compiled and annotated the LP "Rounder Bluegrass Guitar". He was featured on Andy Statman's 2011 Shefa label release "Old Brooklyn". Sholle appeared in the 1979 film "The Rose" as a member of Bette Midler's band, and both on-screen and playing on the soundtrack for the Peter Bogdanovitch-directed Audrey Hepburn movie "They All Laughed". He appeared in several Broadway shows, including "The Best Little Whorehouse in Texas" and "Big River". This L-5 was his "swing guitar" and was set up to be equally effective whether plugged in or not.

When interviewed by Rolly Brown in "Flatpicking Magazine" over 20 years ago, Jon talked about this L-5: "And, for swing and jazz, I use an older L-5 fitted with one of those Benedetto pickups. It's a good, easy playing guitar. I got it in a trade for that guitar that's on the cover of 'Catfish', a Gibson Super 400 that had been re-topped by Jimmy D'Aquisto. I got what I felt was a better playing guitar, although the other guy may have gotten a more valuable guitar."

This is a great playing example of Gibson's all-time classic carved top guitar, as used by a great player! One can see the guitar has been used quite a bit but also very well-cared for. It remains generally original except for the addition of the handmade Benedetto pickup and the wooden pickguard it is attached to; probably by Bob himself. The tuners, bridge, pickup bracket, and tailpiece are original; the tailpiece end was drilled out slightly for an endpin jack. The tailpiece has lost 95% of the gold plating but is otherwise intact, including the "top buster adjustor" tension bar mounted under the back end.

There is finish wear from play on the back of the neck but no deep marks or gouges; there is a thin overspray over the old rubbed-down areas. The rest of the finish does not show much play wear at all. There appears to be an old and unobtrusive clear lacquer overspray over much of the instrument, possibly done when a couple of grain cracks were repaired in the spruce top. One is by the bass side waist, the other runs forward from the treble side waist; both are well-sealed.

The truss rod cover is later, and there are a couple of small holes in the headstock veneer adjacent to it indicating something -- most likely a Van Eps String Damper -- was once fit there. There is some minor pick or fingernail wear in the top of the ebony pickguard. A vintage Gibson strap button has been added at the heel.

The guitar has been recently given an expert refret and playability is excellent. Acoustically it is both powerful and smooth, with a wider dynamic range then some large-body archtops. Plugged in, the Benedetto pickup sings with the classic warmth they are known for without losing clarity. This is simply a superbly classy instrument with a great pedigree, a splendid example of a late swing-era L-5, and an excellent-playing and sounding guitar. It is housed in a later HSC. Overall Excellent - Condition.
×