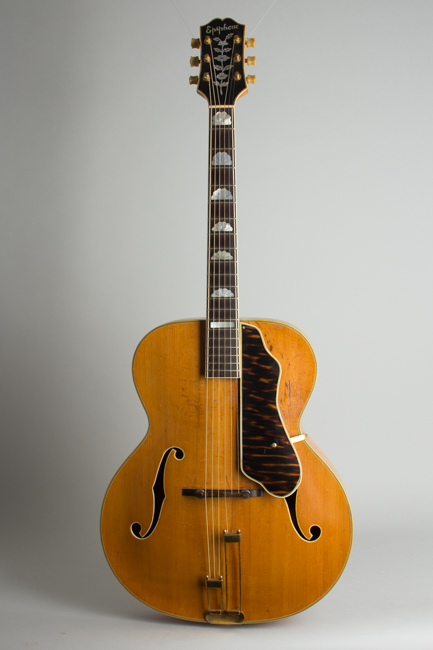 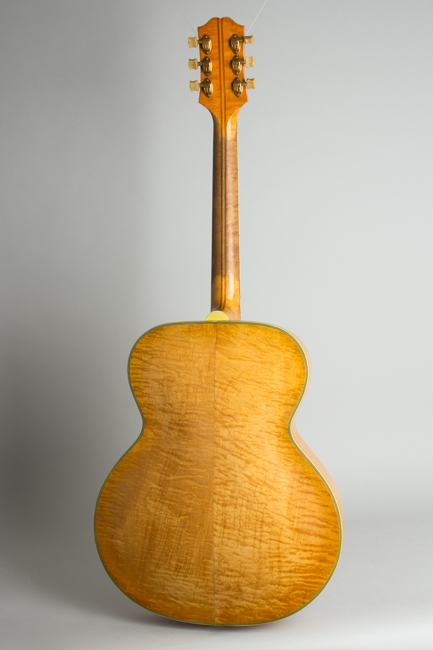 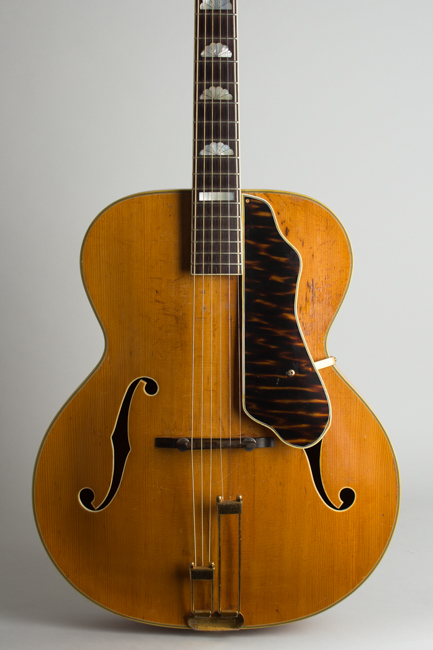 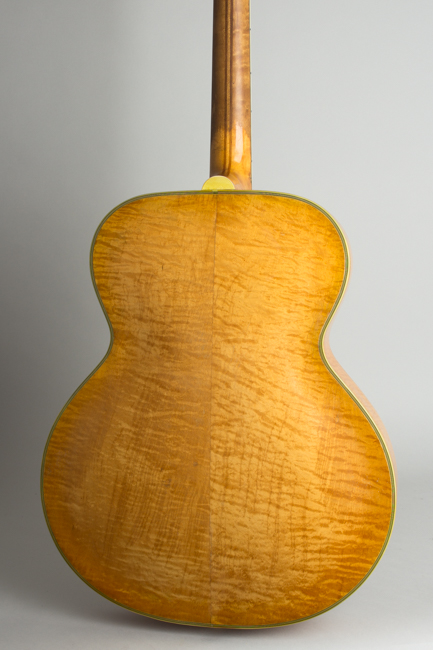 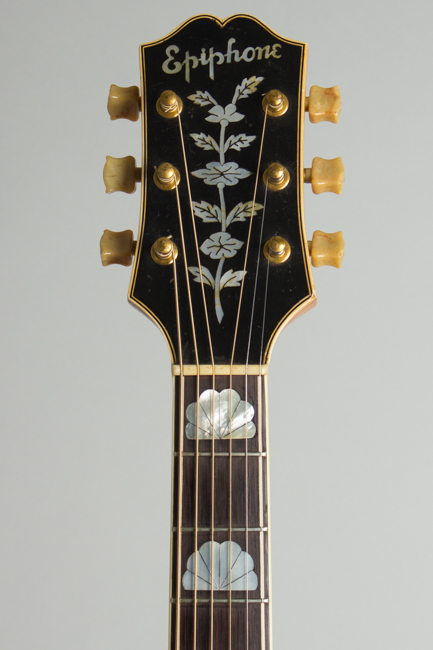 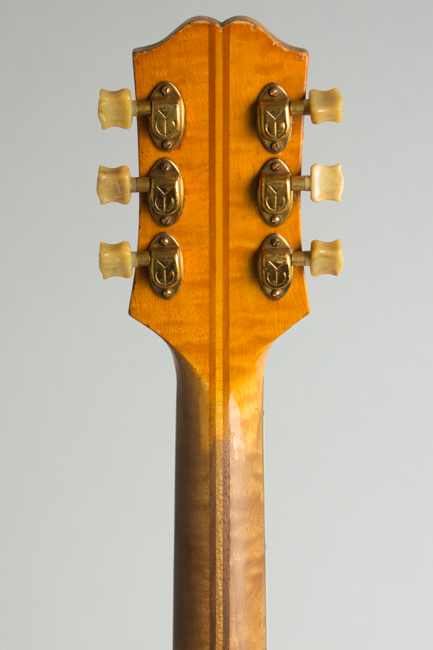 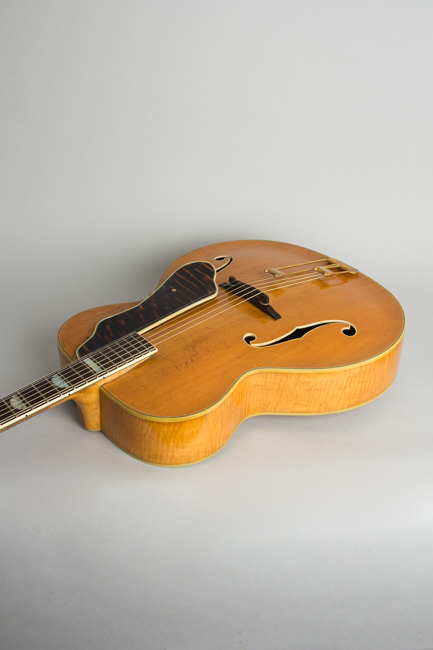 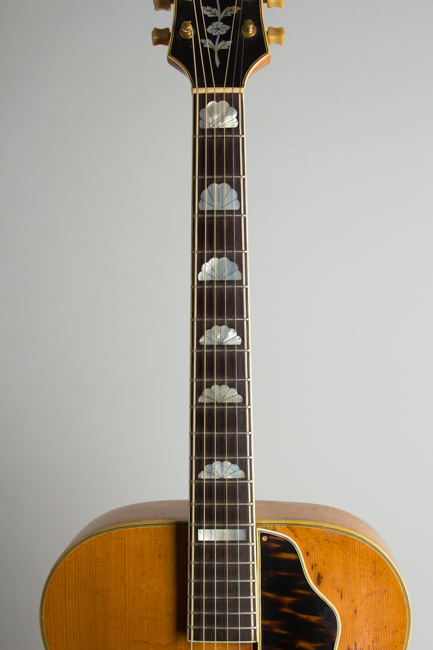 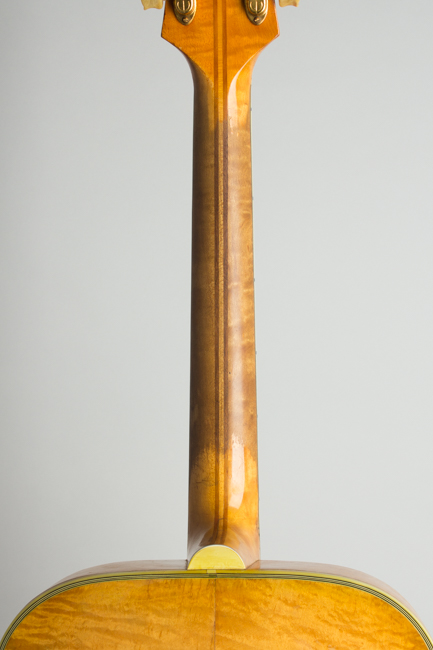 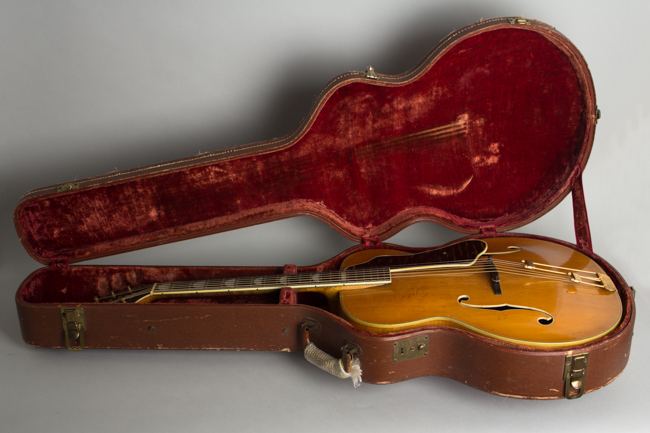 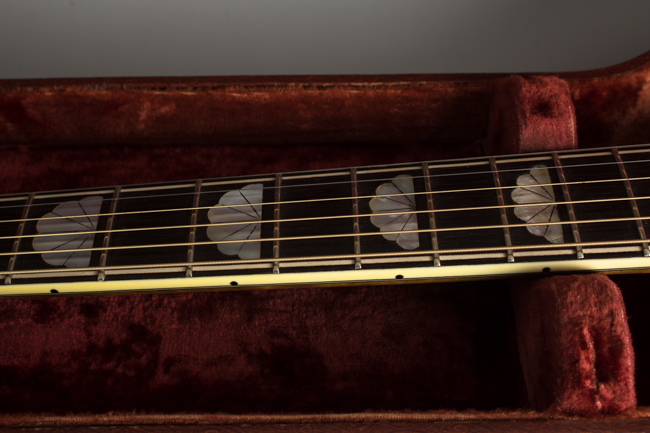 This guitar is a well-worn but fine-playing example of a "second generation" pre-war Epiphone DeLuxe, one of the classic orchestra guitars of all time. The Deluxe had been Epiphone's original top-line guitar, until the Emperor was introduced in 1936. This enlarged 17 3/8" version of the DeLuxe was developed at the same time as a response to arch-rival Gibson's "Advanced" arch-top line. This DeLuxe dates to early 1940, likely from the first batch made that year. It is a very early example of the new natural finish model which had just been introduced sometime in 1939, which was the hot trend in orchestra guitars at the time.

At the time this guitar was made the Stathopoulo family maintained their guitar building operation on the second floor of a large loft building on West 14th street where Epiphone, Inc. operated an integrated factory and showroom in the heart of swing-era New York. The Deluxe and the even larger and fancier Emperor competed directly not only with the Gibson L-5 and Super 400 but individually built creations from John D'Angelico (about 20 minutes walk downtown), Willy Wilkanowski (a subway ride out to Greenpoint, Brooklyn), and Charles & Elmer Stromberg (a few hours north in Boston).

The Epiphone company was named for and headed up by Epaminondas ("Epi") Stathopoulo until his death in 1943. By all accounts he was an extremely fastidious and dedicated man, who personally inspected every instrument. All high-end carved-top Epiphone guitars are fine instruments, but those produced under Epi's watch are among the very best and were often preferred by the era's top players to anything else available.

This 1940 Deluxe is an example of the more refined, "perfected" swing-era version, larger and sleeker than the original 1931-style "Masterbilt" style. The 5-piece laminated neck is slimmer than older models, with a profile halfway between a "C" and "V". The bound rosewood fingerboard has the "segmented cloud" pearl inlay that would be simplified after the war. The bound headstock has the fancy "tree of life" pearl inlay on the face that was an Epiphone trademark. The peghead is also fitted with the new specially made heavy-duty Epiphone branded tuners that had just been introduced a few months earlier, plated in gold.

The 17 3/8" wide body is bound in 5-ply celluloid and the finish is a ambered natural lacquer showing off some fairly deep curl on the maple back. The tailpiece is Epiphone's patented "Frequensator" with separate tines for the bass and treble strings. The pickguard is an extended bound celluloid piece shared with the Emperor, secured by a simple gold-plated bracket.

These original high-end arch-top Epiphone guitars were quite popular among professional users when new, but nice examples are surprisingly hard to find today. The sound is both rich and powerful, still retaining the definition old Epiphones are known for. We are always pleased to offer top-line New York Epiphones, especially pre-war ones. They are not only great guitars, but a huge part of our local NY musical heritage.

This is a very well played guitar, but also well cared for with a spectacular sound. There is general wear to the original very thin lacquer including dings, dents and scrapes over much of the instrument. The most visible are to the top; some of these in the area around the pickguard have turned a darker shade, likely as a result of reaction to celluloid out gassing from the original 'guard. The finish on the back of the neck is heavily worn down to the wood and has a similar feel to an old Fender neck; it is maple after all!

The back seam has been resealed, as has some of the laminate at the heel. A tiny piece of binding under the heel is patched in. There are small holes on the top side of the fingerboard extension attesting to a previous DeArmond pickup installation, and some residual marks to the top. The Epiphone tuners and Frequensator tailpiece are original; the tailpiece seems to have escaped ever having had the common repair at the bend. The dark rosewood bridge is a more recent style, while the pickguard is a correct style later reproduction that has shrunken and warped upwards a bit, just like the originals.

The guitar had a neck set likely some time ago, and the angle is excellent. There is one long (and long-ago repaired) top grain crack under the treble side of the bridge. The frets are the original '40's style small wire but this is likely an old refret. Playability is excellent and this is one of the best sounding swing era guitars we have had in a some time. It resides in a period, possibly original but not Epiphone-marked brown Ess & Ess hardshell case. While somewhat worn in this prewar DeLuxe is real treat to play and see for the vintage archtop fan, and a great sounding guitar for many styles of play. Very Good + Condition.
×