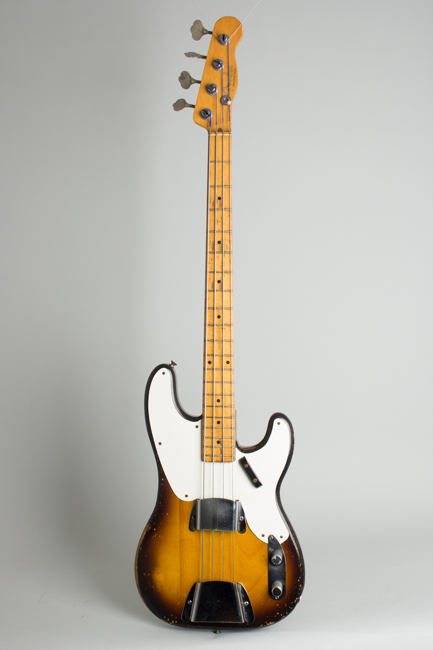 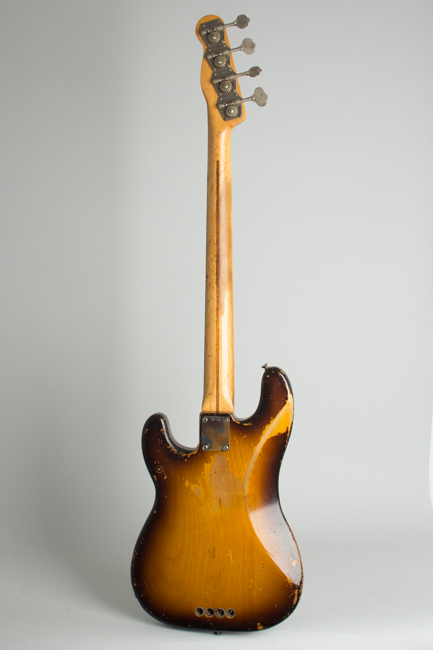 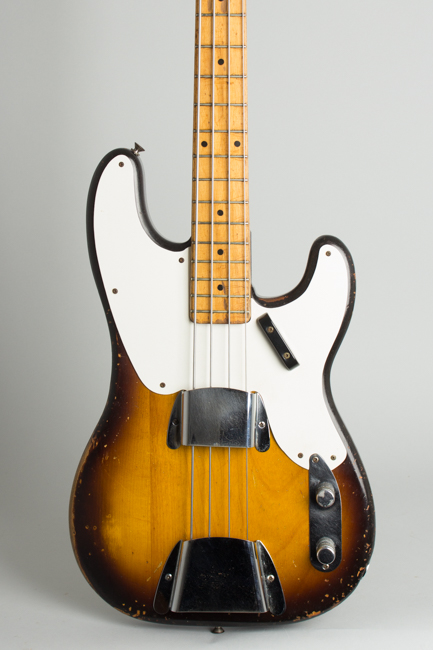 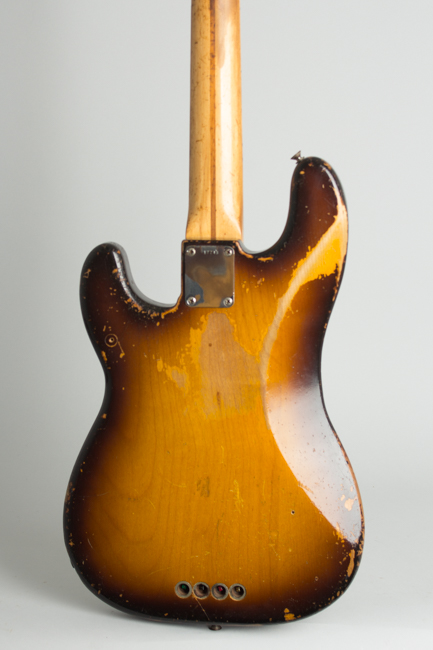 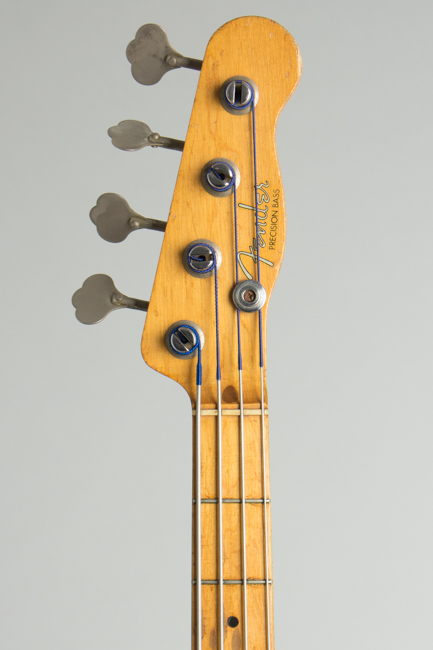 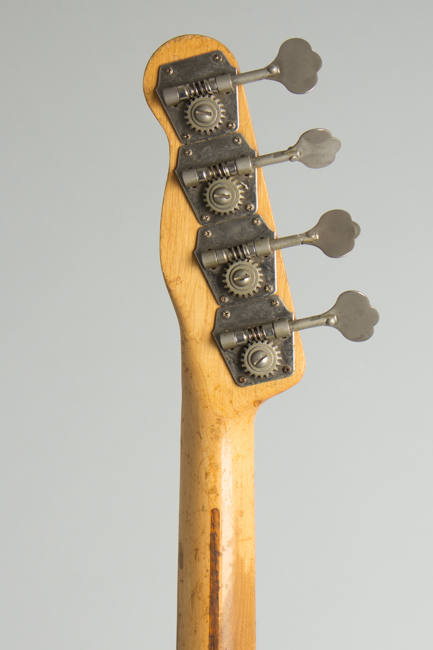 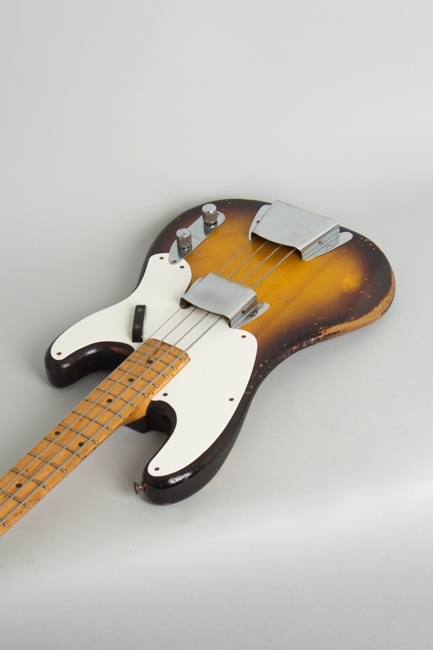 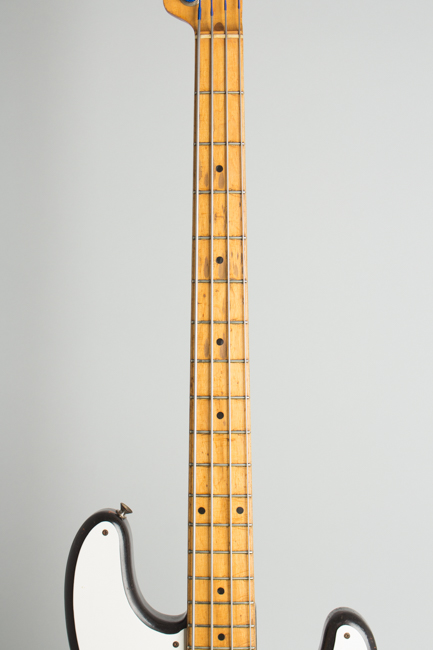 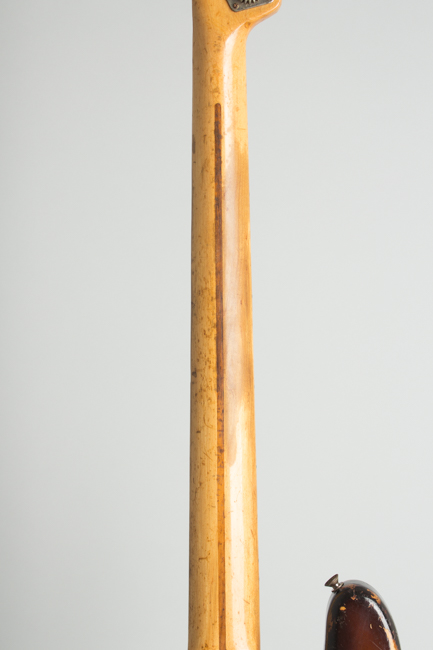 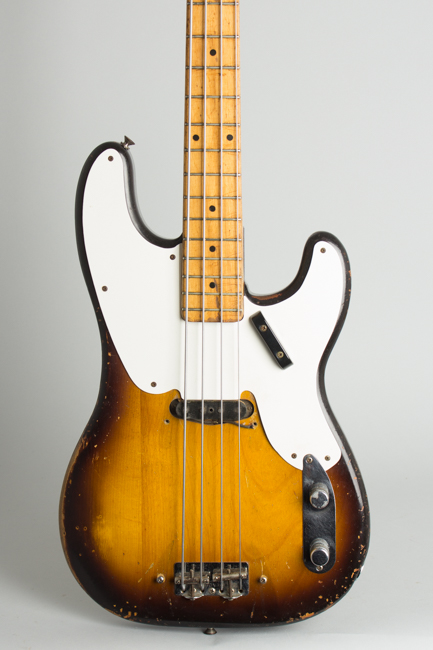 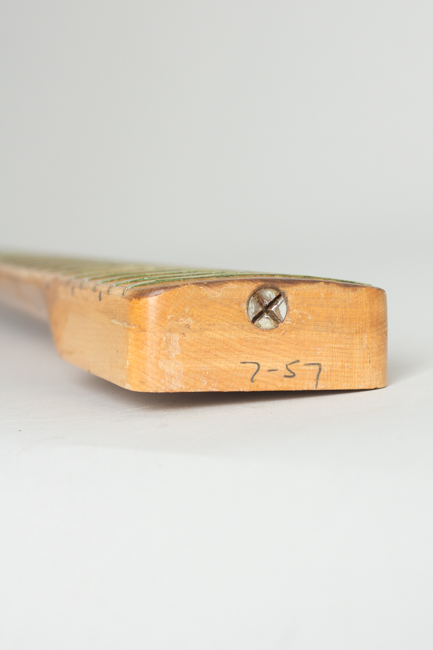 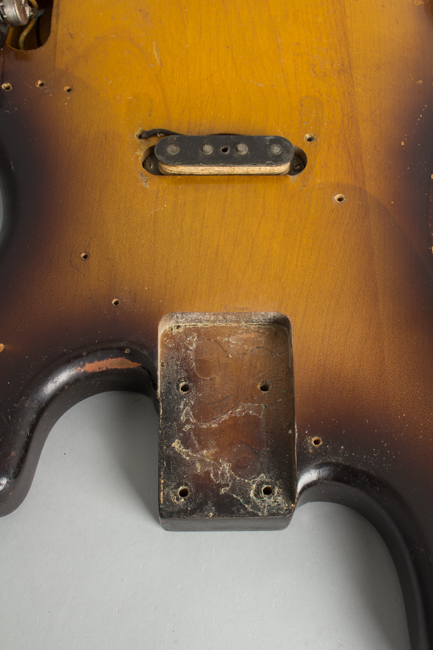 This is a well played but nicely original example of one of the very last "second generation" Fender Precision Basses, the instrument that took the electric bass from curiosity to everyday tool. By the summer of 1957 when this bass was made, the Precision had begun to shed its original "baritone Telecaster" look introduced in late 1951 and take on characteristics of the newer Fender Stratocaster. The body is "comfort contoured" instead of the earlier slab style, and the finish is the two-tone sunburst introduced on the Strat. The neck date on this instrument is 7-57; that same month Fender exhibited the new upgraded Precision at the summer trade show. Production then shifted over to the "new" Precision Bass with a split two-coil pickup, larger headstock and anodized aluminum pickguard soon after, making this a swan song example of the original style.

This bass has mostly typical features of older 1955-6 Precisions including the original single-coil pickup, single layer plastic pickgurd covering the upper half of the body, 2-saddle bridge strung through the body and smaller "Tele" style headstock. Newer features include the flat-top knurled knobs and the plastic fingerrest "tug bar" mounted on the pickguard. This is mounted with two screws in place of the old single-screw wooden piece. This was a new enough idea the pickguard still has the vestigal single center hole underneath, along with the two screw holes used. There is no corresponding hole in the body, confirming the originality of this fitting.

The one-piece maple neck is slimmer and less round-backed than earlier 50's basses with a "V" contour typical of 1957. The serial number is on the neckplate, where it had migrated from the bridge base a year or so earlier. The body is a beautiful piece of ash -- Fender would shortly substitute less expensive alder as the body wood on the sunburst instruments like this.

All early style Precisions are comparatively rare; in recent decades ex-Police front man Sting has used a Precision Bass nearly identical to this one (with the pickguard removed) extensively, so some now refer to this variant as the "Sting" model. This is an extremely comfortable and great-feeling instrument, one that has obviously been played and enjoyed by generations of bassists! Most recently it was in the collection of Steely Dan founder Walter Becker, who was originally the band's bassist and always kept an eye and ear out for a great 4-string.

This bass shows a decent amount of wear overall but remains nicely original, with no notable alterations and the sound and character one would expect delivered in spades. The thin lacquer is beautifully weathered with typical play wear overall including dings, dents, and finish rubbed off the body edges in all the usual places. There is a decent amount of belt buckle wear to the back, and the chrome plating on the neckplate is mostly worn away. There are a couple of small screw holes in the back; this bass may actually have been fitted with the semi-mythical "Fender Go-Around Waist Belt" long ago! The fingerboard has numerous spots of wear through the lacquer, while the back of the neck has a lot of lacquer worn away mostly on the bass side with that perfect "old Fender" feel.

All parts are original, including the original pickup which -- unlike many -- does not appear to have been rewound. A couple of solder joints do look to have been touched up; the volume pot is a bit finicky, and some work had been done in this area. The chrome bridge and pickup covers are intact; some of the original mute foam even remains under the tailpiece. The screws securing that piece are old but not original. The frets have some wear and are lower than they once were; the bass still plays well, but some would elect to have it refretted before too long. It is currently strung with flatwound strings both for sonic reasons and to preserve the fretwire. We can refret with a choice of wire if desired. This is a fantastic bass as is; a superb-handling instrument with a bright and powerful sound that mellows down beautifully with the very effective tone control. Overall Very Good + Condition.
×