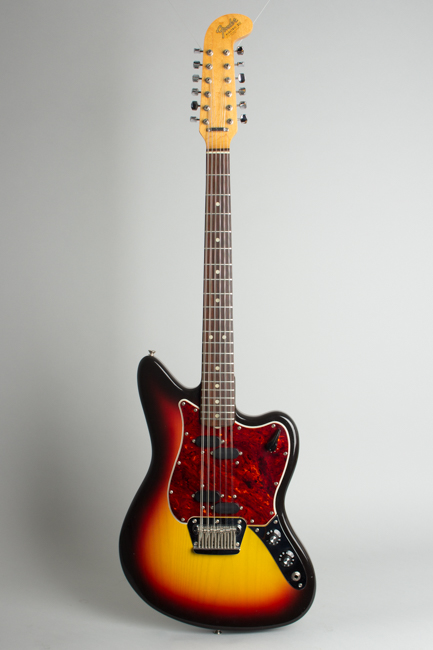 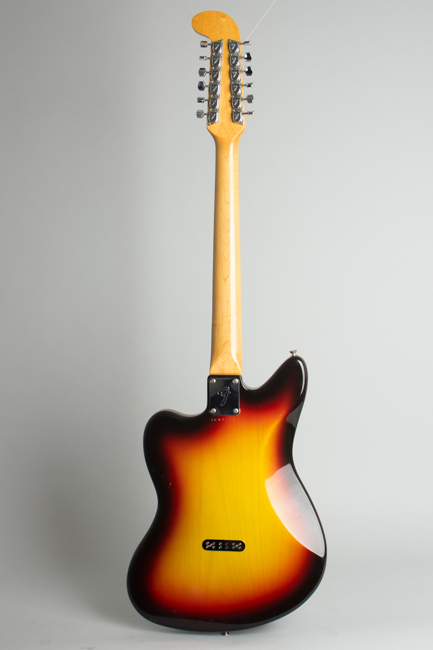 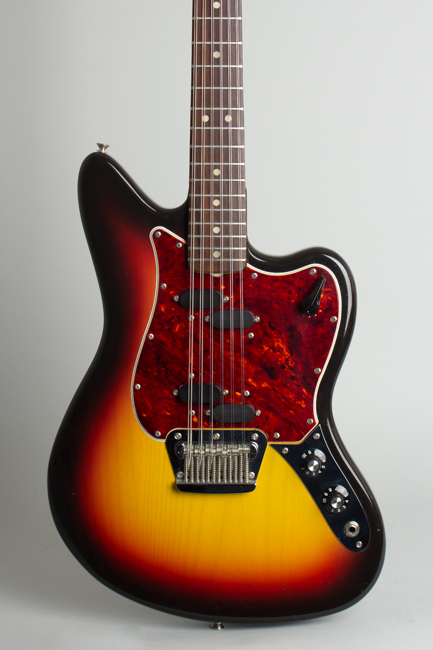 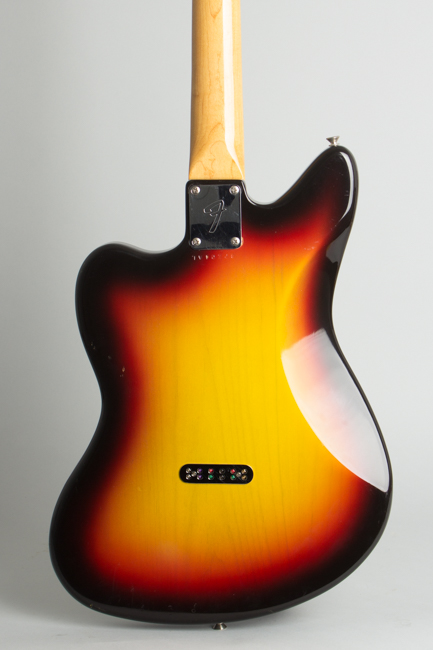 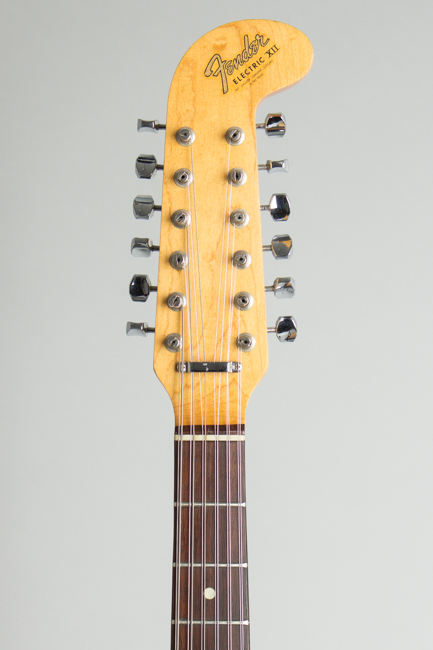 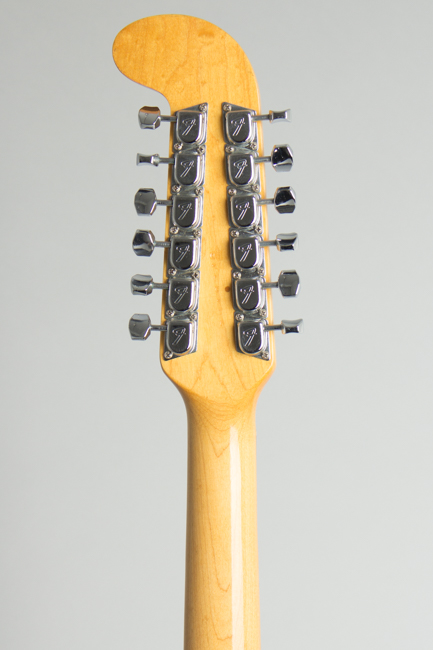 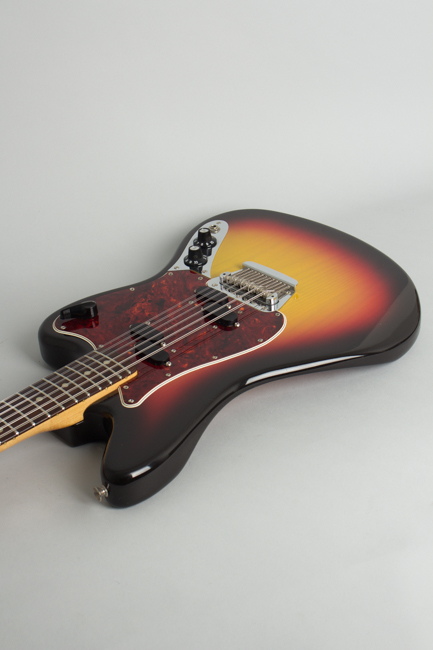 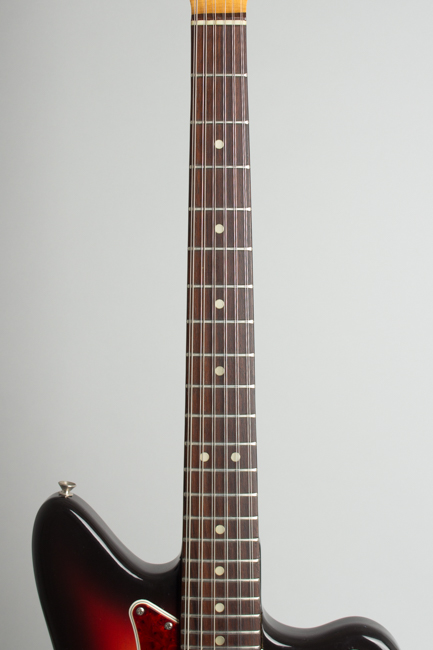 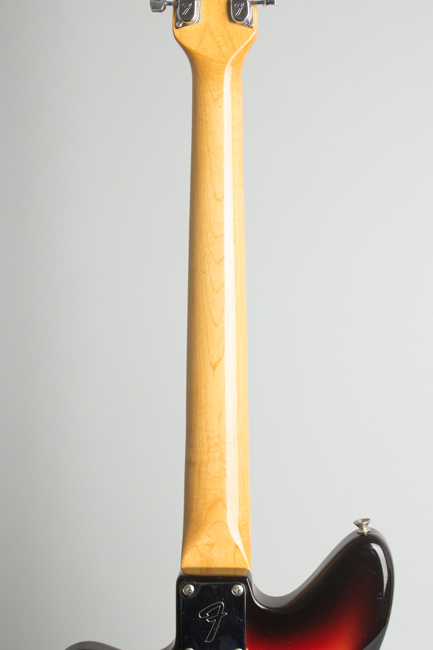 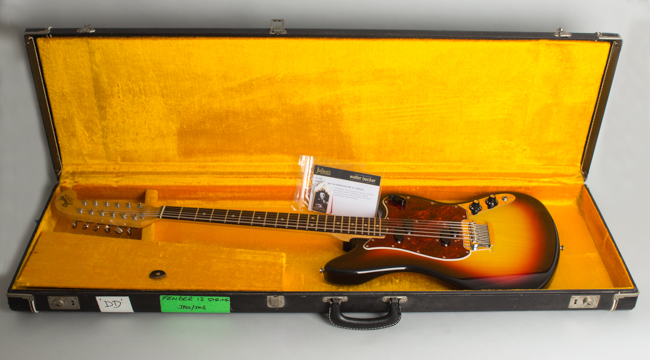 This is a special example of the Fender "Electric XII". How do we know? Well, it says so! The guitar is marked with "Special" in block letters stamped between the tuners on the back of the headstock and on body heel just below the serial number plate. The plate itself is also very unusual. It is the standard early CBS/Fender piece with the large "F" logo on the back but has NO serial number stamped into it. We have seen a number Fender instruments built as artist presentations or show samples, they nearly all bear serial numbers so this deliberately un-numbered guitar is certainly an interesting oddity. We don't see any non-standard features, but may have been assembled for some promotional purpose lost to history.

The early CBS era at Fender was a time of transitions, oddities and experiments in general. Special instruments like this were generally made up for trade show display, or sometimes as artist models for the large pool of endorsers the corporation engaged. At one point the CBS brass insisted all Columbia records artists be photographed posing with Fender product, leading to some interesting results like the infamous Bob Dylan Jazz Bass photo. While we don't know where this "Special" Electric XII may have started out, we do know it later became part of Steely Dan founder Walter Becker's collection for a time.

If the Electric XII is not one of Fullerton's best-remembered creations it remains a superbly engineered, great-sounding and extremely practical guitar. Introduced at the 1965 NAMM Show at the dawn of the CBS/Fender era the Fender 12-string married the popular Jaguar/Jazzmaster style body to a new 12-string neck with a distinctive extended "hockey stick" headstock. The neck itself is typically Fender; slim and very comfortable. These are often considered about the easiest-playing electric 12's ever made.

The electronics are unique with two pickups each with two separate coils, as pioneered by the Precision Bass, mated to a 4-way selector allowing different phase combinations. The bridge is a marvel of Leo Fender's engineering with 12 graduated intonation-adjustable saddles and often considered the best unit of its kind. This "Special" guitar carries a neck date of April 1966, the year the great majority of Electric XIIs were made. Perhaps it went to the NAMM show in June that year, or one of the many Teen fairs Fender sponsored that summer.

With all this original engineering, Fender missed the boat a bit on the electric 12-string fad and by the time the "Electric XII" was ready to market Rickenbacker had already reaped much of the benefit of the Byrds' and Beatles' popularization of the sound. The Fender XII is also a very fine design and an excellent-sounding stage or recording instrument, albeit without exactly capturing the Rick's trademark jangle. Led Zeppelin, the Velvet Underground, The Move, The Kinks, Herb Alpert's Tijuana Brass, the Baja Marimba Band, and many others made many classic recordings with it, perhaps its full potential is still untapped. Walter Becker thought it worth having anyway!

This is not only just about the cleanest but also the best playing and sounding Fender XII we have had with a dead-straight neck and virtually no fret wear. It is housed in an old but not original Fender rectangular black Tolex case (it looks like a 60's Jobber bass case) with the Steely Dan studio storage markings on the side. Excellent + Condition.
×