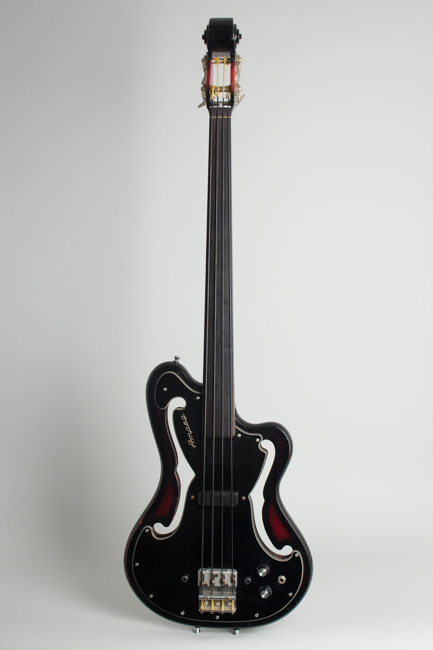 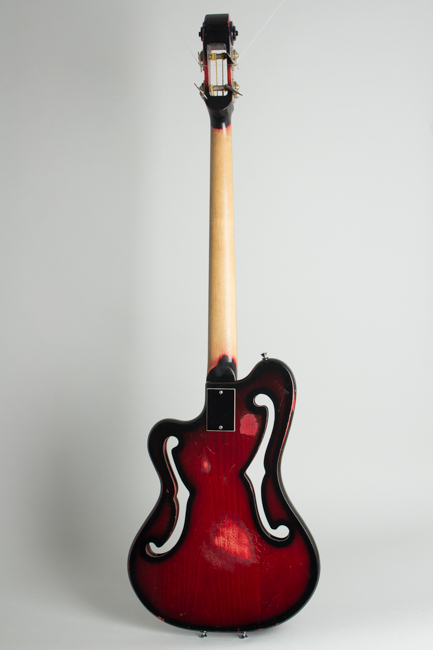 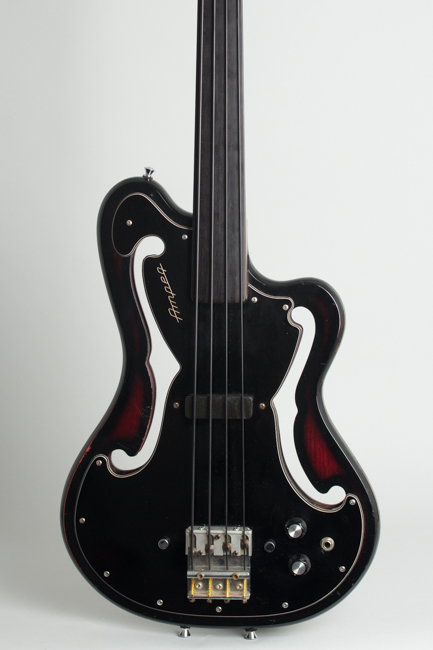 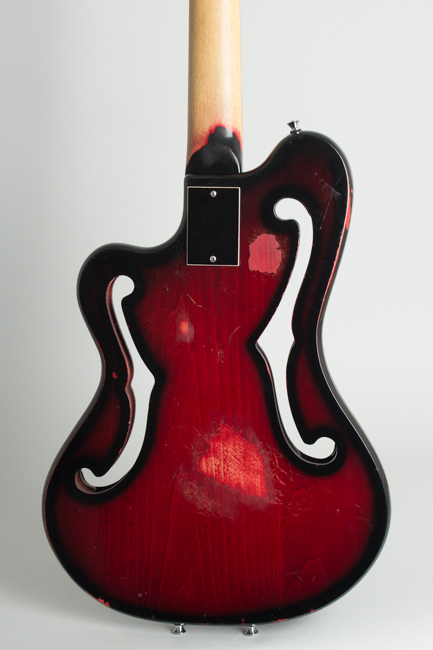 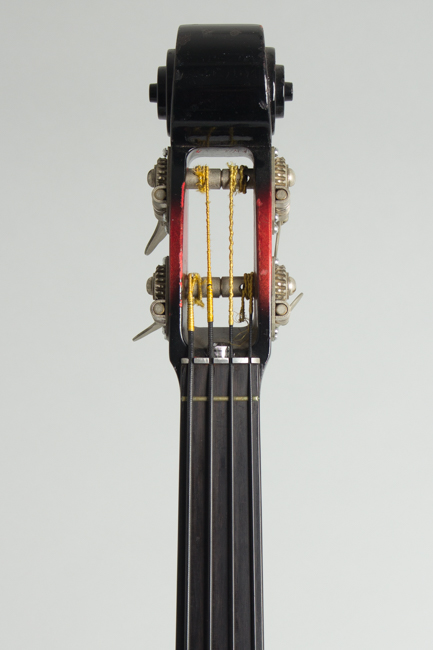 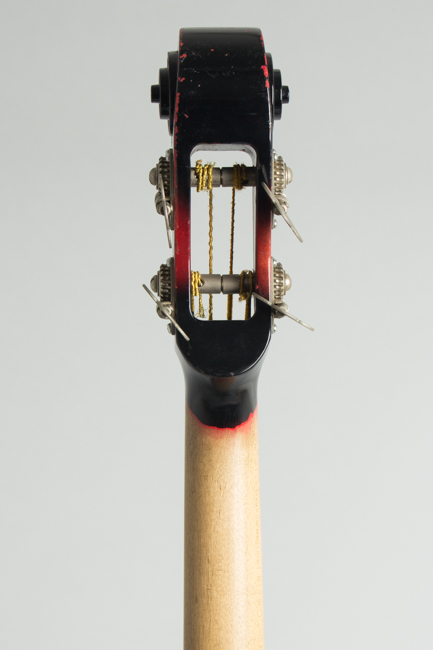 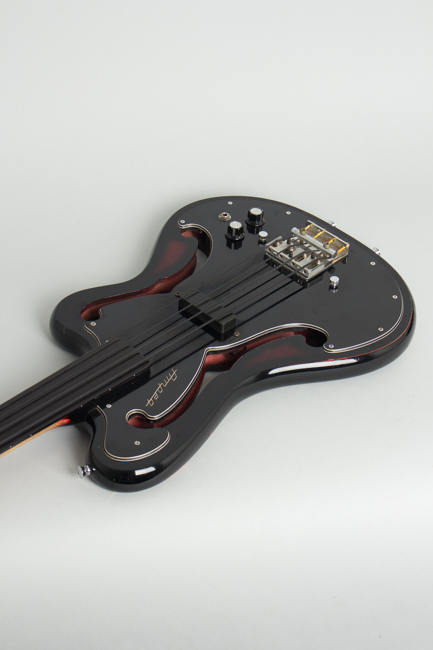 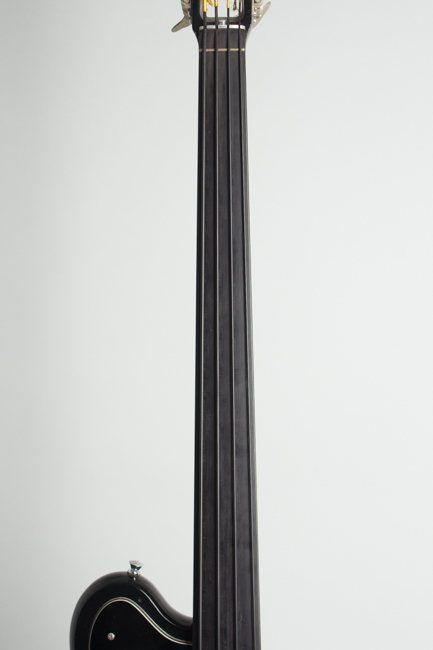 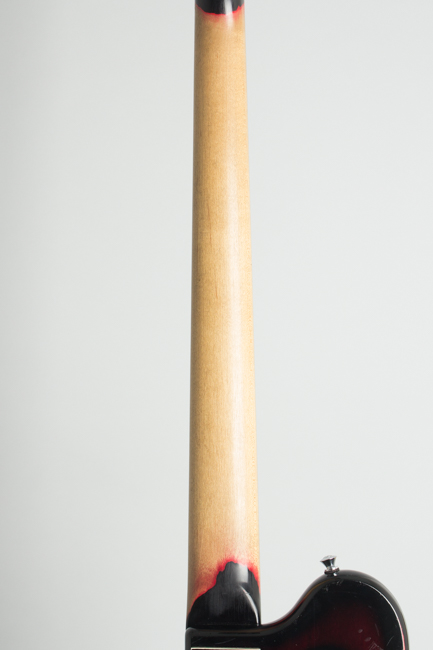 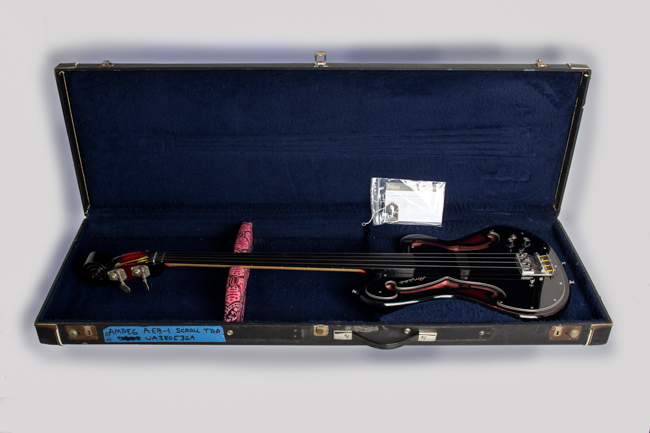 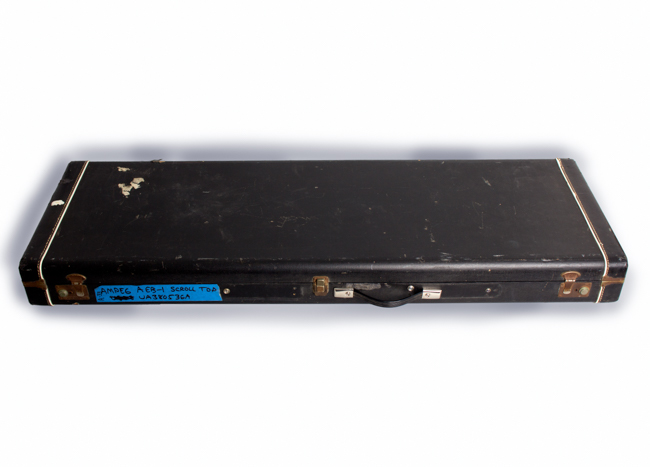 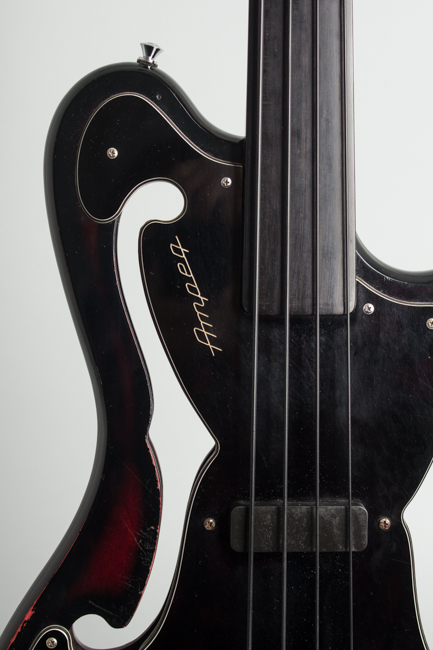 This is a great-playing and sounding original example of a relatively rare instrument: the Ampeg AMUB-1 (Ampeg Magnetic Unfretted Bass #1), the second version of the first production fretless bass guitar. The specifications are typical for the 1968 second series Ampeg models, and rather different from the first 1966 versions. The major change is the bridge and pickup construction, both redesigned to make the instrument more practical for the high-volume music of the late 1960s than the original design, which was aimed at players weaned on the upright bass.

The Ampeg basses of the 1960s were the product of company founder Everett Hull's personal distaste for the Fender-style bass guitar...he considered the upright bass to be the only legitimate low end instrument! The 1966 Ampeg "Horizontal Bass" was designed to utilize the same vibration-activated "Mystery Pickup" (located under the bridge) as the upright Baby Bass, allowing the use of gut strings as well as steel-core for more traditional bass sounds. It was initially offered in fretted and fretless models designated the AEB-1 and AUB-1.

In the higher-volume playing environments of the late 1960s, this design proved impractical as the pickup was inefficient and unfortunately microphonic. After Hull sold the company to Unimusic in 1967, the instrument was re-designed with a more efficient magnetic pickup, located in the center of the body. This pickup is an interesting and unusual design, with four separate coils set inside a block of epoxy resin. This makes it fully humbucking with a nice dark and growly tone, very effective on a fretless instrument.

The bridge was also redesigned into a single integrated unit, which did not require the overlong strings of the original model. It remains fully adjustable for height and intonation, with an additional tension bar behind the saddles that can vary the string angle. The almost-solid body is carved from solid blocks of maple, which is another improvement from the multi-laminated bodies of the earlier models. The unique scroll-head neck is also maple, with a heavy ebony fingerboard. This is an extremely high quality, professional grade instrument in all aspects.

The AMUB-1 abounds with original and thoughtful design touches, from the carved-through f-holes that can be used as handles to the pull-for-off volume pot. This was the first fretless electric bass offered commercially but the production run was under two years and relatively few were made. The AMUB-1 which combines the fretless neck with the superior 1968 body and pickup design is perhaps the greatest of the Ampeg basses...it is certainly the most useful to serious players and remains absolutely distinctive in both look and sound 50+ years on.

This particular example was previously owned by Steely Dan's Walter Becker, a connoisseur of interesting instruments and sounds. Other high profile users in the '70s were The Band's Rick Danko (the AMUB is most associated with him) and Boz Burrell of Bad Company. The AMUB-1 is simply one of those sadly underappreciated classics, a far better instrument than its relative obscurity would suggest.

This imposing Ampeg is in all-original condition, showing some play wear but with no repairs or alterations. The body finish on these is notoriously fragile -- this one has numerous small chips, dings, and rubbed spots (some touched up neatly) but none of the wholesale flaking many have suffered. The back has some heavier belt buckle wear; the largest spot appears sanded out somewhat. Much of the finish has been worn and/or sanded off the back of the neck, giving it a superb feel similar to an old upright...and an old worn-in Fender neck!

The bass is original and complete except the tailpiece coverplate is missing; the knurled bolts that secured it are still intact. Playability is excellent and the sound is most unique, even among other fretless basses. We don't know what use Walter Becker may have made of this bass (he was primarily Steely Dan's bassist originally), but it was one of the jewels of his 4-string collection. The original case is included, which has some wear and a replaced handle and neckrest but is still fully functional. Excellent - Condition.
×