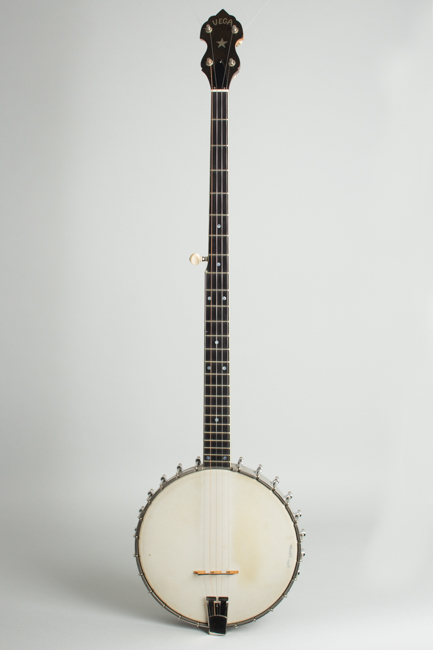 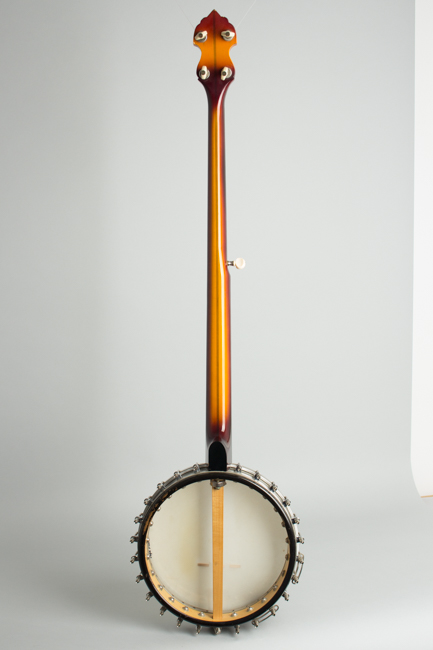 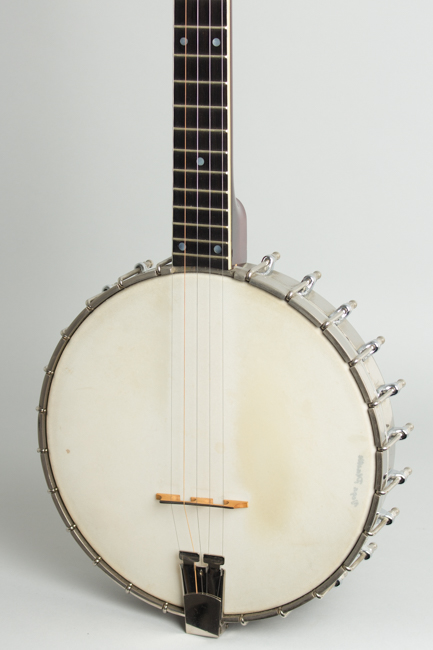 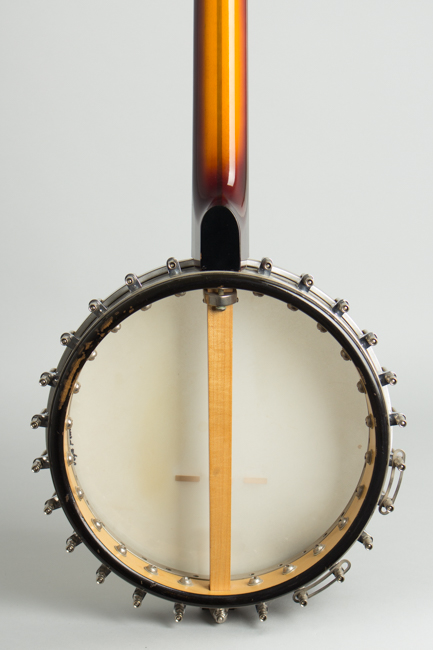 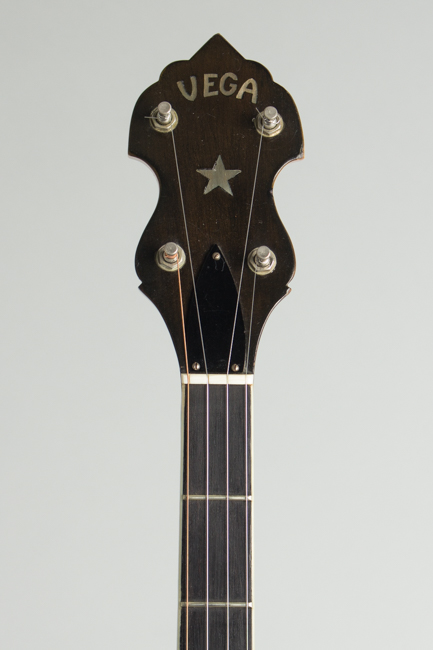 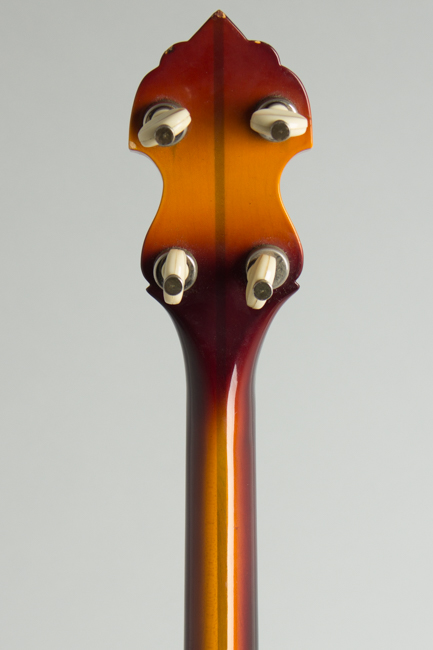 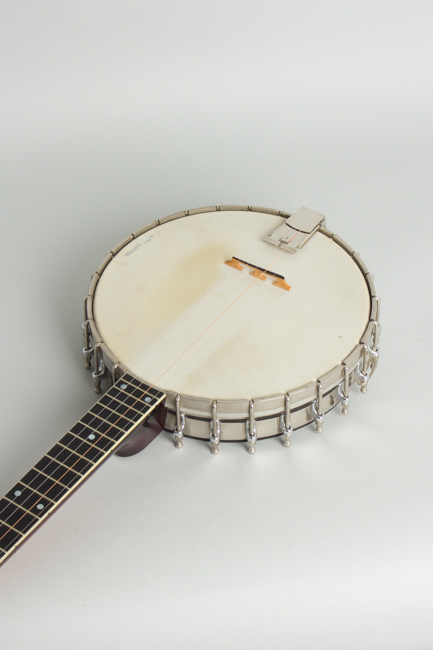 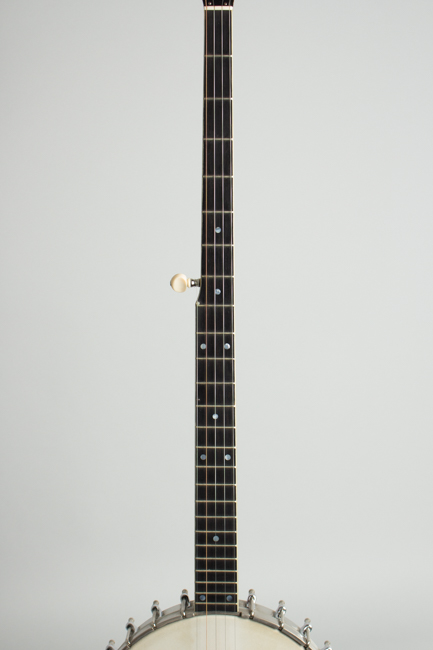 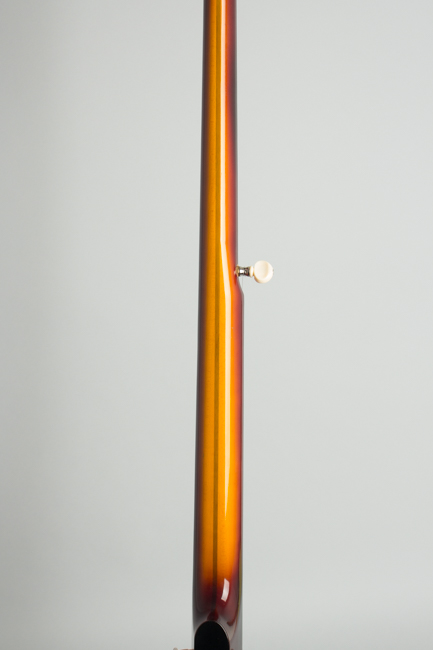 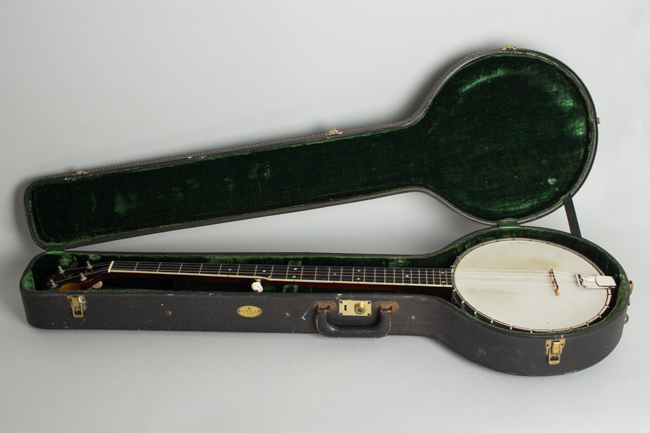 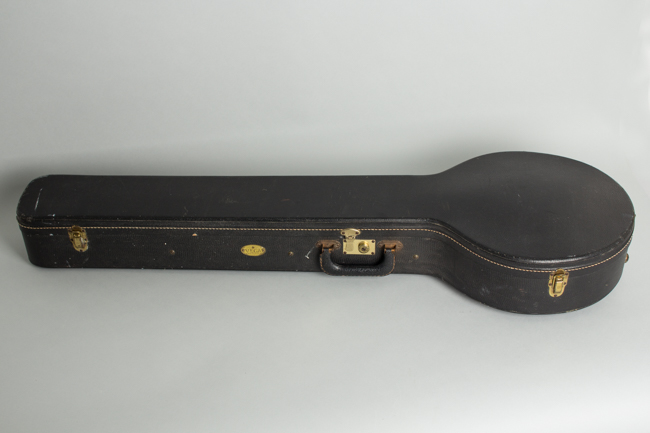 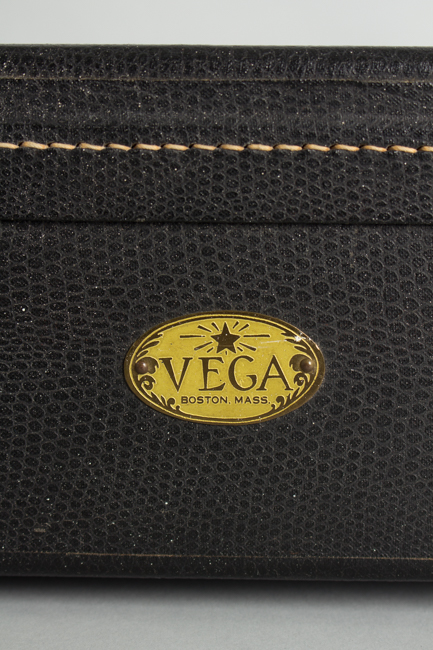 This is an early and very nice example of the classic Vega longneck "folk" banjo from the early 1960s, originally designed as a custom instrument for Pete Seeger then put into production late in 1958. This is the earlier original style model with a traditional wooden dowel stick, replaced with Gibson-like co-ordinator rods later which added quite a bit of weight to the rim.

The rim itself is the old Tu-Ba-Phone pattern, still with round holes instead of rectangular cut-outs found on later PS-5 and Vegavox models. The shoes are mounted through the rim from the inside (instead of just through the bracket band), but otherwise it is built to the same high standard as Vega's older prewar instruments with typically excellent workmanship. The neck is laminated maple, finished in sunburst with a dot-inlaid bound ebony fingerboard. The headstock face has a pearl inlaid Vega logo and star emblem, with geared Elton "pancake" tuners...these were later replaced with Grover Rotomatic guitar tuners with considerably less aesthetic appeal.

The original gold Vega hangtag is included, hand filled-in with the 1961 price ($295, plus $55 for the case) and a crossed-out mistake reversing digits on the serial number. Unfortunately the yellow label Vega with the Pete Seeger name is gone from the inside of the rim, although the spot where it sat still shows the glue markings. Fortunately the serial number remains also stamped on the dowel stick. The original Vega-branded green-lined case is still with the banjo in very nice shape.

These banjos were designed primarily to be tuned down to "E" using standard 5-string "G" tuning intervals. The development was the result of Pete Seeger's need for a banjo that could comfortably accommodate different vocal keys, especially the typical blues guitarist's penchant for playing in E! He also sometimes used it in a low Bb version of "C" tuning. Most players kept a capo handy to easily switch to G or other keys...the position dots are actually designed to be in the familiar layout when the banjo is capo'd in the 3rd fret "G" position, and look odd when it is not.

This style banjo was an essential piece of equipment for late 1950s and early '60s folk groups, starting with the Kingston Trio. This actual Seeger signature model longneck was very sought after at the time and considered rather expensive; they are actually rather rare today. Vega offered a less expensive version without the Tu-Ba-Phone tone ring and other makers soon copied the instrument, but the genuine Seeger model -- especially this early version -- remains the finest and most desired of all these long necks. While not often seen today, this is an interesting and versatile instrument just waiting for revival!

This banjo remains in excellent original condition with some light wear. There are a few small dings on the edges of the headstock and the heel, but really the neck finish appears very little used. The only really notable finish wear is to a few spots where the lacquer is worn down to the wood on the bottom edge of the rim. The yellow Vega label looks to have fallen off long ago, but the glue spot where it was is still plainly visible.

The plating on the rim and hooks is relatively clean as well, with some clouding on the rim surfaces but no major corrosion or loss. The head is the original Vega-branded plastic (which was a very recent development at the time) and is in good playing condition with some wear on the top surface. The bridge is a period (possible original) maple piece with an ebony cap sloped down on the treble side.

The hardware is original and complete except the armrest is missing (the mounting brackets remain) and 5th string peg is the correct style but newer. The four original Elton "pancake" tuners on the headstock have small knurled adjustors in place of the usual tension screws, which is actually pretty handy. There are suitable screws stored in the case, if preferred. The banjo plays excellent with a big ringing sound, just as it did in 1961. The original Vega-branded case has some external wear but is nicely preserved as well. This is one of those instruments that just does not turn up much anymore, and we are always glad to find a nice one! Excellent Condition.
×