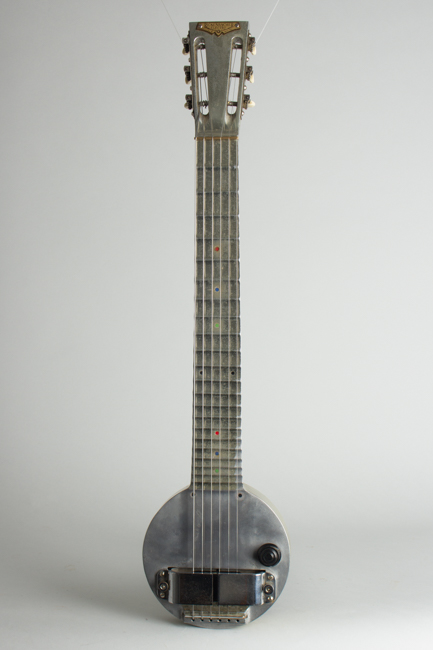 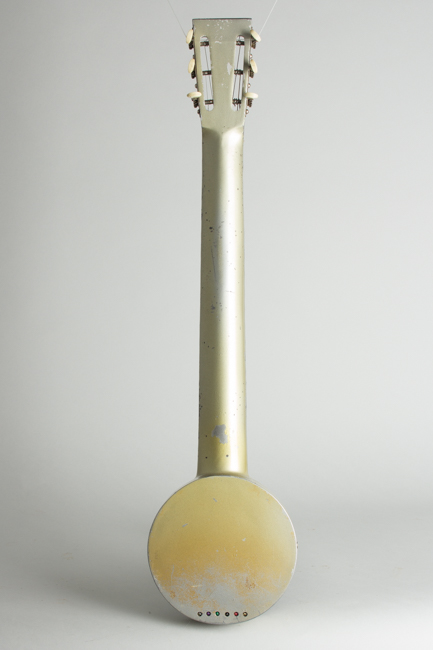 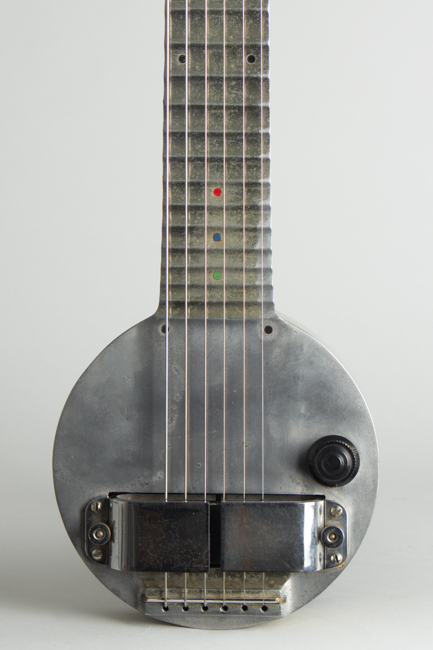 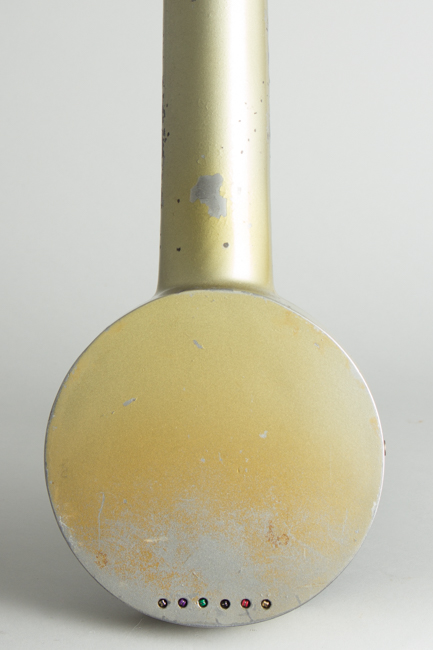 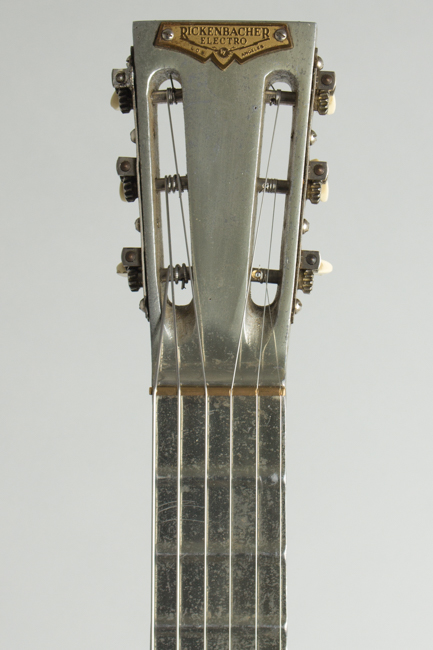 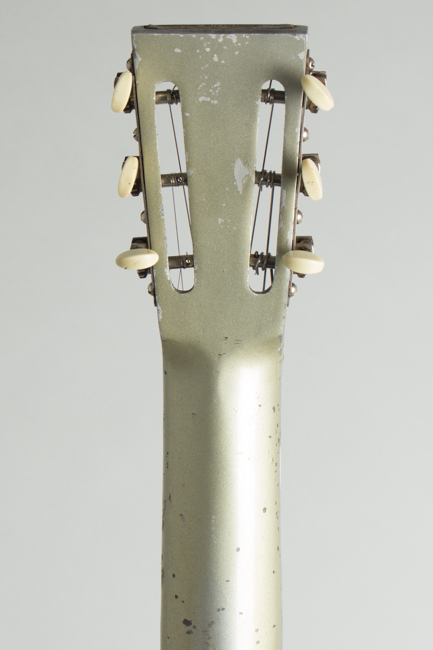 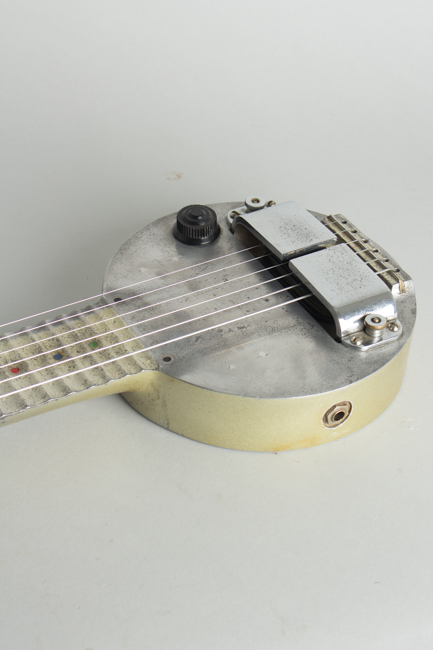 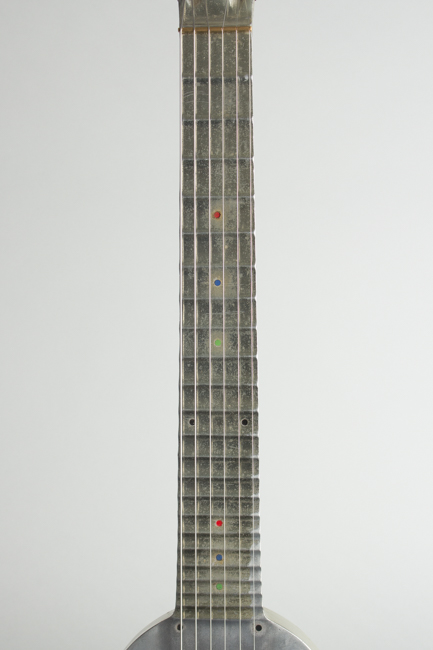 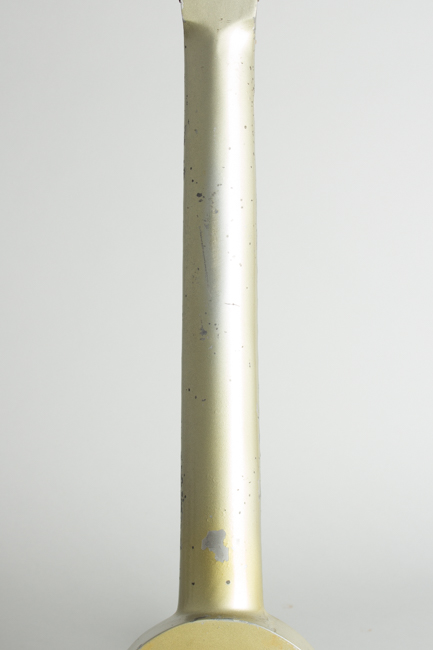 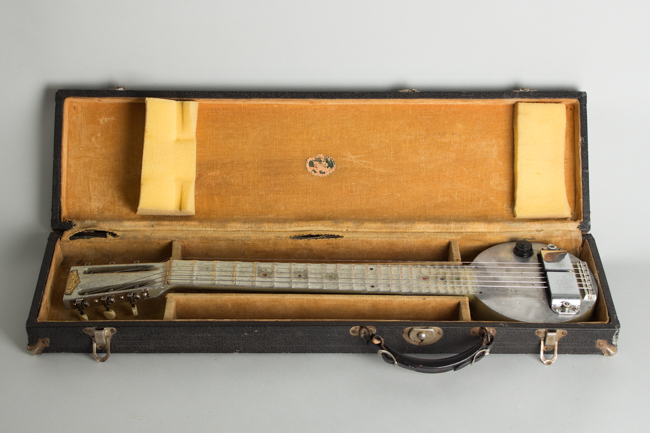 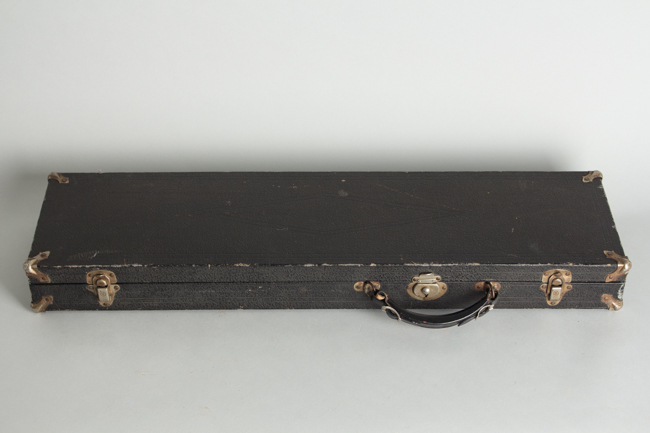 The Rickenbacher A-22 Electro Hawaiian Guitar, nicknamed the "Frying Pan", is simply one of the most historically important 20th century guitars extant. This is the first commercially successful electrified string instrument as well as the first solid body guitar. This instrument was the initial carrier of the celebrated pre-war 1 1/2 inch horseshoe magnet pickup, the first electro-magnetic instrument pickup to be perfected and still one of the greatest-sounding units ever.

While the very first few Electros have no onboard controls, this example has a single volume pot with a Bakelite knob seen from 1933-5. The fingerboard is integral with the neck and has raised ridges for frets and green, red, blue and black inlayed dot markers. The entire instrument is fabricated in one piece of cast aluminum with the strings thru body, with separate chromed metal nut and saddle.

The slotted headstock has 1920's style quality open gear strip tuners with grained ivoroid buttons, as seen on many period Martin and Gibson guitars. A gold metal name plate mounted there reads "Richenbacher Electro, Los Angeles" with "RE" between mirrored lightning bolts. The serial number is A25 making this one of the first "Frying Pans" built after the 1935 introduction of the Bakelite Model B. Although the A-22 was marketed and usually used as a Hawaiian guitar, the neck is round and with a different set-up this instrument could also have been played Spanish style - something designer George Beauchamp alludes to in the patent application.

This example has some wear and restoration but is perfectly playable, and still sounds fantastic. Apart from its historical importance the guitar itself is a very fine musical instrument and remains one of the best-sounding steels ever produced. The introduction of this instrument created the market for the electric guitar, as this is the first successful use of an electro-magnetic pickup for a stringed instrument set the pattern form all that have come since.

This rare Rickenbacker steel shows a decent amount of wear overall and some restoration, but remains a fine playing and sounding example of this historically important and sought-after lap steel. The original pickup is restored by Tom Brantley, one of the very finest dedicated vintage pickup technicians and a true expert in the field. The original coil has been rewound to the proper period spec. by him; the original magnets and internal wiring is intact; the sound is still sublime. The Bakelite volume knob remains original or at least period.

The finish on these very early Rickenbackers is inconsistent and often proved fairly fragile in use. This one has numerous chips, scrapes, dents and dings to the original silver/gold wash enamel on the back of the body and neck. Most of the face, fingerboard and headstock are down to bare aluminum with areas darkened and well rubbed from contact with the players hands. The front of the instrument has a number of places spots where moisture has worn into and through the metal; this is actually beautiful in a reliced "Decasia" sort of way but of course is not quite as it looked when new.

There are four small patched screw holes in the top of the body, possibly from some sort of handrest once fitted there. These have been neatly closed up but the resulting spots are still visible on close inspection. This is fairly inconspicuous. The polished brass nut is recent, a correct stylistic reproduction of the original but not chrome plated like that was. The chromed metal bridge saddle remains original.

The pickup magnets have some corrosion and scratching to the plating on the top, as do the mounting flanges. The flat-plate tuners are original and still work well. Everything on this A-22 works as intended and this is a wonderful player's example of this sublime instrument. Despite scars from a long life this still represents a true holy grail for steel guitar players and electric instrument collectors worldwide. At least according to legend many of these were melted down in the 1940's to reclaim valuable aluminum for the war production market! This one includes a relatively well preserved original rectangular hard case, a substantial rarity in itself. Very Good + Condition.
×