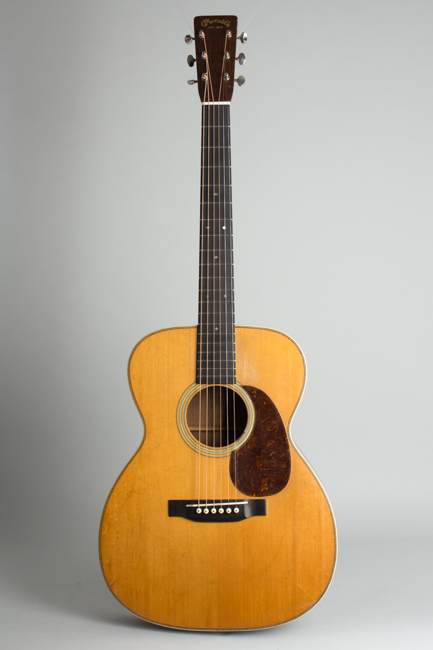 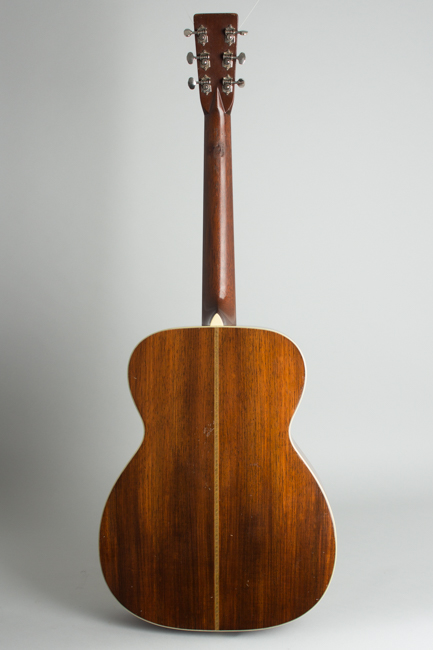 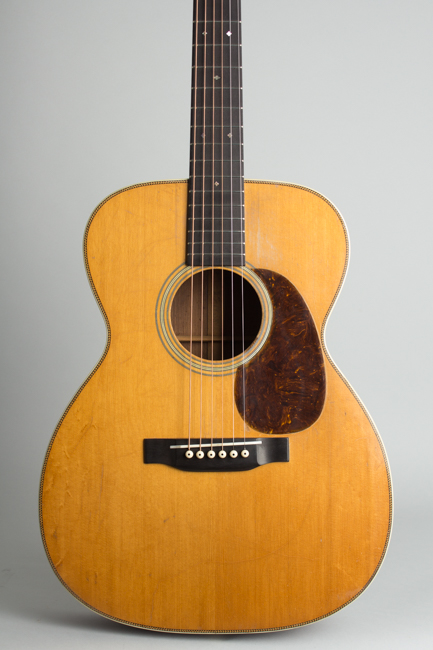 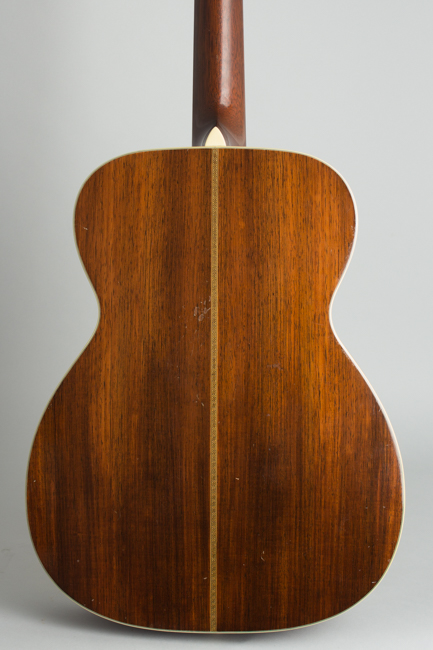 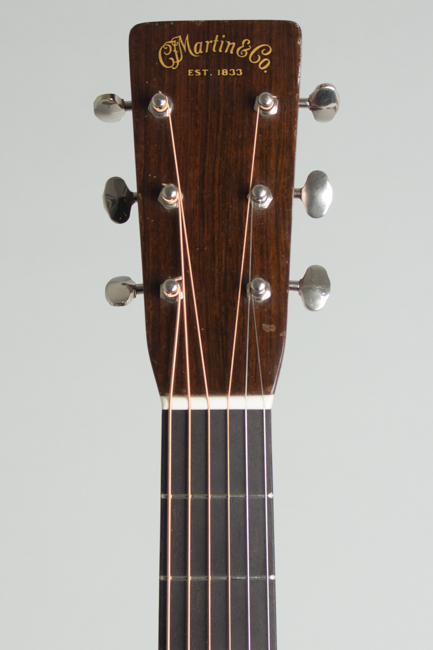 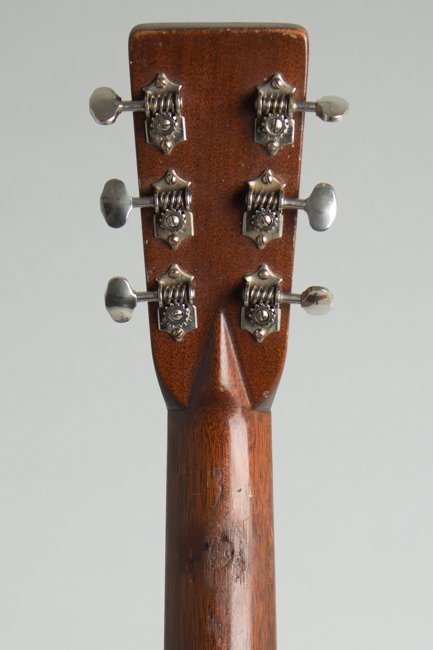 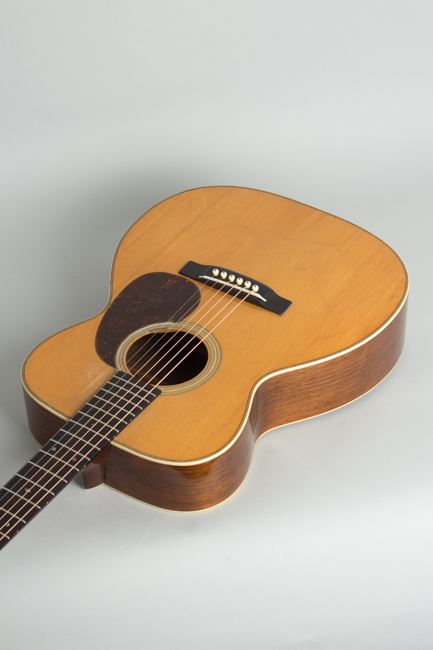 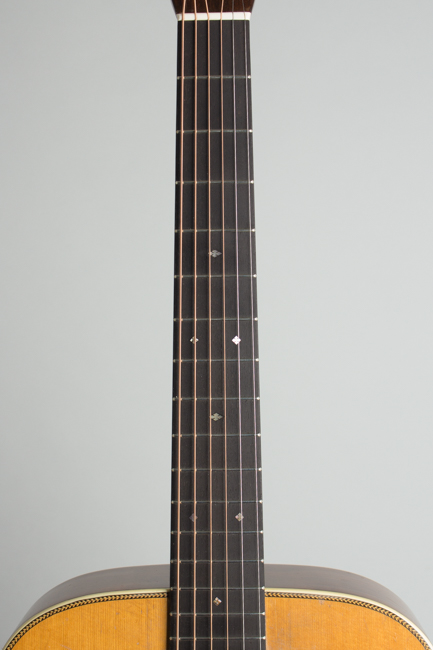 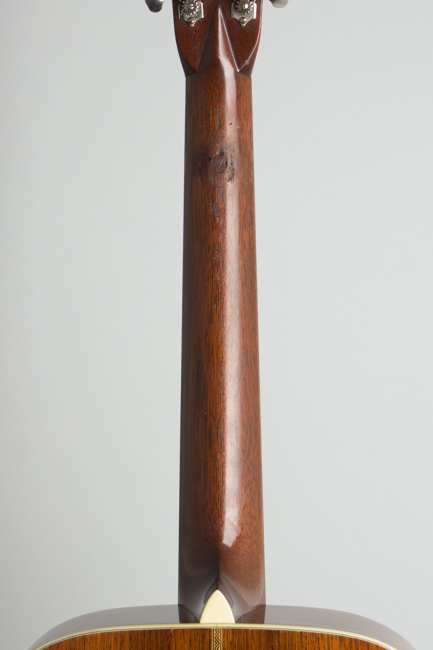 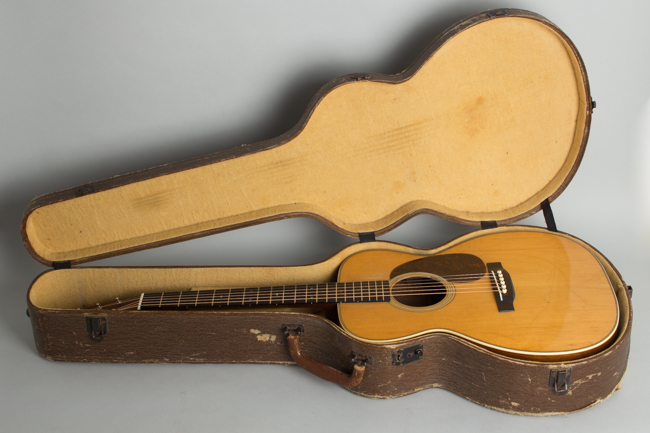 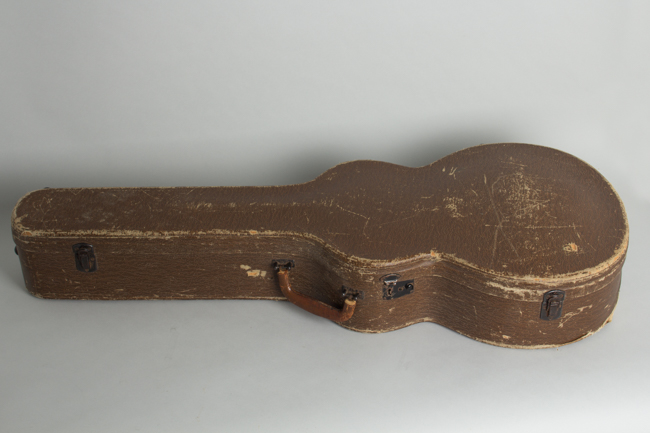 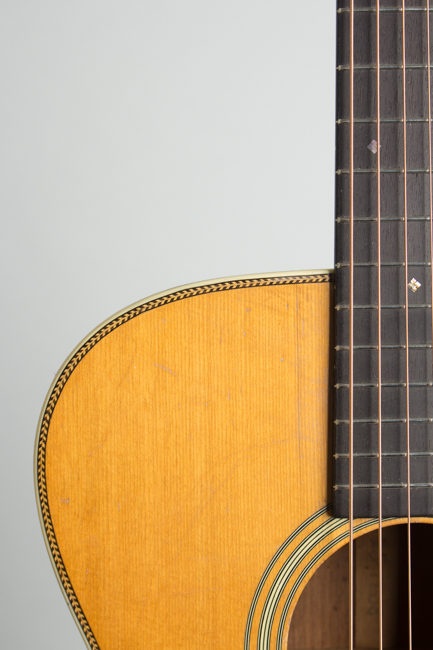 This is a truly superb original pre-war Martin 000-28 from 1937 with the earlier "forward shifted" X Bracing and wider nut that have become the connoisseur's choice features. There are certain guitars that are simply the standard by which others are judged and the 14 fret 000-28 "herringbone" is certainly one of them. The best Martins of this pre-1939 period are to many players still unmatched for sound quality, even 80+ years along.

The 1937 000-28 is to some players about the perfect flat-top guitar. The 15" wide narrow waisted body is just over 1/2" smaller than the Dreadnought but yields a generally more focused midrange sound. The lightly scallop-braced top helps make the instrument extremely responsive, offering considerable power and depth combined with sweetness, sparkle, and a singing character. The scale is slightly shorter than the earlier 1930s OM model which makes the action a bit more supple.

This 000 shows all the classic pre-war appointments, which have been widely imitated ever since. The back and sides are Brazilian rosewood with the lovely even straight-grain figure Martin prized. The top is very tight-grained Appalachian red spruce, bordered with the famous "herringbone" wood trim that has come to define the "28" models and bound on the outside with ivory celluloid. The back is triple-bound in celluloid with a chain pattern backstrip. Other features include the 1930s-style long-saddle ebony bridge, multiple celluloid sound hole rings, and a dark brown tortoise celluloid pickguard.

The neck is mahogany with an unbound ebony fingerboard decorated with discreet slotted diamond pearl inlay. The peghead is faced in straight grained Brazilian rosewood with the gold "C.F. Martin & Co." decal at the top. The neck profile is round backed but with the slightest hint of a "V" profile in the way the sides bear away from the center as it moves towards the nut, which is the wider 1 3/4" size of the mid-'30s. The tuners are early Grover G-98 Sta-Tites with "butterbean" buttons, still intact and quite functional even after many decades of use.

While always a popular and well-respected instrument, rosewood 000s from this period are far from common guitars. Only 113 000-28s were produced in 1937; this example would have shipped out around the end of the year. Compared to modern production that is a paltry number, but Depression economics made this $90 guitar (without case) unobtainable to many. This price was only $10 less than the D-28 Dreadnought that was fast becoming Martin's standard model, and $10 more than Gibson's competing Advanced Jumbo.

Many of these guitars were working instruments for professionals, played into the open mikes of radio studios and barn dance stages. In this environment a guitar had to have the maximum of both depth and projection, and many Cowboy and Country and Western performers of the period (accent on the "Western") found the Martin 000-28 was one of the best instruments available for this highly competitive musical environment. This was a rough-and-tumble world and quite a few guitars were literally "played into the ground" over the course of a career.

Although this musical context is mostly just a memory in the 21st century, this original 000-28 still plays effortlessly with the smooth and powerful sound typical of original "Golden Age" Martin guitars, perfect for a wide range of styles vintage or contemporary. This is a fantastic recording guitar, with the mellow depth of a rosewood body mixed with the instant ring of the lightly scallop-braced top. It has been expertly maintained and is ready for many more decades of use. A beautiful guitar to behold and to hold, this 000-28 a true joy to play and a significant piece of flat-top history.

Overall this is a lovely example, showing some wear and tear but considerably more original and better preserved than many of these often hard-worked pre-war guitars. The finish shows a collection of dings, dents and scrapes overall, but the only large areas of loss are to the lower sound hole rim and the back of the neck. There is no apparent overspray or added finish to the thin original lacquer and the guitar blacklights very cleanly. There are some rather random scratches to the top, mostly into but not through the lacquer, but less pick wear than is often encountered on Martins of this vintage.

The neck has been very cleanly reset and the fingerboard trued and perfectly refretted with period correct wire. The bridge has been replaced with an excellent replica; the original, which was sanded down a bit, is still in the case pocket. There are a few small pulls and marks around the bridge from where it was removed long ago. Internally, this guitar is very clean, including all the bracing remaining original and undisturbed and the original small maple bridge plate intact. There is one small cleat on a tightly sealed crack off the top edge of the pickguard. The top shows a set of pressure marks along the grain on either side of the fingerboard, probably residue of an older neckset. These are not cracks into the wood, and there is no evidence of movement underneath.

There is some noticeable wear to the back of the neck including a significant dented area behind the 2nd fret where it looks like a pretty intrusive capo was used. There are some much smaller, shallower marks from this same cause at several other fret positions. The neck still feels great, with the caveat that the denting in the 2nd fret area is definitely noticeable. The heel cap appears to have been replaced. There is no notable wear to the fingerboard.

While not a perfect example, this rosewood 000 is in far more original condition than many of this period, and is a perfect player with the fantastic sound one would expect. The guitars from this prime period are quite hard to find in anything like original condition. This beautiful survivor is full of great songs and stories it could tell, just waiting to be coaxed out. It is housed in a perfectly fitted HSC that appears to be from a bit later than the guitar, possibly the early 1940s, although most would call it original. Overall Excellent - Condition.
×