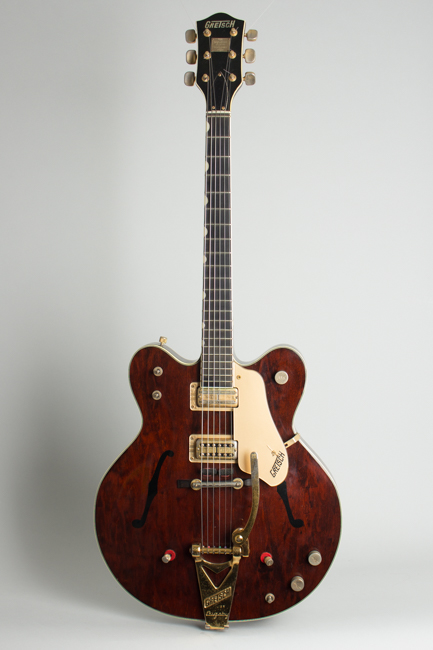 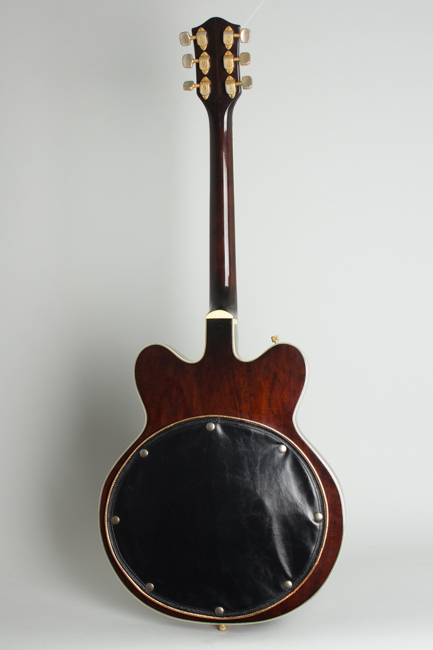 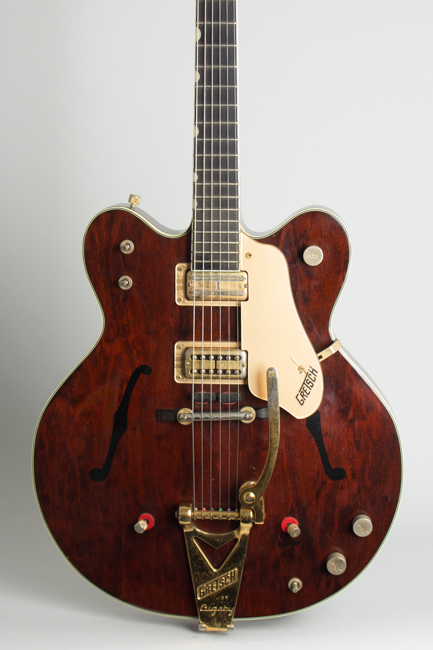 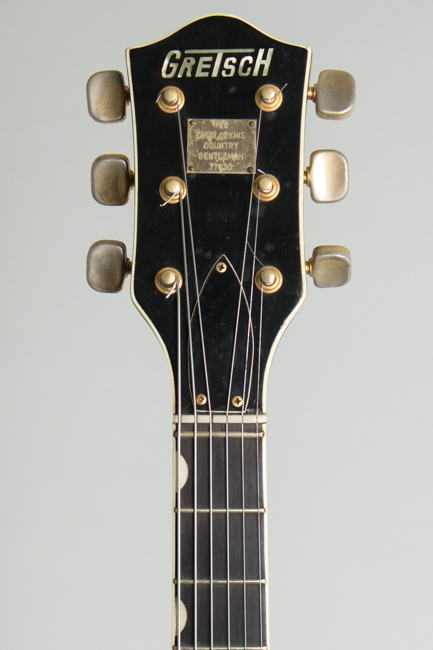 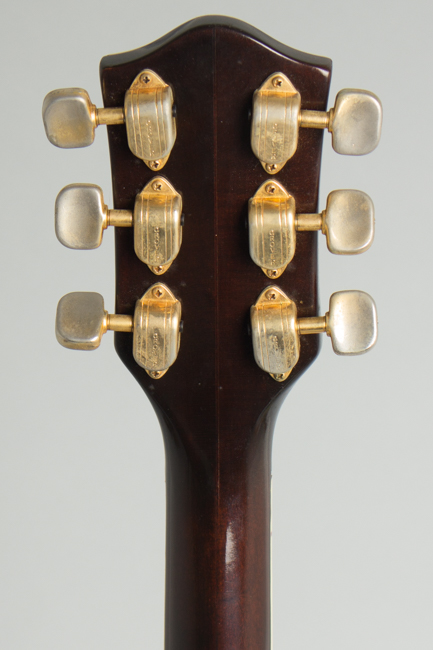 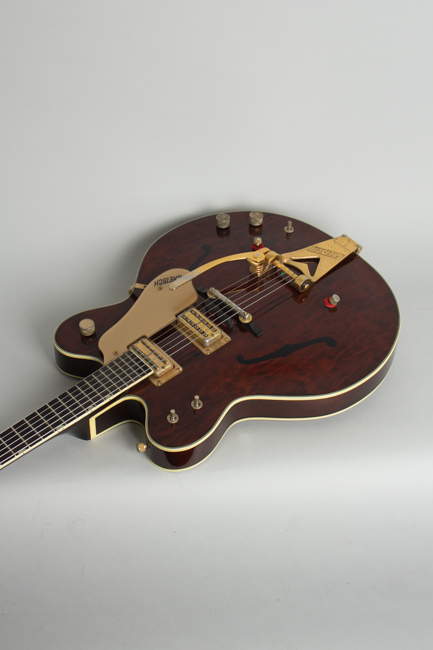 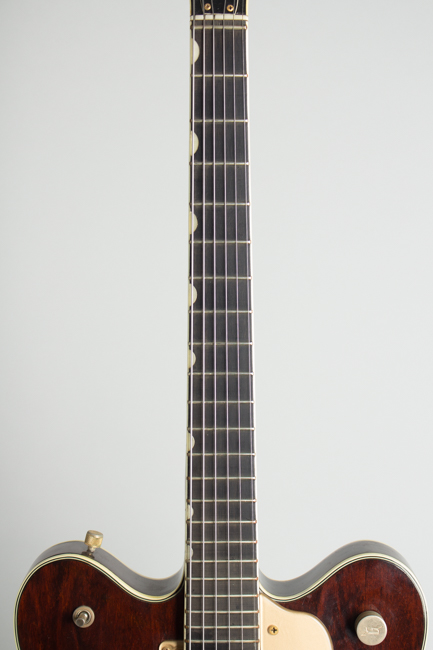 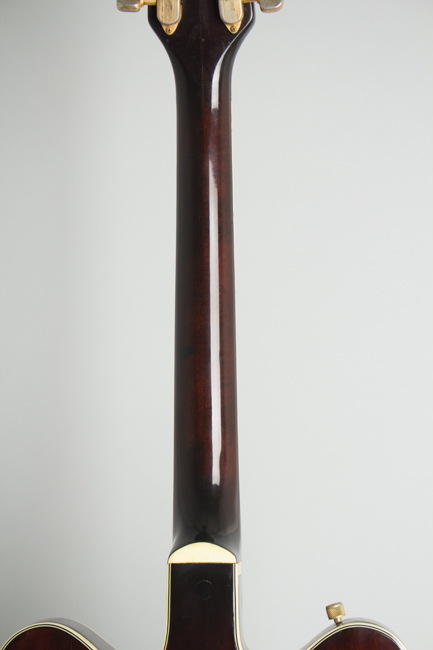 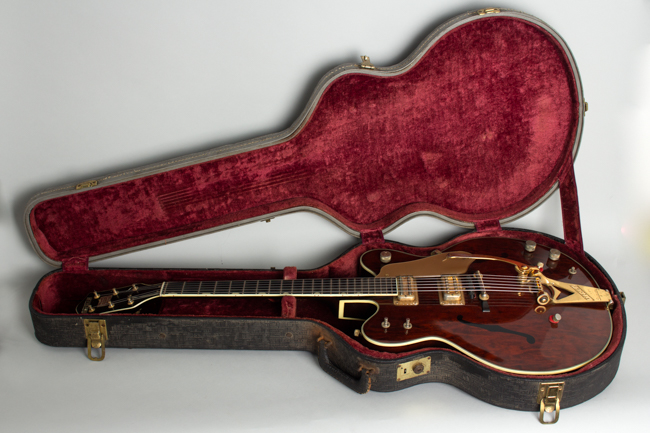 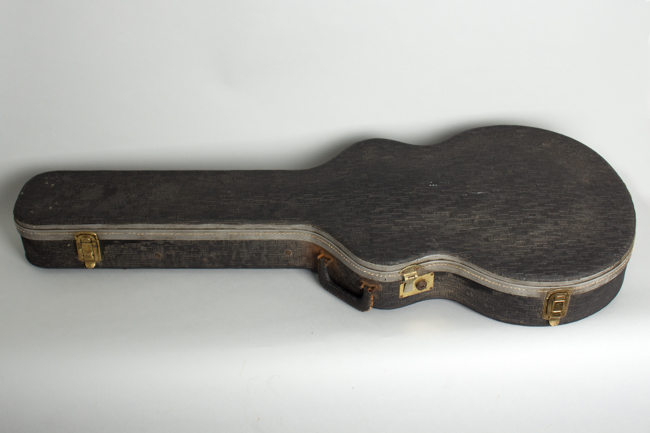 The mid-'60s Country Gentleman is one of Gretsch's classic designs, beloved by George Harrison and a host of other players since. It features the thin double-cutaway closed "Electrotone" body with simulated f-holes on the top and a padded back. This version of the model was introduced in 1962 and was built for the rest of the decade, one of Gretsch's most consistently successful models. After the Beatles' February 1964 Ed Sullivan show appearance, the Country Gentleman was immediately enshrined as an absolute classic 1960s guitar, subsequently used by countless English and American groups.

This particular guitar from is from late 1964 and remains relatively close to the iconic "Harrison spec." model. It retains the double mute system with red felt pads under the switches and the pickguard marked simply "Gretsch" but has more oval "kidney shaped" buttons on the Grover Imperial tuners and a Super'Tron pickup (with solid bars instead of individual polepiece screws) in the neck position. This pickup variation gives the guitar a different look and perhaps subtly different sound than Harrison's iconic 1963 model which featured two Filter'Tron pickups. The pickup change was apparently Atkin's personal choice but arriving in early 1964 was ill-timed for Beatle fans and collectors; this has made it much harder to find the exact "Harrison" model which was only produced in 1962 and '63.

This Country Gentleman also has the darker body finish typical of earlier models...in many pictures Harrison's guitar looks almost black. This contrasts nicely with the all-gold hardware, including the "Gretsch by Bigsby" tailpiece. The Country Gentleman was the top of the Chet Atkins signature models, close to the top of the entire Gretsch line and always a deluxe and very expensive guitar -- in 1964 the price was $595, not including the case. Many young fans must have sweated away the summer of '64 trying to work up the money to afford one! Because of this Beatle boost quite a few Gents were sold in the mid-'60s despite the high price tag, but many have not survived this well.

This Country Gentleman is all original, unaltered, and in very clean condition. The finish does not show much wear at all, it retains the original glossy patina with just some minor dings and scuffs. The gold plated hardware shows some loss, as is typical, especially the pickup covers and bridge. Unlike the great bulk of older Gretsch guitars today, the often problematic celluloid binding is in VERY good shape with just a couple of small areas of disturbance. The body binding along all edges shows no shrinking or deterioration at all. There is some very slight shrinkage along the fingerboard on the treble side near the nut, otherwise the neck binding is also completely solid. The heel cap and the rectangular celluloid block on the treble side of the heel shows minor deterioration (actually just some light checks); these pieces can be replaced if desired without disturbing the rest of the instrument.

This guitar has never had the neck reset, and the action is low and easy to play with room on the bridge to go lower if desired. There is some light checking to the headstock veneer. The original pickguard has one small crack around the bracket screw, another common if inconsequential Gretsch malady. There is another small crack at the upper rear mounting screw hole of the bass pickup mounting ring, also very common with these hard plastic parts. The dual flip-up "muffler" mechanism is fully functional but the original pads are now the approximate consistency of 55-year-old chewing gum, so they would need to be replaced for it to do its job.

The original frets show hardly any wear and the guitar plays just as it should, currently set up 1964 style with flatwound strings. This Gent is far better preserved than most of this period, a really nice instrument that still exudes class. This is absolutely one of the nicer "Beatle Era" if not exact "Harrison spec." Country Gentlemen we have had! It is complete in the original deluxe grained Tolex blue-grey two tone hard case. Excellent Condition.
×