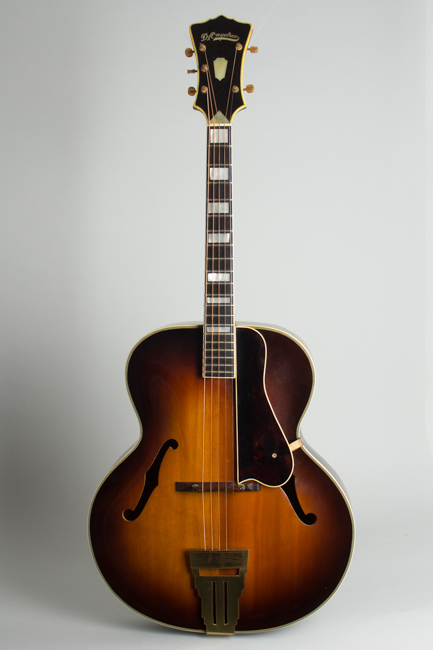 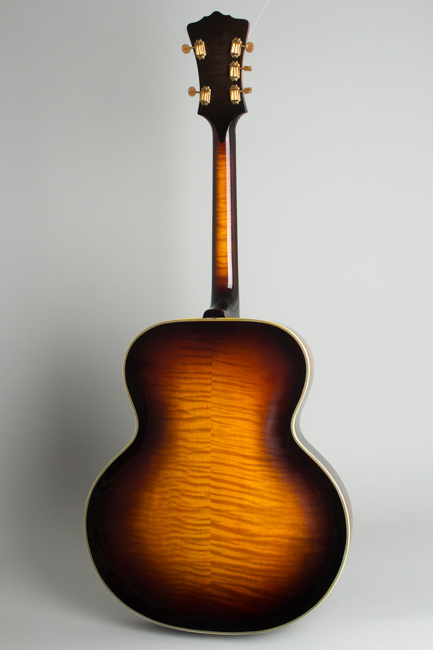 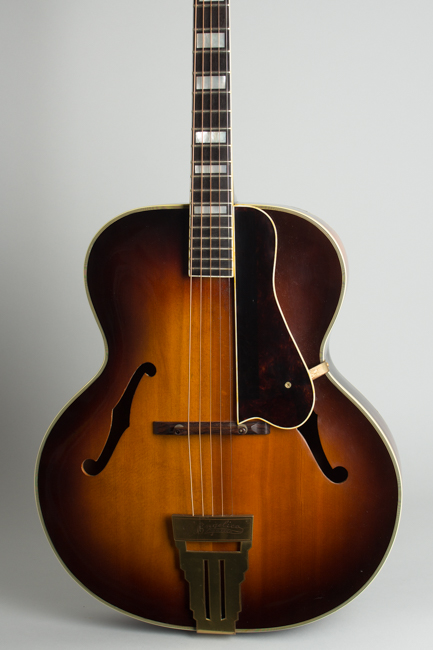 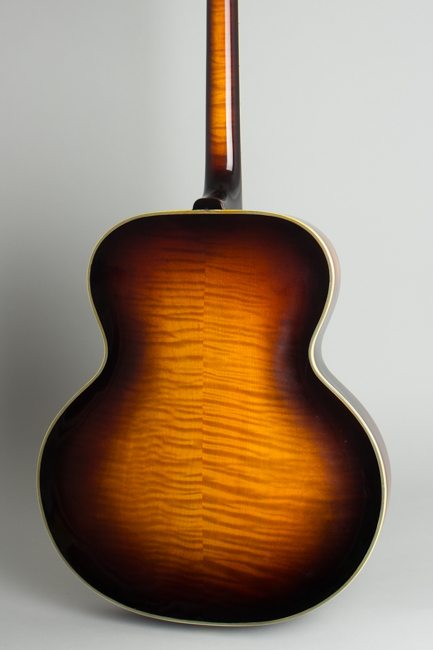 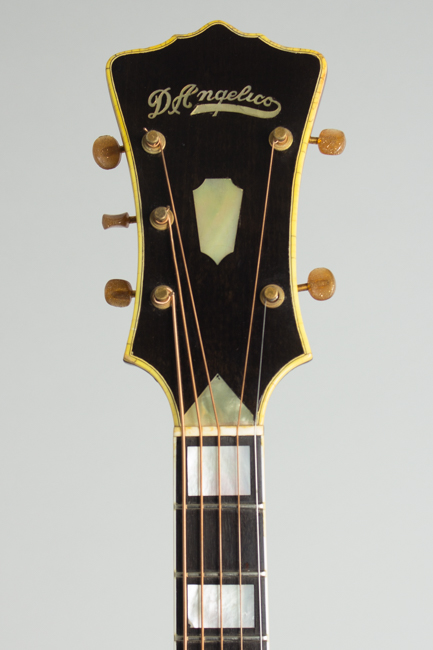 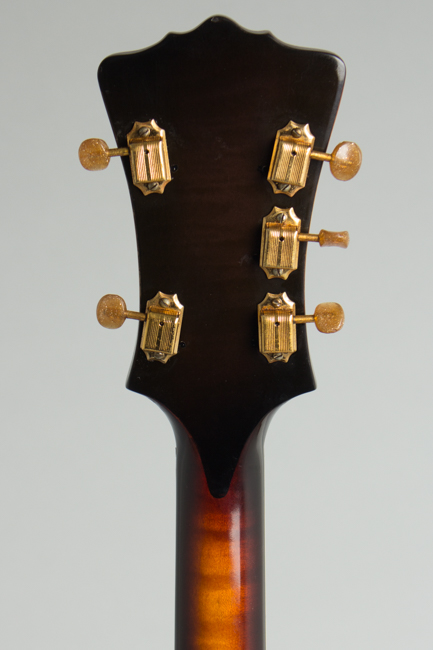 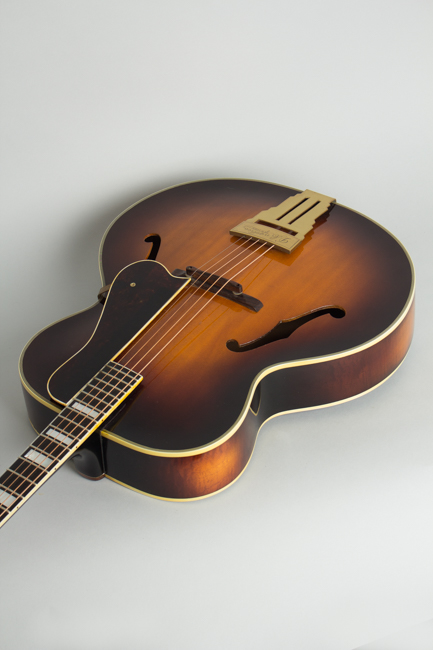 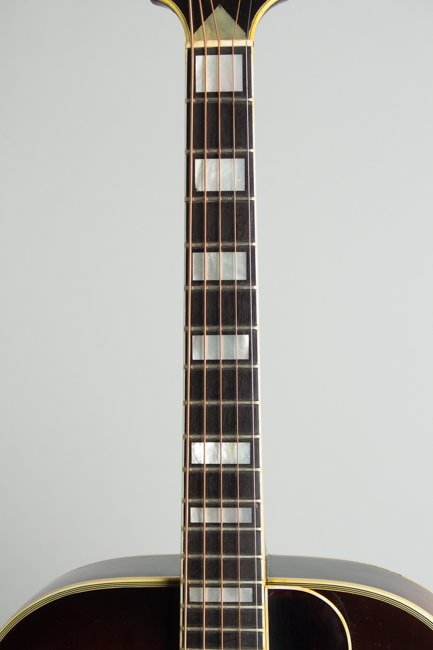 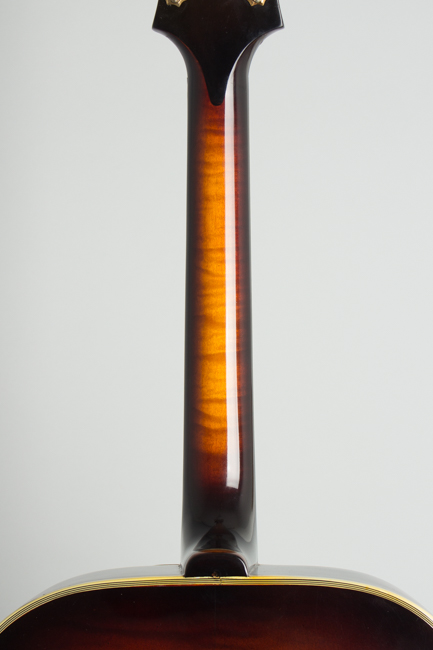 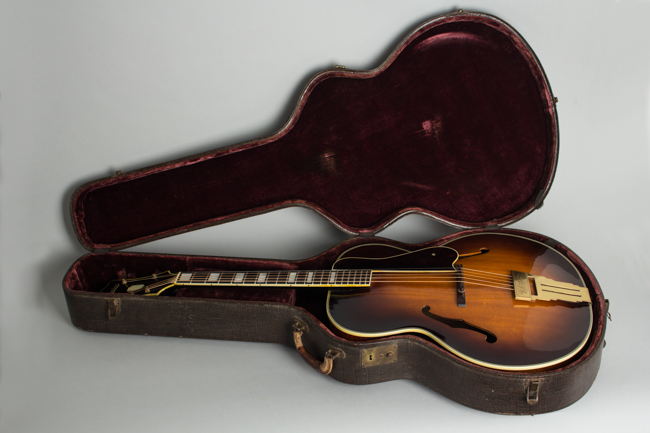 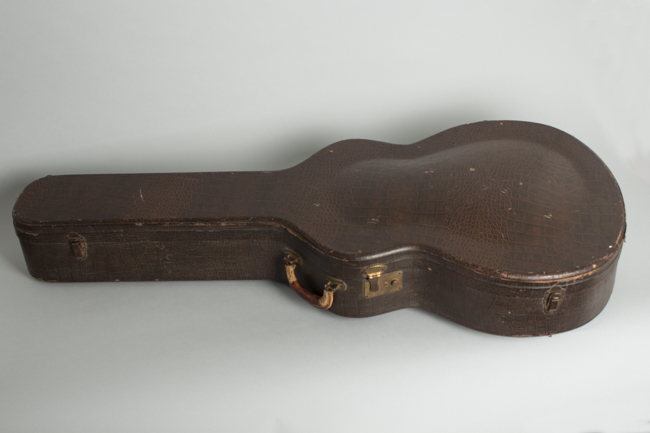 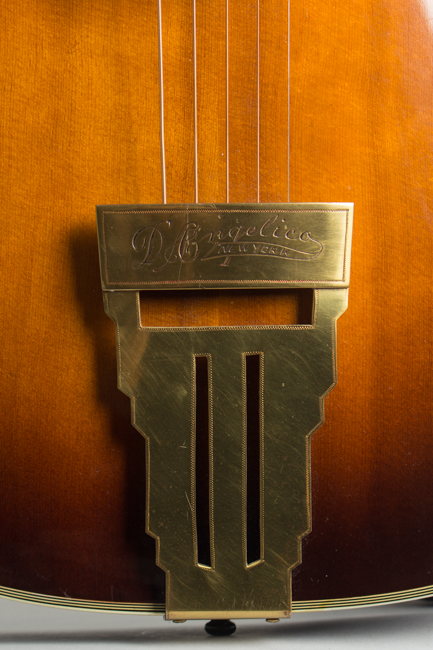 This is one of the more unusual and inexplicable instruments we have encountered, although at first glance it seems fairly conventional. When one looks more closely, however, it becomes evident there is one glaring anomaly...there are only 5 strings on the instrument, and it was designed that way!

This is a custom-made 5-string D'Angelico guitar, obviously ordered by someone with a non-standard tuning and playing style. John D'Angelico's career as a luthier spanned decades, and he was asked to make a number of off-the-beaten-path instruments including a miniature arch-top ukulele, a guitar with a giant tailfin, and a mandolin in the shape of a machine gun. Although he built a number of 4-string instruments, this is the only 5-string we are aware of.

The great mystery of this instrument -- beyond who ordered it originally -- is how it was meant to be tuned. When it came in it was strung as a standard guitar, but without the low E string. This is generally known as "Keith Richards' stringing" as it is how the Rolling Stones guitarist performs many of their classic numbers, using a banjo-like open G tuning. That tuning works better in a standard scale, however, and the 22 1/2" scale on this instrument is shorter than most guitars, but similar to a typical tenor banjo. The player of this instrument most likely was originally a banjoist, and with that in mind, we have tuned this instrument to the hybrid 5ths low mandola/mandocello intervals that seem to lay out best on the neck...from a low C to a high E. Of course there are many other possibilities, and we would be happy to custom string/tune this one in anything practical!

This guitar is difficult to date exactly, as there is no serial number. Based on the visible clues, it was probably constructed in the early-mid 1940s. The body appears to have been made not by John himself, but by his sometime suppliers the United Guitar Co. in New Jersey who were incorporated in 1939. While these are mostly seen on dedicated electrics from the 1950s, there are examples like this dating back into the 1940s used on guitars John sometimes built for other accounts. A couple are known branded "Orpheum".

The body does feature a solid carved spruce top, which is worked fairly heavy in the D'Angelico pattern. It was probably actually carved by John's former associate Frank Forcillo who ran the United shop. The neck is a D'Angelico creation, as is the hardware. The tailpiece is typical of the early self-branded D'Angelico pieces, and is custom-drilled for only 5 strings. The top and back are 7-ply bound; the f-holes are unbound. The bridge is an older piece not in John's typical style, while the pickguard is either original or a very old accurate reproduction.

The one-piece flame maple neck is slim but not unusually thin, very comfortably shaped in typical guitar (not banjo) style with a 1 5/8" nut width. The ebony fingerboard is single-bound with pearl block inlay. The headstock is similar to the period Style A and B models, shaped with a center peak, triple-bound front edge, inlaid pearl D'Angelico logo, and two unengraved pearl ornaments. The tuners are 1950s gold Kluson Deluxes with sparkle plastic buttons; very attractive, but not original to the guitar.

It's impossible to know now who, how, or why this guitar exists...unless someone out there has a picture of it in use. It comes with a story about a pair of cruise ship entertainers of possible Polynesian extraction, but that still does not explain the 5-string layout. If you've always wanted a fine carved top tenor, mandola, and/or mandocello hybrid, here it is. If you have been looking for a D'Angelico set up to play "Brown Sugar" or "Start Me Up" (how 'bout it, Keef?) you can do no better. If you want bragging rights of having one of the world's rarest guitars, that's included.

Whatever its story, this is also a wonderful-sounding and playing instrument, like nearly all of John's creations. Whatever the reason for its existence, this is a fabulous piece of New York's guitar legacy and a truly unique piece of fretted history.

Like many custom and unusual instruments we have encountered, this guitar does not seem to have been played that much since being built. It does appear to have had some fairly extensive work done over the years, including a refret and some finish work. The sunburst lacquer finish is very clean overall with only light wear. It appears to have been over sprayed and/or polished out some time ago; the patina is almost perfectly smooth with no checking. The body binding shows no shrinkage or deterioration at all. There is one small crack repair on the upper back waist. The heel cap has been replaced, with a patched strap button hole on the base.

The headstock has been fitted with several different sets of tuners over the years, so there is some light touch up evident on the back covering the old mounting holes, and a clear overspray. The binding on the headstock face has a number of small splits along the edges but is not cracking or crumbling.

The guitar has been very professionally refretted and the neck rebound, in a style more typical of Gibson than D'Angelico. The bridge also is not in the D'Angelico style but is old and possibly a Forcillo-made piece. We'd love to know the full story here, but as it stands this is a lovely and unique hybrid instrument with its own sound and character. It still rests in its original 1940s New York-made case, ready to go forth into the world again. Excellent - Condition.
×