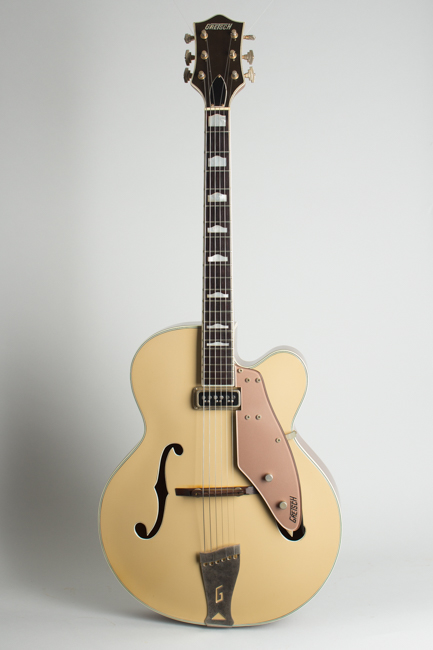 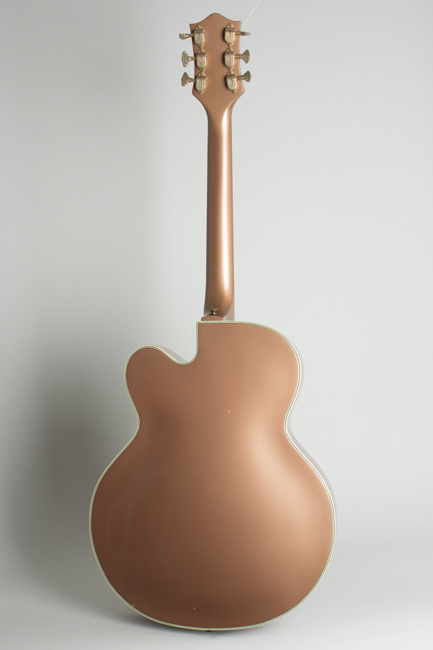 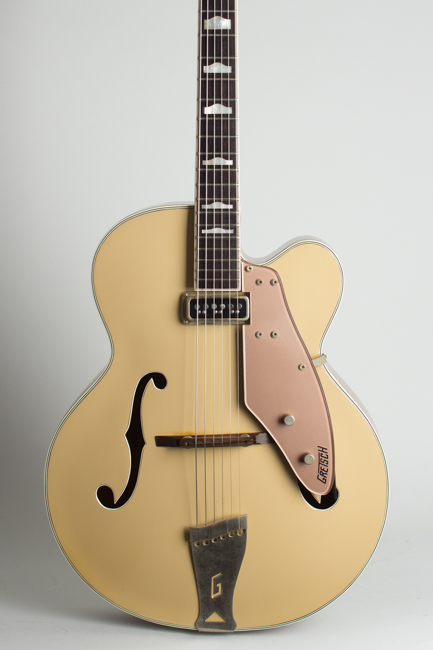 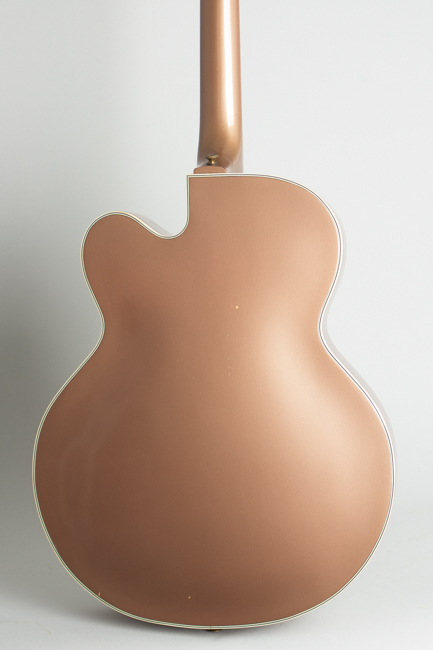 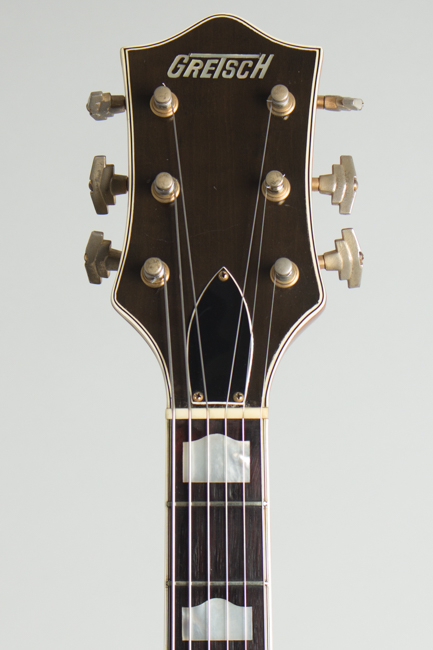 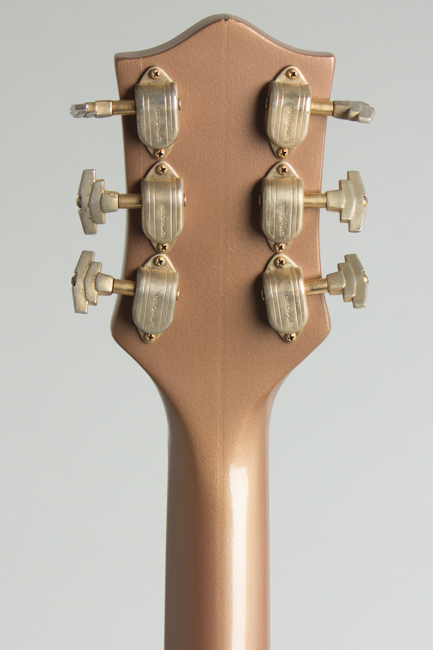 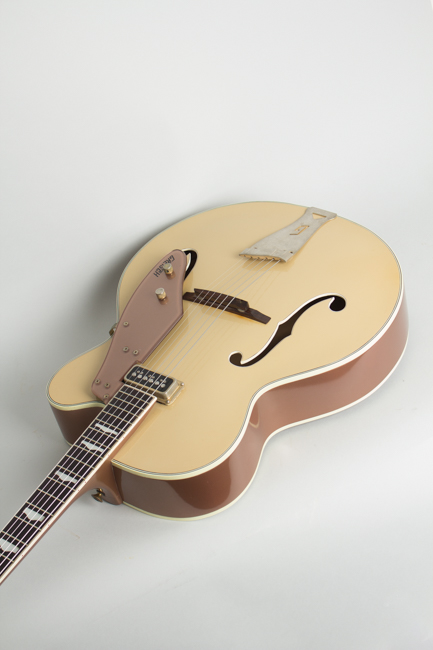 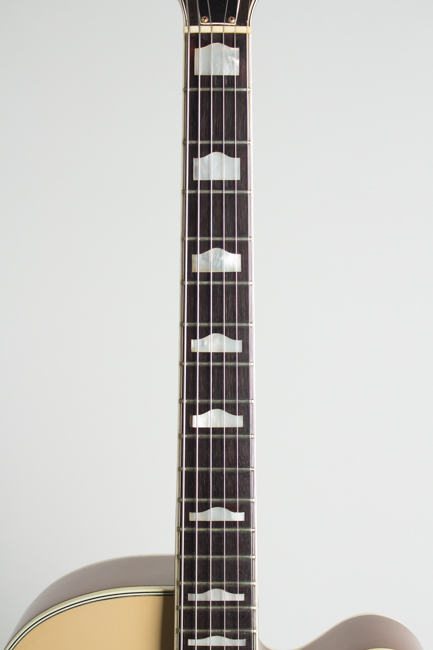 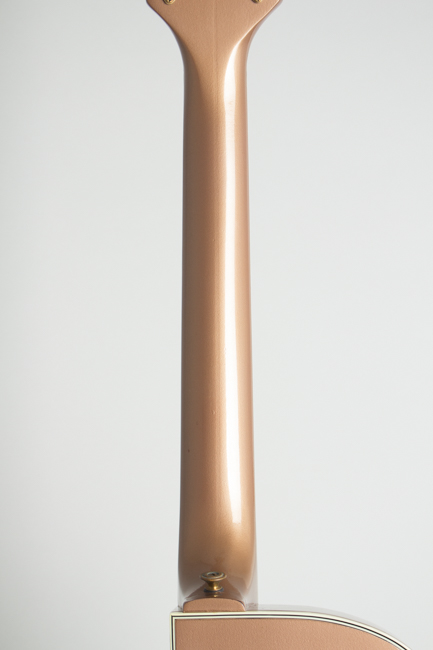 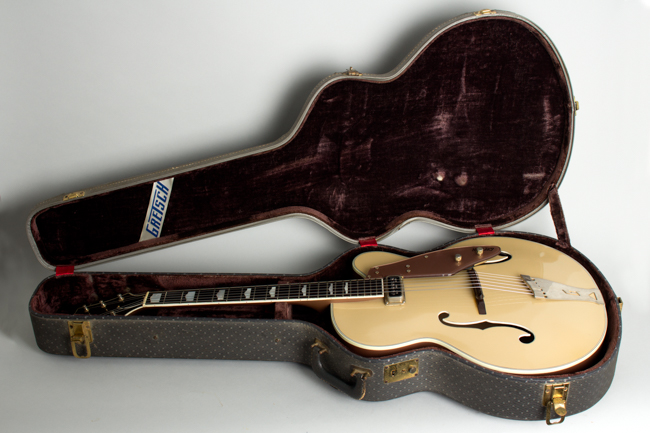 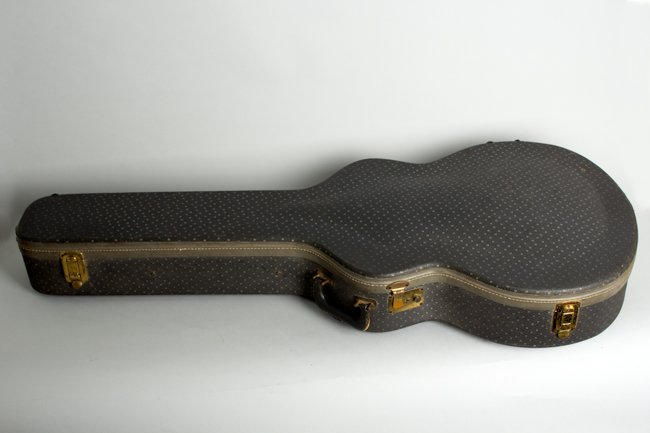 Here is a rare and stunningly clean 1957 Gretsch guitar, a truly lovely example of a mostly forgotten high-end model. The 6199 convertible was the Brooklyn boys' answer to the problem of how to electrify a large-body archtop while retaining a major proportion of the acoustic response. As always with Gretsch, the instrument is unique, slightly skewed from the norm, and full of character!

The PX-6199 Convertible is a 17" full-depth archtop with a single DeArmond DynaSonic pickup suspended above the top, with the tone and volume controls mounted not to the wood but to the floating gold Lucite pickguard. While similar in concept to what many jazz players of the time were doing with the DeArmond company's smaller-coil floating pickups, on this instrument it's all a bit counter-intuitive in detail!

The DynaSonic pickup itself is quite a heavy pickup, designed not to float but to be attached firmly to the instrument's top. Even though it's suspended, there is a large hole cut in this guitar's top underneath it to clear the long polepieces that extend downwards under the coil. To "convert" it to acoustic, removing the electronics would expose this unsightly not-exactly sound hole! Gretsch simply intended the guitar to be played either plugged or unplugged as it stood.

The 6199 is also not a fully carved guitar, so as a purely acoustic instrument it was a bit challenged compared to the high-end carved top Gibson, Epiphone, and D'Angelico instruments it would presumably be competing against. The spruce top itself is quite thin despite its pressed 3-ply laminate construction, so there is a decent amount of purely acoustic tone available.

Despite this apparent built-in contradiction, the 6199 is a very fine instrument, absolutely in the highest echelon of Gretsch product. These were very a limited production guitar, and the serial number batch this one belongs to (233XX) was shared with the equally rare Constellation model acoustic archtop. It is also the only batch of the model from 1957; it's likely very few were actually produced with the estimate for the entire decade's production of the model running to less than 125.

The guitar features a multi-bound top, headstock, and ebony fingerboard with hump-block inlays...some models from this batch substitute the newer "neo-Classic" markers just coming into use. The finish is a fantastic 1950s Populuxe two-tone, with a lighter "Lotus Ivory" top over the "Copper Mist" metallic back and sides. This model is practically unique in offering this sort of automotive livery on what was pitched as a high-end Jazz guitar. This may be one of the things that made it a very rare model -- there were likely few conservative Jazz players drawn to this sort of showy finish.

There WAS at least one, however; while the model was not a big seller, it did attract popular jazz player and Gretsch endorser Sal Salvador and is pictured (and presumable heard) on some of his 1950s recordings. By 1959 the sort of auto-themed name "Convertible" was dropped and the 6199 was renamed as the "Sal Salvador" signature model. It still remained a very seldom seen guitar, while the success of the contemporary Chet Atkins models made the company's reputation.

While a relatively obscure Gretsch model, the 6199 is a very cool and imposing guitar, absolutely distinctive in looks and sound. This amazingly well-preserved example is absolutely one of the nicest '50s Gretsch guitars we have had, proudly back home in Brooklyn!

Overall this is a stunningly clean original guitar, with just a few small signs of use or maintenance over the years. The finish is mostly immaculate, with just a few marks here and there (primarily on the back) and fantastic color that has not faded at all. There is a small area of flaking along the seam of the stacked heel just under where a strap button was added. The seam itself is tight with no separation, and -- unlike many other period Gretsch guitars -- there is no movement of the neck joint at all, with a clean and completely uncracked finish along all neck/body seams.

All finish and hardware are original except for an added strap button at the heel and changed one to match at the tail. These are period and actually kind of cool-looking. The gold plating has worn away on some of the metal parts, most notably the tailpiece and knobs. The frets have been taken down somewhat from the original height. As the guitar shows hardly any play wear this may have been done long ago to achieve a feel closer to the Les Paul "Fretless Wonder"-style setup. There is some chipping to the veneer of the headstock adjacent to the nut, which was probably removed for this work.

It is pretty rare to find a 1950s Gretsch in this sort of condition not just cosmetically but structurally as well. The neck angle is excellent without ever having had or needed a neckset, which is most uncommon. Some players might prefer a bit more meat to the fretwire; this can be rectified with a refret. The guitar plays and sounds excellent as it is, albeit with the somewhat unusual character this model espouses. The original case is also very well-preserved, with the cool gold hangtag (original price -- $320) and some other small pieces of case candy. Excellent + Condition.
×