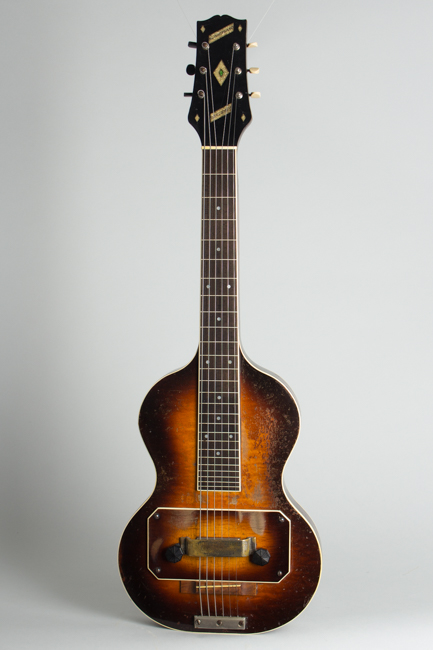 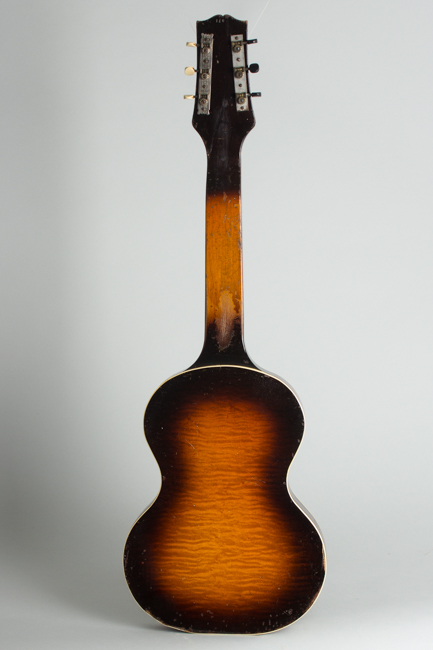 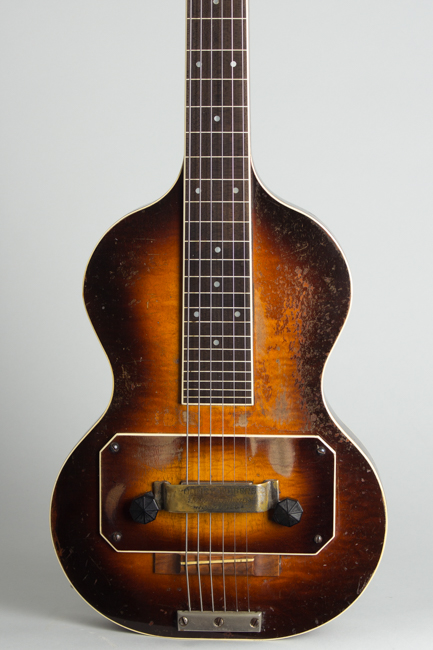 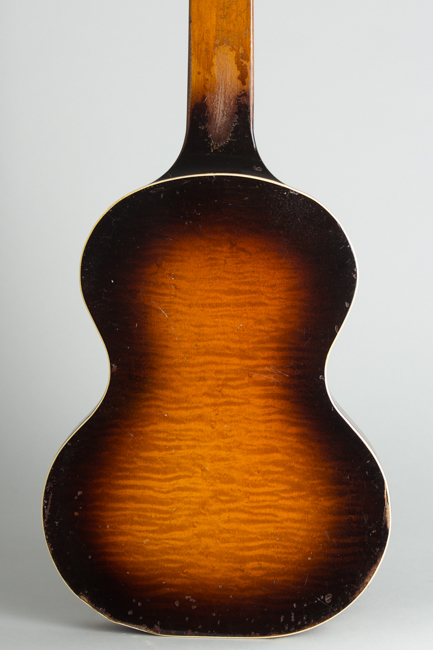 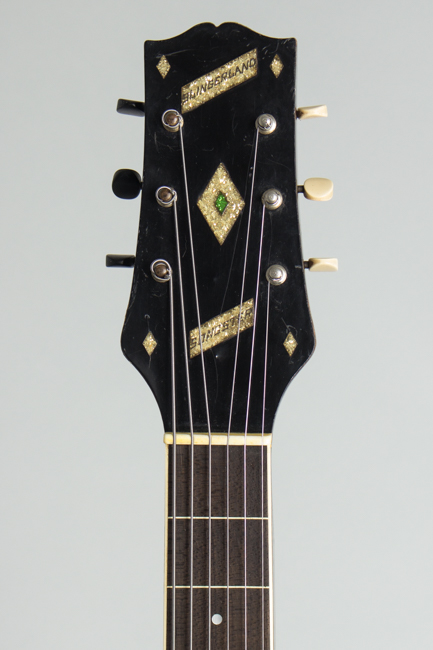 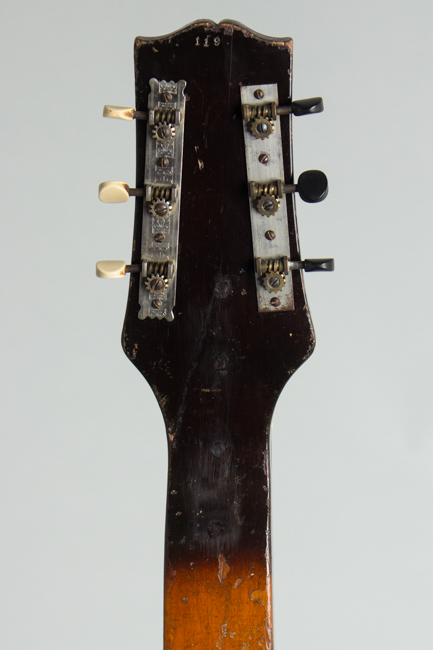 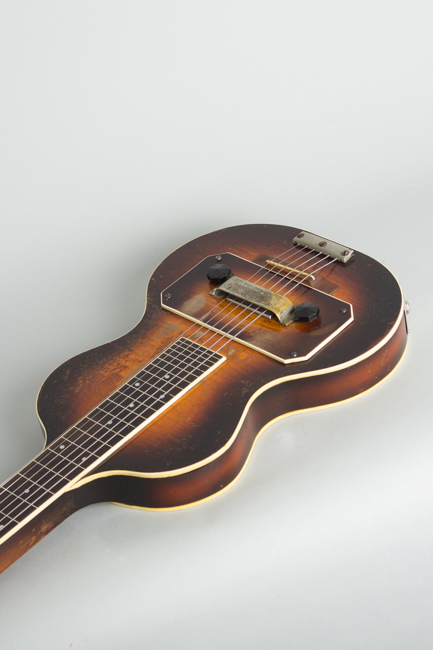 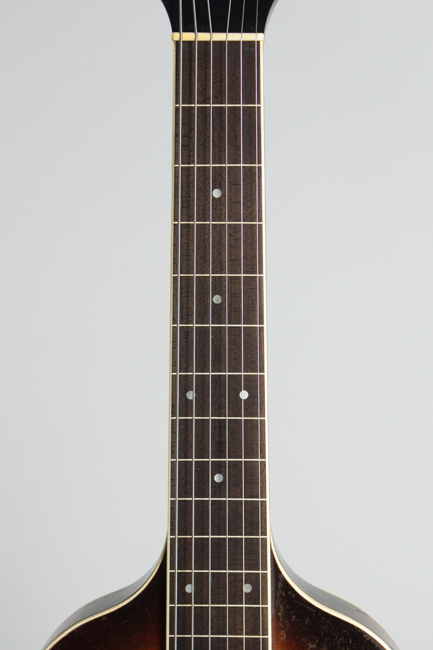 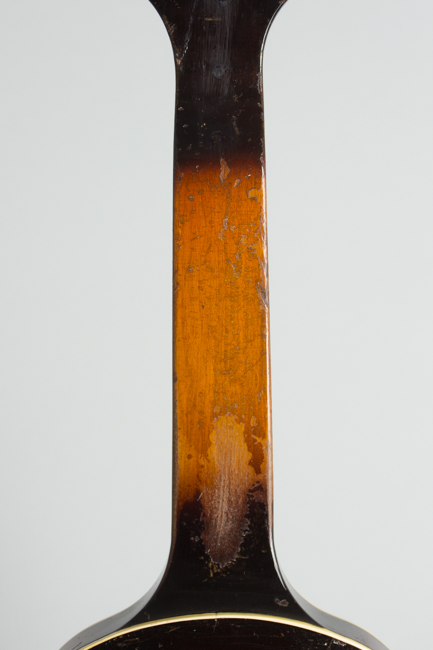 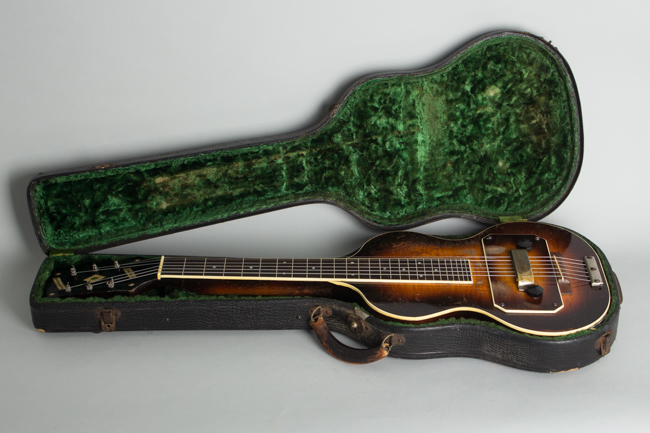 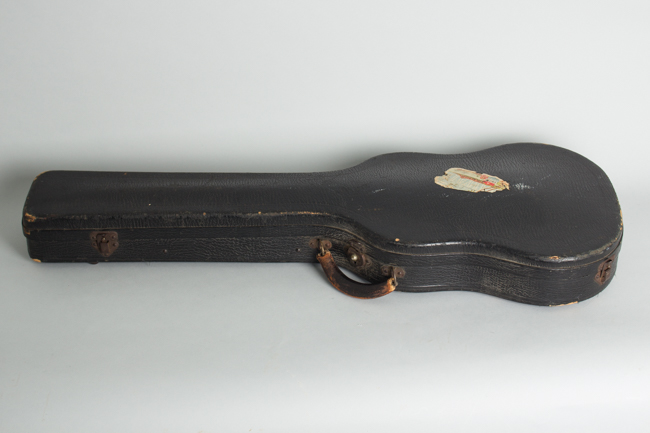 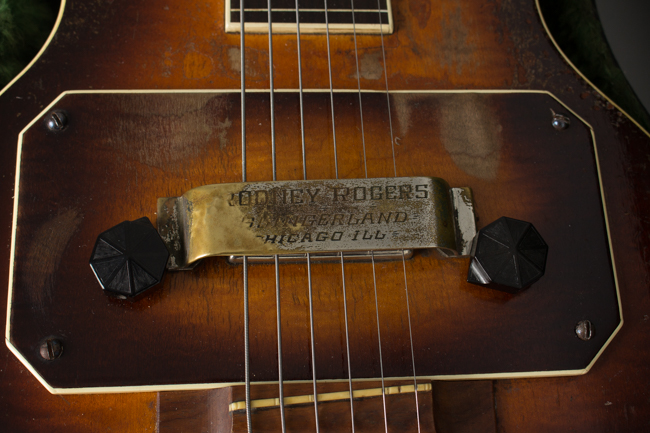 This is a VERY well-played but still original example of this super cool and relatively rare steel guitar, prized among connoisseurs for its great tone and stylish Deco look. This unique example is custom engraved for the original owner at the factory; the name "Rodney Rogers" is neatly spelled out on the bridge cover by the same hand that did the company name and model lettering. He was a recording artist who made at least a couple of sides on the Hawaiian guitar for Brunswick in the 1920s, as "Rodney Rogers Red Peppers". Even years later his band probably gigged a lot...he sure played the heck out of this little guitar! This one has a very early serial #119 that likely dates it to 1936 or early '37; the exact date this model was introduced is lost to history.

This lap steel is the near-identical sibling of the Slingerland Songster Model 401 Spanish -- one of the most obscure yet historical of all early electric instruments. Although hardly remembered today, the Model 401 Slingerland Songster Spanish guitar was the most forward-looking electric of its time, with a design that foreshadows many of the developments in electric guitars in the 1950s and beyond. Slingerland basically had the elements that would make up Gibson's Les Paul in place by 1937, but never followed through!

The Slingerland name is generally associated with drums; the company's "Radio King" line of the 1930s was a definitive instrument of the big-band era and established the layout of the modern drum kit. The brand is otherwise mostly familiar to vintage banjo enthusiasts, as they made thousands of the cheaper banjos of the '20s and '30s. Even when prospering with drums, the company continued to make stringed instruments up until World War II. Their acoustic flat-top and arch-top guitars, mandolins, and ukuleles ranged from cheap student-level "bangers" to professional-quality instruments; the best were solidly built and good-sounding.

This "Songster Model 400 Hawaiian" was Slingerland's first foray into amplified instruments and shares most of its design elements with the Model 401, except for a squarish neck profile instead of the round Spanish neck. It is broadly similar to the contemporary Gibson EH-150, though there were design differences. The body has flamed maple veneers over the top and back, and a bound rosewood fingerboard. The black plastic-covered headstock matches the Songster guitar line, with diamonds of sparkle-infused plastic inlaid into the veneer; a typical touch for a drum company.

The pickup is a rather unique and quite powerful six-coil design with humbucking properties -- two decades before Gibson claimed that idea. Each string has its own coil beneath it, with a large U-magnet hidden under the wooden coverplate providing the "juice" to sense the strings above. Tone and volume controls are located on either side of the metal handrest/pickup cover, which is daintily engraved with the company's name (and Rodney's) in flowing script.

The Model 400 is believed to have been introduced around mid/late 1936 and discontinued by 1939. It was offered as a set with a matching amp that seems equally rare. The guitar was priced at $75, plus $15 for the fairly deluxe case and another $75 for the amp. This was exactly in line with Gibson's pricing, and as with the Kalamazoo rival you could purchase the set of guitar, amp, and case together for $150. Despite its relative obscurity, the Slingerland Model 400 was one of the most advanced electric fretted instruments of its day. And it still SOUNDS fantastic!

This guitar has had a very active life and is quite seriously played and heavily worn, but boy does it have a vibe! There is quite a bit of loss to the finish overall, mostly on the top with wear through to the lacquer where the player's fingers simply wore through into the wood in a number of spots. The metal handrest has the bass side actually worn down into the surface. The back of the neck shows fairly heavy wear spot of wear where it went over the player's knee. There are other dings and scrapes to the finish on the back of the neck, possibly from the jackplug on the hard-wired output cord being loosely packed inside the case over the years.

There is an old crack repair to one side of the headstock running from the treble side throat about up to the lowest tuners; this was solidly but somewhat inelegantly repaired long ago, it looks like with a couple of screws or pegs. The tuner strips are period but mismatched; it's hard to tell what was there originally. The original hard-wired cloth cord has been replaced with a jackplate in the original spot on the bass side. Internally the pickup and wiring remains original except the tone pot is replaced; the original is still in the case. The very cool (and even rarer than the guitar) original hard case is included, with a sticker on the lid indicating it flew to Hawaii on United Air Lines back before that was a common thing to do! This guitar sounds great, looks scruffy as heck, and has a great story to tell! Very Good + Condition.
×