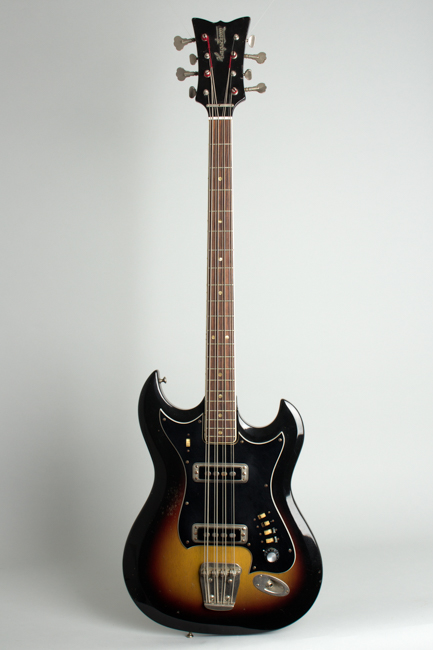 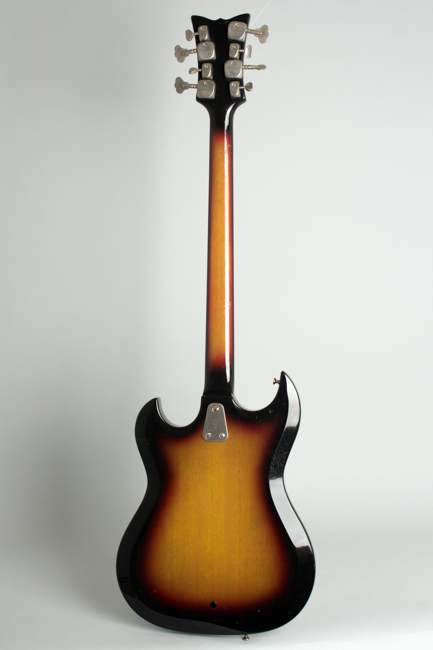 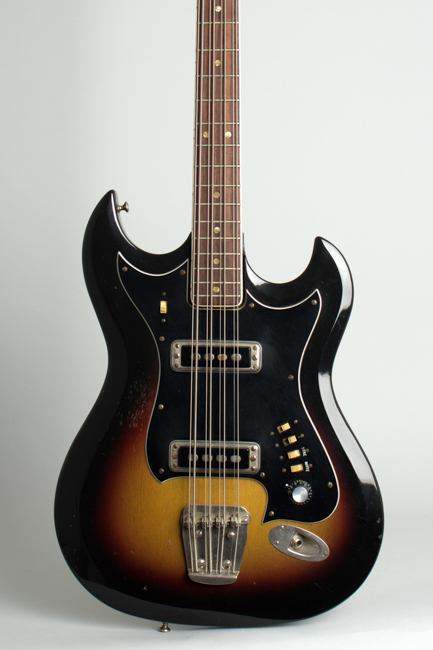 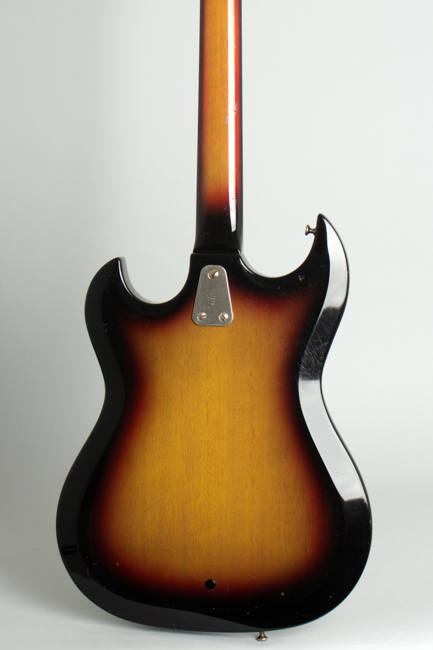 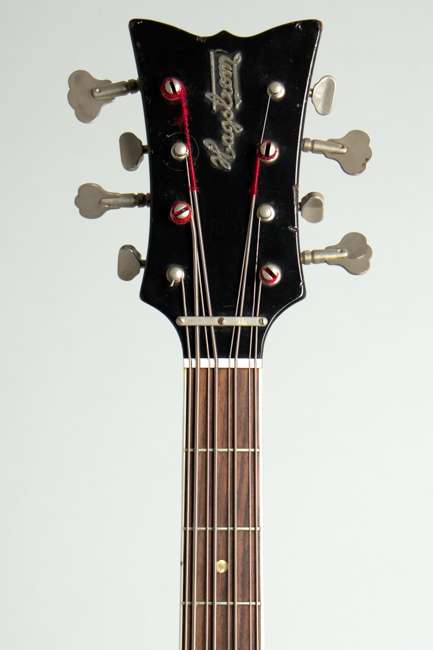 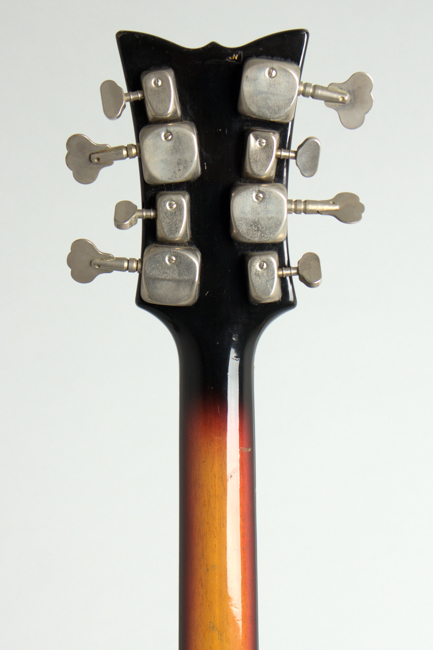 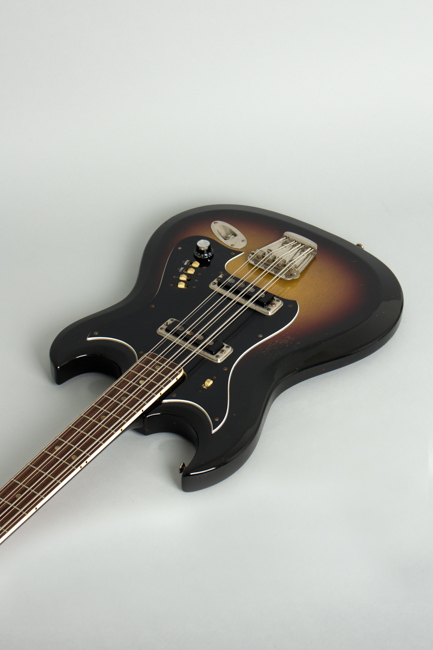 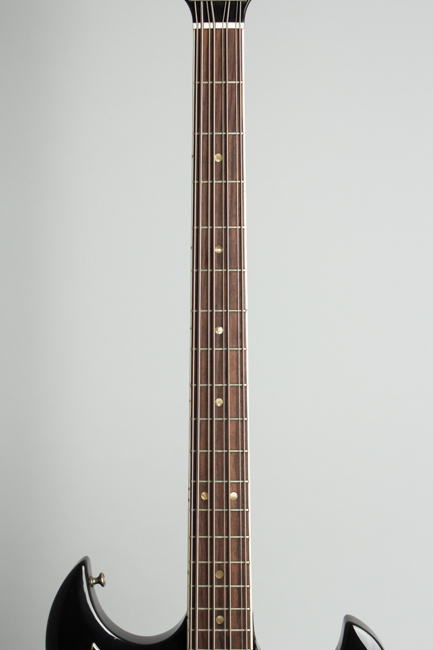 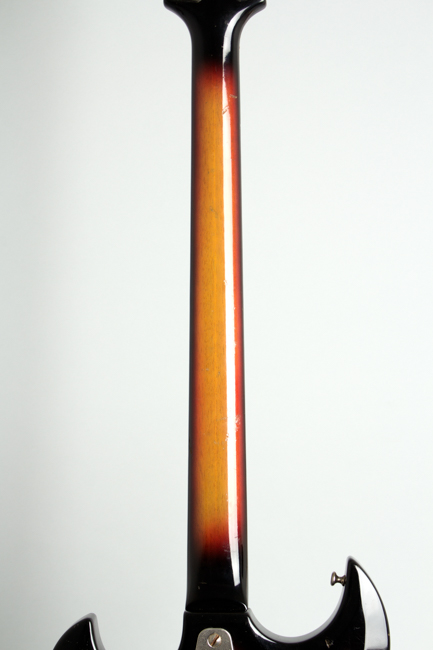 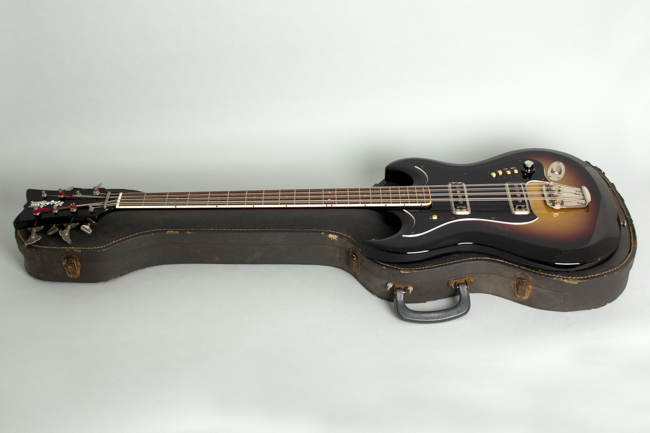 One of the more endearing oddball electric basses of the 1960s, the Hagstrom H-8 was the only production 8-string bass of the decade (Rickenbacker made a few on custom order) and remains one of the few of its type ever attempted as a standard catalog instrument. Essentially the bass version of a 12-string guitar, the H-8 is strung in octaves with a higher string above each bass string. The sound is similar to a bass and guitar playing in unison and creates a very rich tonal effect.

The features and fittings are typical for period Hagstrom basses. The sculpted double-cutaway solid body is mated to a very slim neck, amazingly so for an 8-string instrument. It mounts two excellent-sounding single coil pickups and a bank of slide switches for controlling them, with only a single volume pot. Despite its imposing appearance it's very easy to play, with a standard 30 1/2" short scale fingerboard, low action, and Hagstrom adjustable bridge. Perhaps the oddest feature visually is the mix of large and small Van Ghent tuners on the headstock. The body is finished in a muted dark sunburst, one of two color options available.

The H-8 enjoyed a brief burst of popularity in the late '60s, being the only one of its kind generally available in a musically adventurous era. It is notable in retrospect mostly for appearing on several Jimi Hendrix cuts played by both Noel Redding and Hendrix himself. The admittedly specialist instrument saw some success but slipped out of production by the beginning of the '70s and is fairly rare today.

The sound is unique and often underappreciated. It makes an excellent addition to any studio arsenal, perhaps more as an overdub/accent piece than a standard bass. In the late '70s, Cheap Trick took the idea to further extremes with Tom Petersson's 12-string basses, which created a sort of bass-and-rhythm-guitar wall of sound onstage. The Hagstrom H-8 remains one of those under-utilized sonic gems, still waiting to be fully exploited and appreciated!

This is a nice example overall, a bit worn in but an excellent player. It shows wear from being played; there are some dings and dents to the lacquer, most notably on the top, but no major finish loss or damage. The neck finish has some scrapes and dents, and there is a spot on the face with multiple small dents to the lacquer where it looks like someone was keeping time with a pick, or some such. The only non-original piece of hardware is the volume knob, a Gibson style piece not too different from the original.

The neck is nice and straight -- the Hagstrom aluminum-core neck with an adjustable steel truss rod is one of their best features -- and the bass plays very well. The instrument is still housed in the original grey shaped chipboard case, which is battered but functional, for storage at least. At some point the hinges were removed and there are latches mounted all around the edge, so the lid is now a lift-off-to-open design. It's sort of odd but it works! Excellent - Condition.
×