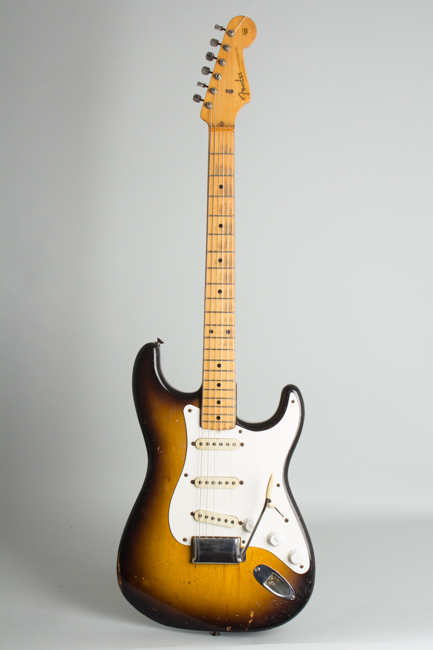 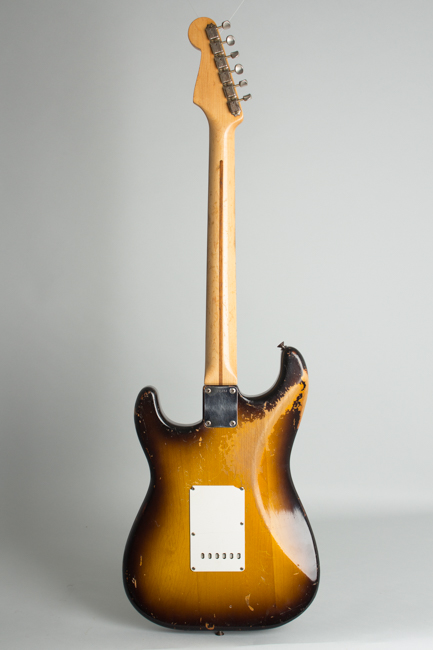 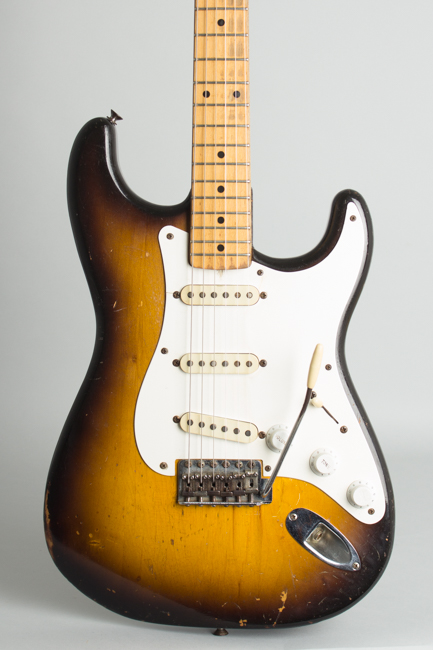 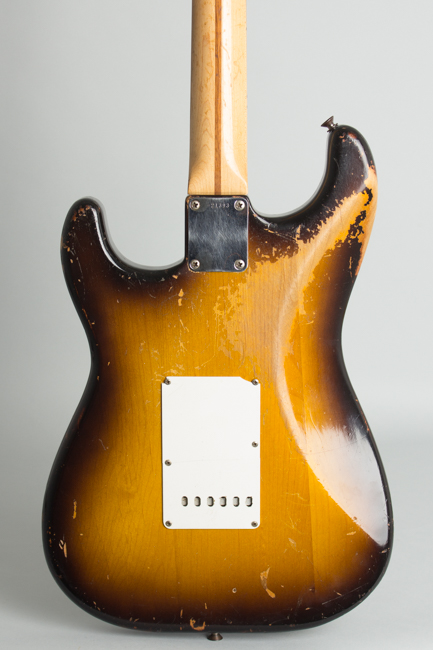 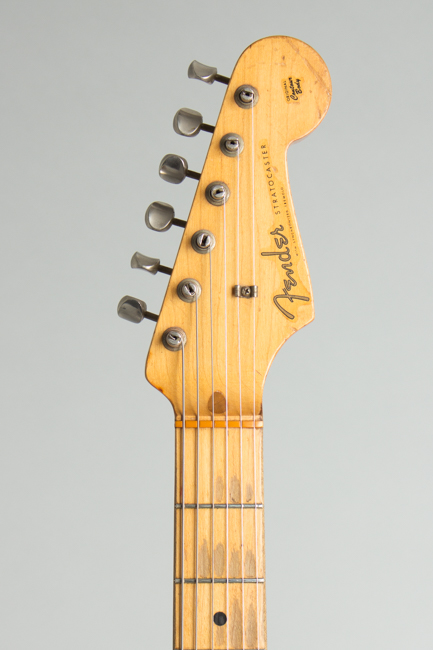 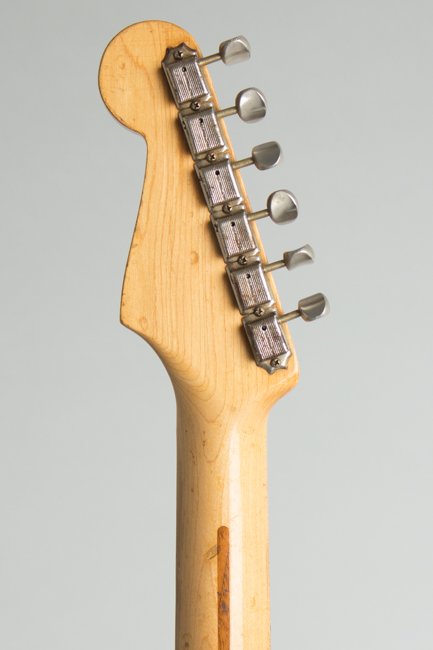 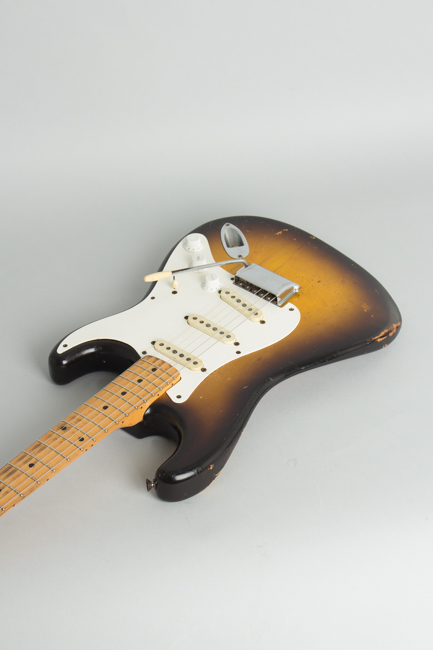 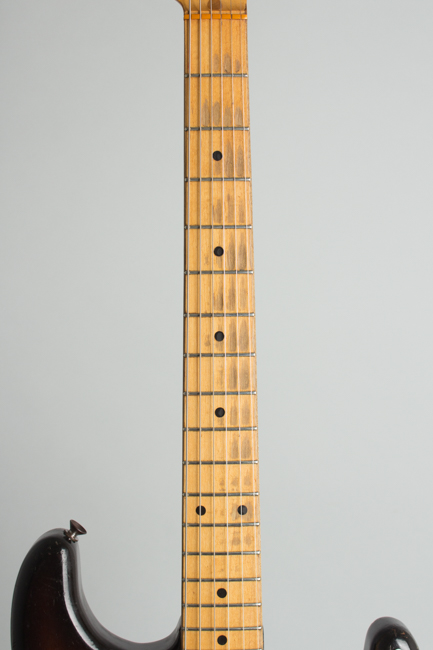 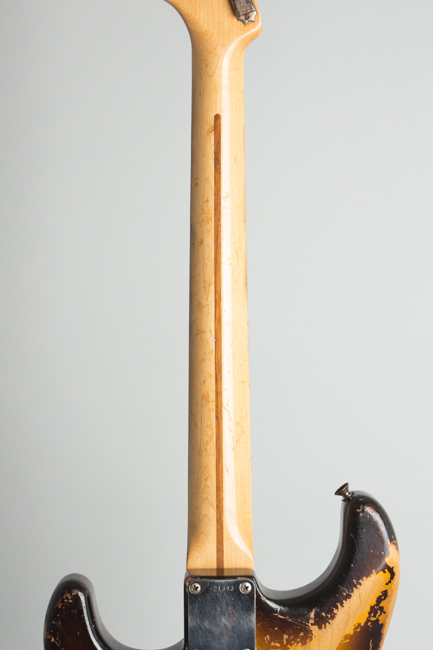 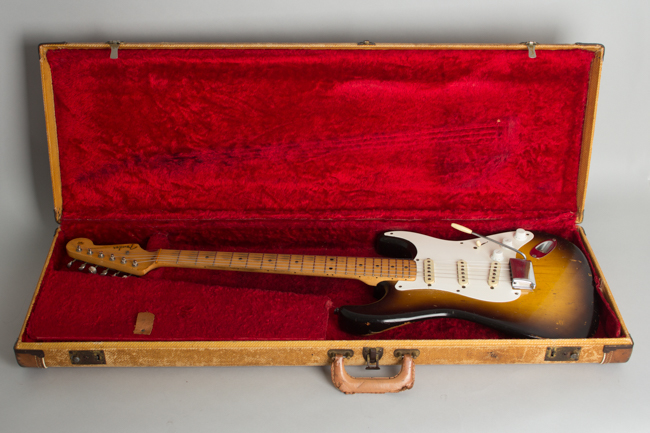 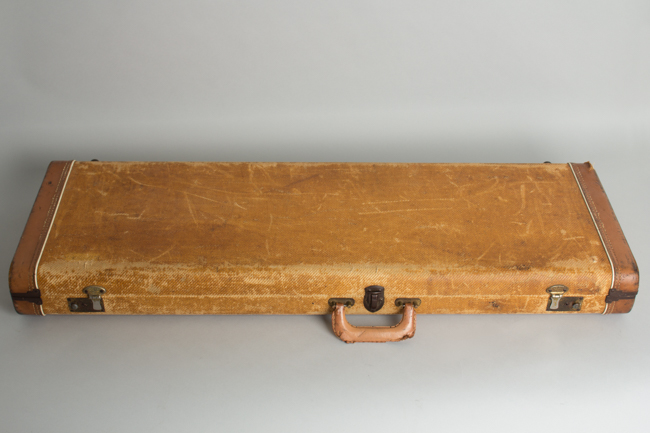 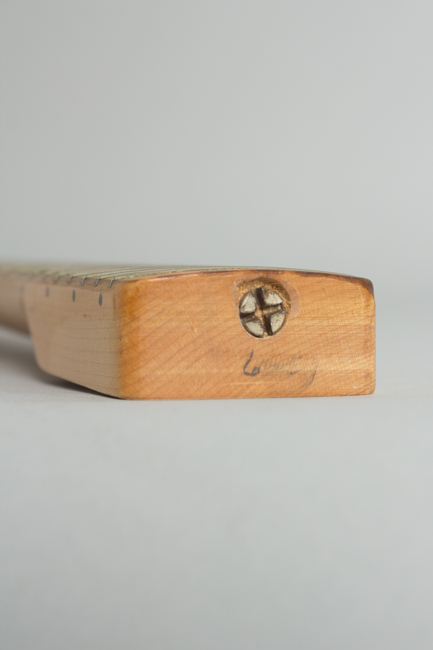 This lovely well-worn Stratocaster dates to mid 1957, several years after the model's introduction but a time when it was still the most futuristic fretted instrument on the market and the top showpiece for Fender. The body sports the older 2-color color sunburst lacquer finish which would be supplanted the next year by the flashier 3-tone 'burst with an added red layer. The body is dated 5-57 in the trem cavity, although the claw must be removed to make this clearly visible and exhibits particularly nice sweeping contours on the back; these were all done by hand on a belt sander and there is a decent amount of variation even in a given year.

The great-feeling maple neck is pencil dated 6-57, legible although the "7" is fairly well blurred. It has a subtler "V" profile than many from this period, without a hard spine along the back. The natural lacquer finish is still nice and clear, without the fine checking and tendency to flake often seen on '58's. The maple fingerboard showing the typical wear seen on well-played 50's Fenders.

"Under the hood" the guitar remains nicely original. The pots are a matched set date coded to the 15th week of 1957, and all wiring and solder joints remain as they left Fullerton. All three pickups are fully original and sound great, the rubber grommets under the screws have been replaced but the originals are included. The original three-way switch has a very solid feel selecting the "in-between" tones easily for some truly righteous Strat sounds.

This guitar has seen some moderately heavy use but has managed to avoid the indignities that many old Fenders went through like refinishes, humbucker routs, jumbo refrets, and locking tremolos. It remains as Leo and his crew intended, a versatile tone machine par excellence. It is simply a wonderful-feeling 7 lb. 8.4 oz. guitar, a genuine Fender relic and a great reminder why the world fell in love with the Stratocaster in the first place!

Overall length is 38 1/4 in. (97.2 cm.), 12 1/2 in. (31.8 cm.) wide at lower bout, and 1 3/4 in. (4.4 cm.) deep. Scale length is 25 1/2 in. (648 mm.). Width of nut is 1 5/8 in. (41 mm.).
This Stratocaster shows the signs of decades of use but no later abuse or notable alterations. There is wear including dings, dents and scrapes to the body finish just about everywhere, including a large swath of belt buckle wear to the back. The original single-layer pickguard has cracks on either side of the neck pickup, previously glued and neatly stabilized from below with metallic tape. A few of the screw holes are a bit hogged out as well but there are no other cracks. The trem cover plate does have a couple of broken corners and is neatly cracked through the middle; it is still perfectly functional although many players remove it anyway.

There is a decent amount of wear to the fingerboard from the first to the 13th fret, mostly on the treble side. Some of the edges of the neck are worn away as well but the finish on the back had dings and dents but is back is surprisingly intact. The frets are low but serviceable; they look like the original style wire but is almost certainly an older refret done very well without any damage to the maple. The Fender decal is quite well preserved. There is some wood lost around the truss rod adjustment nut from some ham-fisted adjustment attempts but nothing that affects operation of the rod itself which still does its job perfectly.

All external hardware is original including Kluson Deluxe tuners, knobs, pickup covers and even the snap-on bridge cover, nearly always lost. Internally the pickups and wiring rig appear untouched, with correct original pots, cap, switch and solder joints. The replaced rubber mounting grommets are the only change. The bridge is original except some saddle springs and all the height adjustment screws are newer, fairly typical as the originals are often well rusted by now. Even the trem arm is original with some rust but amazingly never broken or lost. This old Stratocaster sings with the magical sound typical of its two-tone maple neck breed, easily conjuring up the ghosts of Eric Clapton, Buddy Guy, Richard Thompson or any of a number of early Strat-slinging idols. The original tweed case is still present, worn but still perfectly functional. Overall Very Good + Condition.
×