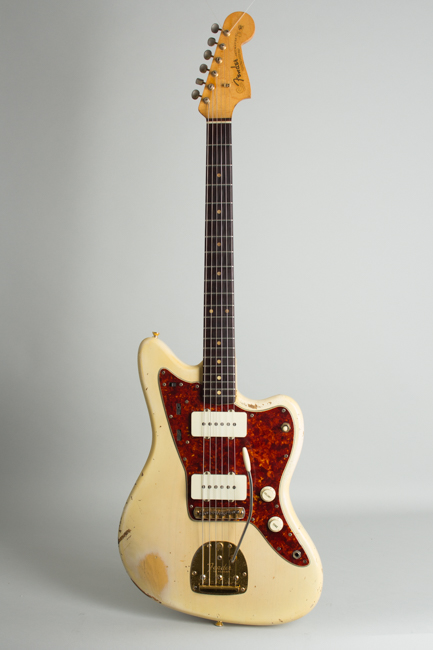 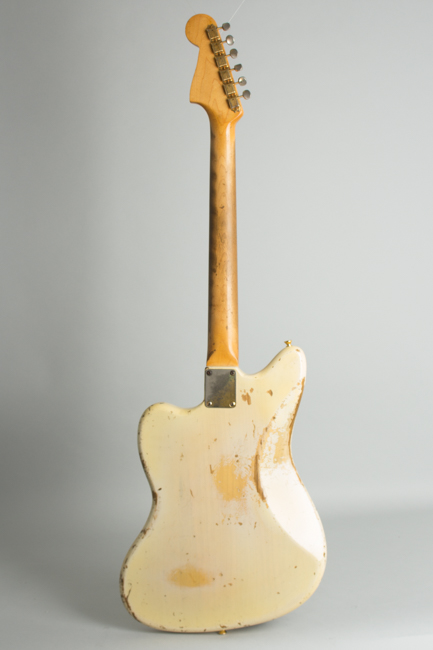 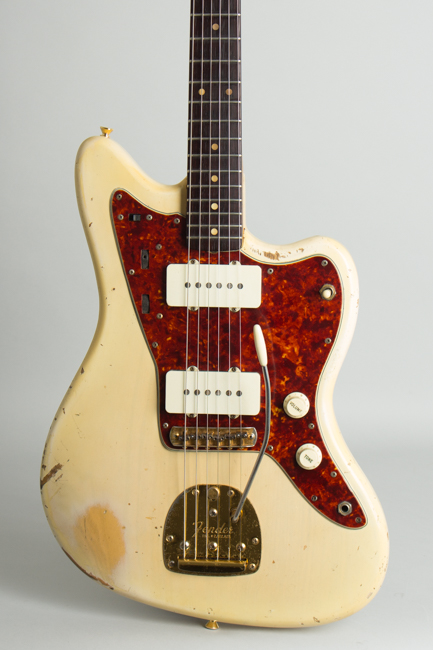 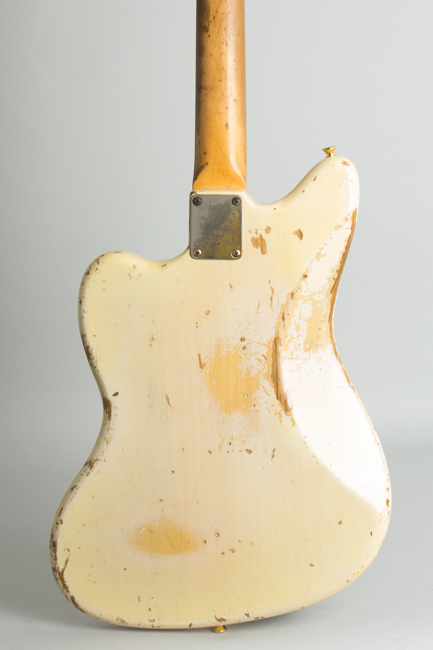 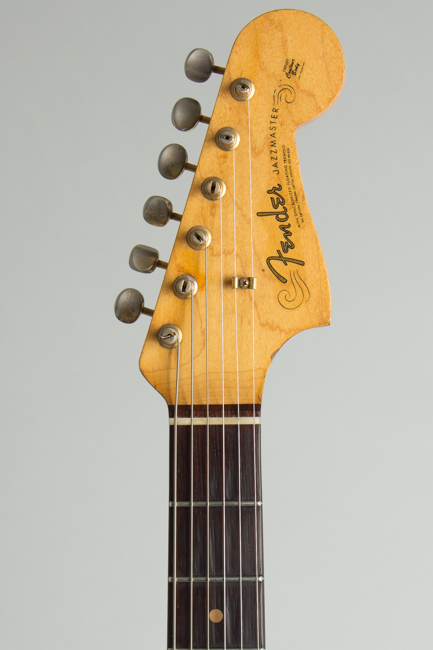 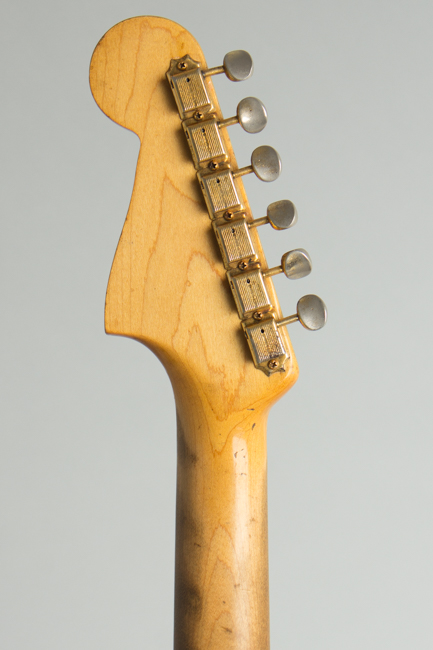 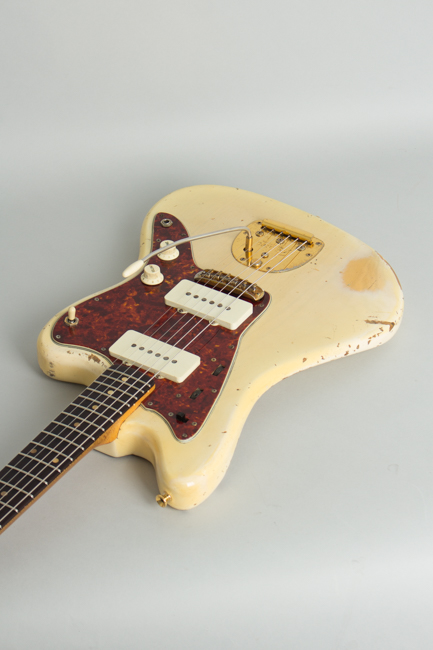 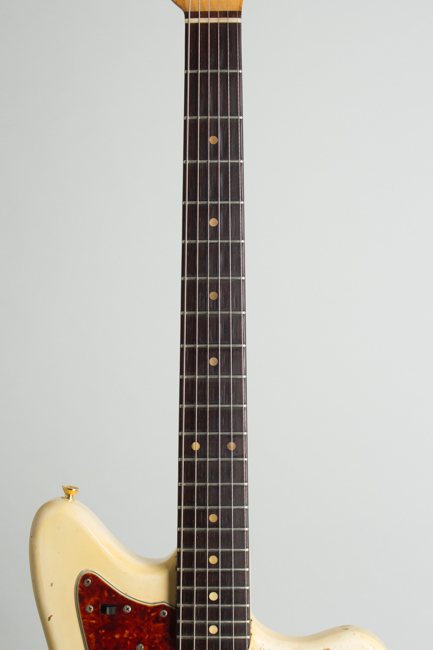 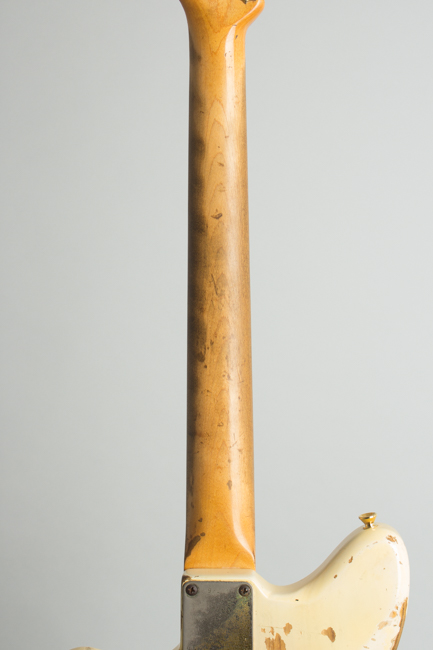 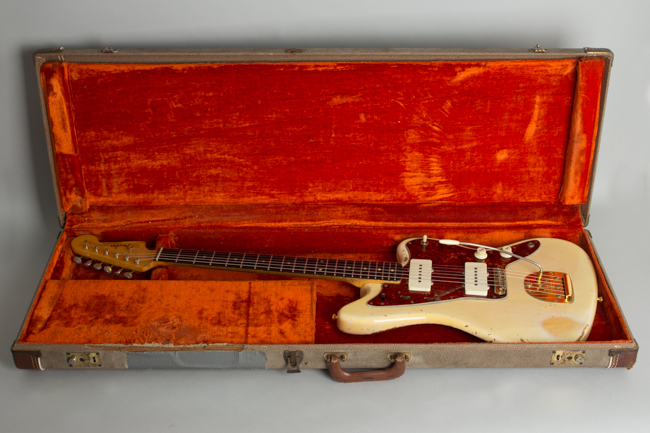 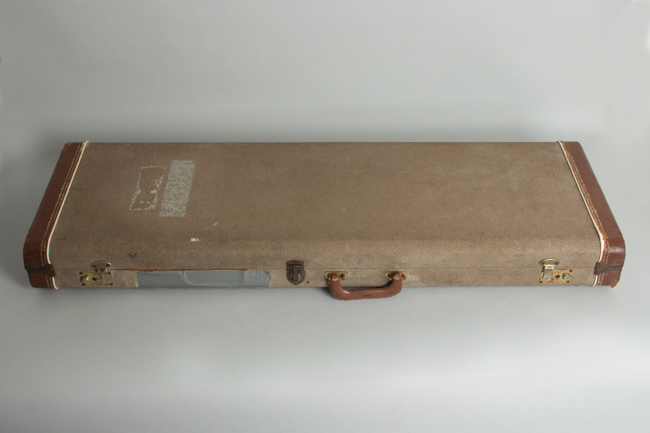 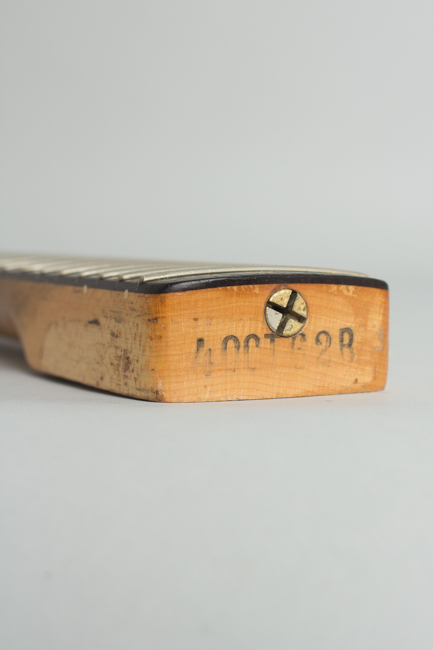 Vintage Fender Jazzmasters don't come a lot cooler than this one, which has not only a rare custom color finish on the body seldom seen on this model but the added extra-cost option of gold plated hardware. This guitar has a neck date stamp of October 1962 and the latest pot date is the 9th week of 1963 so it was assembled less than a year after the Jazzmaster was supplanted by the Jaguar as Fender's top of the line guitar. That didn't stop whoever ordered this one from going for a deluxe feature package making their new Jazzmaster both as flashy and classy as could be had from Fullerton! The gold hardware was a catalog option rarely exercised by customers or dealers, and is found on only a tiny proportion of surviving Fender guitars. These two options added over $70 to the price, making this guitar and case a nearly $500 purchase when new.

While custom color Jazzmasters per se are not exceptionally rare, they are most often encountered in the solid reds, white or blues that made up the bulk of Fender's available finish palette. This see-through blonde guitar has a subtle but important difference from all other Jazzmasters, sunburst or otherwise. The body is made of ash, like a Telecaster, not the alder used for all other finish options. This was done because the more pronounced grain of that wood showed through the semi-opaque lacquer better than the generally plain alder. Ash was more expensive, so it was reserved for blondes, which in this case really do have more fun! The ash/blonde combination remained the standard on the Telecaster only, meaning any other model had to be run up specially to order at the factory.

Other than the finish this beautiful Jazzmaster is loaded with classic early 1960s pre-CBS Fender features. These include a second pattern "round-lam" unbound rosewood fingerboard, still heavier than the later '60's style with the pre-'65 "clay" dot inlay. The pickguard is the dark nitrocellulose tortoiseshell style which was a Fender trademark at the time. This contrasts beautifully with the aged blonde finish, which has some grain showing through especially visible in the worn-through spots. All the hardware is heavily gold plated including the trem, bridge, neckplate, screws, Kluson Deluxe tuners and even the truss rod adjustor. The pickups are the standard white-covered Jazzmaster units with the two-circuit wiring introduced with this model.

These early '60s Jazzmasters are exceptionally fine instruments, and this was obviously a specially chosen and cherished one. While they never caught on with the jazz artists Leo intended them for, this was a quite successful guitar at the time, seen with many period players in a variety of musical genres. After a long period in the shadows the Jazzmaster has been increasingly popular over the last couple of decades with new generations of performers re-discovering its particular charms. This one has survived years of hard playing and much love, a true piece of the Fender cross still in its original brown Tolex hardshell case. At 8 1/4 pounds it is lighter and handier than many Jazzmasters, and it survives battered but beautiful, with a major mojo and sounding fantastic, ready for its next 60+ years.

This rare and beautiful Jazzmaster is certainly a genuine Fender "relic". Somebody (we'd like to think the person who custom ordered it originally) played it a great deal. The guitar shows quite a bit of play wear over the entire instrument but remains original except for a later refret with somewhat taller wire than the 1962 spec. There is wear to much of the finish including dings, dents and scrapes to the body finish, most heavily on the edges, with some larger belt buckle spots into the wood on the back. There is a decent sized spot smoothly worn down to the undercoat on the top arm wear area.

The neck lacquer is heavily worn down with that glorious "old Fender" feel. The frets have hardly any wear, the refret does not look recent but the guitar appears to not have been played much since it was done. The fingerboard has some old divots that were somewhat smoothed down during the refret but not filled in; these are not so deep as to impede playability.

The pickguard has less shrinkage than many with no broken corners, there is some wear from play into the surface below the pickups. The strap buttons are the correct style but more recent but all other hardware is original and everything works as Leo intended. The gold still shines though there is noticeable wear to much of the plating...Fender used a heavier gold treatment than Gibson or Gretsch so it has lasted better than many others would have. Only the snap-on bridge cover is missing; even the trem arm remains original though nearly all the gold is gone from it.

This ash-bodied Jazzmaster is lighter than many from this period and is an easy handling, great playing and fantastic sounding guitar. It has both considerable brightness and an unusual warmth, and sometimes when we play these very rare ash-bodied "Non-Telecaster" vintage Fenders we lament that they ever switched to alder as the standard wood in Fullerton. It is still housed in the original brown Tolex HSC which is generally solid with one damaged area on the top edge patched with duct tape. Overall Very Good + Condition.
×