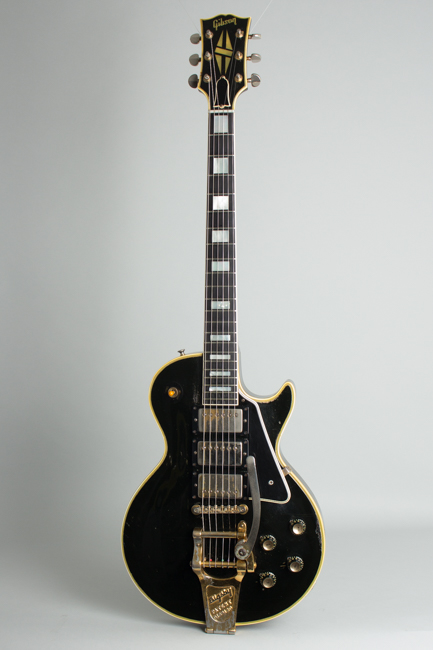 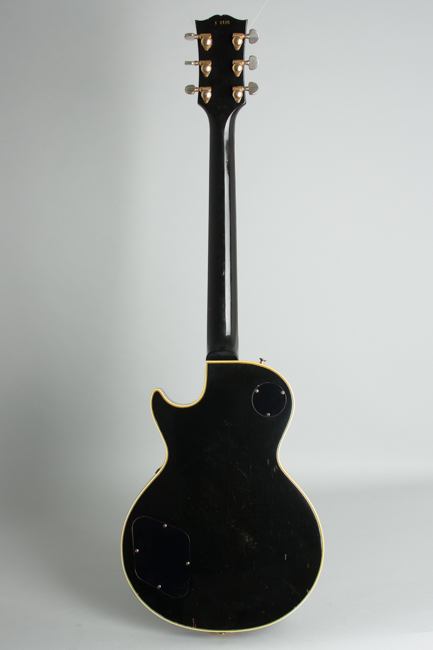 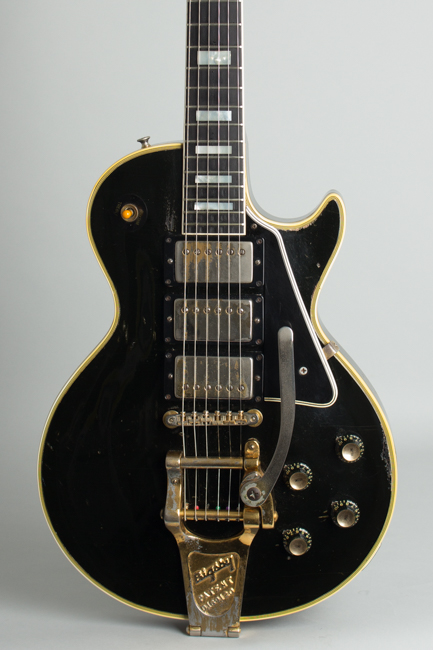 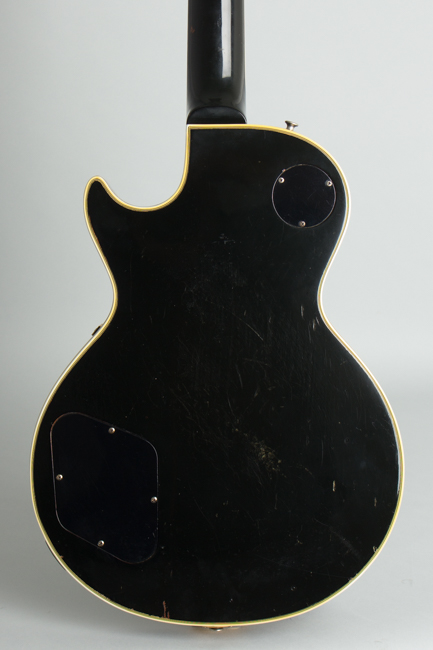 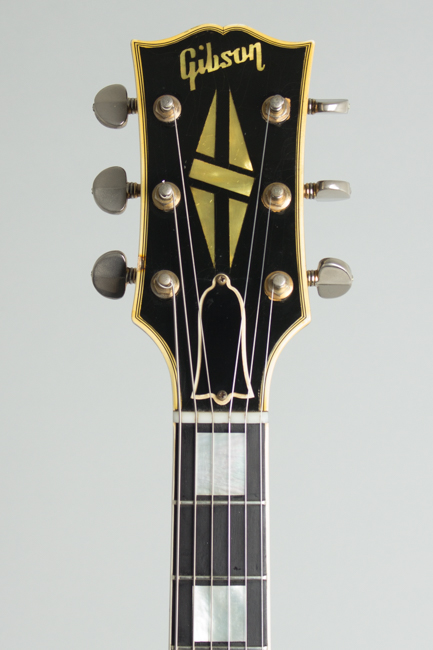 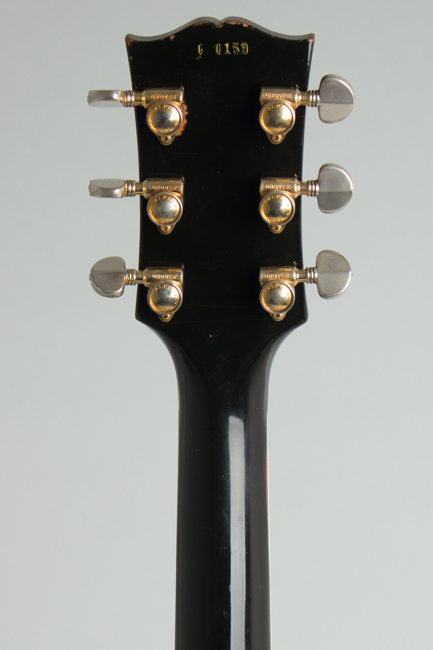 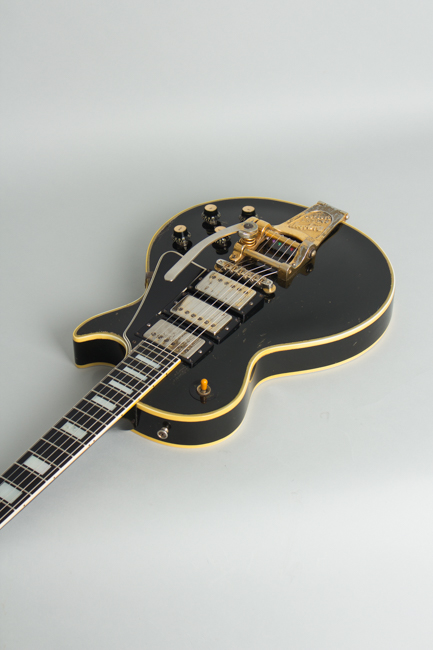 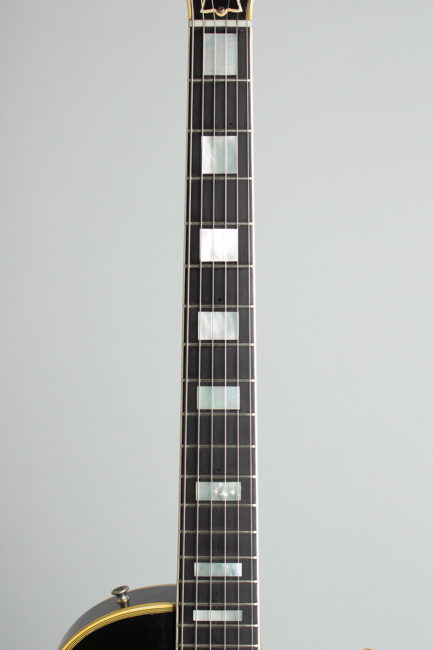 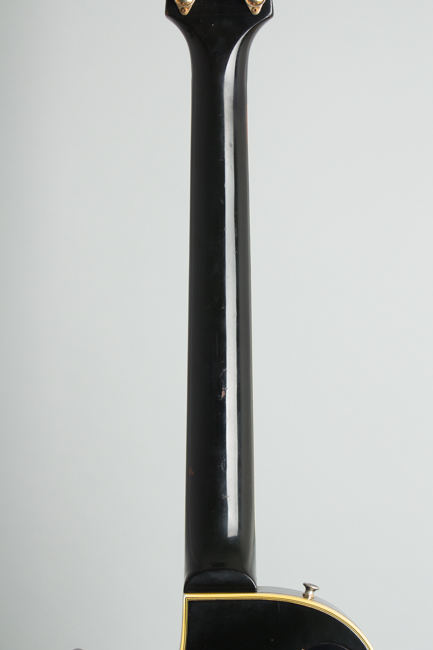 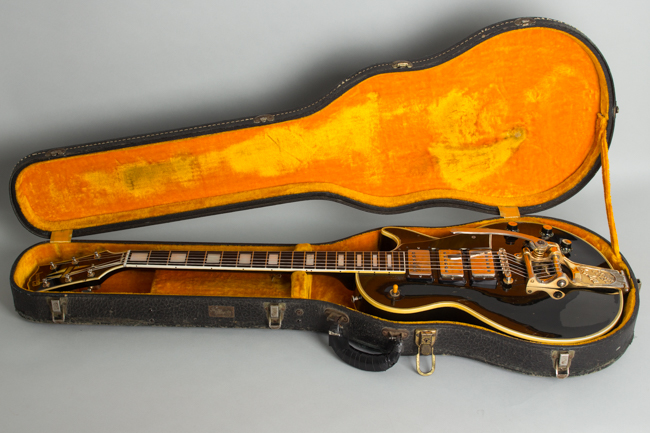 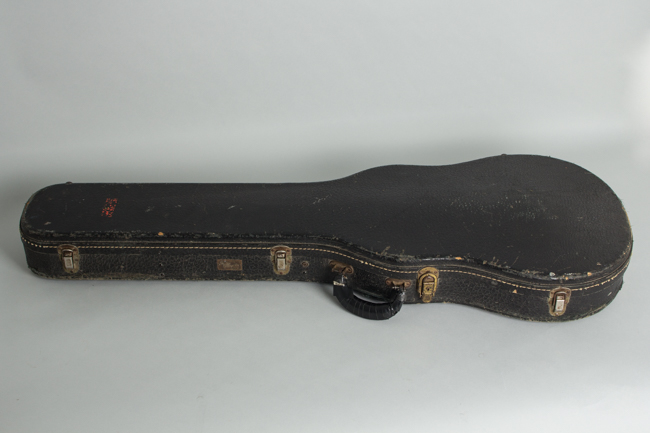 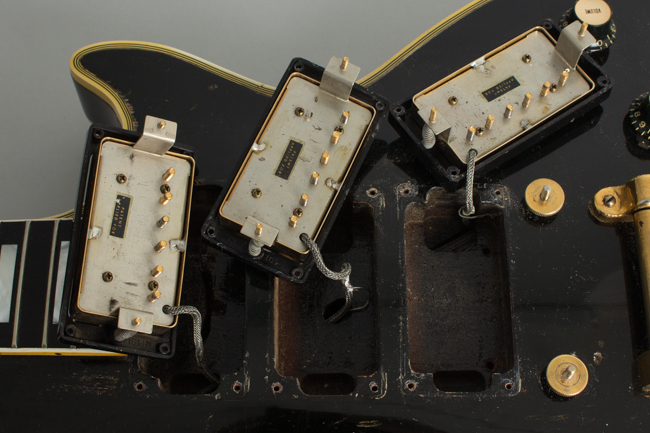 The simultaneously elegant and badass Les Paul Custom was Gibson's top-of-the-line solidbody for the 1950's, a shining "Black Beauty" of a guitar with gold plated hardware and deluxe appointments drawn from the company's flagship archtops. The model was introduced in 1954 as Les' personal choice from the original signature series; he and Mary Ford performed for the rest of the 1950's on modified Customs. The gleaming black top was specifically Les' idea-he called it a "tuxedo effect" and insisted it made the player's hands stand out to the audience!

The Custom has a number of other features unique to the model; the carved-top solid body is made entirely of mahogany, with no maple cap. The bound fingerboard is ebony with pearl block inlay, and the elaborate split diamond inlay on the headstock is shared with the Super 400, Gibson's most expensive guitar. All hardware is gold plated and the body and headstock are multi-bound. The Custom was the first Gibson to feature the then-new Tune-o-Matic bridge, and the only 1950's solidbody to carry three pickups.

This latter point spotlights a major change was made to the instrument in 1957. Instead of the previous twin single-coil pickup outfit the Custom was fitted with three of the new humbucking pickups designed by Seth Lover, taking up much of the face of the guitar. The switching is eccentric, offering neck pickup alone, bridge alone or bridge and middle out-of-phase, which was then new sonic territory for Gibson solidbodies. The Custom's all-mahogany body tends to give the instrument a subtly mellower sound than the maple-capped standard model, while the PAF pickups offer an amazing range of tones from a jazzy purr to an all-out scream, from deep crunch to an almost Strat-like twang.

This particular instrument is one of the very first guitars shipped in 1960; the old-style 1950's ink stamped serial number registers it as the 159th solid body of that year. It still has the much-loved round backed "59 neck" instead of the shallower flat profile 1960 style that would shortly be introduced. The three PAF pickups are original and undisturbed with a wiring rig built on pots dated the 33rd week of 1959. A year later the model would be re-designed into the SG-style Custom, and the black beauty disappeared for years.

This instrument is additionally equipped with a factory gold-plated Bigsby tailpiece, confirmed as original by the lack of stop tailpiece holes in the top. At just exactly 10 LBS this is a substantial feeling instrument but one of the lighter Bigsby Customs out there. It shows some general wear but no abuse or major repair, and is simply a phenomenal playing and sounding instrument. It conjures up the ghost of "James Patrick Page, Session Man" who prior to forming his own little combo was renowned around London for his fire-y lead guitar work on hundreds of records, played on a Les Paul Custom just like this one. Many other players since have made the 3-pickup Custom part of their arsenal, and despite the acclaim surrounding the sunburst Standards, there are some out there who consider this Black Beauty the ultimate Les Paul.

Overall length is 39 5/8 in. (100.6 cm.), 13 in. (33 cm.) wide at lower bout, and 2 in. (5.1 cm.) in depth, measured at side of rim. Scale length is 24 3/4 in. (629 mm.). Width of nut is 1 11/16 in. (43 mm.).
This guitar has a decent amount of honest play wear but remains a nicely original instrument. Like the majority of these it has been refretted; the original very low thin "fretless wonder" frets are rarely in playable condition on original Customs and most modern players find them awkward at best even in perfect condition. This guitar has been very neatly refretted with wire similar to that used by Gibson in the mid '50's and plays perfectly with a feel consistent with its original period.

There is general wear to the finish, mostly in smaller spots of dings, dents and scrapes with no large areas of loss. There is some belt buckle wear into the back but no large worn-through areas. The top shows some pickwear just above the fingerboard down to the wood, with a similar slight loss on the edge of the cutaway. A deeper area of wear into the wood lies on the top at the outward curve of the body just under the knobs. The back of the neck is comparatively clean with just a few small dings.

There is a small cigarette burn through the binding of the bass side of the headstock, a sort of "mark of the times' on many old guitar born in the era when nearly all guitarists smoked! The truss rod cover was mounted upside down for a time and the faint outline of that is still visible on the headstock. The nut appears to be original despite the refret.

The gold plating shows some fairly heavy wear overall, as is typical. Much of it is gone from the pickup covers and some of the Bigsby. The pickups themselves are undisturbed original PAF's and sound fantastic in all positions. All hardware is original with the exception of the gold-capped black knobs, which are authentic older Gibson parts correct to the model but of a style dating to a couple of years after 1960. It is possible they were switched out early on by an original owner. With the exception of these and the more player-friendly frets this Black Beauty is as it left Kalamazoo in 1960. The "Rhythm/Treble" ring on the switch is mounted upside down, but it seems to have been this way for a very long time. We'd be happy to turn it around if desired but it's sort of a signature of this old gal that shows some scars but has a vibe second to none. Overall Excellent - Condition.
×