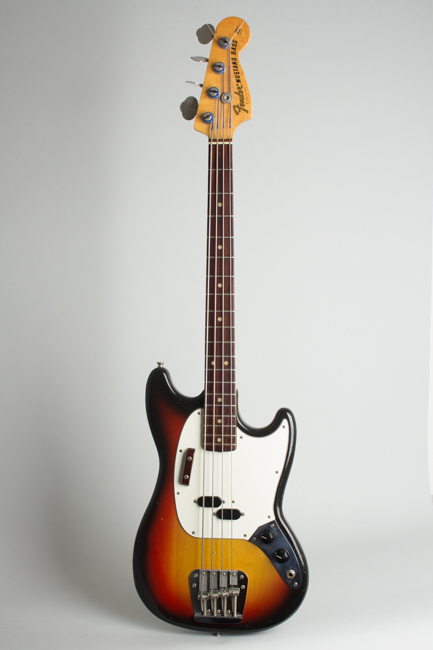 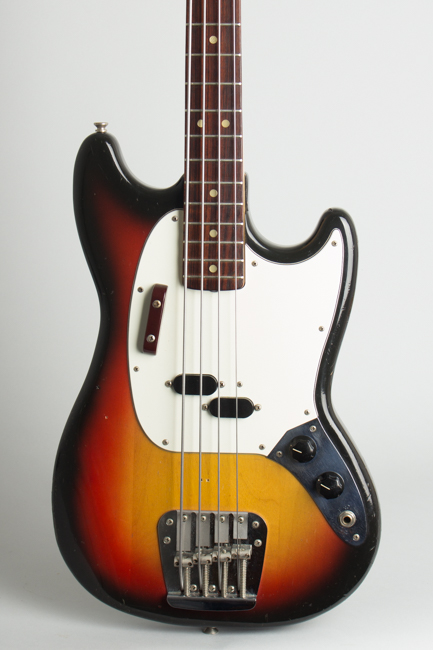 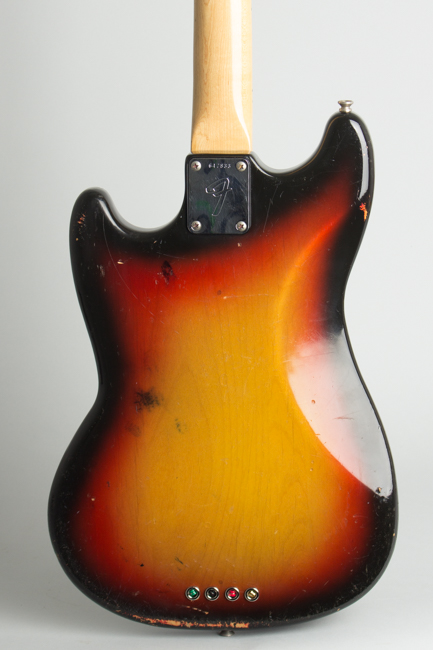 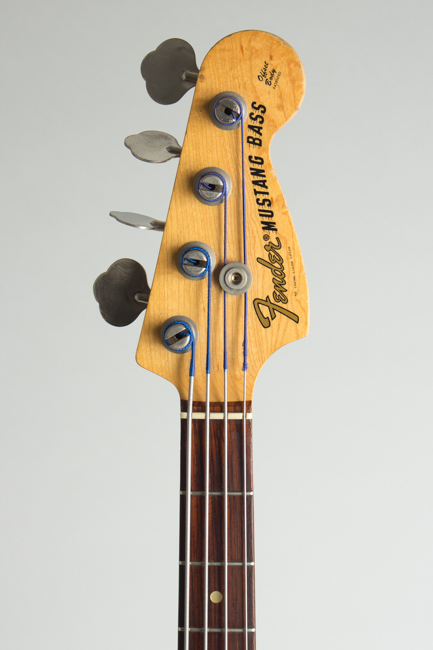 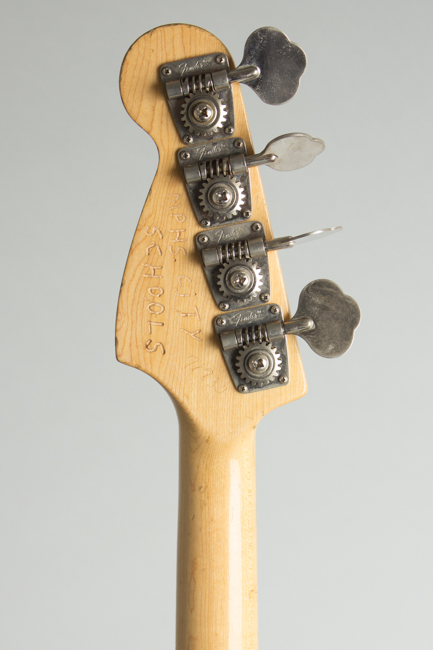 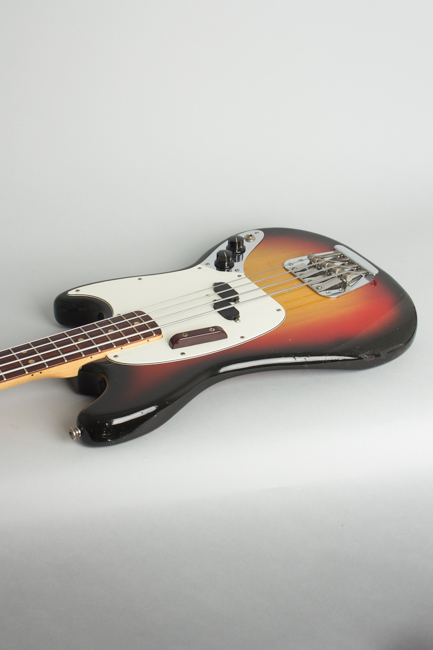 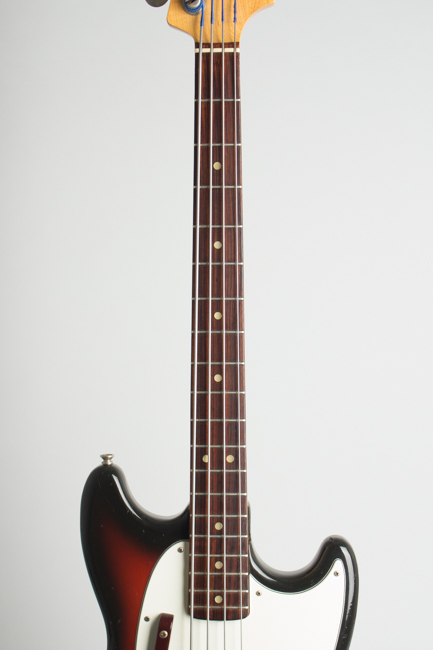 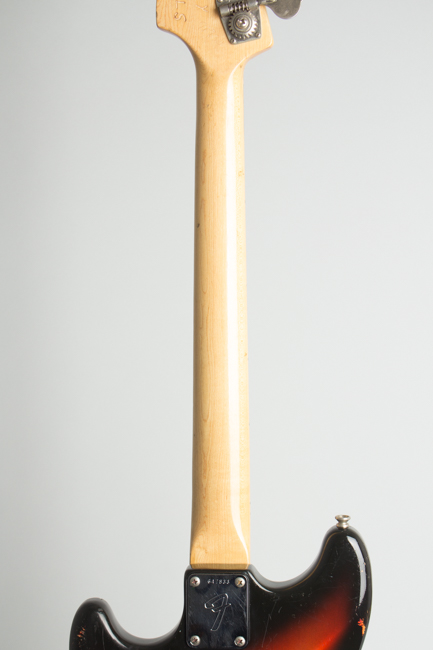 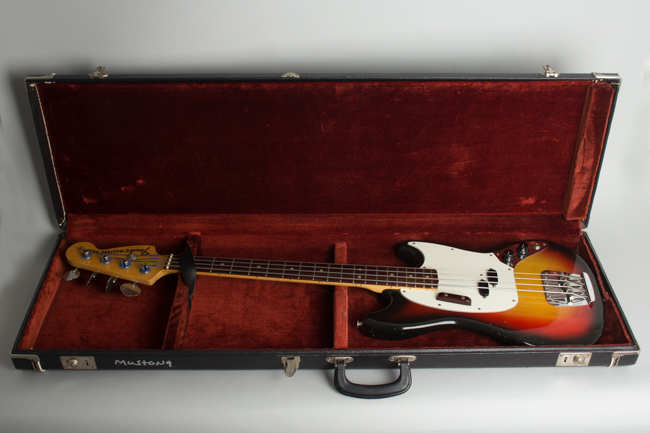 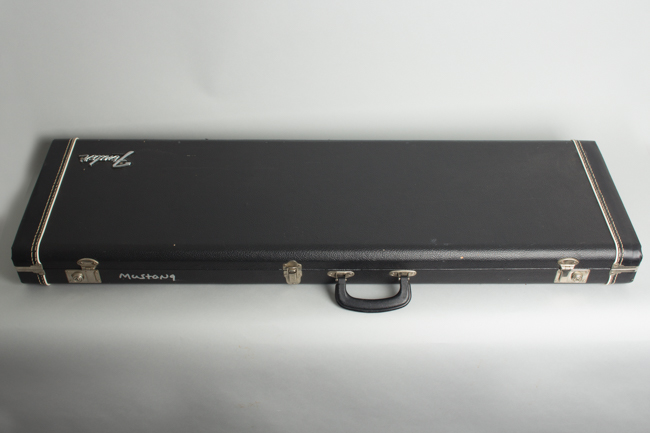 This 1970's Fender Mustang Bass shows some general wear, but still a great player and in nicely original condition. This bass was built a couple of years after the end of the run of the rather whimsical "Competition" version in 1972. It has a sunburst finish on the body, the newer white plastic pickguard with the thumb rest now mounted above the strings and a natural neck and headstock. The neck stamp is the rather inscrutable mid-1970's "red code" but suggests 1975, and the pots date to the 38th week of 1974. Aside from the heavier finish and the thumbrest position most features remain similar to later 1960s models.

The Mustang Bass was introduced in 1966, Leo Fender's last original design for the company that bore his name. Although originally intended for students, the instrument is so well-designed and laid out that many professional players have used it extensively including Bill Wyman and Tine Weymouth. Ideal for guitar players or bassists with smaller hands, the Mustang remains one of the best short-scale basses ever designed, well-balanced and comfortable with a very punchy and surprisingly fat sonic signature. This superb playing bass has survived well despite apparently spending time in a municipal school system, a situation few instruments escape unscathed!

The sunburst finish has very little fade and retains a deep strong color, with the typical 1970's more amber yellow tint to the center section. The tough '70's Fender finish shows the signs of less-than-careful handling numerous dings, chips, dents and divots, with a lot of scuffing to the back in particular. There are a few small marks in the top that appear to have been poked in with a Phillips screwdriver. There is a line of finish rubbed away on the bottom back edge where it looks like the bass was dragged along a rough floor at some point! There are also a couple of random ink stains on the back. All hardware is original except the string ferrules on the back are newer, and there is no foam on the mute bars.

The fairly small fret wire remains original with good height remaining; there is some round-wound string wear in the lower positions but not enough to hamper playability. This bass still plays very well with the typical punchy Mustang tone. The original black Tolex Hardshell case is included in much cleaner shape than one might expect; the bass was probably left out of it a lot during its educational career. "Mustang" has been added in silver script on the upper side edge. Very Good + Condition.
×