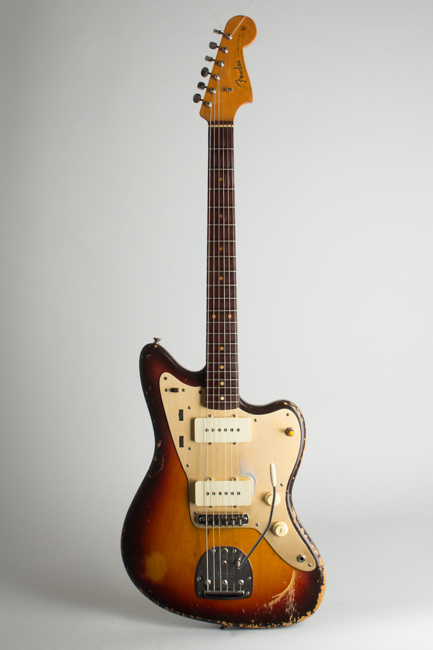 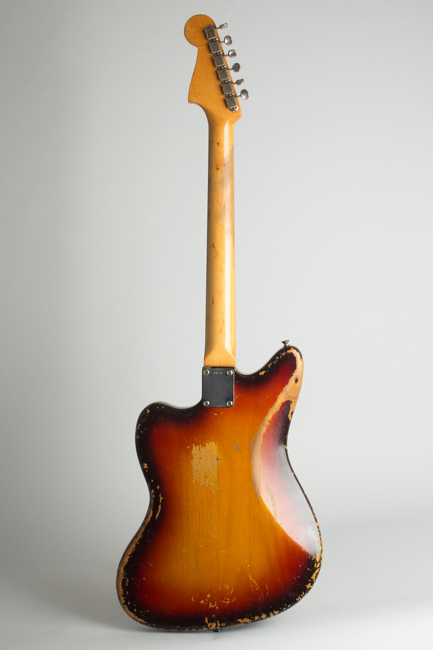 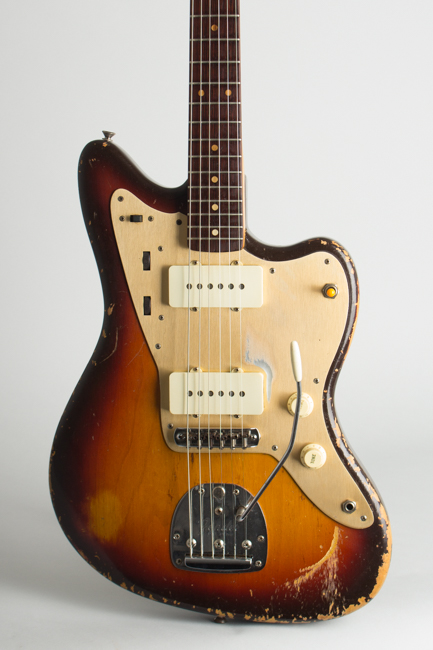 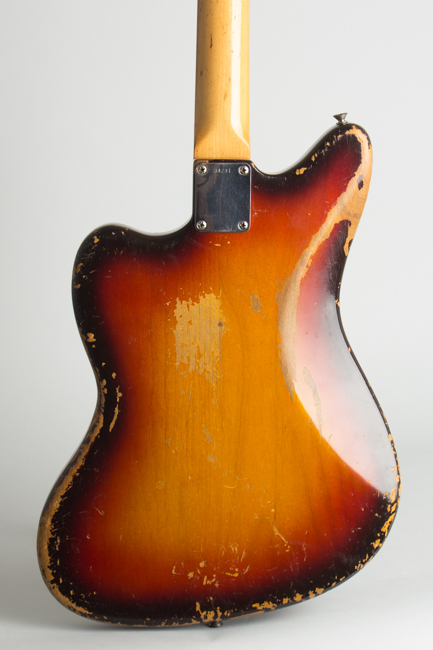 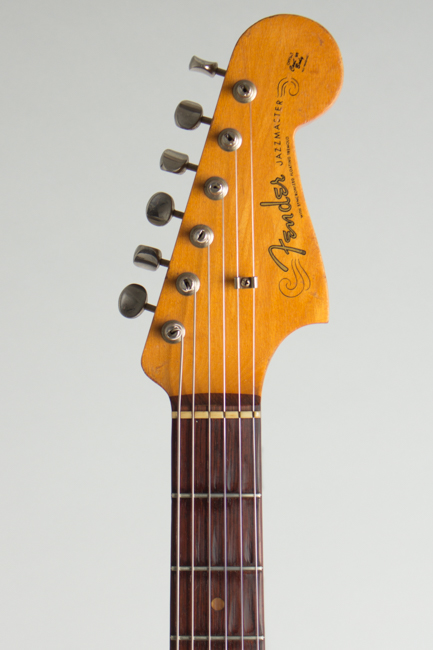 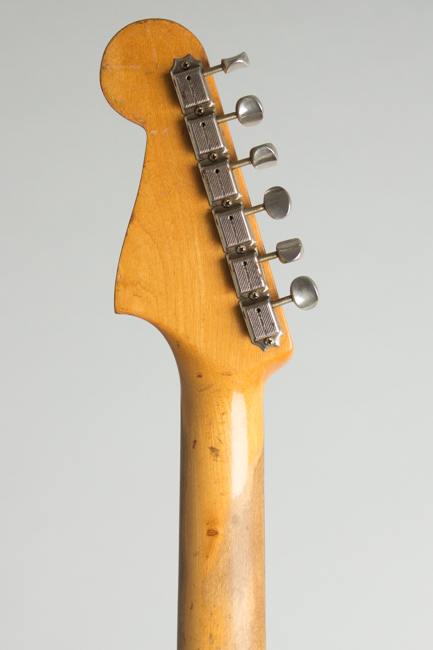 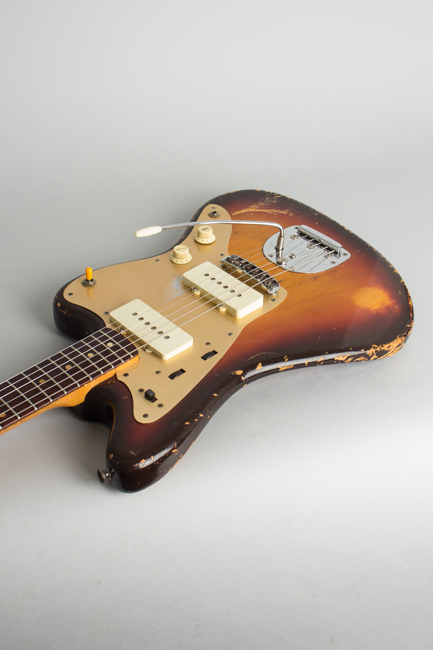 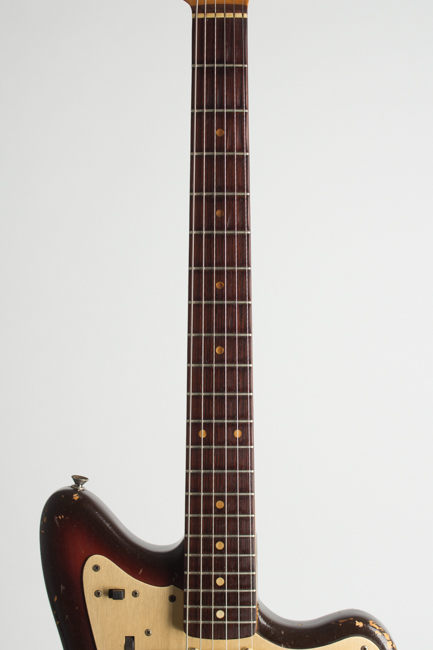 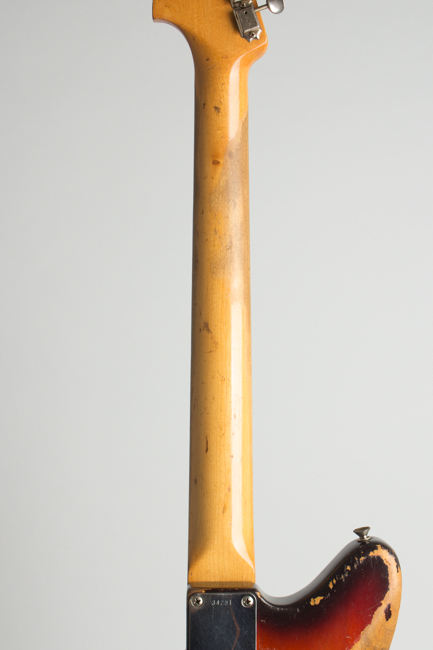 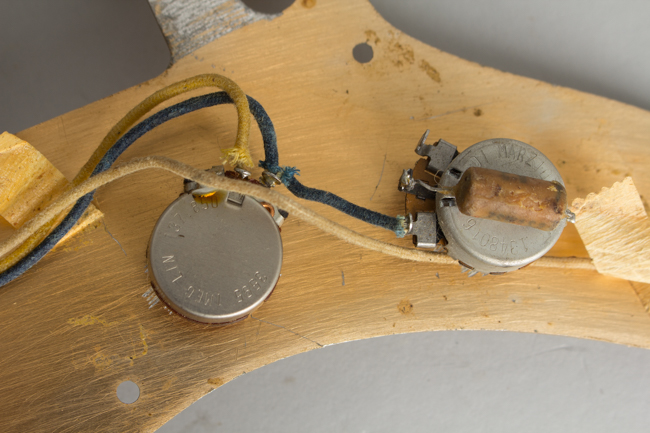 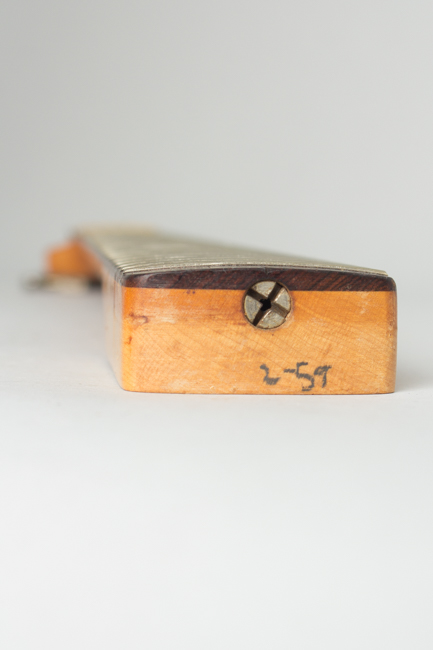 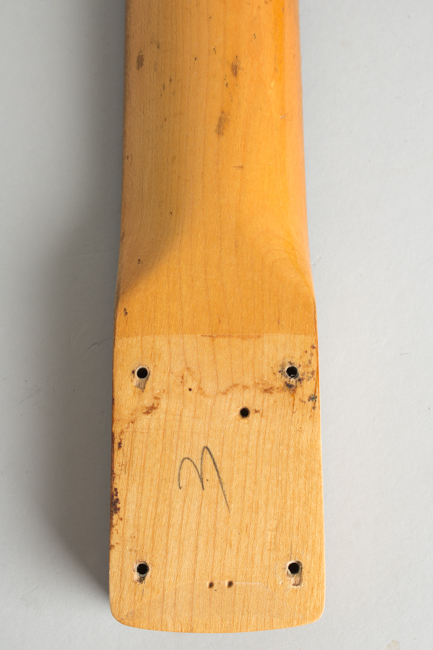 This is a played-in, heavily used early Jazzmaster that has a great vibe showing many signs of an eventful life. It is quite an early example of the model with a beautiful deep 3-color sunburst and the classic gold anodized pickguard used only up through the fall of 1959. The date code penciled on the heel is 2-59, indicating this guitar was built within the first few months of full production of the then-new Jazzmaster. The visible original pot code in this guitar is the 50th week of 1958. The electronic assembler's name (it looks like "Nell") is penciled directly to the underside of the pickguard. The neck profile is quite slim on this guitar, with the clay-dot slab rosewood fingerboard.

When this example was made, the Jazzmaster was a brand new model, Fender's much-promoted top of the line guitar. Novel features like the patented "offset" body, rhythm/lead circuit wiring, floating bridge and tremolo, and wider-coil pickups were all news to Fender users. These were all definite advances in solid body design, much imitated even if they failed to entice dedicated Gibson players to change over to Leo's products. Contrary to what one often finds written today the Jazzmaster was very popular in the early 1960s but faded away as playing styles changed to favor light strings and high volume later in the decade.

When this was their new prestige product, the Fullerton factory lavished a maximum of care and effort on Jazzmaster production. We find these first generation "offsets" to be nearly always exceptionally fine instruments. Over the last 25 years or so the Jazzmaster, once maligned, has risen to be one of the most widely played of vintage designs, and this is a very early example. Heavily used but still a splendid instrument, this remains an exceptional-sounding and great playing twang machine. This particular guitar has a serious "relic" vibe, a great feel and a lovely "ring" to it, even when not plugged in.

This guitar shows numerous signs of heavy use, but remains a true survivor and an excellent playing and sounding instrument. There quite a bit of finish checking and wear, most noticeable on the back of the body but generally distributed throughout. The back has lacquer rubbed and chipped away on the edges and the dressed away contour zone, and a belt buckle spot into the wood at the center. The body edges have numerous larger chips and dings, with the lower bottom corner heavily worn down to the wood. The face is somewhat cleaner but has chips, scratches and dings and an area of lacquer worn down to the undercoat in the upper top armwear zone. There is an odd semi-circular gouge into the face on the lower quarter, where it looks like perhaps something attached to the trem arm was swinging in repeated contact; it is otherwise inexplicable!

The anodized pickguard is in much cleaner condition showing only one deep spot of wear down through the gold surface. It appears someone played quite a bit with their pinky wrapped around the lead pickup cover, wearing into the metal over time. The finish on the neck is worn through on the edges and in the lower positions. This guitar has a small knot in the back of the maple neck that is unusual on a Fender, especially a Jazzmaster, but there it is! The headstock finish and decal are relatively well preserved, the original Kluson Deluxe tuners relatively clean.

All external hardware is original, even the often replaced trem arm. The bridge has some moderate corrosion to the tops of the saddles; the adjusting screws are relatively clean and may have been replaced long ago. There are some lesser changed components internally to the wiring rig. The pickups and cloth wire rig remain original, including all of the upper rhythm circuit. The lower tone pot is later (with the original cap) while the volume pot remains original dated 1958. The lever switch (and its tip) and the jack appear to be changed as well, replaced with the correct type but simply of later (1980's?) manufacture. The wiring is the original Fender cloth wire, and most of the original masking tape securing it remains intact. It is likely the replaced electronic components simply wore out, and were changed before "Preservation" became a vintage guitar byword.

The fingerboard has been refretted with wire just slightly taller than the original, but not out of character for the guitar. the bone nut remains original with a nicely darkened patina. This is a very nicely-done refret job and the instrument plays extremely well. This guitar has definitely seen many stages over the past 60 years, but sounds fantastic; bright, clear and biting with a tone unique to these first generation Jazzmasters. Somebody (or several somebodies) loved and played this guitar over several generations, and it really shows. Overall Very Good + Condition.
×