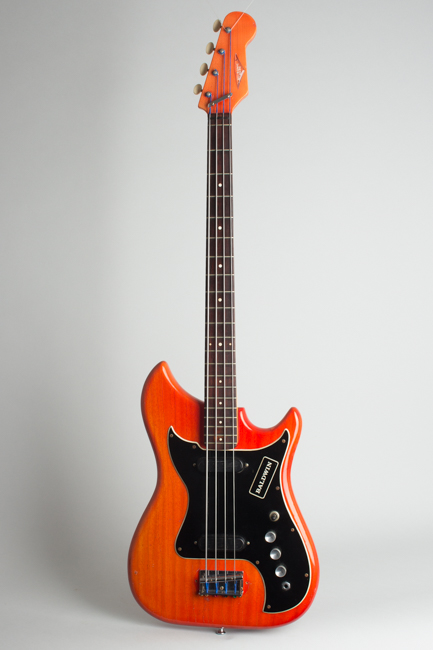 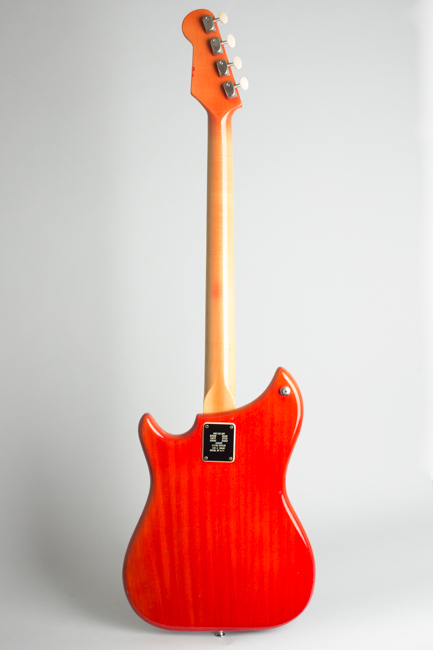 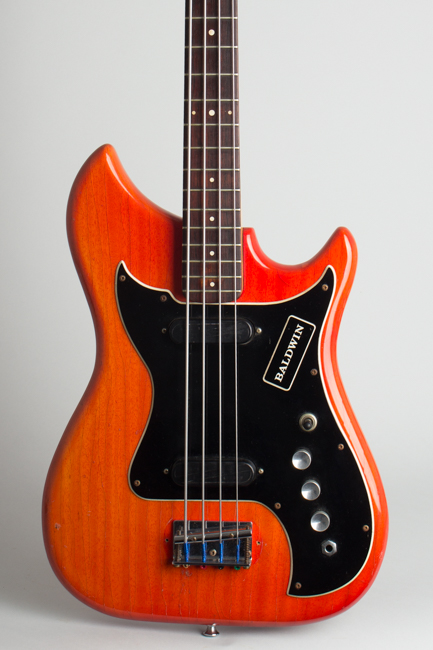 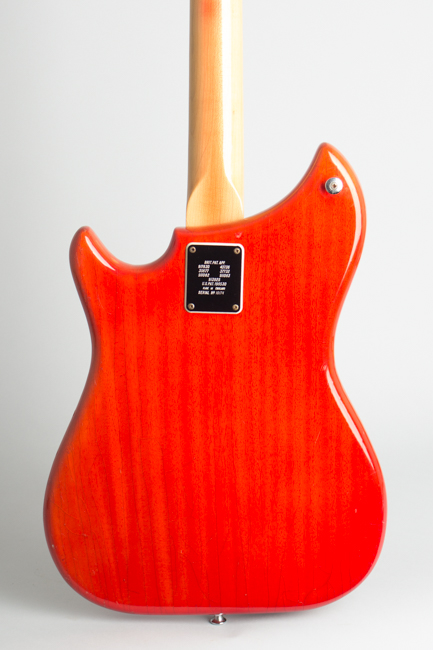 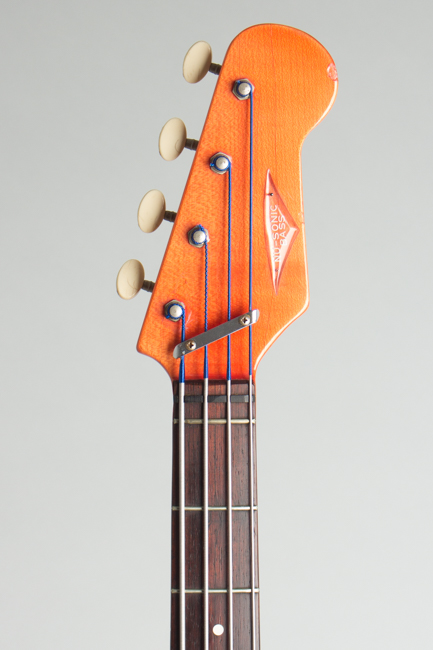 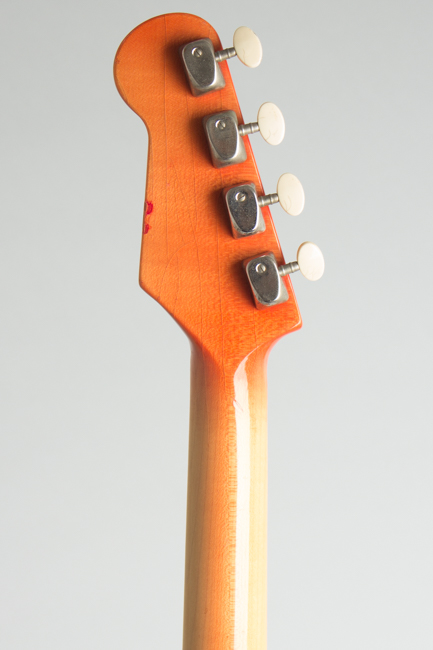 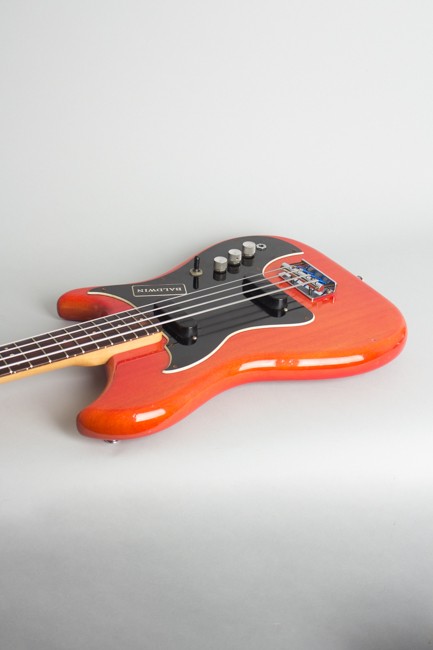 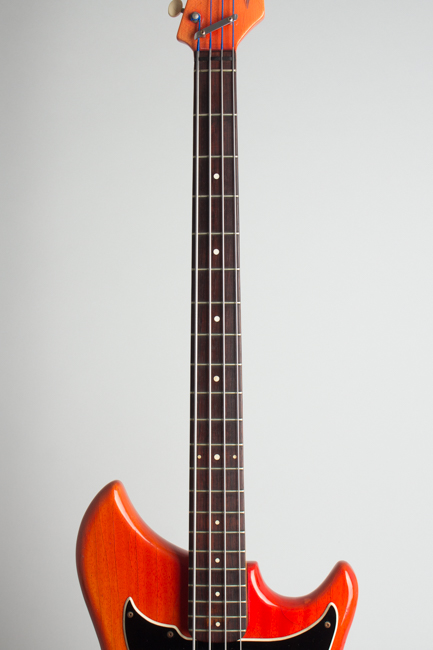 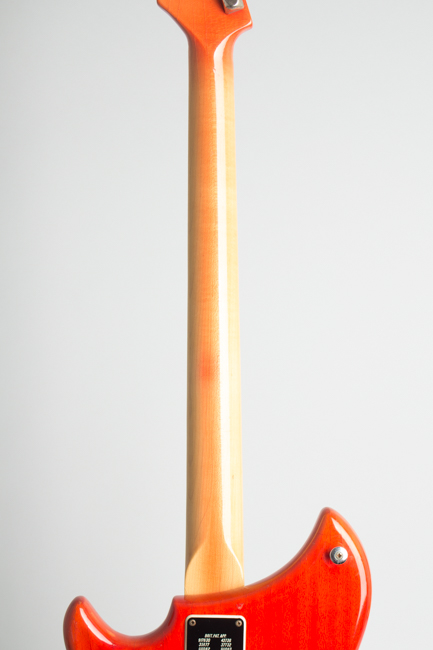 This is one of the lightest, handiest bass guitars we have ever had, with a much bigger sound than its small size would suggest. The Nu-Sonic was Burns of London's advanced budget model introduced in mid-1964 to replace the original 1960 Sonic series. The Nu-Sonic was offered in both bass and guitar versions in cherry or black at around half the price of the company's flashy Bison or Marvin guitar. They were roughly the equivalent of Fender's Mustangs and were aimed at a similar market.

The Nu-Sonics were one of the first instruments discontinued by Baldwin after they bought the Burns company in September 1965. They disappeared from the catalog by the fall of '66 so the total production run for all versions was only about two years. This bass has an internal inspection sticker dated to February 1965, so the components pre-date the Baldwin takeover by some months. The pickguard logo is the "cut-in" Baldwin style used for already completed instruments after the takeover. Burns-labeled examples of the bass are quite rare, and Baldwin examples like this one only slightly less so. Nearly all are in the cherry finish like this one.

The fittings are simple with two single-coil Nu-Sonic Pickups, 3-way switch, individual volumes and master tone. The bridge is a solid bar adjustable for height and overall intonation, and the tuners are Van Gent guitar machines with plastic buttons. The bolt-on 30" scale neck is has a round-backed profile and is very comfortable for guitarists as well as bass players. This is an extremely light and handy bass with a surprisingly powerful and versatile tone. There are photographs of George Harrison playing a cherry Nu-Sonic bass at the 1966 Abbey Road sessions for "Paperback Writer", so the red Nu-Sonic Bass is considered a "borderline" Beatle instrument! The Nu-Sonic bass is one of our favorite short-scale bass guitars and always a delight to play.

This bass shows some general wear but remains a very good player. The Poly finish has faded to a soft orange from the original cherty and shows a decent amount of the typical Baldwin finish checking, but is not cracking or flaking off. There are dings and dents into the wood in various places on the face and back, plus a chip to the lower back edge of the headstock that shows some old amateur touch up. All hardware is original and complete except the bridge cover is missing as it usually is. The neck and frets are in excellent shape and this instrument plays extremely well, with an amazingly deep and punchy sound for such a light (under 6LB) and handy instrument. Overall Excellent Condition.
×