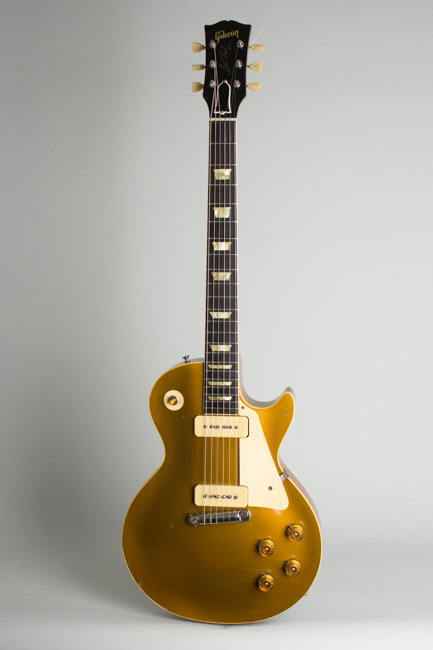 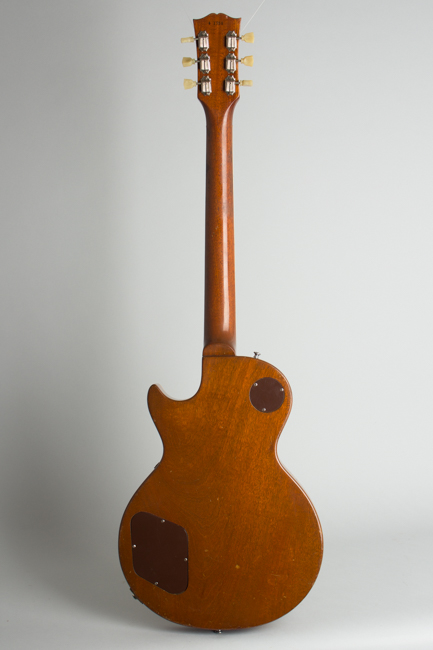 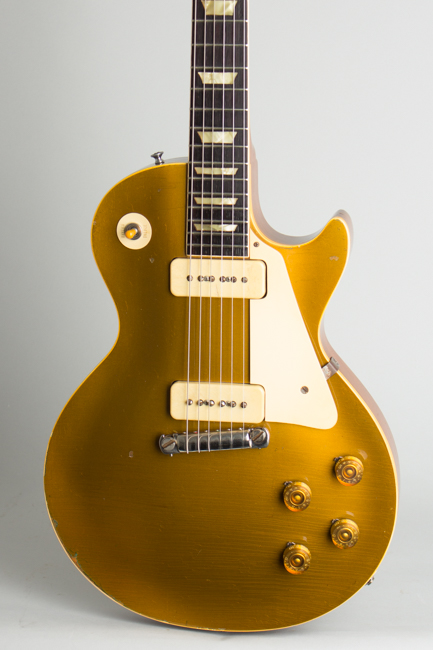 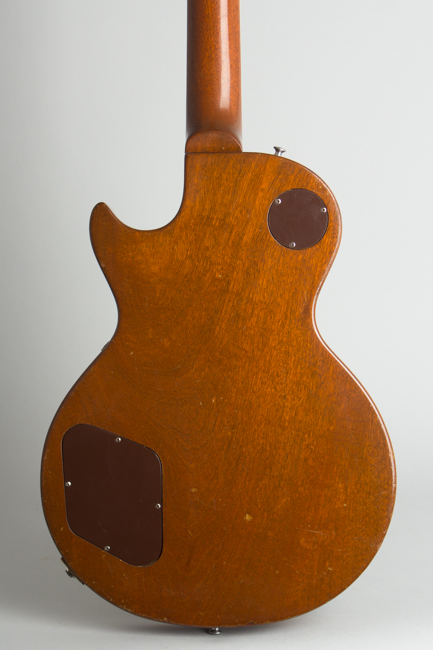 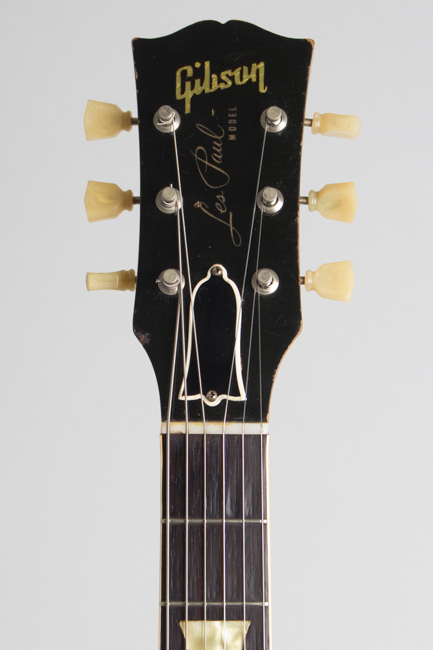 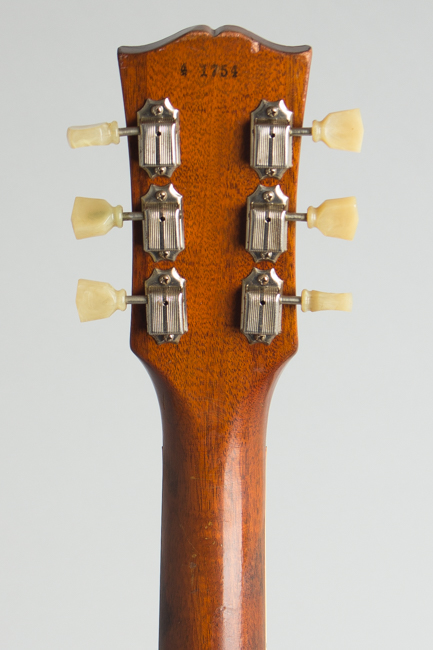 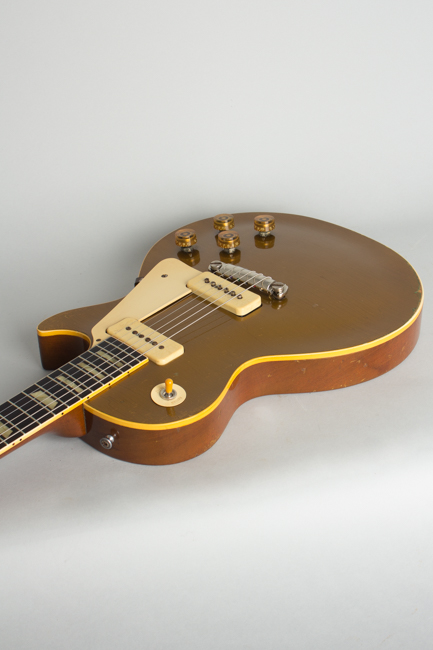 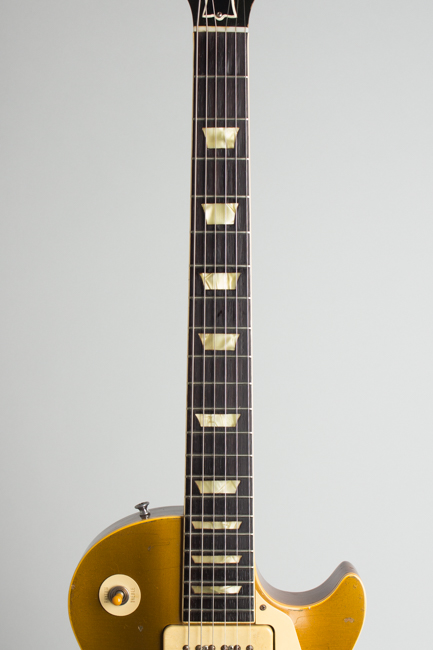 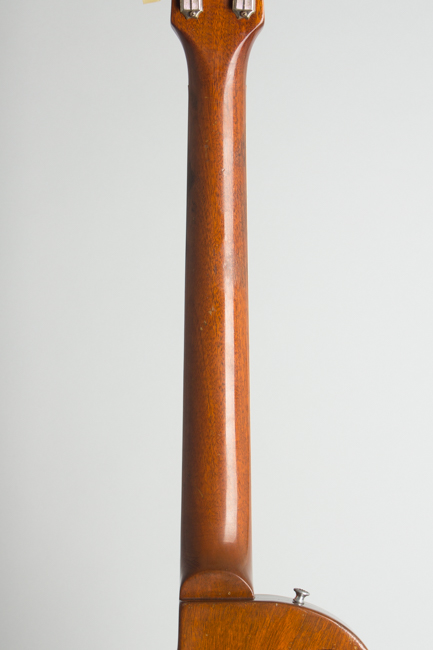 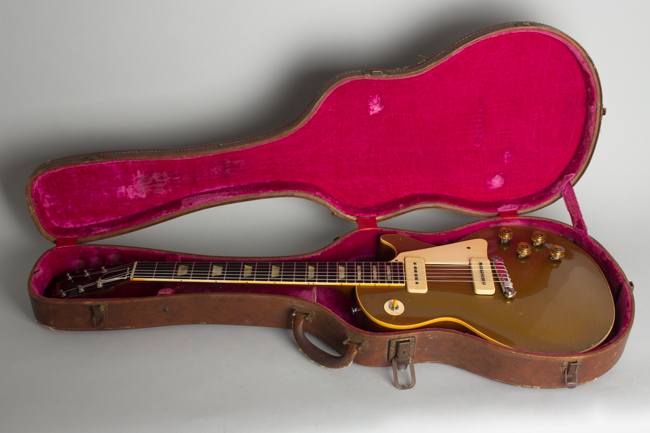 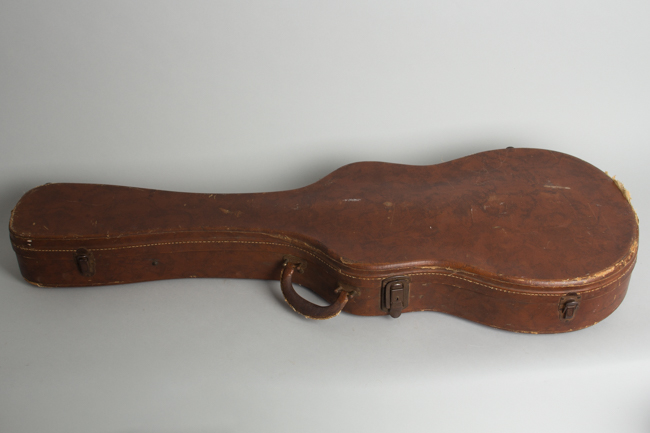 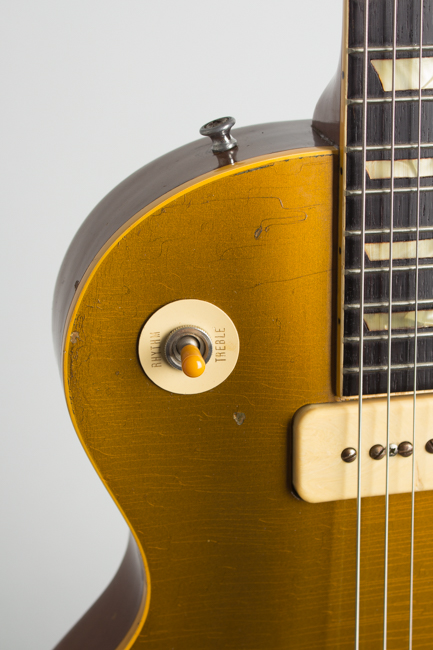 This is a super example of one of Gibson's most important guitars-the original gold-topped Les Paul Model. This one dates to early/mid 1954 and is the second major variation of this all-time classic solid-body, with the much more player-friendly stop tailpiece replacing the earlier "Les Paul" trapeze the model was introduced with. Les Paul himself was very unhappy with the initial models, constructed so the strings wrapped UNDER the bar of the trapeze unit instead of over it as intended. Gibson president Ted McCarty personally designed the stud-mounted bridge/tailpiece unit used here that both corrected that problem and eliminated the trapeze altogether.

Other features of this 1954 model include the bound rosewood fingerboard with pearloid trapezoid inlays, twin P-90 pickups under shallow-depth cream plastic covers with center-mount screws and Kluson Deluxe tuners with keystone-shaped buttons. In an idiosyncratic touch, the pearl Gibson logo is set lower down on the headstock than later '50s models. Another oddity on this guitar is the plastic used for the pickup covers which has a slight swirl pattern in the cream color. This is specific to guitars from this 1953-4 period, and sometimes also seen on early ES-295 archtops.

From the first full year of Gibson's improved "stoptail" Les Paul, this is a MUCH more player-friendly guitar than the 1952 or '53 models with the strings mounted under the trapeze bar. This one has a particularly good neck angle with plenty of room for bridge adjustment, which is not always the case with these. This is a fine example of these revolutionary guitars which arguably established the Les Paul as the "other" prime contender in the new solidbody market and Fender's greatest competition. There were just over 1,500 of these instruments sold in 1954, and most of them have seen a lot more wear than this one.

The first solid-bodies with the class of a Gibson, these guitars convinced many players to lay down their electrified arch-tops and enter the new world of higher volume. Later developments of the Les Paul line included the upscale Custom, down-market Special and Junior, and reworked Standard in gold and sunburst, but this is the guitar that started it all. To this day many players feel these pre-Tune-O-Matic, P-90 Les Pauls are as flat-out bad-ass a solidbody guitar as has ever been made.

This 66 year old Les Paul remains in all original condition, with some typical wear but no repairs or alterations. The finish is untouched with no overspray anywhere and shows checking, dings, dents and scrapes overall but no heavily worn areas. There are a couple of dings through the top finish but only minor flaking and greening across the top edge of the gold lacquer, where heavier loss often occurs. The back of the neck has minor dings and dents and some finish worn off the edges in the lower positions.

The neck pickup cover has some pick wear in the area below the high E string, and a deep scratch in the plastic off the back edge. The original cream plastic jackplate is still mounted but has a cracked corner and some extra washers added around the jack; there is a reproduction included that can be easily substituted if desired. Internally all wiring is original and unaltered.

The original narrow frets show some moderate wear and there is some light divoting to the rosewood fingerboard, the guitar is still quite playable with a really superb sound. When the all-time classic solidbodies are discussed, these gold top 1953-6 Les Pauls are always in the mix. This one is housed in the original period Lifton brown case that has a slightly longer upper bout area and squarer headstock zone typical of this 1953-4 period. Overall Excellent - Condition.
×