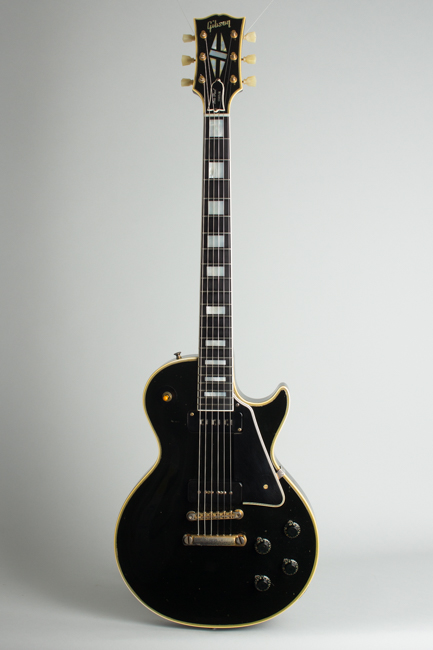 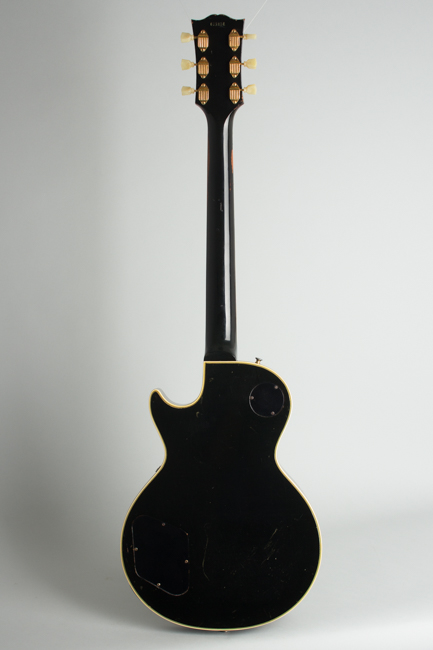 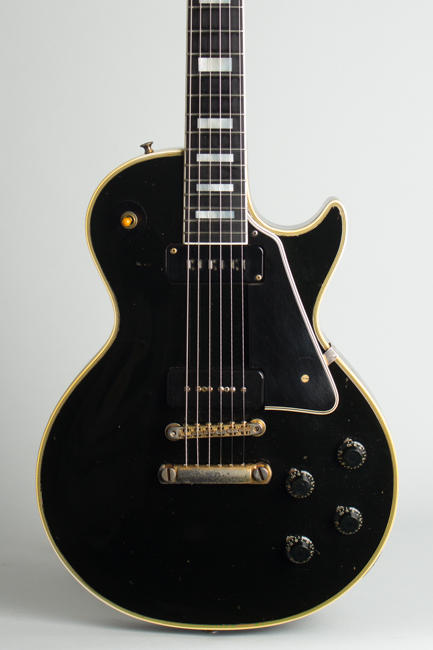 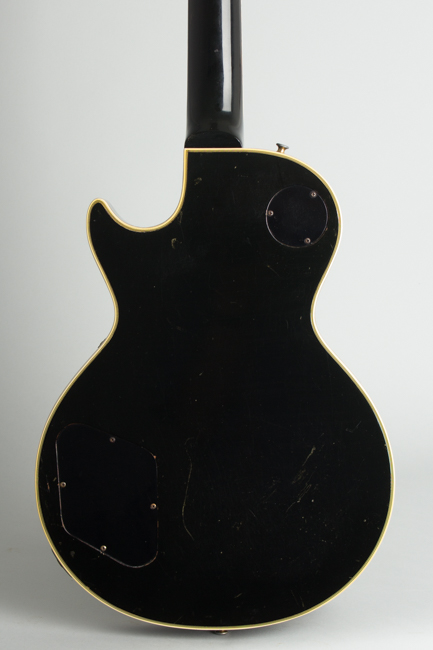 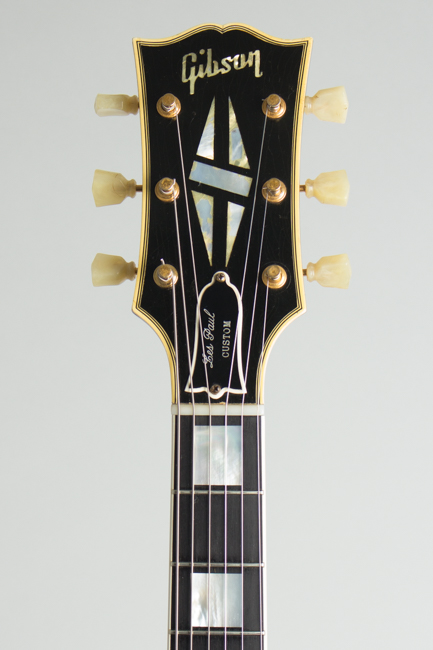 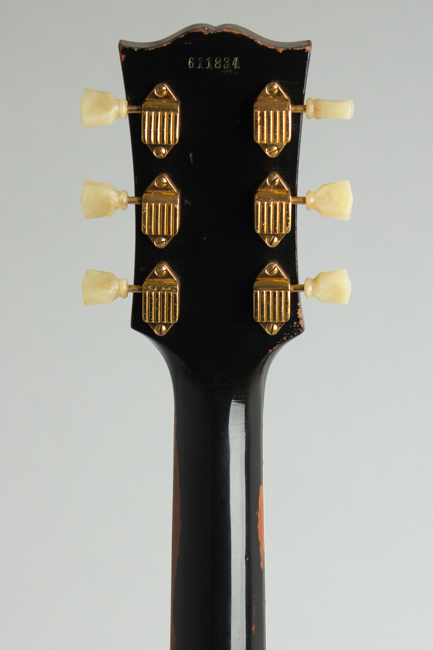 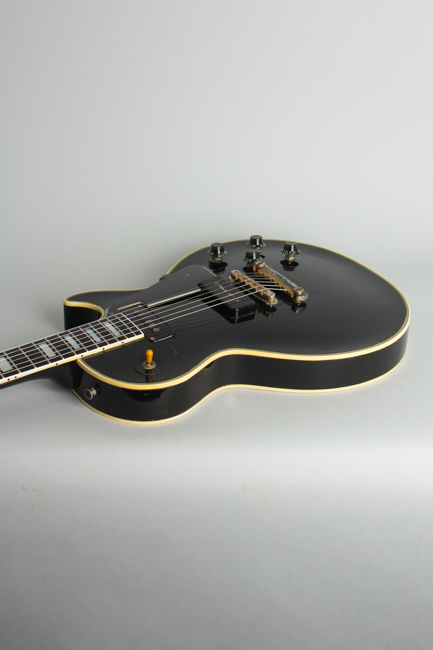 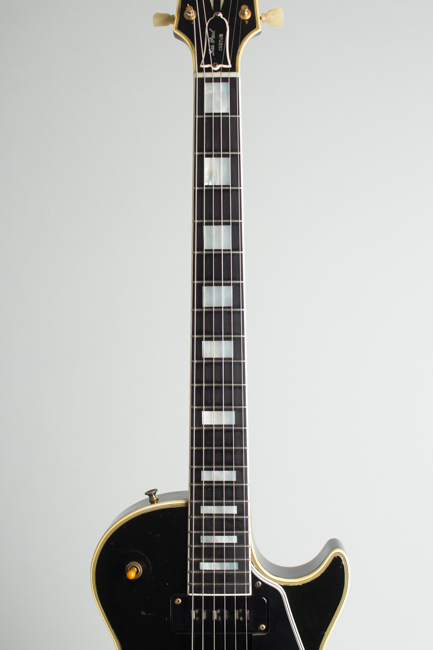 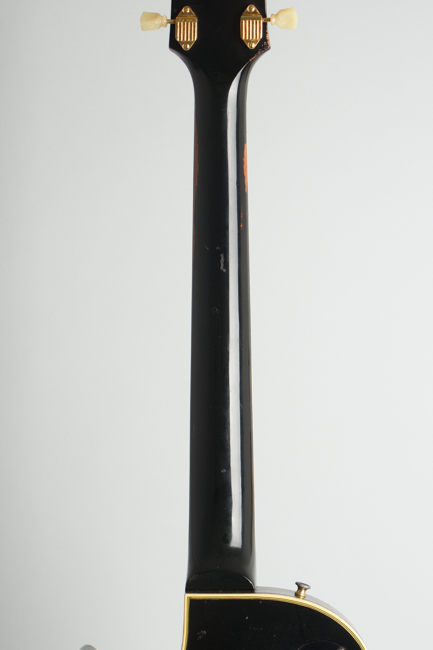 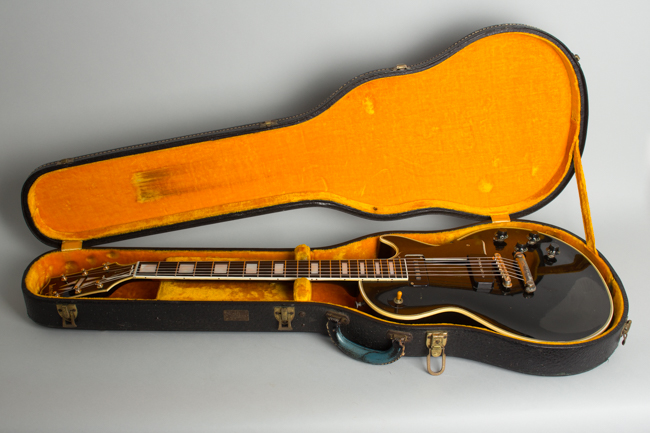 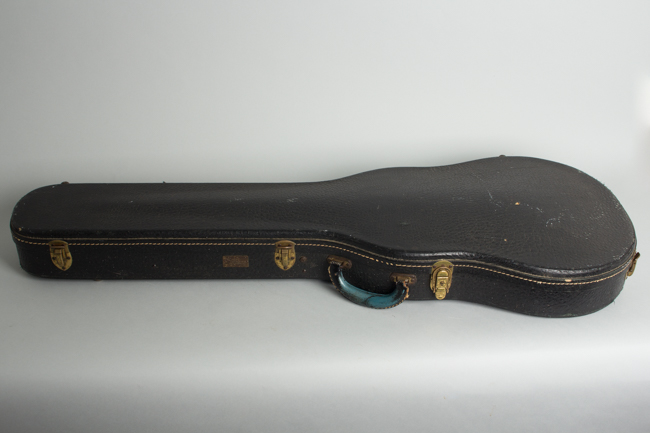 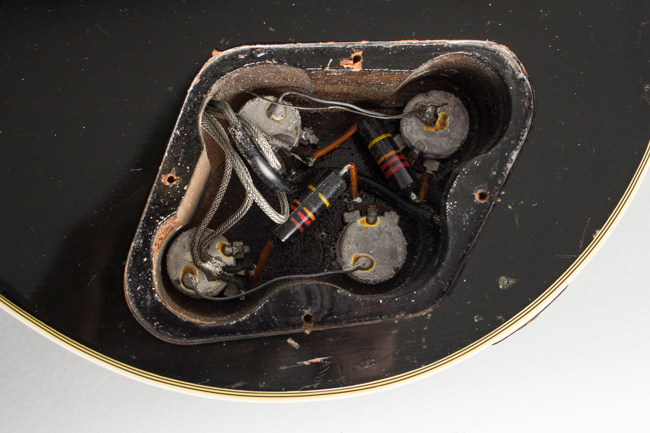 The Les Paul Custom was Gibson's top-of-the-line solid-body throughout the 1950s, a shining "Black Beauty" with gold-plated hardware and deluxe appointments drawn from the company's flagship archtops. This model was introduced in 1954, with direct input from Les Paul himself as to what he wanted his personal instruments to be. Gibson delivered, and Les and Mary Ford performed for the rest of the 1950s on modified Customs.

The Gleaming black finish was Les' idea -- he called it a "tuxedo effect" and believed it made the player's hands stand out to the audience especially on TV. The guitar has other features unique to the Custom model; the carved-top solid body is made entirely of mahogany. Unlike the Standard model, it has no maple cap. This was not one of Les' specifications, and while he later claimed Gibson had "screwed it up," this does give the Custom a slightly warmer natural sound. The fretboard is ebony with pearl block inlay, and the elaborate split diamond motif on the headstock is shared with the Super 400, Gibson's most expensive guitar. There is multiple binding in the body and headstock and all hardware is gold-plated, including the high-end Kluson "waffleback" tuners.

The Custom was the first Gibson to feature the then-new fully adjustable Tune-O-Matic bridge, mated to the stud-mounted stop tailpiece unit that had previously served as the bridge on the Standard and Junior models. It was also the only solid-body to carry the new "Alnico V" staple-magnet pickup newly designed for the company's high-end instruments, again likely with input from Les himself. This unit is essentially Gibson's take on a DeArmond DynaSonic, which is what Les had in his personal Standard in 1953-4. Combined with the more typical P-90 in the bridge position, this crisp and powerful pickup gives the Custom a wide tonal range unique among Gibson solid-bodies.

Another feature specific to the Les Paul Custom were very thin, low, and flat frets, which were again Les' personal preference. Gibson called it the "Fretless Wonder" and while it did appeal to some players in the 1950s, since then most rock players have found this setup not at all conducive to their style. Like many this Custom has been neatly refretted with slightly larger wire which results in a noticeable improvement in playability for most guitarists.

In 1957 the Les Paul Custom was altered to feature three of the new Humbucking pickups, and the unique Alnico V/P-90 pickup mix was discontinued. Somewhere around 1,000 of these first generation Customs were sold between late 1954 and mid-1957. Several well-known players made extensive use of them at the time including R&B/Jazz specialist Mickey Baker and Bill Haley's Comets' guitarist Frannie Beecher. This is still one of the classiest and sharpest looking solid-bodies ever designed, and a unique sounding one as well.

This is a nicely original guitar, with a vintage small wire refret as noted but no other alterations. It remains relatively clean overall with typical light wear. The finish has a number of small chips and dings, including several feelable dinks to the back of the neck. There is more scuffing to the back of the body than the face, and the only really worn away areas of finish are on the sides of the neck below the fifth fret. The top shows light checking, while the headstock face has heavier check lines and much of the clear lacquer over the split diamond inlay has flaked off.

There is typical wear to the gold plating overall, most notably on the ends of the bridge and most heavily on the stop tailpiece where much of it is worn away. All electronics, wiring, and hardware are original with the exception of the bridge mounting posts; the originals are included in the case but appear rusted enough that someone saw fit to replace them. The only other parts oddity is the screw in the center of the pickguard securing it to the bracket. It is the correct gold-plated vintage piece but is an earlier slot head screw instead of the expected Phillips type. This may have been replaced or it may have simply been the day the designated box was empty and the assembler used a leftover older part!

On the whole is one of the nicer '50s Customs we have seen, used but not abused with no notable repair or alteration. The neck angle is sharper than many, which results in a brighter, more ringing tone even acoustically. The bridge pickup is raised up close to the strings on two small and very neatly made mahogany shims that appear to be factory and has a very powerful sound. This is a lovely example of Gibson's fanciest 1950s solid-body complete in the clean original yellow-lined black pebbled case. Excellent - Condition.
×