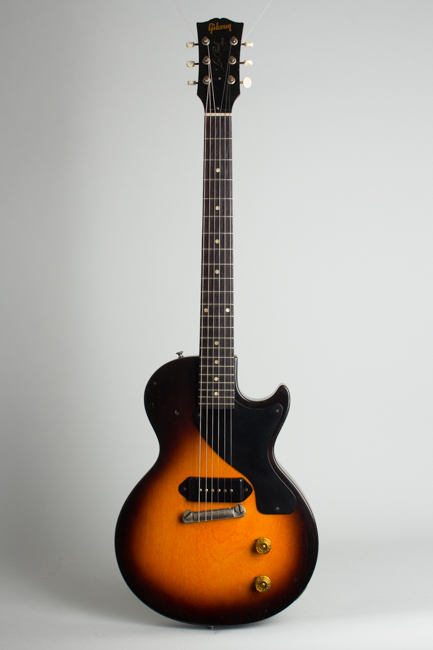 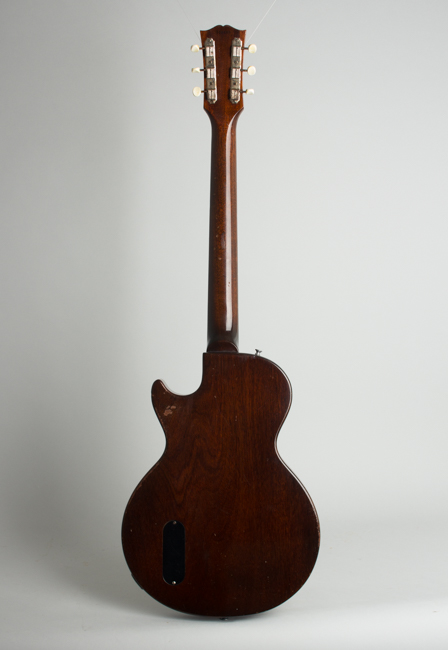 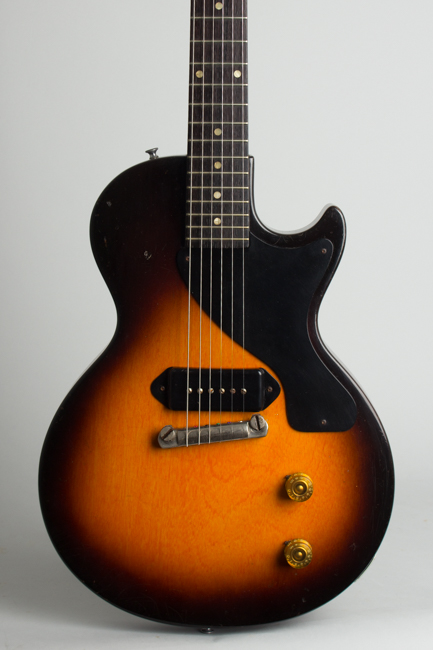 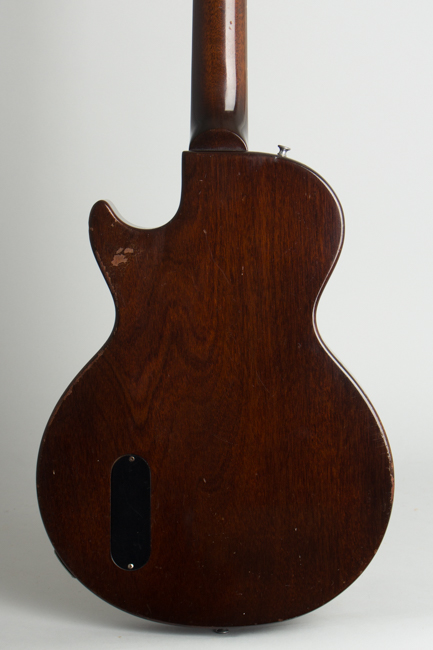 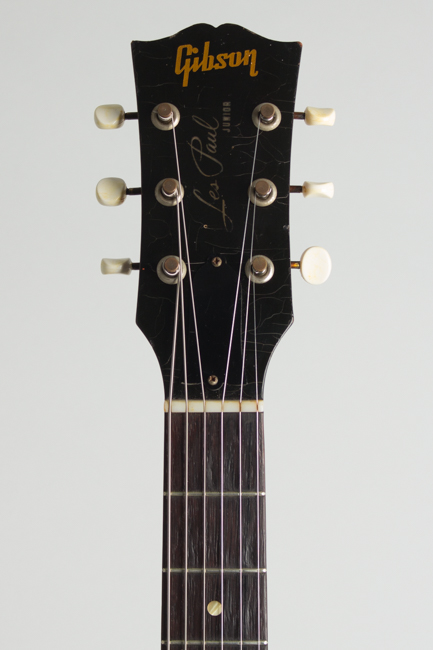 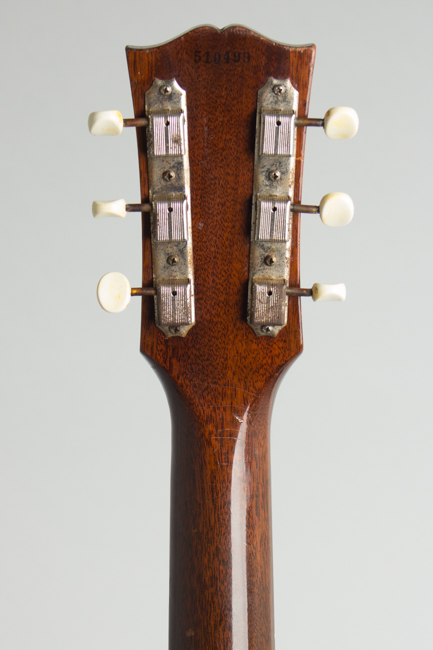 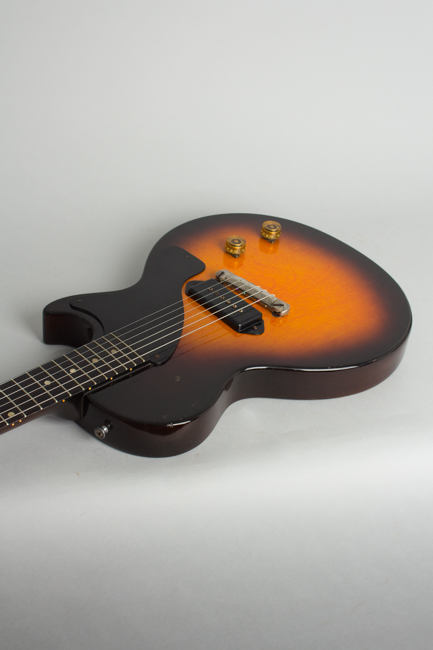 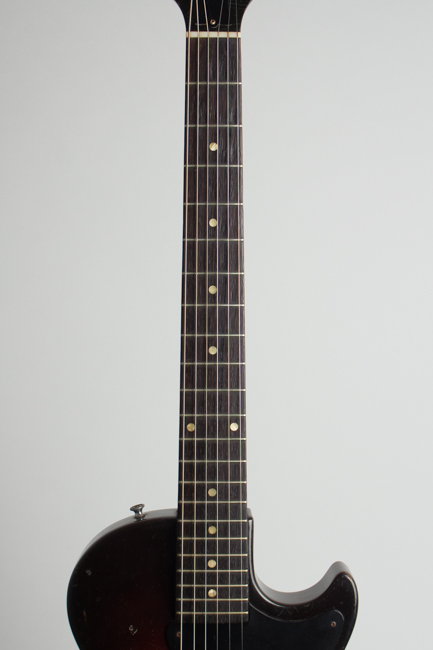 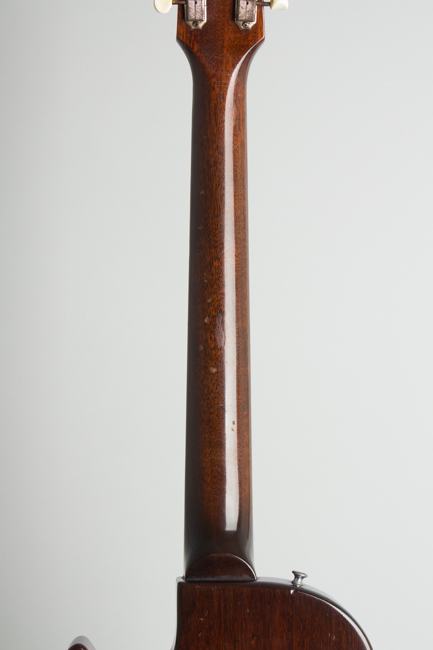 Just Arrived!
This item has been sold.
Item # 9315
Prices subject to change without notice.
Gibson Les Paul Junior Model Solid Body Electric Guitar (1955), made in Kalamazoo, Michigan, serial # 510499, sunburst top, dark back and sides finish, mahogany body and neck, rosewood fingerboard, black hard shell case.
This is a great-sounding, all original second-year Les Paul Junior; a bit worn in but a nice playing example of this classic '50s Gibson solid body with a fairly lightweight body and one very lively P-90 pickup. The top sports a vibrant sunburst finish with a much more "orangey" pigment than many of these and showing hardly any fade. The mahogany neck has a lovely feel, a bit shallower with a less chunky profile than some '50s Juniors.

As the name implies, the Les Paul Junior was the most basic of Gibson's 1950s signature line, with only a single P-90 pickup at the bridge and simple bar bridge/tailpiece. This was an exercise in superbly effective minimalist design and the Junior's very lack of complexity worked perfectly then and now. Launched in mid-1954, the model was a success right from the start. Over 2800 sold in 1955, more than tripling the number of Les Paul Standards shipped and proving to Gibson's management that solid body electric guitars were there to stay.

While designed as a student guitar, the Junior has become justly renowned as one of the crunchiest and most powerful of all straight rock guitars, with fantastic natural overdrive capabilities when paired with the right amp. The combination of the solid, thick mahogany body and neck with the single dog-ear mounted P-90 and bar bridge maximizes tonal response. Many prefer this model to all others for both crunch rhythm and searing lead. From Leslie West to Mick Ralphs, and Johnny Thunders to Paul Westerberg to Billie Joe Armstrong, Gibson's original 1950s Les Paul Junior has proven itself over and over to be the most basic of rock machines, as simple and effective as they come.

This 65 year old Junior remains in nicely original condition, with some typical wear but no repairs or alterations. The buttons on the Kluson Deluxe tuners are new, as the originals were shrunken beyond salvage but all else remains original. The original finish is unaltered with no overspray and shows typical checking on the top, with dings, dents and scrapes overall but no major loss. There are a couple of deeper dings through the top finish and a spot of heavier belt buckle wear through the lacquer on the back, in a lower than normal position around the cutaway horn. There is a fairly deep dent on the treble side of the body.

The back of the neck has a number of small dings and dents, a feelable scrape behind the 6-7th fret area and some finish worn off the treble edge in the lower positions. The frets and fingerboard show some wear in the lower positions but nothing that affects playability. As is typical with '54-55 Stop tailpiece Gibsons the mounting studs are leaning forward noticeably; the next year the bushings and studs were made longer to sit deeper into the body. This is not affecting playability on this guitar as there is still enough leeway to enable a very low action.

The pickup on this Junior is right up under the strings resulting in a massive singing sound when the amp is cranked. Overall this remains a well-played but unaltered Junior, a nice giggable example of Gibson's greatest "Kid's guitar". And this one came to us from Louisiana, so it has definitely had some funky vibe played into it! Excellent - Condition.
×