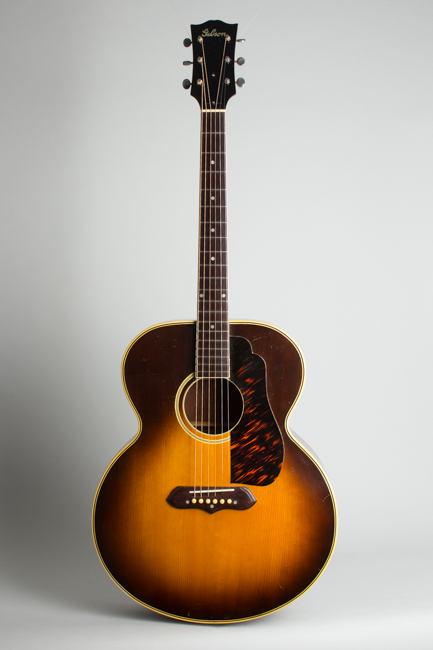 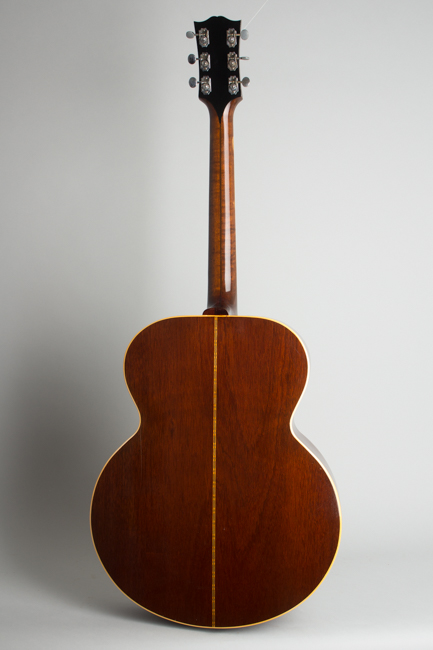 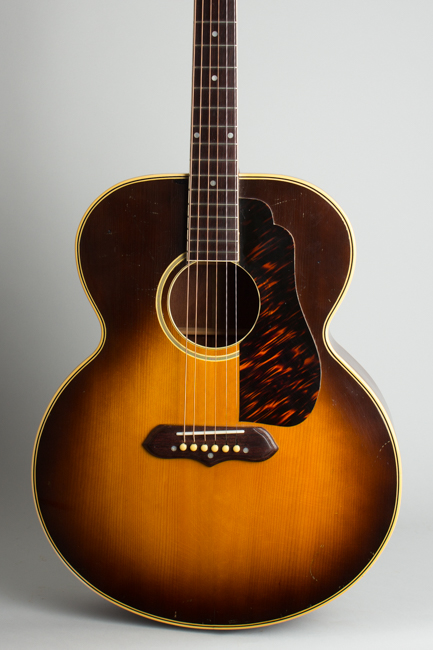 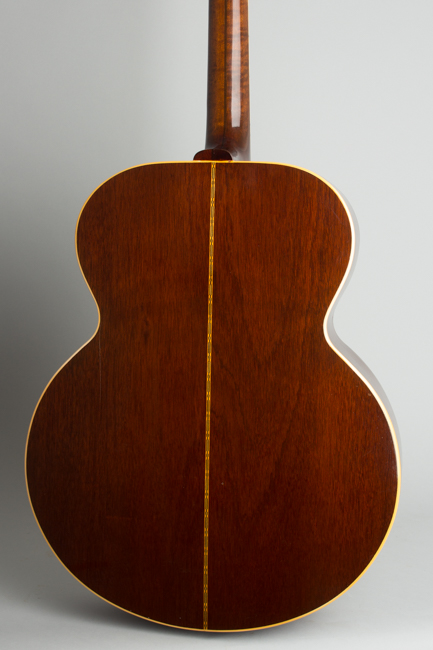 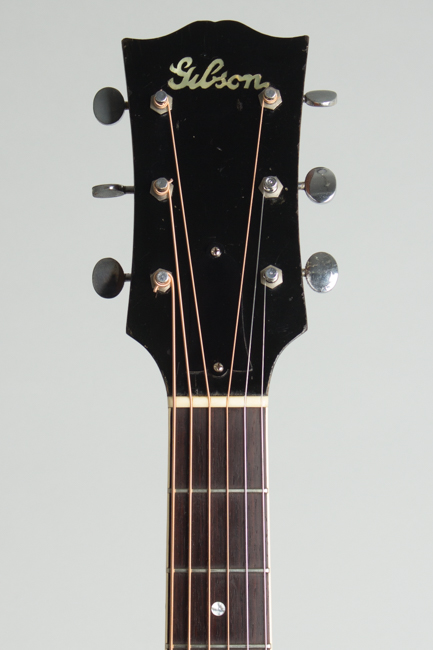 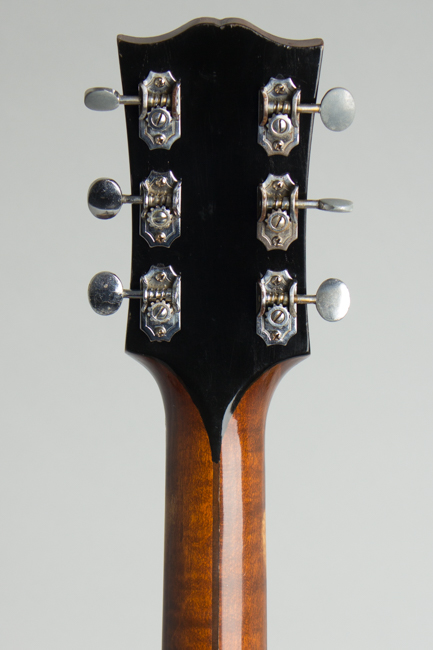 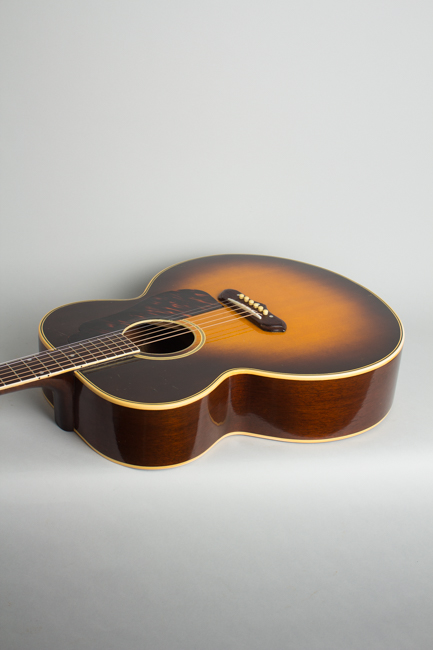 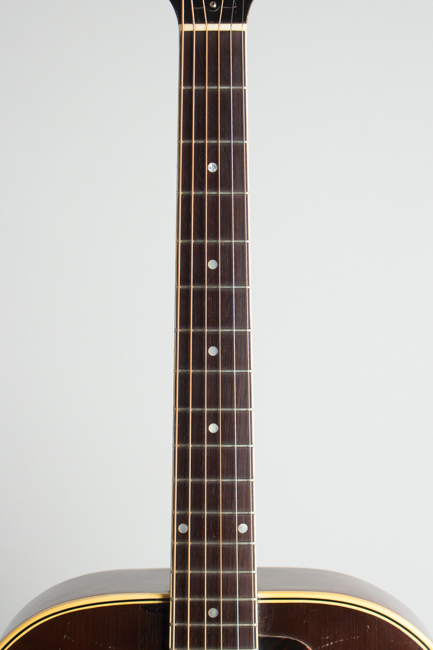 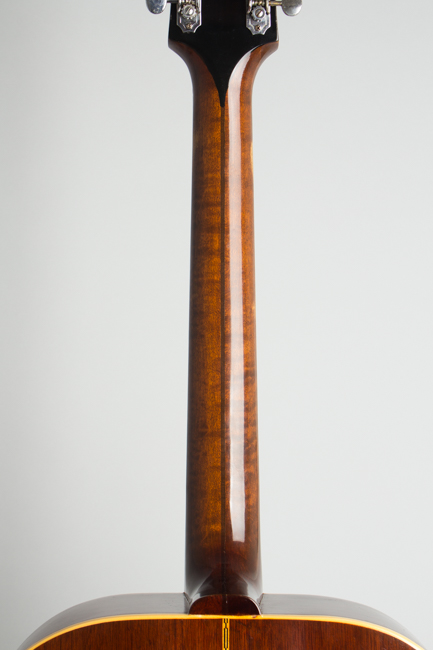 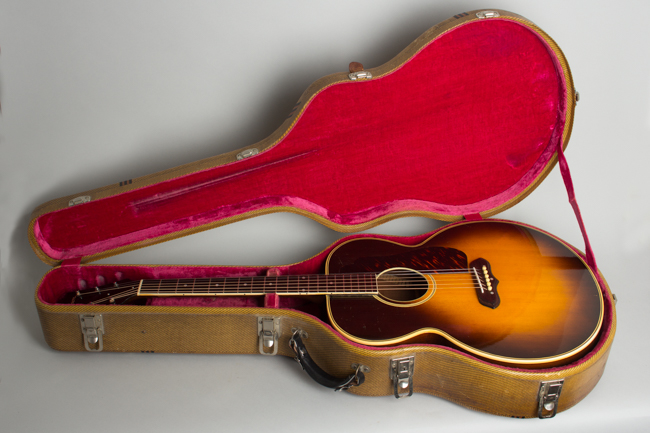 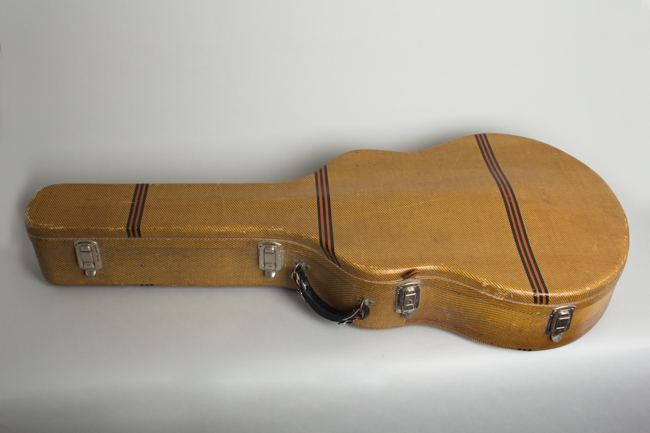 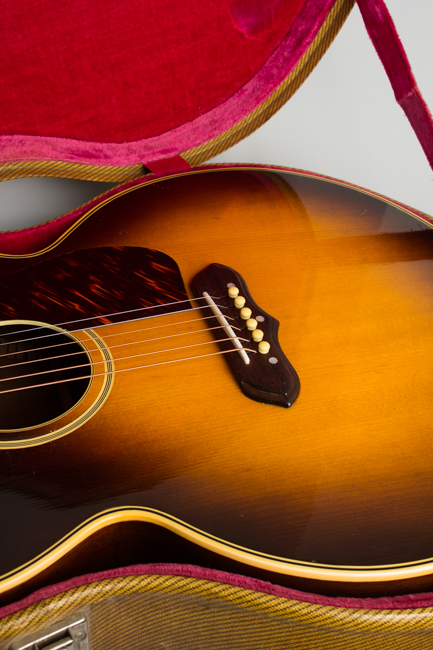 This imposing narrow-waisted Jumbo guitar is one of Gibson's more delightful if obscure pre-war flat top creations, the SJ-100. After introducing the over the top fancy rosewood SJ-200 at a whopping $200 in 1937-8, Gibson logically decided a not so wallet-busting version might appeal to less well-heeled cowboy players. The SJ-100 duly appeared in 1939, with the same 17" body size and shape but more restrained cosmetics and some less high-end materials. Two distinct versions of this initially $100 guitar were offered up through the turn of 1941-2, but the model never really caught on and disappeared when production wound down as the war began, never to really return.

This guitar is the 1941 version of the model, with some mostly cosmetic changes from the first introduced two years before. The first ones had an odd stair-stepped peghead shape, shared only with the similarly rare J-55 and ES-250 models of the same year. This no doubt proved annoyingly complex to produce, especially on mid-line models and was quickly supplanted on all three with a standard Gibson version. The first SJ-100's had a simplified version of the cutout "moustache" bridge used on the j-200, but that soon gave way to the simplified two-tiered solid piece used here, shared only with the J-55.

Distinctive features of all SJ-100's include a 17" jumbo mahogany body with a spruce top, ornamented with unusually thick triple binding on the top edge with a single layer on the back. The large stepped-edge pickguard was also shared with the J-55 and made of the flashy "firestripe" celluloid seen only on pre-war Gibson instruments. This actually covers the soundhole ring, a quirk used specifically on guitars Gibson aimed at hard-strumming "cowboy" players, who tended to wear the finish away quickly in that area!

The SJ-100 is fitted with a 2-piece curly maple neck topped by a bound dot-inlaid Brazilian rosewood fretboard, which is quite dark. Oddly enough ebony was specified in the 1941 catalog but deviations like this are standard Gibson fare. The fairly plain black-faced headstock is ornamented with the thick pearl "Gibson" logo of the time and fitted with early openback metal button Kluson tuners.

The SJ-100 is a very rare guitar in any form. Only 59 were shipped in 1941, and the grand total for all pre-war versions is well under 200; just 138 are accounted for in available shipping records. The 1939 price was originally $100, raised to $125 as the run-up to war caused rapid inflation. Famous users at the time included blues master Lonnie Johnson and WWII yodeling western star Elton Britt. Later on one can be seen with Nashville legend Lil' Jimmy Dickens, who seemed to take a perverse pleasure in hanging oversize guitars on his diminutive frame.

This guitar is easily the finest example of this pre-war cowboy classic we have seen. It shows only minor wear and plays perfectly. The sound is big, rich and powerful, it rings out with plenty of volume, punch and an epic sustain. The mahogany 17" jumbo is an almost unknown recipe; based on this the idea ought to be revived immediately! With its short lifespan and so few built the SJ-100 is unfortunately an extremely rare guitar, and even many experienced collectors and players have never even seen one. Examples as finely preserved as this are rarely encountered, and if the pre-war "Cowboy" flat top is your wheelhouse it is a unique joy to experience!

This instrument is in spectacularly clean condition for a pre-war Jumbo, and does not show signs of heavy use over the last nearly 80 years. The finish still shines with its original gloss and there are only some small scrapes, dents and dings to detract from its original luster. It is rare to find pre-war flat tops at this level showing this little wear, one does a double take at first glance but the finish is original and beautifully preserved.

The guitar does show some fairly discreet and well-executed repairs, mostly dome to optimize playability. The guitar has been neatly re-fretted with era-appropriate wire. The original two-tiered bridge is intact but has been re-worked slightly with the string slots angled a bit, and a new bone saddle made. A replacement correct pattern thin maple bridge plate has been fitted, with the original bridge bolts left in place. All else on the instrument is original.

There is one repaired mahogany grain split on the back, coming off the lower waist area. This has been solidly sealed but not finished over. There is a minor repaired seam split to the neck center stripe in the heel area and some light overspray around the heel, both certainly souvenirs of an otherwise well executed neck reset some time back. This is simply a stunning pre-war Gibson gem, a fantastic guitar to play and a real showpiece complete in its very clean original tweed "Aeroplane Cloth" HSC. Excellent Condition.
×