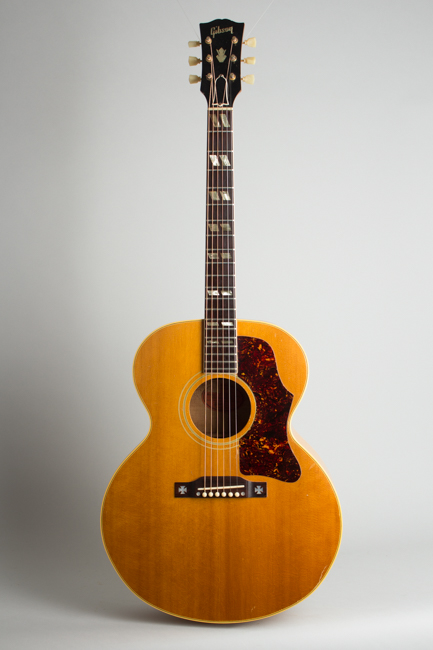 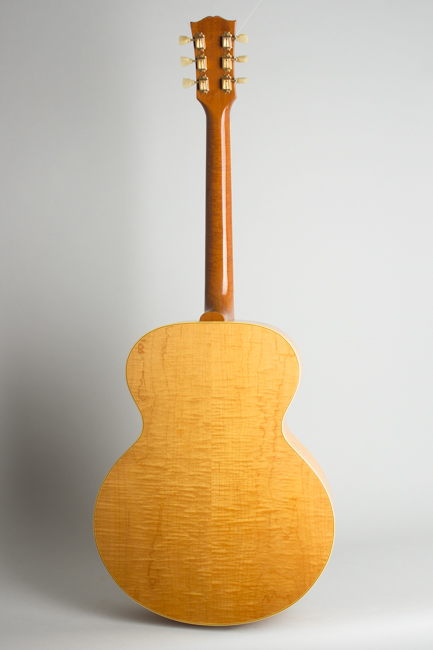 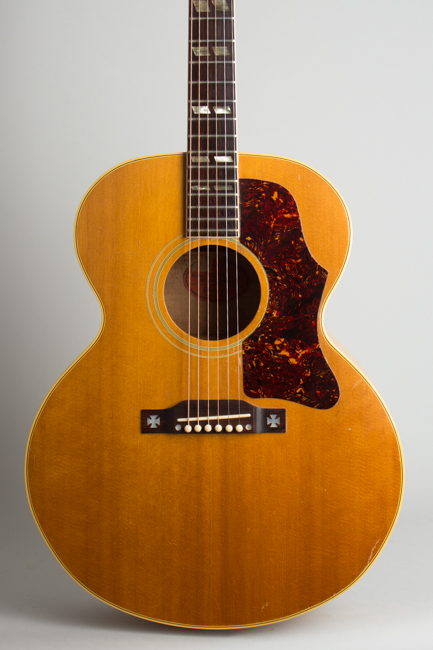 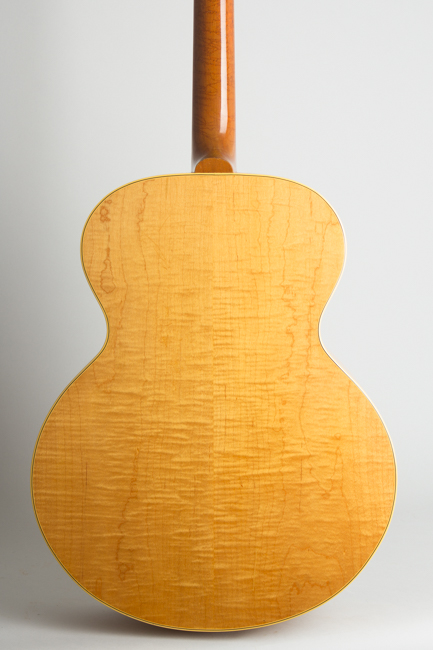 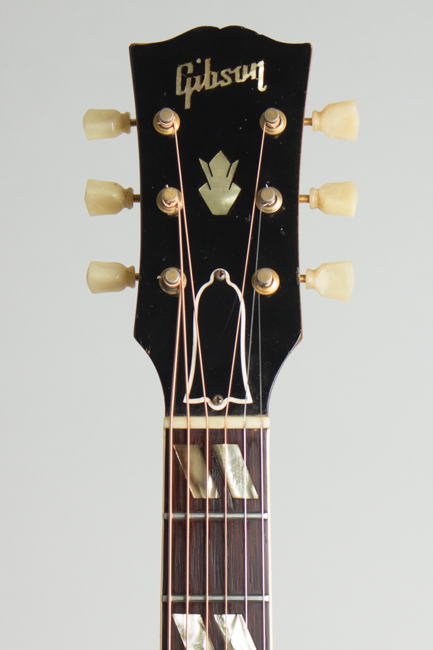 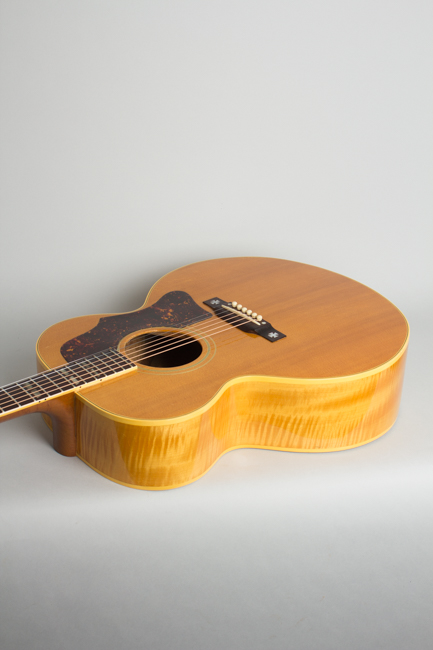 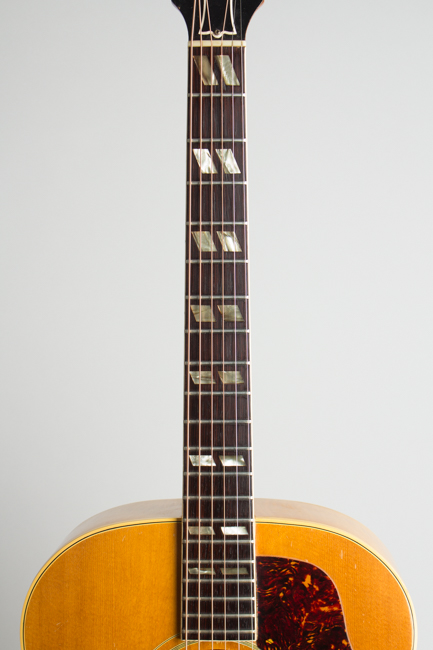 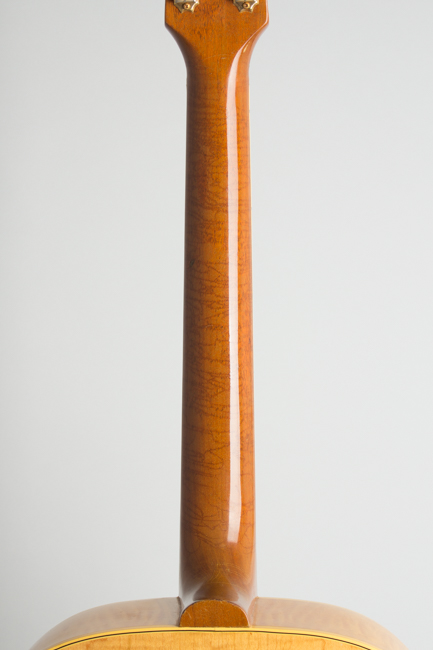 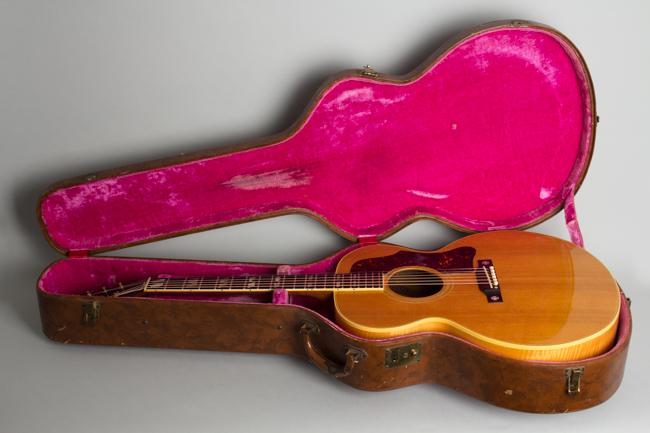 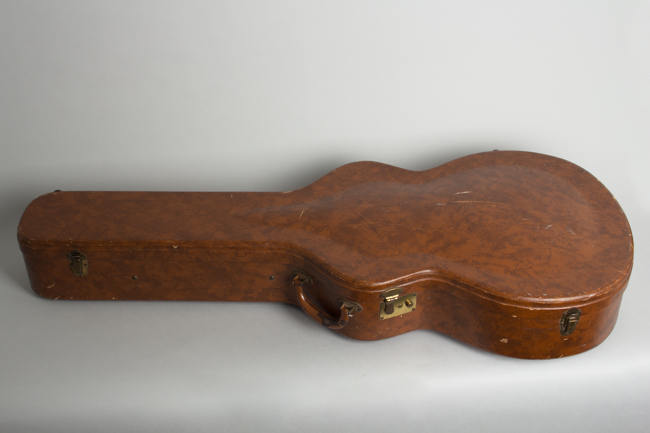 The Gibson J-185 has gained a reputation over the years as one of the absolute finest of all Kalamazoo-made flat-tops, and remains a unique design. In production for only a fairly short time in the 1950s, this 16" narrow-waisted Jumbo model never really established itself with players at the time but has garnered a splendid reputation in retrospect. This model represents Gibson's second attempt to create a less expensive guitar to complement the top-of-the-line "King of the Flat-tops" SJ-200, the first being the virtually dead-on-arrival SJ-100 of 1939-41.

The J-185 was introduced in 1951, basically a plainer 16" wide version of the more "yee-haw" 17" J-200. The slightly smaller body has the same narrow-waisted shape and materials but generally lighter construction, resulting in a handier, more responsive guitar. The cosmetics are a bit plainer, but this is still a relatively fancy and impressive-looking instrument. This stunning natural beauty has spectacular flame maple back and sides and a tight-grained spruce top, perfectly spotlighted by the slightly ambered clear finish. The top and back are triple-bound and the tortoise celluloid pickguard is the same shape but thinner than the J-200 style, as it is not ornamented with engraving.

The nicely slightly chunky round-profile one-piece mahogany neck is topped with a bound rosewood fingerboard sporting Gibson's classic double parallelogram inlay. The unbound headstock has a crown inlay on the face and mounts gold-plated Kluson deluxe tuners with keystone buttons. A unique feature of the J-185 is pearl Maltese crosses inlaid on the wings of the "belly-up" rosewood bridge, an attractive cosmetic touch reserved for this model alone.

This particular guitar was shipped around late February of 1956, the model's peak production year. It wasn't much of a peak, as only 59 natural examples left Kalamazoo that year, out of a total of 270 in the entire decade. Gibson made more J-45s than that every month! The J-185 was a victim of the "Midline Blues"; most folks who could afford one went right to the top and bought a J-200, while the rest stuck with the familiar and more affordable J-45 family of round-shoulder mahogany Jumbos. The model was discontinued in 1959, never really having established itself in the crowded flat-top guitar market.

Since then its reputation has grown considerably, and the J-185's relative rarity has made it the most sought-after post-war Gibson flat-top. A very few name players had one in the 1960s, notably blues legend Skip James at the tail end of his career. It is a different blues connection has made the guitar much desired among fingerstyle players, however. While the Reverend Gary Davis generally favored Gibson's J-200 during the 1960s, many of his students and acolytes do not play with the same driving force as their blind master. The lighter and more responsive J-185 has come to be the preferred instrument among many who preserve and expand on the Reverend's distinctive style. Dedicated players in this idiom are the prime audience for this model, but the J-185 is a superbly versatile guitar with an exceptionally smooth, rich, and expansive tone for a maple bodied instrument. This is one of those guitars that truly lives up to its considerable reputation, simply one of Gibson's greatest if originally sadly underappreciated instruments.

This is a superbly clean, all original and great-playing example of this much-desired instrument, absolutely the finest we have had. The natural finish has some dings, dents and scrapes, mostly on the top but overall is quite nicely preserved. The neck finish has some minor discoloration along the lines of checking, probably from application of some polish or oil applied that leached into the check lines. This is not overly conspicuous and cannot be felt at all.

There are two small repaired grain cracks to the top, both due to shrinkage on the top edge of the original celluloid pickguard. One is just off the treble side of the fingerboard to the soundhole rim, the other along the 'guard's top edge between the soundhole and bridge. Both are sealed up well with minimal fuss. There is one small grain check on the back near the upper waist that does not go through the wood. Even the white plastic bridgepins and endpin remain original. The upper left-hand corner of the orange Gibson label is missing, but all information is still intact and legible.

The fingerboard and the original frets show very little wear, and this is simply a spectacular playing and sounding guitar. It excels at the sort of ragtime and fingerstyle blues picking the model is renowned for, but also is a superb straight rhythm instrument for everything from old-time through honky tonk sounds to Pete Townshend style rock flourishes. One guitar that absolutely lives up to its stellar reputation, complete in its original classic brown Gibson HSC. Excellent Condition.
×