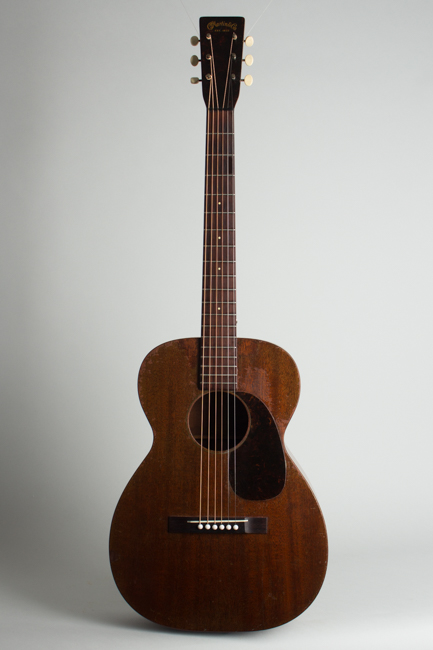 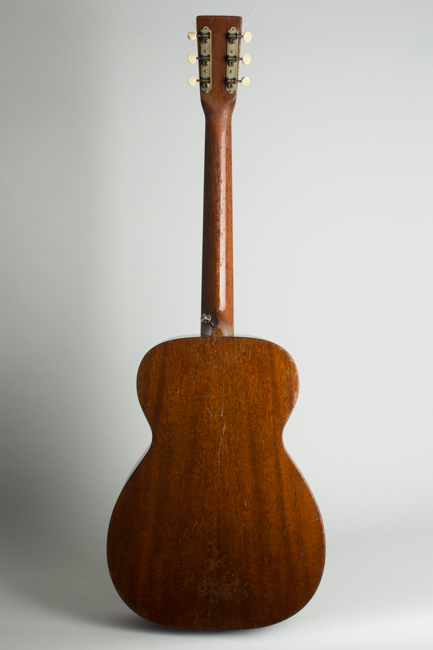 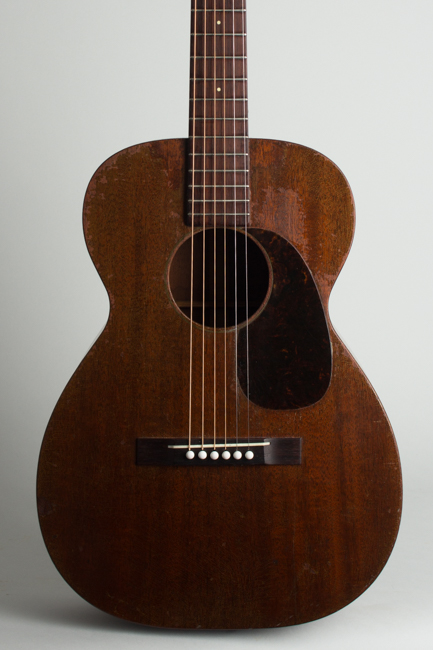 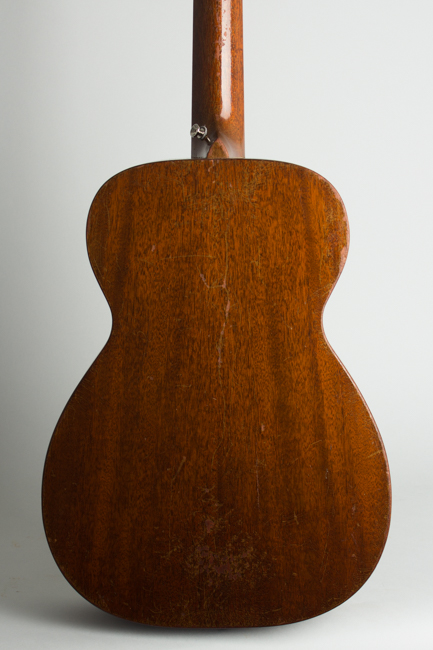 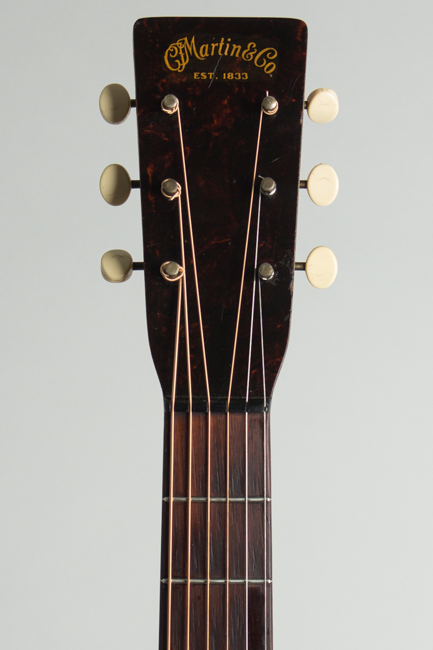 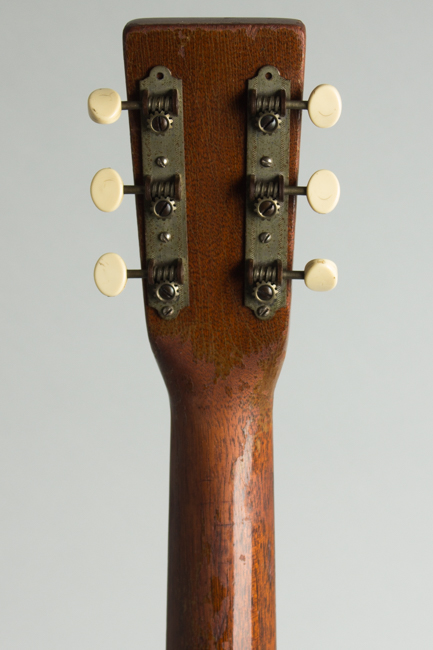 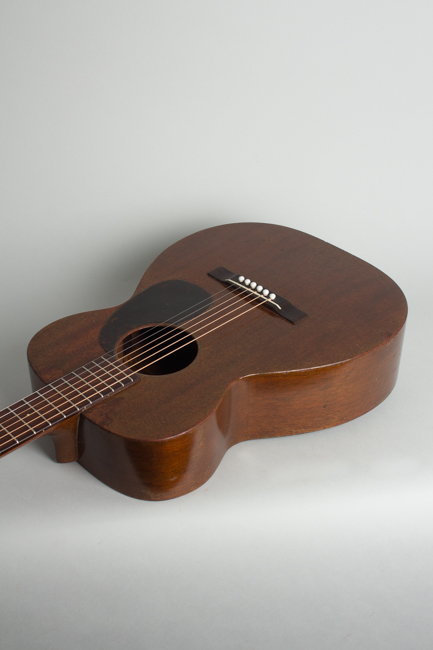 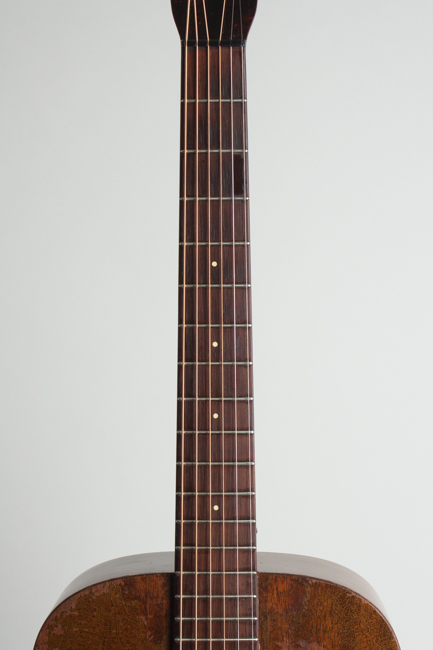 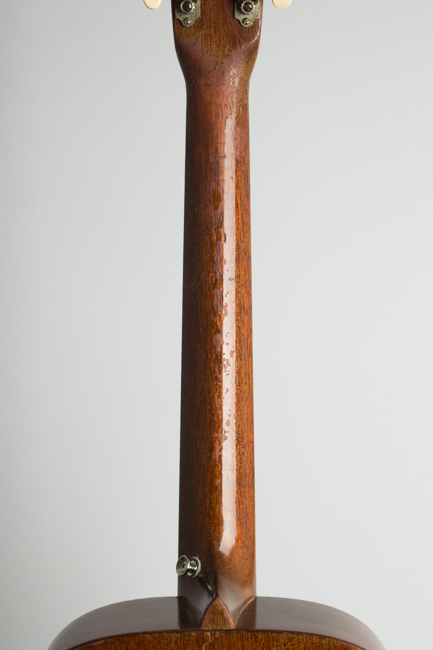 This is a well-worn but great-playing early wartime 0-15, the lowest-ranked guitar model in Martin's 1940's line. This particular guitar was built during the brief period when Martin experimented with using tortoise shell plastic peghead overlays, and it sports a particularly attractive example of that rare feature. Besides this oddity the 0-15 -- first produced in quantity in 1940 -- is a study in tasteful economy with decorative appointments kept to a minimum. There is no ornament on the mahogany body and neck besides a W/B/W sound hole ring, tortoise celluloid pickguard and gold Martin logo decal on the headstock. The matte lacquer finish was less heavily polished out than the otherwise identical all-mahogany Model 0-17 but structurally the guitars were the same.

The tuners on this guitar are old but not original; they are openback plastic-button Waverly strips from the 1950s. All else appears original. The neck did not have a metal rod installed (a casualty of the war) but still remains straight and true. This guitar has been well used and shows some scars but retains a surprisingly loud voice, and sounds great finger- or flatpicked. The mahogany top retains the pre-war scalloped bracing, which allows it to resonate more freely than the somewhat stiffer postwar versions. While this was the least expensive Martin guitar in 1942, listing for $28.00, it still is built to the expected Martin standard of quality and has stood the passage of time and tide extremely well.

This is a fairly well-worn but still fine playing little all-mahogany Martin. The finish has quite a bit of wear overall showing 75+ years of dings, dents, and scrapes and signs of having been exposed to moisture long ago. There is some fairly heavy checking overall and minor old flaking on the lower back and the back of the neck. There is some fairly heavy pickwear on both sides of the fingerboard that has had a bit of sealer applied, and a fairly deep gouge into the wood in the armwear zone on the top/side edge.

The top has one repaired grain crack from the back edge to almost the treble corner of the bridge, solidly sealed but not overfinished. There is also a slightly sloppily repaired crack just off the top edge of the pickguard to the soundhole rim. There are two relatively inconspicuous sealed cracks on the back, again with no added finish. The back of the neck shows dings and dents mostly along the spine, with a decent amount of finish worn away. The top of the bridge was cut down somewhat long ago, but the bridge and bridgeplate remain original. The neck was reset sometime back as well.

The frets and fingerboard show some light wear; the guitar appears to have been neatly refretted with correct style wire. One spot in the fingerboard on the treble side between the second and third fret has had some fill/polish out work done. The neck is nice and straight. The tuners appear to have been fitted in the 1950's; there were no bushings added and original style pegs could be refitted if desired. G string shaft is slightly bent but still functional.

This is far from the cleanest 0-15 we have had but one of the nicer-sounding ones and a genuine survivor. It rings with a bright but never shrill sound and is a superb player's small mahogany Martin. We'd call this one "Ragged but Right" in the Riley Puckett tradition. Very Good + Condition.
×