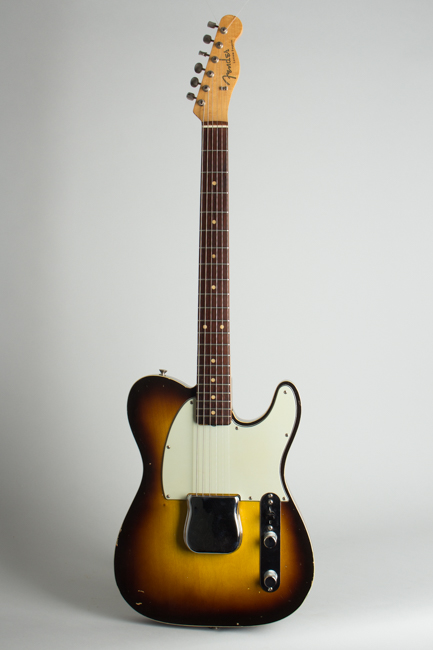 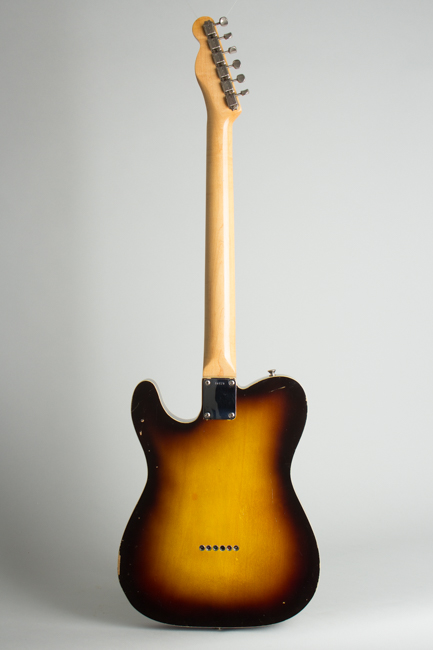 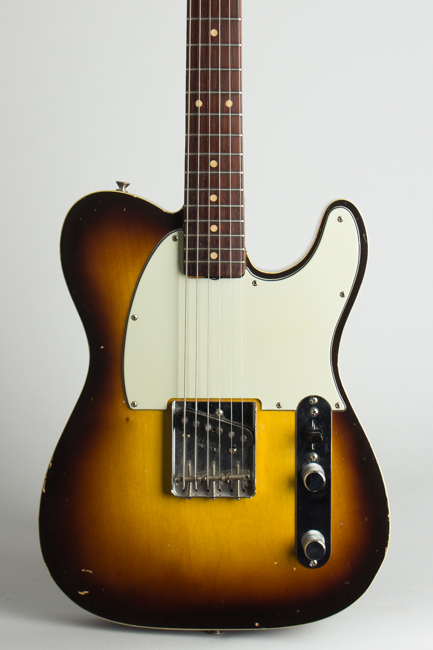 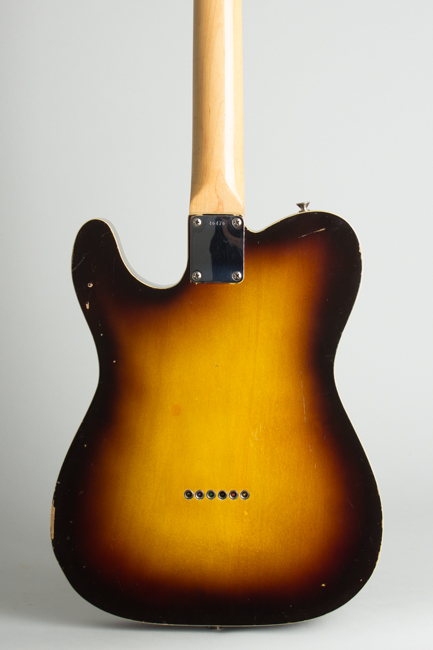 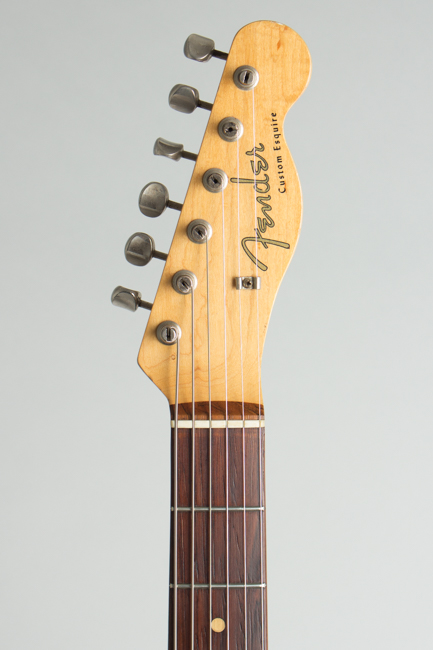 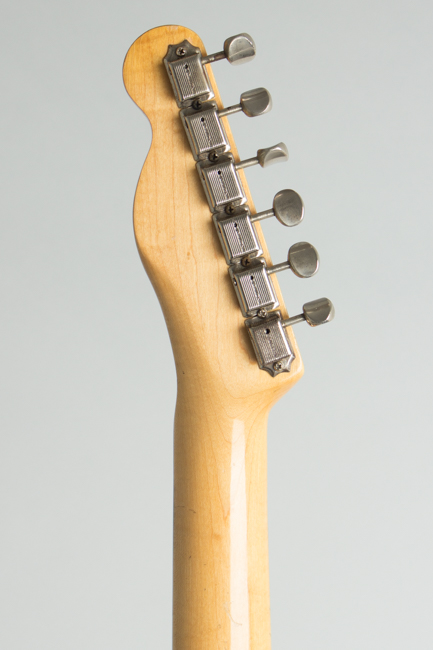 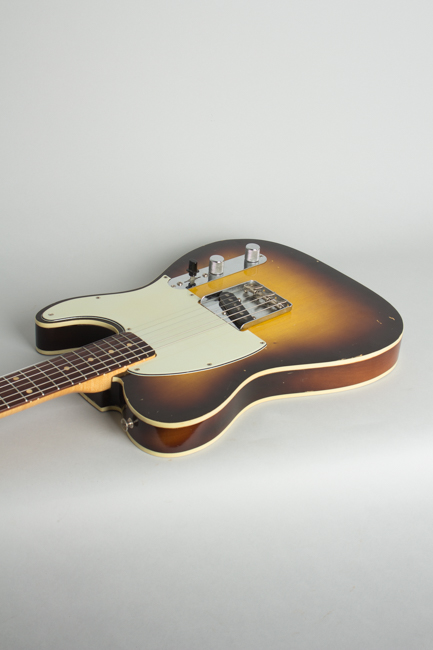 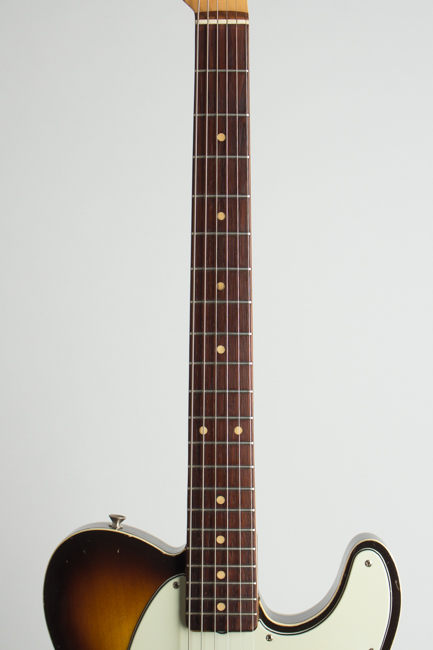 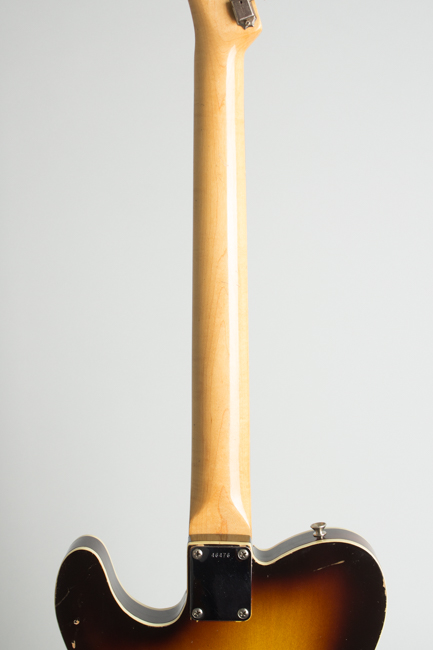 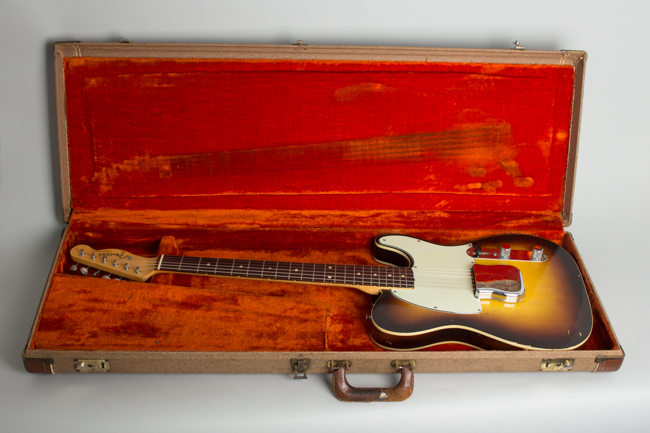 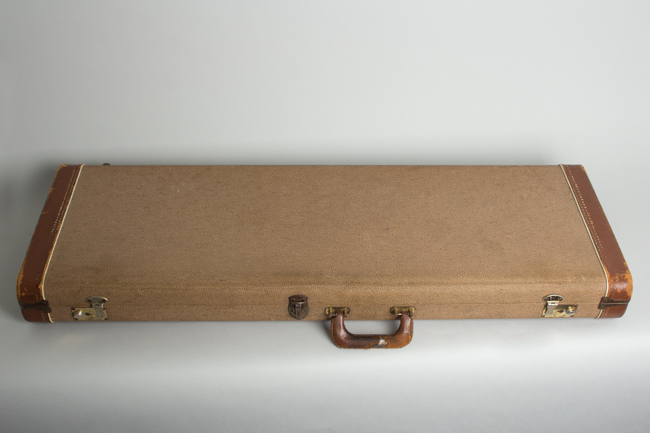 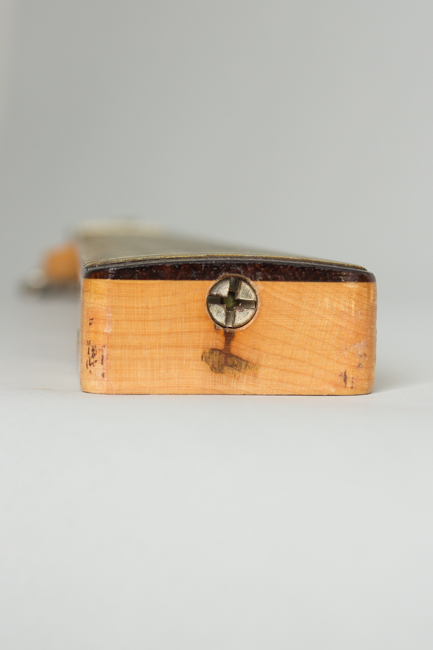 Here is one of our very favorite ( and relatively rare) Fender guitars; an original first generation bound-body Custom Esquire. In early 1959 Fender decided to offer flashier versions of the plain-looking Telecaster and Esquire, their original standard guitars. These models had been available for nearly 10 years at that point, and perhaps thought to be lagging behind the sleeker Stratocaster and brand new liquid-sculpture Jazzmaster in eye appeal. "Two Fender Favorites have a startling new look" exclaimed the 1959 brochure introducing the new versions.

The slab-sided alder body is bound with white celluloid on the edges and the pickguard was made of the new heavier laminated celluloid Fender had just discovered, ostensibly white but showing a pale-greenish hue in practice. They also had the new "slab" rosewood fingerboard just introduced in place of the earlier maple. The Customs were introduced at the 1959 NAMM show and although available for just over 10 years were never made in large quantities. The Custom models were more striking-looking, but offered no sonic advantage over the regular models and were somewhat more expensive.

This is an early example of the relatively rare single-pickup Custom Esquire variation, with an two-piece alder body dated 5/59 which would have been part of the initial batch of these bodies created. There is no date penciled on the neck heel which is correct for the second half of 1959 and early 1960. The pots are date coded to the 9th week of 1960, so the guitar was likely assembled and sold in the spring of that year. This "high-end" Telecaster/Esquire idea seems to have not been as big a seller as perhaps Fender Sales hoped, and we have seen several examples with 5/59 body dates assembled well into 1960 as the pre-stocked bodies were used up!

Apart from the cosmetic upgrades the Custom Esquire is essentially the same as its plain vanilla sister. The single pickup in the bridge position is mounted to a metal plate also carrying the three adjustable threaded saddles for the strings, which feed through the body. One quirk of this guitar is the bridge is still drilled at the back for the "top loader" stringing Fender had tried in the late '50s. Although negative response to that design change caused the company to revert to the original style of through-body stringing before 1960, Leo Fender never discarded good parts, so these "double drilled" bridges were used up over the next couple of years.

The single staggered-pole pickup is controlled by a volume, tone, and 3-way switch with a "top hat" tip offering three tonal options: the #1 bass-heavy rolloff setting, the #2 straight tone control, and #3 "bypass" sending the signal straight to the jack. This last setting is the Esquire's secret bonus, offering some of the finest, snarliest tones ever to emerge from the Fullerton factory. This is fantastic sounding guitar-especially for having just one pickup-bright but not thin, twangy with bite and body.

By 1960, sales of both versions "budget" single-pickup Esquire were slow, outpaced by newer Fullerton models with the lower-priced Duo-Sonic and Musicmaster covering the student market. As the 1960s progressed, Esquires were ordered in ever-shrinking numbers, making it much rarer than any given year's Teles. This 1960 example has survived the 60 years since very nicely, a Fender rarity that's a joy to play...even to just hold! This gussied up Esquire remains a fantastic example of the original Fender aesthetic, one of the coolest of Leo's children we have seen in a while!

Overall this is a very clean and original guitar, showing some play wear but no heavy finish loss. The original finish has a slightly shinier patina than many Fenders we see from this area appear but blacklights perfectly with no overspray or touchup visible. It appears to have possibly been polished over the years by a careful owner. The colors of the sunburst have faded somewhat, and the coloration in the areas under the pickguard, bridge and control plate present as exactly correct. The finish shows some small dings, dents and scrapes overall with the only notable loss being some flaking from exposure to moisture on the side in the area of the jack.

All fittings and hardware are correct and original including the complex multi-capacitor Esquire wiring rig. The plating is relatively clean with some scuffing to the "ashtray" bridge cover. The guitar appears to have been played mostly with that cover on as the bridge and saddles show minimal wear. There is one oddity -- a tiny hole drilled through the headstock from the rear just below the low E string tuner shaft; we have no idea when or why. It is hidden by the tuner plate on the back, and neatly patched on the face but the reason is lost to history. It is plugged very neatly and may actually be a factory error, but it's difficult to say for sure.

The pickguard has some very slight shrinkage as would be expected but no pulling or cracks at the screw holes. The original frets are in excellent shape with only some very light wear in the lower positions, and the guitar plays extremely well. The clay dot rosewood fingerboard shows hardly any wear at all. This is a wonderful guitar to play, with the classic Esquire "less is more" sonic character that we are always drawn in by. It dwells in a correct early '60's Fender brown Tolex case where both it and a Stratocaster have lived at various times, and is ready for the next 60 years and beyond. Excellent - Condition.
×