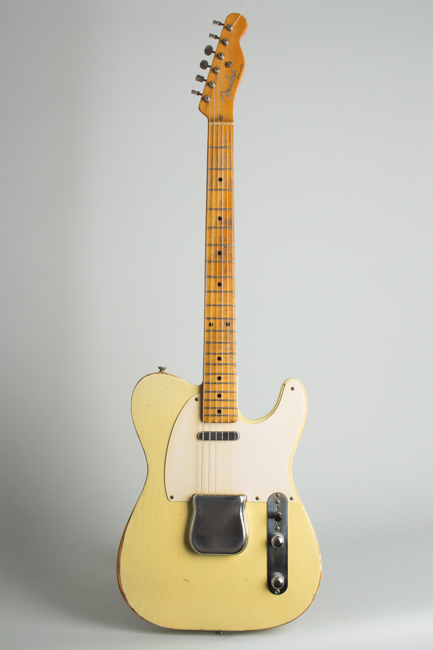 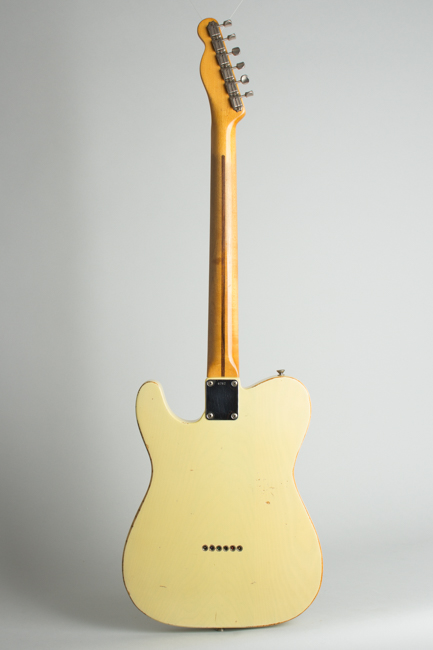 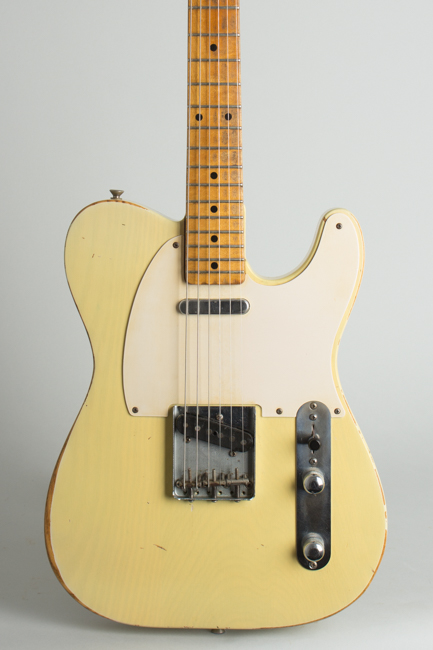 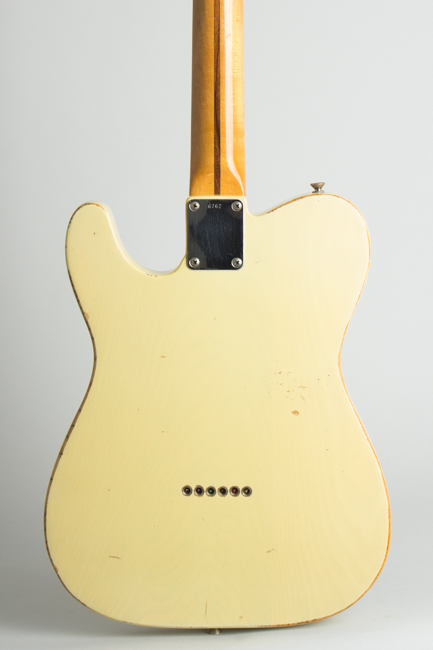 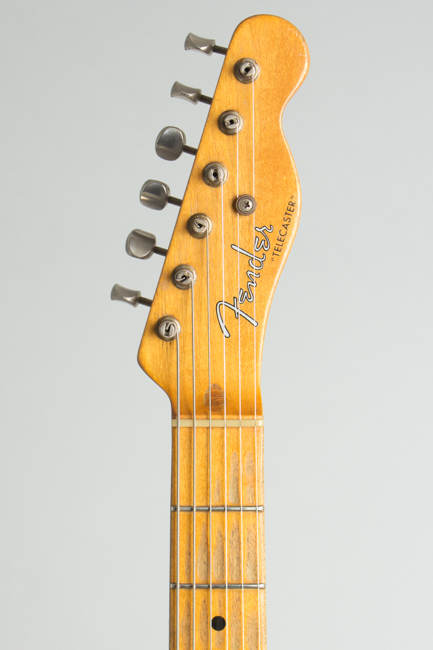 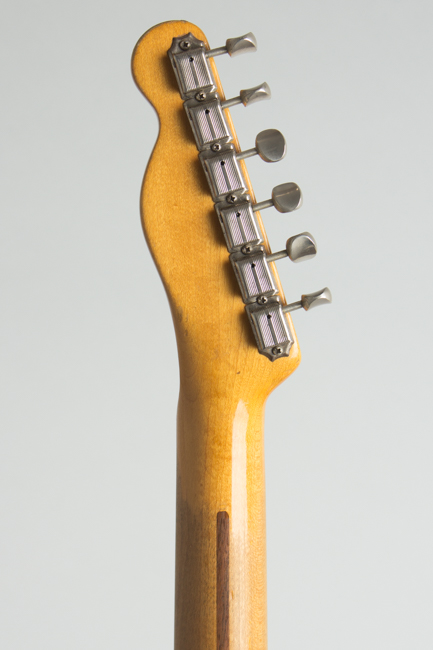 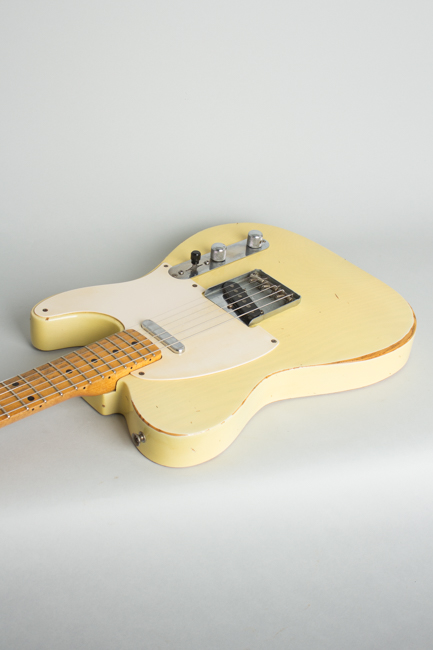 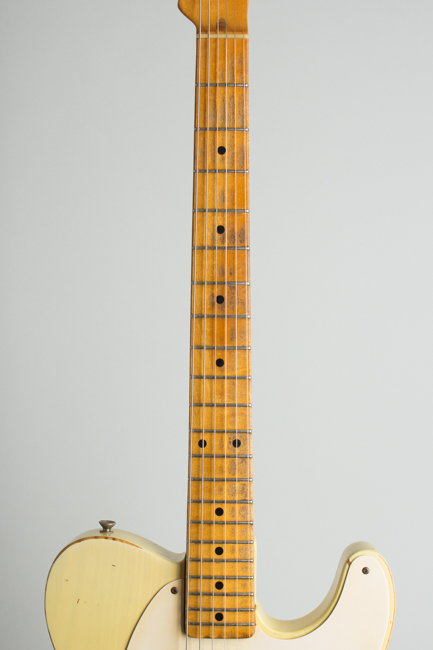 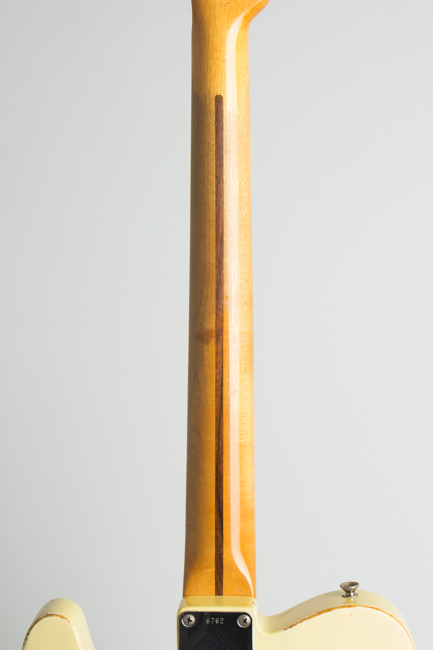 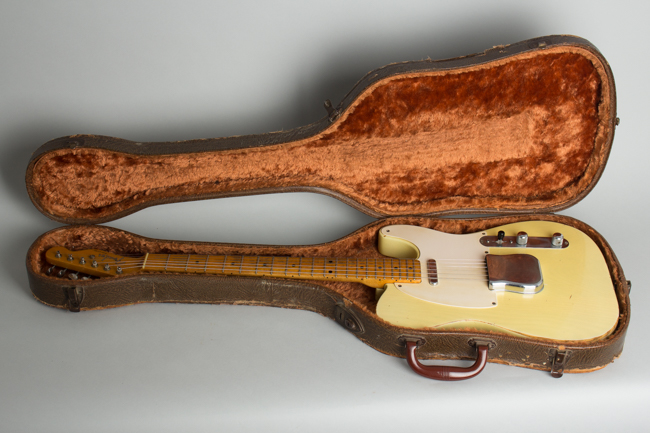 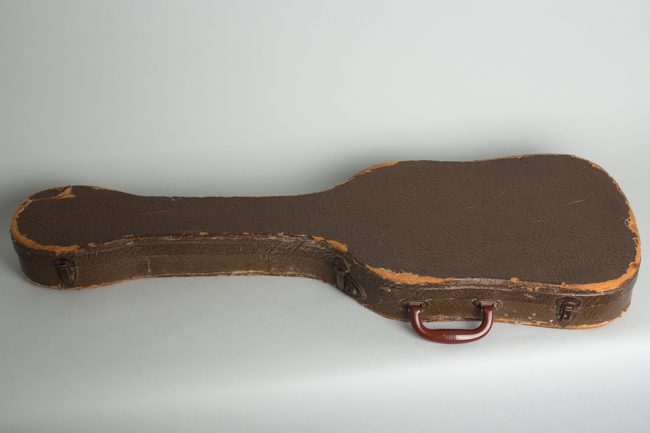 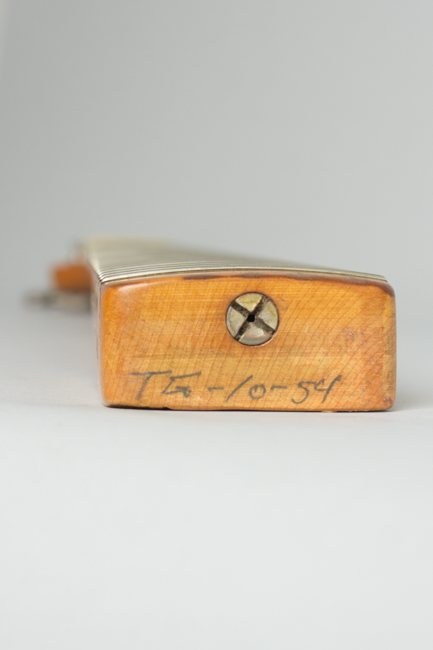 This lovely VERY early "white guard" Telecaster is a superb example of original Fender greatness, simply a fantastic playing and sounding instrument. It is also an interesting transitional Tele that retains many characteristics of the "Blackguard"-era guitars, which run up until the end of 1954. Essentially this JUST 1954 guitar is a "blackguard with a white guard"...if that makes any sense! This Telecaster was made just as the run up to Christmas '54 was kicking in (maybe it was originally under someone's tree that year!) and shows a mix of features specific to this exact time period.

The most noticeable feature is a very early example of the then-brand-new single-ply white plastic pickguard, just then starting to replace the earlier black phenolic piece on Teles and Precision Basses. On the headstock, the old script Fender "Telecaster" logo decal still sits below the original style round string tree, both unchanged from 1951. The very beautifully grained ash body has a yellowed blonde finish, not as dark or amber-colored as the earlier '50s style tends to age into, but with a more distinct yellowish hue than the "white-blonde" that would be the norm in the late '50s. The guitar appears somewhat "smoked" and retains a lighter, whiter blonde look in the hidden areas under the pickguard and hardware. The "white" guard itself has a noticeable darker "smoky" look on the top side as well.

The one-piece maple neck is dated 10-54 on the heel with the Taddeo Gomez signature and has a chunky round profile with just a hint of slope to the shoulders, much more like the earlier '50s style than the "V" that was to come. We have seen blackguards with 11-54 neck dates, which shows the typical inexact chronology of assembly at fender. The body is dated under the finish in the neck pocket 7-54 in what looks like red grease pencil, with the mysterious signature "D" die stamp evident as well. This sat in stock for some months before being assembled, which again is not an unusual find. The original style flat-pole pickup at the bridge is still in "Blackguard" sound territory; the staggered-pole variant introduced the next year would change the tonal character of the guitar somewhat.

The neck pickup has been rewound by very well-regarded wiring wizard J.M. Rolph, and sounds exactly as it should. All internal components remain original. The original switch and wiring have not been altered to "modern", the forward "mud cap" and original control settings are still intact. These are, on the 3-way switch: #1 neck pickup on bass-heavy rolloff setting, #2 neck pickup with straight tone control, and #3 bridge pickup with tone control. The pickups can be blended by carefully positioning the switch in the "2 1/2" spot.

There is a visible pot date of the 43rd week of 1954. The wiring up was done by Gloria on 12-12-54 when she left her name large and clear on masking tape in the cavity. The 4-digit serial number is stamped on the neck plate, having just moved there from the bridge plate when Fender harmonized all their electric instruments into one number series right around this time. The bridge has the "angled back" steel saddles typical of this period.

Essentially a blackguard in a new lighter suit, this December 1954 Telecaster is a fantastic sounding guitar, a joy to play, and even to just take out of its original 1952-style case and just hold! This is one of the latest Teles we have seen still equipped with this first-generation case. If not a Christmas quickie this guitar was likely sold in early 1955, by which time the Telecaster was already popular tool for a host of country and the earliest rock'n'roll and players. Many have been played into the ground, refinished or heavily modified in the years since but this one survives with its original character and sound fully intact.

This used but not abused '54 Telecaster shows typical general wear and signs of professional use but overall remains a nicely cared for 1950s Fender. There is some noticeable wearing down to the body edges, but the finish on the face and back are comparatively clean, with some small dings, dents and scrapes. There is only one noticeable scrape in the center of the top, and a chip on the lower horn; mostly the face has escaped heavy wear. The body finish has yellowed noticeably on the exposed areas, and is much "whiter" in the unexposed spots. The pickguard has also yellowed and darkened on the top surface, all likely from exposure to smokey bars over the years. "I'm Smokey Bar, only you can prevent Telecaster curdling".

The neck shows evidence of a lot of play time but again nothing tragic. The maple fingerboard has a lot of typical wear through the lacquer from the first position all the way down, with what looks like a bit of "Strum wear" at the lower end of the fingerboard. The frets are an older correct style refret, with just a bit of wear on them since. The fingerboard looks to have been polished out a bit during this procedure, but there is no sign of any lacquer overspray added. The nut is a well-done replacement. The back of the neck is softly worn down over much of its length giving that classic "played-in Fender feel.

All hardware remains original except as noted the neck pickup was re-wound not too long ago, so the solder joints for it were neatly re-done. Other than this all electronics and wiring remain original. The chrome plating shows some wear; there is a bit of scuffing to the neck pickup cover, and some heavier plating wear and minor loss on the control plate. There is noticeable scuffing and plating loss to the snap-on bridge cover, which looks to have been on for a long time although the steel bridge and saddles have some typical wear and corrosion as well.

The original case is fairly well worn with some loss to the edges but still serviceable. The small accessory pocket is completely gone but the handle is still intact and the latches work, with the center "down' tap no longer sprung. This 7.43 LB Telecaster is a lovely package of 65+ year old Fender cool, a great instrument and a fantastic example of the endless transitions many guitars went through on their way to becoming classics. Overall Excellent - Condition.
×