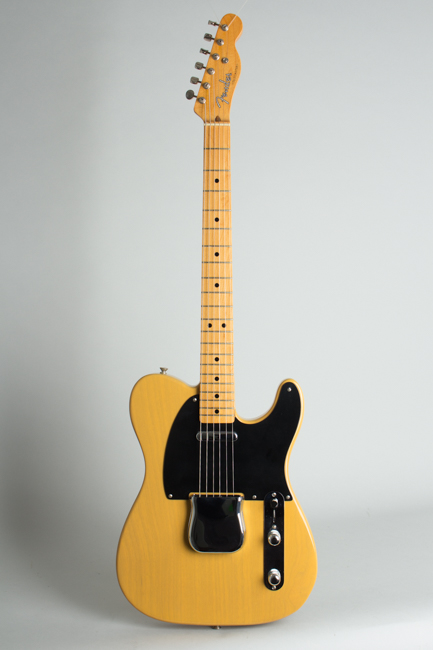 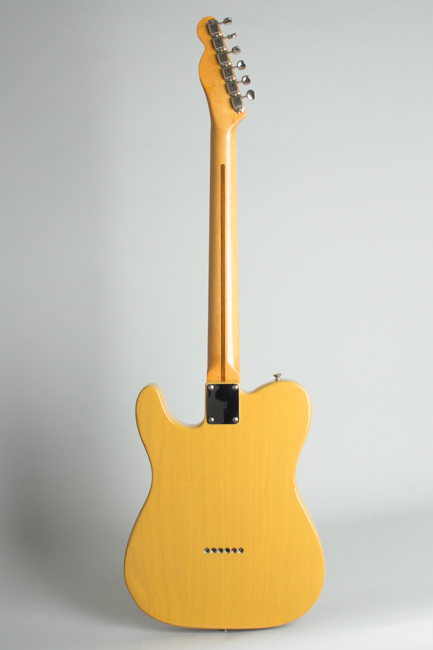 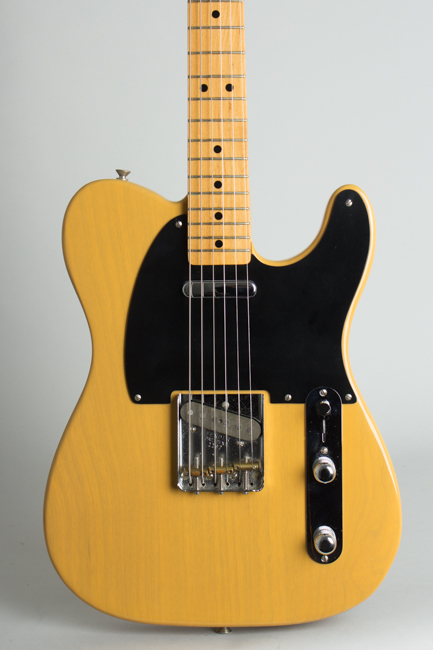 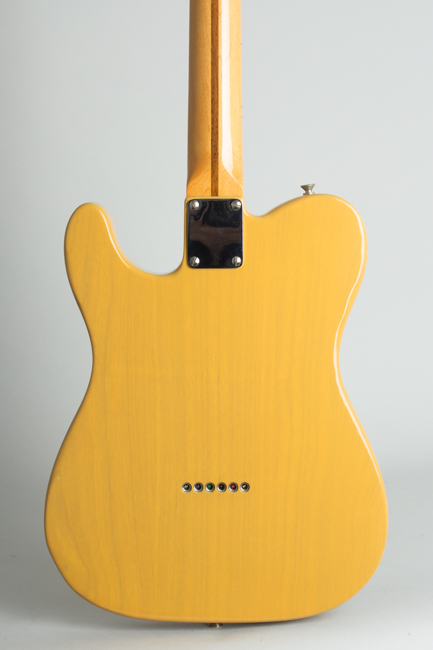 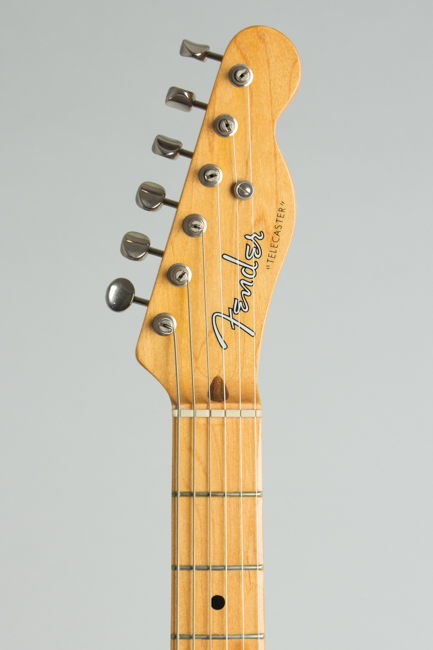 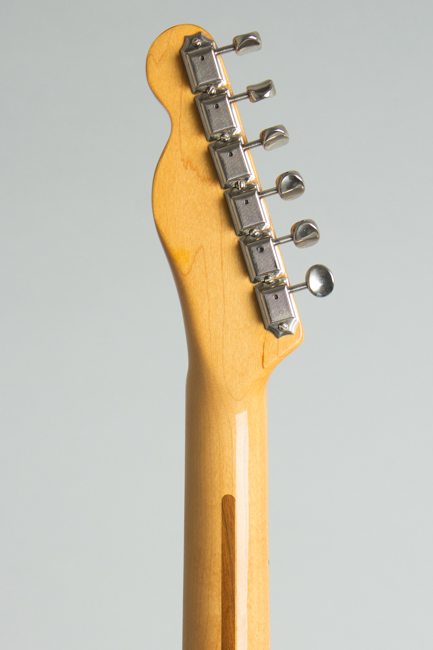 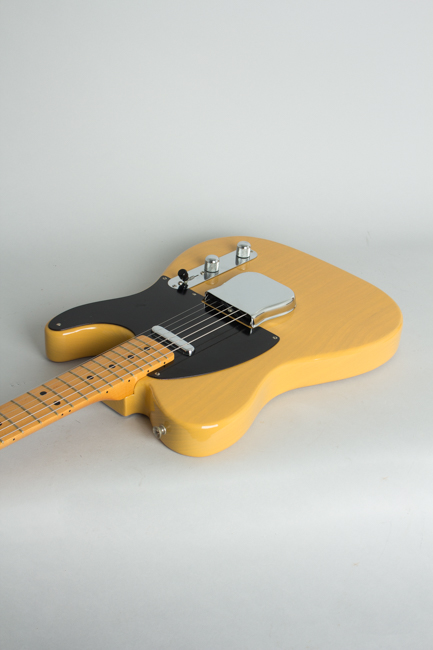 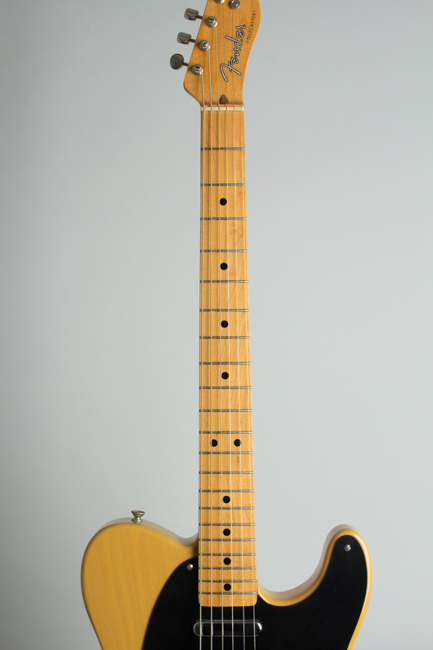 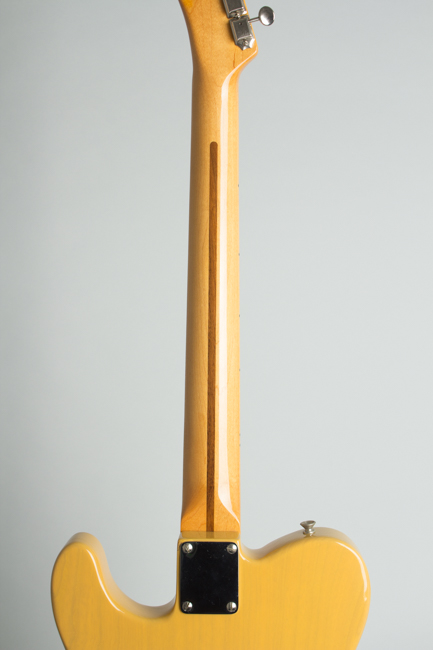 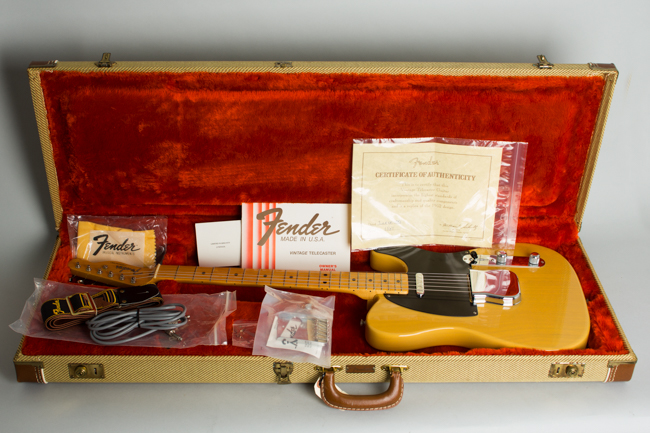 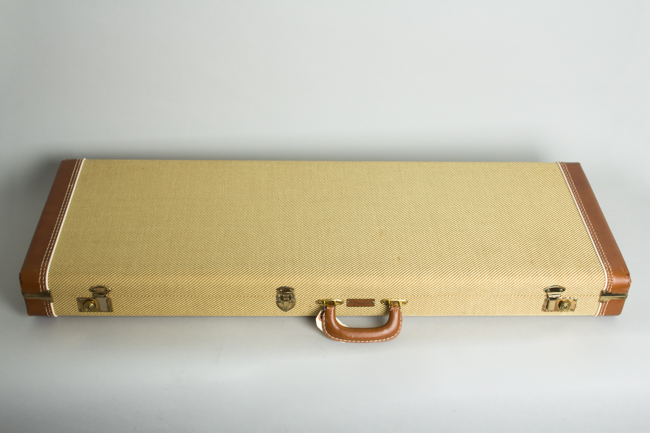 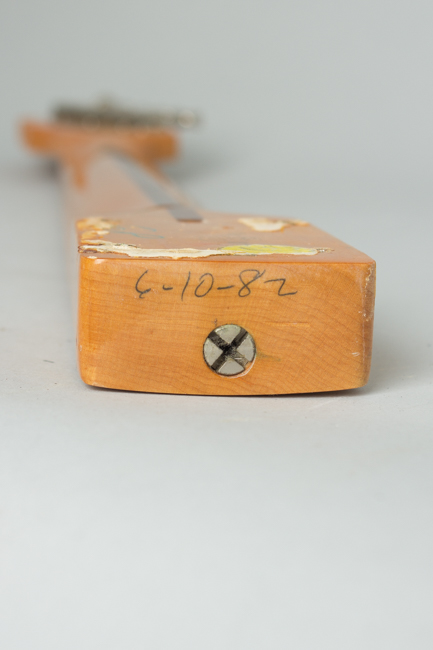 Around the time the CBS/Fender era was coming to an end, criticism from musicians that the corporation had long been sacrificing quality to profitability had begun to sink in with the folks running the company. A group of Fender executives initiated a project to re-issue selected models in their older formats to prove that they could achieve a return to pre-CBS quality. This led to a set of Fenders which were carefully made reproductions of 1950s and '60s classics produced in the original Fullerton, California production facility. These Fullerton-made instruments have become quite sought after in the years since and are known by the collector's acronym -- "AVRI" for "American Vintage Re Issue".

This 1982-built 1952 reissue "blackguard" Telecaster is one of the gems of that short-lived Fullerton-made AVRI line, in production there for only about two years. This was perhaps the signature model of the entire series, a statement from the Fender company that they intended to recapture their original glories. While a successful model at the time this is a fairly uncommon find now nearly 40 years on in this superbly well-preserved condition.

This guitar is a very early production example; the bridge plate is stamped with serial number 1167; the neck is hand-dated in pencil 6-10-1982. The Pots are date coded 8209, the 9th week of 1982. The neck pocket has a large "Vintage" ink stamp and some small inspectors marks. This guitar was assembled in summer 1982, when the AVRI line was being launched in a blaze of publicity. Many players of the time heartily applauded Fender's attempt to re-engage their own history and the instruments were generally well-received.

This guitar is all original, the 3-way pickup selector is even wired in the 1952 "Mud cap" format, faithful to the original if not particularly useful to most players. Parts are included to fit the guitar with a 6-way adjustable bridge and "modern" wiring; it looks like they were never even removed from their baggies which are still stapled shut. The body edges are just a bit rounder than an original '52 and the neck somewhat slimmer in profile, but overall this guitar represents a laudable attempt (the first of many!) to recapture the 1950's "Blackguard' magic.

While these guitars are not EXACTLY accurate re-creations, they were far closer than anything Fender had built since 1966 to Leo's original creations. The Fullerton reissue era was sadly brief lasting only from 1982-84, as Fender was then sold off by CBS and moved to a new Corona, CA factory in 1985. These Fullerton guitars -- made on some of the old machines dating back to the '50s and '60s -- are prized today for their rarity, tone, and direct connection to the original Fender company.

This guitar has been with the original owner since new and is fully original internally and externally. It shows only some very light handling wear; there is one small chip to the lacquer by the lower forward screw for the neck plate. The guitar plays and sounds as fine as it did in summer 1982, now 40 years gone. This Tele is still housed in the very clean original heavy duty tweed re-issue case with a package of the original accessories, parts and paperwork. This includes the Fender strap, vintage-style cord, manual, case keys, extra bridge and electronics rig, certificate of authenticity dated June 25 1982, and a warranty card addressed to the Rhodes division of CBS/Fender that probably landed there by mistake at Fullerton. A true time capsule with the way-back machine set to exactly 40 years ago. Excellent + Condition.
×