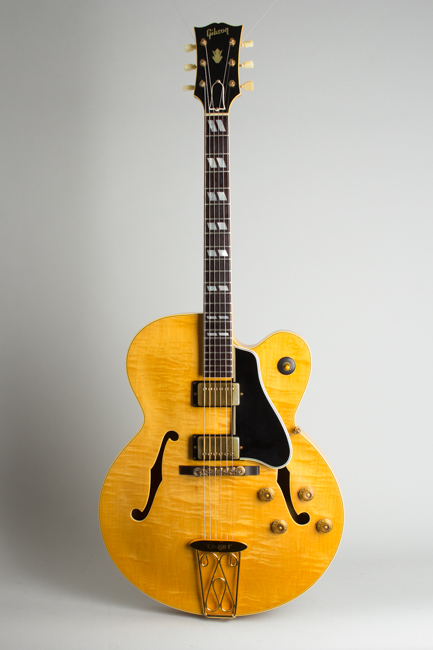 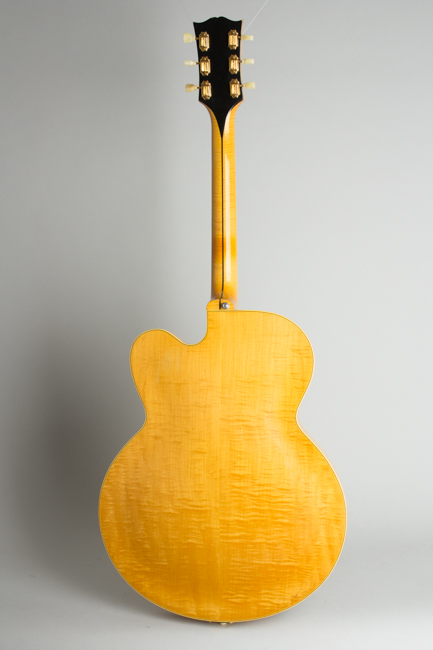 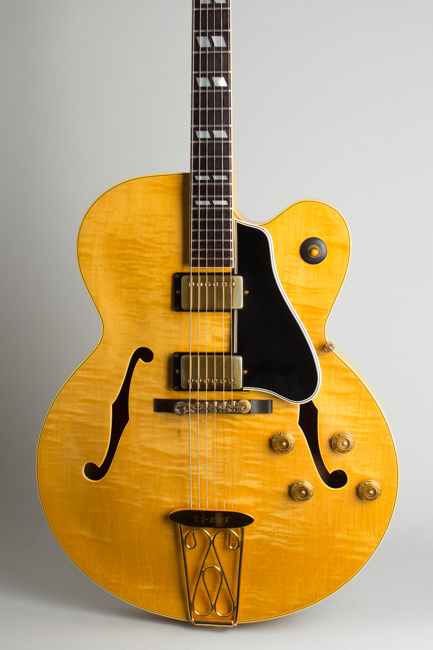 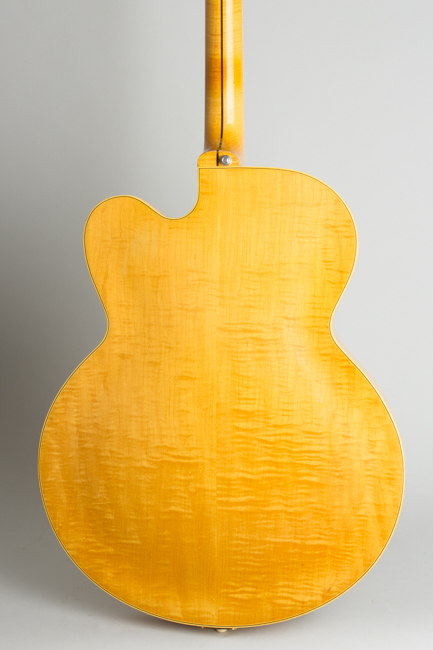 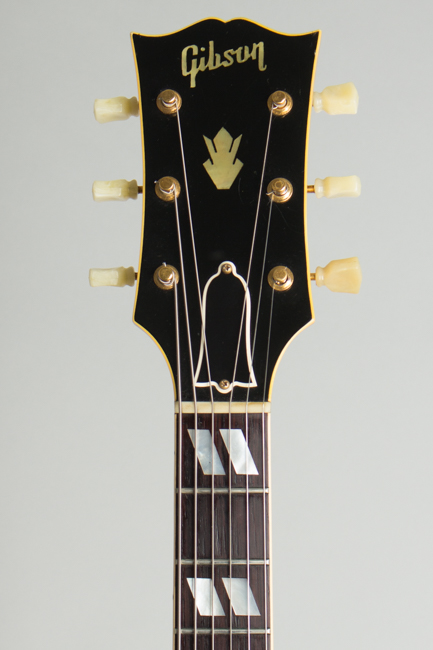 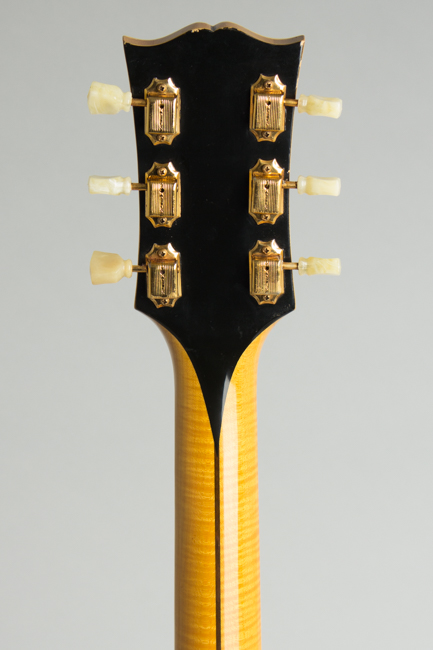 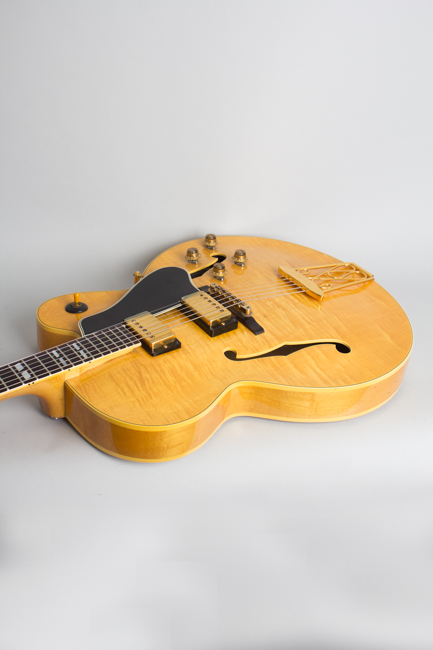 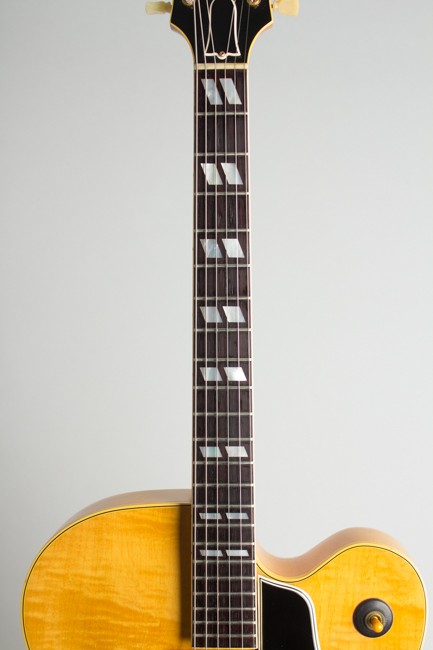 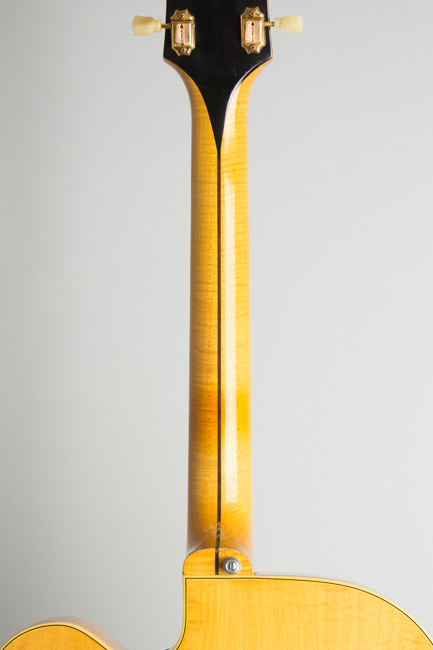 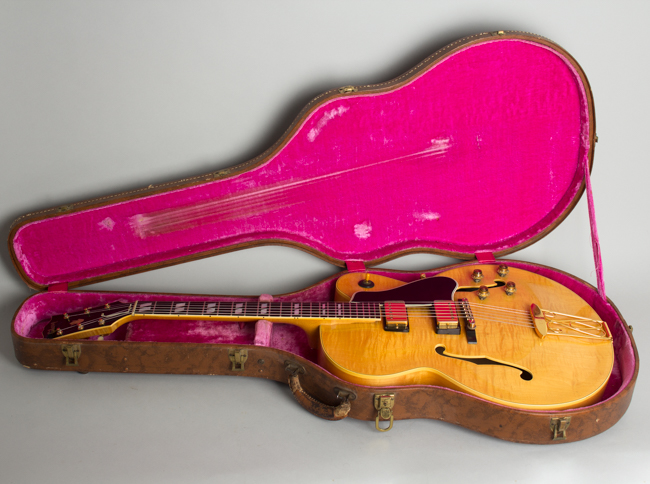 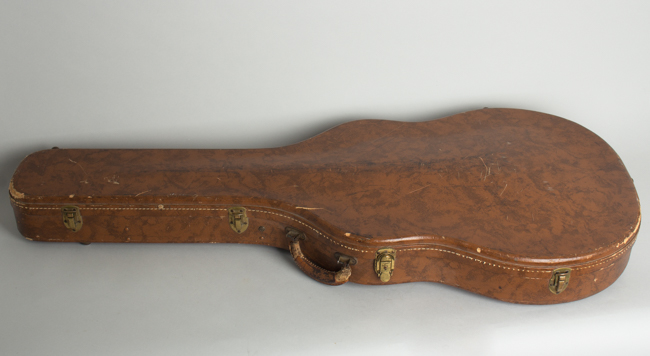 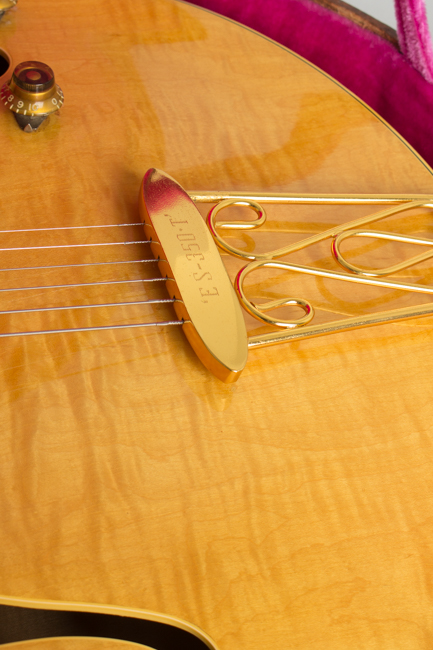 This guitar is a truly beautiful example of the fairly rare natural finish version of one of the Gibson company's classiest 1950's thinline electrics, the ES-350T. This one was built in 1959, the year many consider the apex of the classic Kalamazoo era. With a heavily flamed maple top and gold hardware it is certainly a looker, and with two of the then-new PAF humbucking pickups it's no slouch in the sonic department either!

The ES-350T was introduced in 1955 as a "modernized" version of the ES-350 electric archtop, a 17" full-depth guitar which had been in production since the late 1940s. The inspiration for the new model lay with two of the company's Nashville endorsers, Hank Garland and Billy Byrd. They suggested that the standard 17" archtop guitar body could be made thinner at the rim and thus be more comfortable to play, especially standing up as was increasingly common. They also requested a thinner neck with a short 23 3/8 scale length, reportedly to enable guitarists with normal-sized fingers to play the extended chords used by jazz greats like Tal Farlow requiring long fingerboard stretches.

The model created for them was dubbed the Byrdland, and featured the same solid, carved-wood construction (flame maple and tight-grain spruce) as the L-5CES. Gibson then applied the same formula to the existing ES-350, resulting in the redesigned ES-350T with a thinner 2 1/4" rim and a short scale neck, built on a laminated maple body with midline ornamentation. The model was prototyped in mid-1955, but only a handful shipped before 1956.

Early in 1957 the ES-350T was one of the first guitars to be fitted with the brand new humbucking pickups, the now-legendary PAFs. The ES-350T was moderately high end instrument, listing originally at $410 in natural finish and was considered a relative sales success, at least at first. This particular guitar carries a factory order number suggesting a build date around mid 1959 and a serial number indicating shipment in July of that year. This year only 57 natural examples were shipped, as internal competition from the new semi-solid ES-335 series began to cut into the thinline market.

Still, the ES-350T is a classic Gibson creation, with some of the company's iconic touches. The 17" body and neck are built of laminated flame maple finished in gleaming natural lacquer. The body is triple-bound, the headstock single-bound with a "crown" inlay under the pearl Gibson logo. The bound rosewood fingerboard has Gibson's signature split parallelogram inlay.

All hardware is gold-plated and includes Kluson Deluxe tuners with keystone buttons and of course those PAFs. These original 1959 humbucking pickups have gone down in legend at least as some of the very best ever made, with a super touch-sensitive feel and splendid tone from clean sparkle to overdriven raunch. The 350T's slightly narrower neck means the pickups fitted are built with a tighter polepiece spread than the standard version, making them unsuitable for Les Paul recreations and thus less likely to be robbed from their original home!

This splendid and rare guitar is an excellent player and a superb example from Gibson's 1950s glory days. The ES-350TN has a sublime rock and roll pedigree as Chuck Berry's main squeeze at the height of his 1950s career. He had at least two but this guitar is a dead ringer for one he played well into the 1960's that can be seen on several LP covers, right down to the not-always-there rubber grommet on the switch. Beyond this association the ES-350T can handle anything from fluid jazz to country twang equally well. Still, if you clang out the intro to "Johnny B. Goode", it's just like ringin' a bell.

This guitar is in exceptionally clean condition for its 60+ years on the planet, showing only very minor signs of play. The finish has some very light checking and overall only some very small wear spots. The only exception is a somewhat inexplicable spot of scratched-through finish on the slope of the heel, with some strap wear on its lower edge. There are some tiny chips off the back edge of the headstock. The gold plating shows its age in some places, mostly typical loss on the pickup covers and some areas of the bridge.

The keystone buttons on the Kluson Deluxe tuners are exact reproductions; 1959-era buttons are well-known for shrinking and crumbling and most have had to be replaced by now. The only other alteration on this guitar is a strap button added to the heel. The frets have only some very light wear in the lower positions. This is simply a stunner, one beautiful piece of PAF era Gibson greatness still housed in its original brown HSC. Excellent + Condition.
×