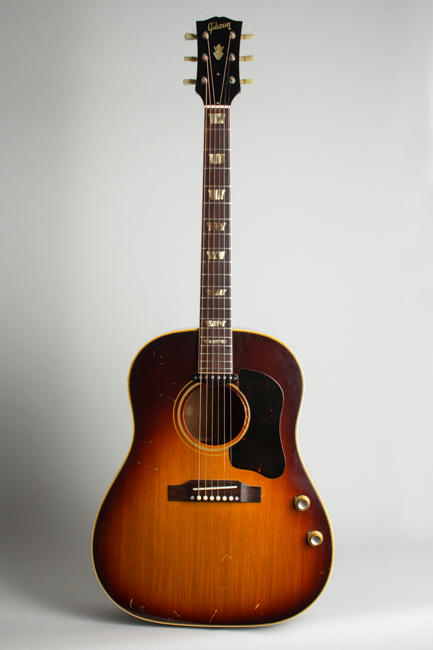 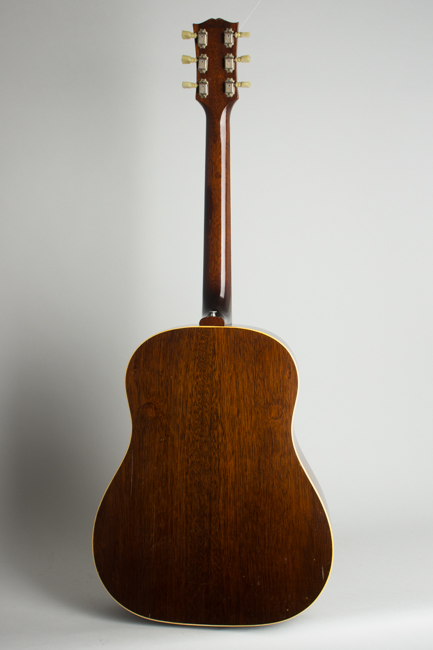 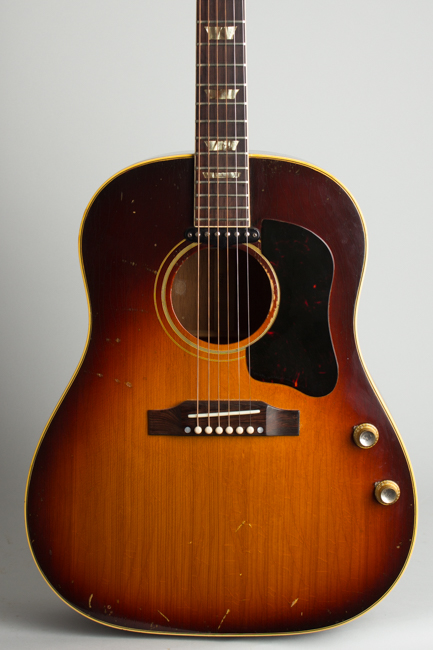 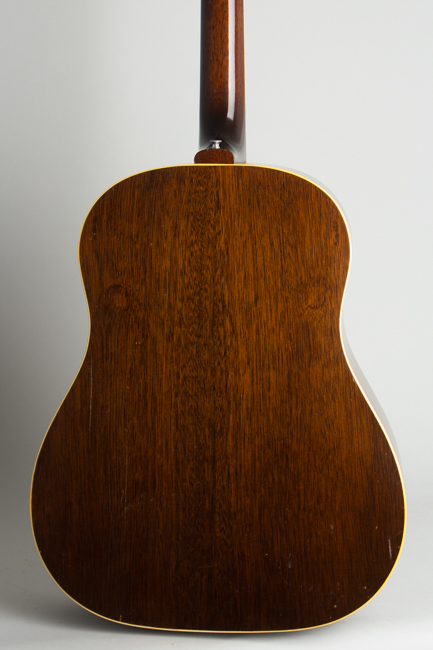 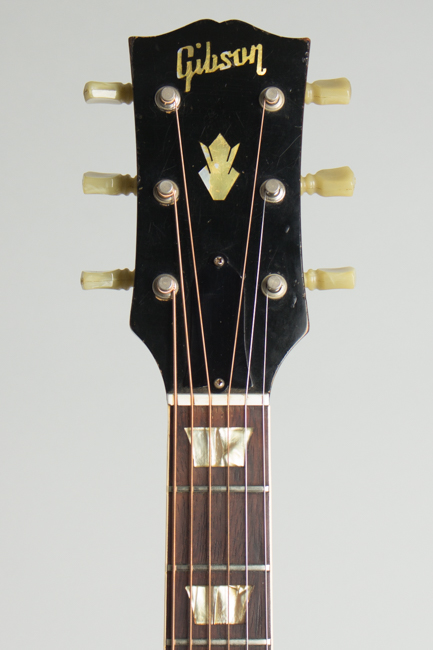 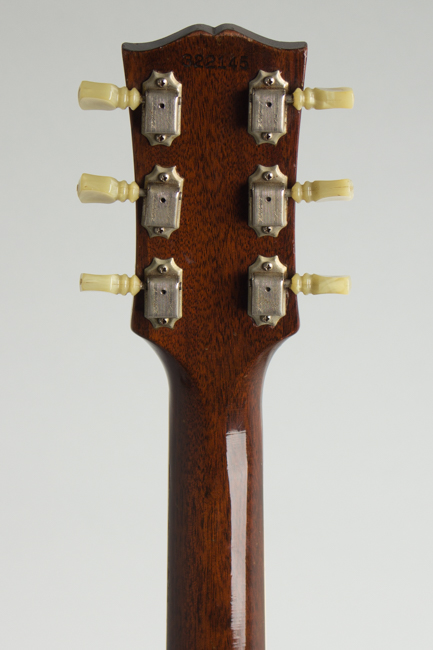 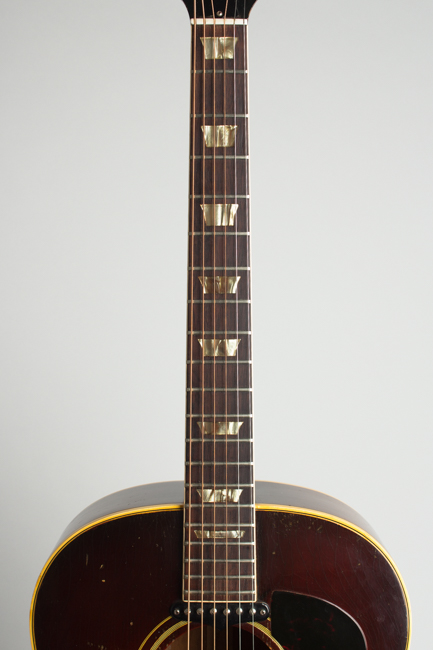 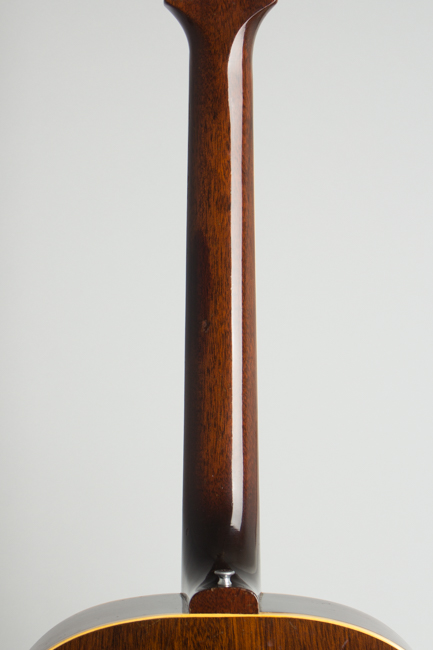 Gibson's J-160E electrified flat-top was a fairly successful guitar in its time, but is remembered primarily as one of the iconic "Beatle guitars" of the 1960s. John Lennon and George Harrison both used 1962 J-160Es as recording and touring instruments extensively during the band's early '60s breakthrough period, and this particular Gibson model remains indelibly linked to the Beatles' legacy both visually and sonically.

This 1965 guitar is quite similar to John's second J-160E, which he acquired in summer 1964 after his first one was stolen during the Beatles' Christmas shows in December '63. It shares structural and cosmetic features with Lennon's 1964 model including capped amber bonnet knobs and a double soundhole ring pattern, which differs from the 1962 examples the group originally purchased. The neck width is still the earlier 1 11/16" at the nut, which by the end of this year would be slimmed to 1 5/8" which many feel lost the classic Gibson feel. The neck on this one is actually fairly thin and flat-profiled back-to-front, not unlike the typical Gibson 1960-61 feel.

Originally this guitar had an adjustable bridge with a ceramic saddle; that has been replaced with a solid Gibson-style belly-up bridge which is generally considered a sonic improvement. Other than this alteration this guitar is essentially the same as the one Lennon used (along with the band's other, earlier J-160, which by that point was technically Harrison's) on all of the Beatles' recordings from the "Beatles for Sale" LP through the end of the group, and also during his early solo career, by which point the top had been stripped to natural.

The J-160E was originally of the more specialized Gibsons of the 1950s. Designed specifically for country/Western performers getting drowned out by their increasingly well-amplified bands, the fairly fancy 16" Jumbo sported the same electronics (a specially adapted P-90 pickup) and cosmetic features as the earlier small-body CF-100E. Unlike that guitar (and all other period Gibson flat-tops), the J-160E features a laminated spruce top with a ladder-braced design, Gibson's engineers having found that decreasing the top resonance helped reduce feedback when the guitar was amplified.

The J-160 is functional both as an acoustic and electric instrument. Purely as acoustic guitar, the sound is somewhat thinner than most other Gibson flat-tops with a pronounced midrange emphasis; the sound is distinctive and easily recognized on many Beatles recordings. As an electric guitar, the tone is full if not particularly versatile; quite a few of the Beatles records feature this sound as well. Oddly enough the model did not seem to get the big sales lift some other "Beatle Guitars" enjoyed; only 229 were shipped in 1965 making this a relatively rare instrument. While this particular J-160E is not an exact Beatles-year guitar (it's close!) it is functionally the same, and a fine-playing and sounding example of the model.

This mostly original J-160E shows some average wear, but is generally well preserved with no major finish loss. The lacquer overall has typical Gibson checking, and shows dings, dents and scrapes including some scratches to the top and belt buckle wear into but not through the finish on the back. There is a patch of wear through the finish on the lower edge of the soundhole just above the pickguard. The back of the neck is quite clean except for one feel-able dent behind the 7th fret.

The top is very solid but has some minor arching behind the bridge, which is almost inevitable with this ladder braced model. There are two fairly minor repaired grain splits to the mahogany back. The original adjustable-saddle bridge has been replaced with a nice replica of the typical Gibson "belly up" solid-saddle rosewood bridge, which gives somewhat more body to the acoustic sound at least. The original rosewood bridge and saddle are preserved in the case pocket. Other than this alteration and a correct period Gibson strap button added at the heel the guitar remains original.

The original frets show hardly any wear and this guitar is a very good player both acoustically and when plugged in. It offers the typical J-160 sound; crisp and somewhat dry with a pronounced midrange, with in this case a bit more depth likely due to the superior bridge construction. One of the iconic 1960's instruments from the "Beat Boom" and beyond, this remains THE guitar with "Rubber Soul"! Includes a modern molded HSC. Excellent - Condition.
×