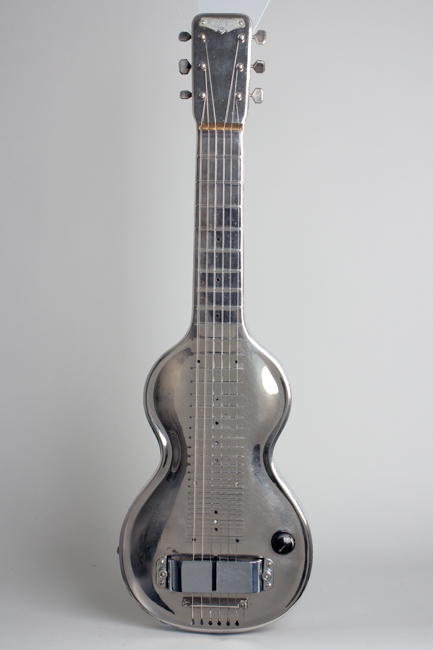 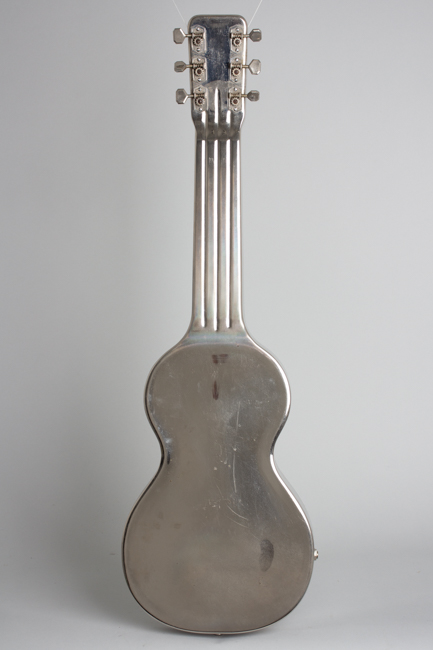 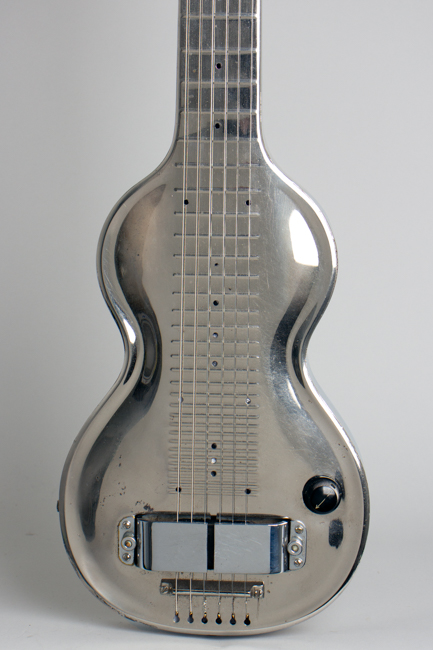 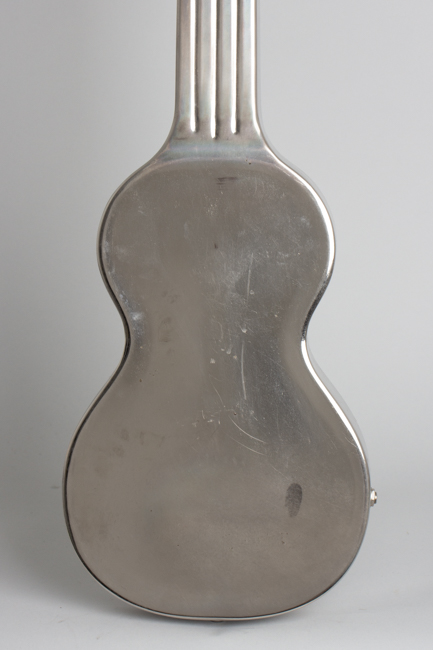 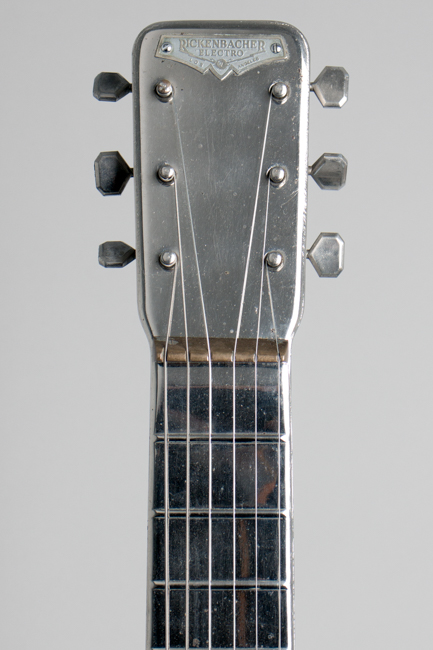 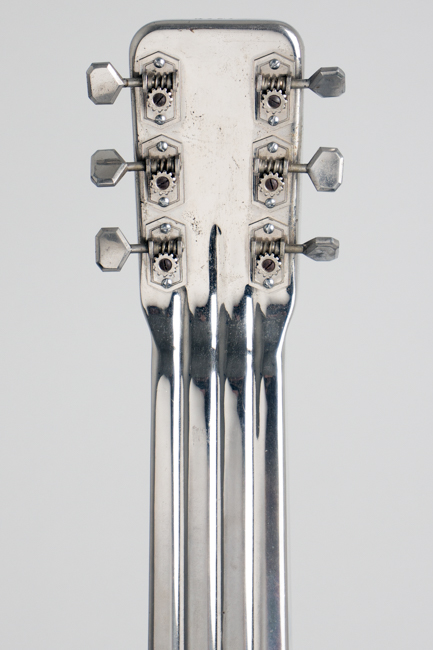 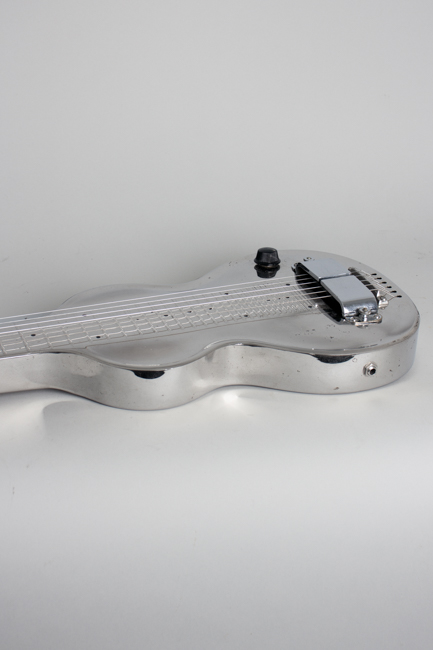 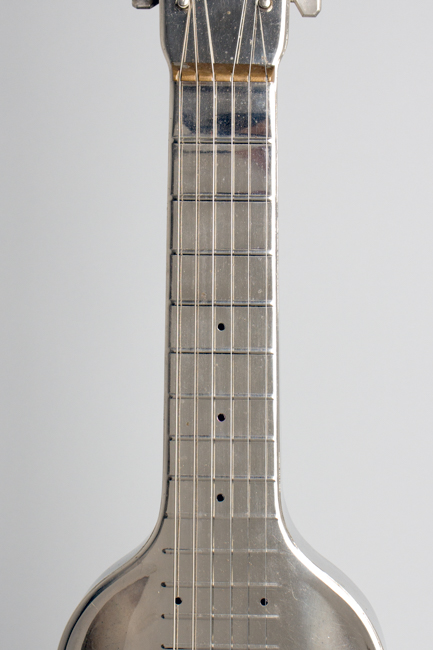 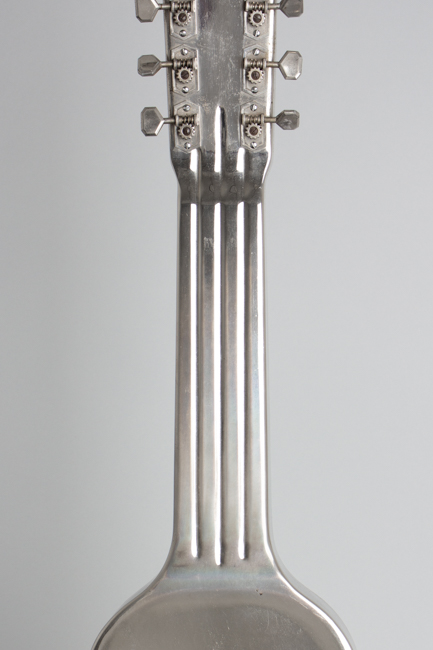 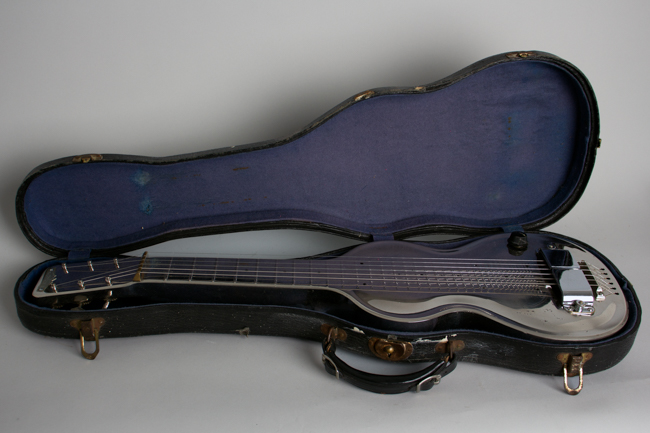 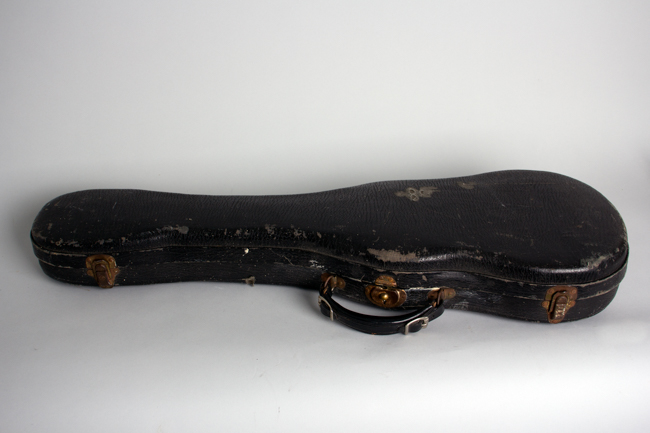 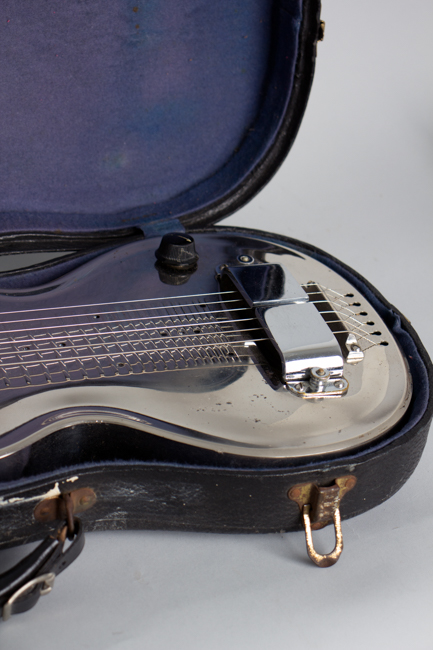 This is a lovely and fairly early example of the Rickenbacker Silver Hawaiian Steel Guitar, one of the company's most striking 1930s classics. The entire instrument is nickel-plated metal, with a stamped hollow body making it much lighter than the earlier Bakelite guitars. The 1 1/2" pre-war horseshoe pickup's mounting flange is marked "Pat. Pend" as in mid-1937 the long-awaited patent was not yet approved; it finally came through in August that year! This unit is still considered one of the best-sounding pickups ever produced and gives these pre-war Rickenbackers their classic sound.

This guitar's serial number D-187 marks it as one of the first couple of hundred Silver Hawaiians built in early/mid 1937. It has a single volume control on the bass side with the original arrow-top black Bakelite knob; the next year a tone control was added as well. It also has the early style solid plated brass bridge and nut; later examples substituted molded plastic for these which knocked a bit of top-end brilliance off the tone. The metal headstock logo plate reads "Rickenbacher Electro" Los Angeles with lightning bolts surrounding an "RE" emblem.

The Silver Hawaiian was the next model Rickenbacker designed after the Bakelite Model B, coming into production about two years later in 1937. Besides being lighter the stamped metal body was less expensive to build, resulting in a retail price 30-40% lower. The hollow body gives a more "reverb-y" sound than the earlier solid instruments, with a slightly more acoustic character. The plated metal affords a very flashy appearance, reminiscent of the earlier National Silver Guitars that these primal lap steels had largely replaced by 1937. Rickenbacker's original catalog description states "...delights the eye with its flashing beauty", and indeed this is a most striking-looking and fine-sounding prewar steel.

This striking silver guitar is nicely original and relatively clean overall, showing some fairly light general wear. It even has its full set of original tuners, something many are missing as the sintered metal buttons are very prone to crumbling. The other hardware is also original including the all-important pickup and wiring at the heart of the guitar; it does appear just the jack may have been replaced.

Other than that minor substitution the instrument shows only some minor general wear. The plated finish has scuffing overall and some spots of corrosion but for the most part still shines like bumpers on a 1955 Cadillac. The area where a player's picking hand rests on the top is a bit dulled down with some small corrosion spots, but this is not too serious. Nearly all the plating has flaked off the original brass nut, the bridge has not lost any. The original shaped hard case has some external wear, but is still fully functional. This is a player's delight in a prewar Hawaiian steel, still great looking with the expected spectacular sound. Overall Excellent - Condition.
×