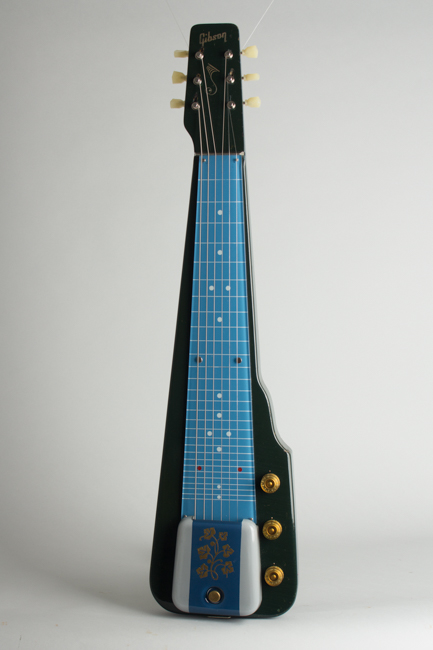 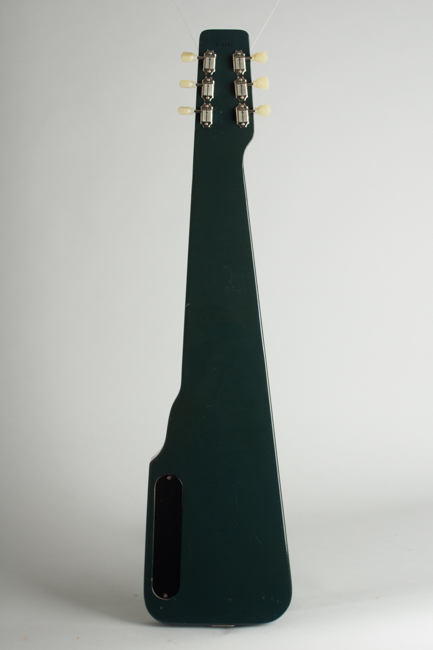 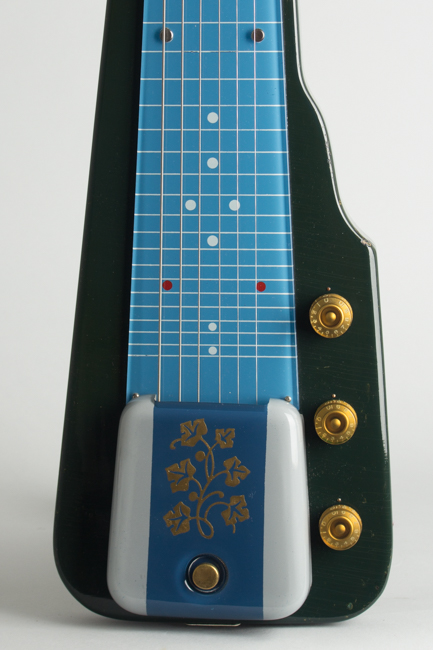 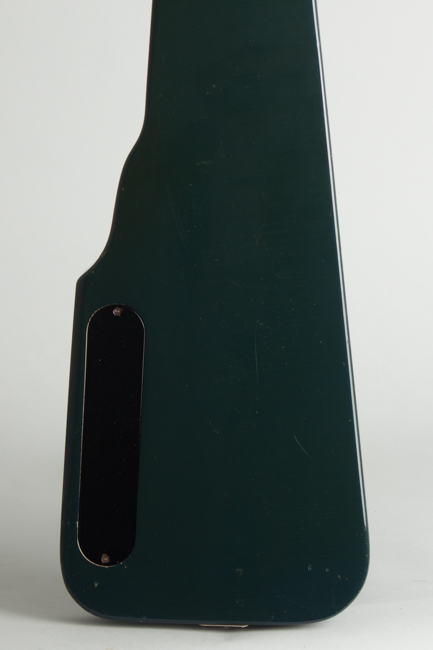 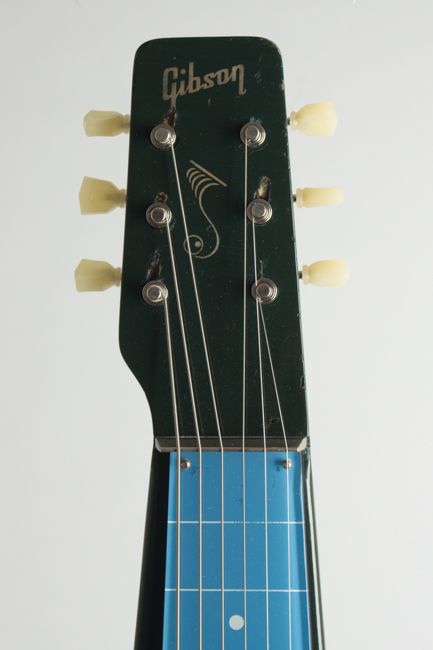 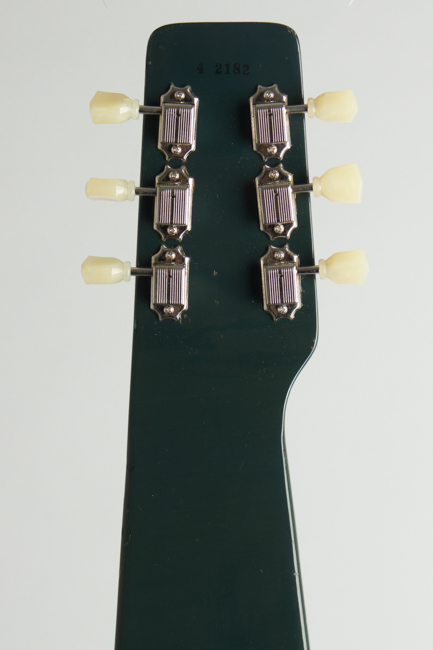 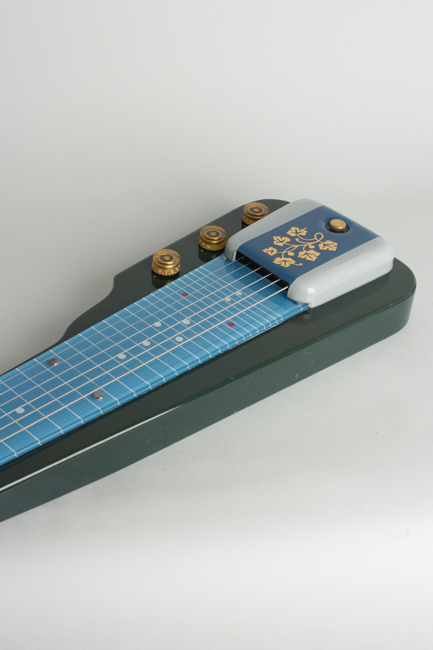 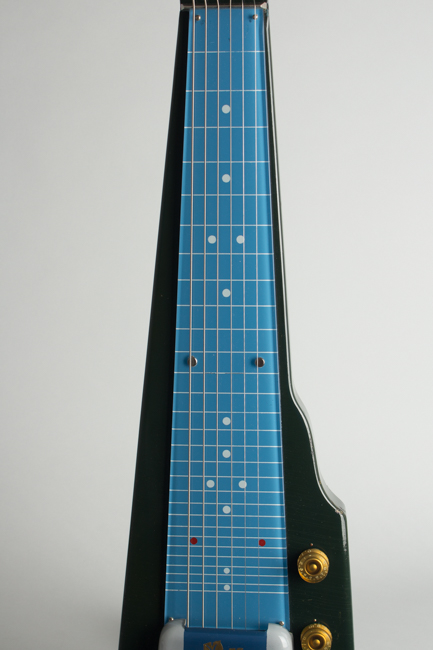 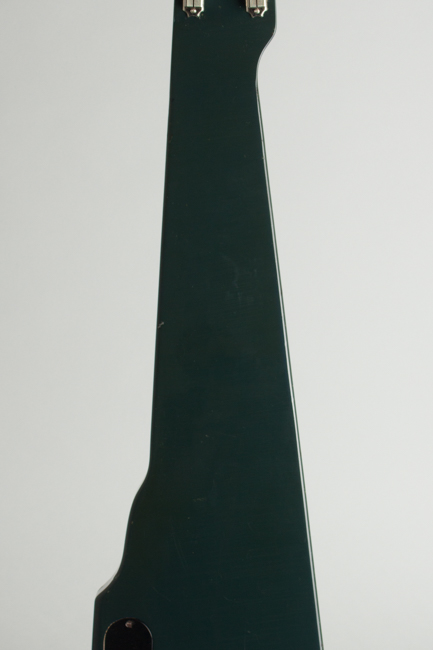 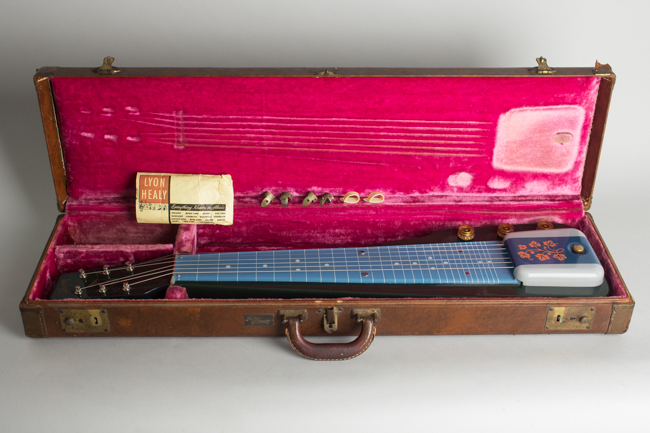 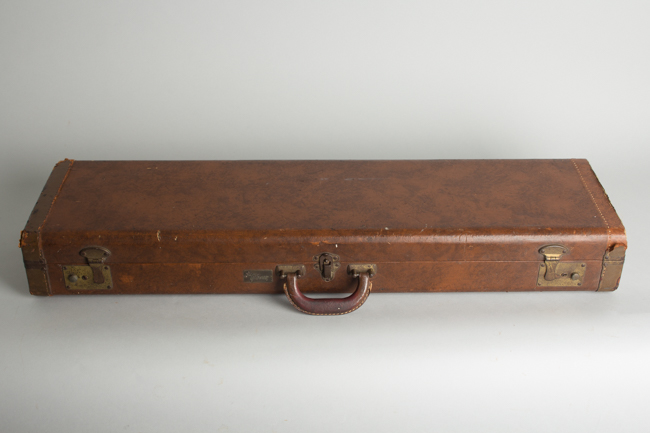 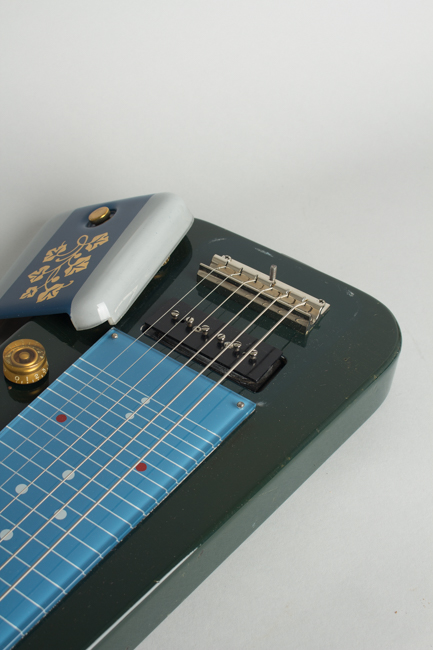 Starting in the late 1940s, the BR-2 Century was one of Gibson's all-time strikingly modernistic creations; a truly unique concept in playable art. This lovely royal blue Populuxe delight from 1954 was the second iteration of that whimsical concept, launched in 1951. The Century lap steel was positioned as a midline-priced piece of futuristic design, a bit less deluxe than its upscale sister the Ultratone but featuring a similar oblong asymmetrical body and back-painted Lucite fingerboard.

The instrument's visual character was originally the work of the design firm Barnes & Reinicke, hired by Gibson at the end of WWII to add some new flavor to the company's recipe -- and boy, did they! This fairly short-lived version of the model features a deep blue/green lacquer finish on the body, set off with lighter blue, grey, and gold accents. The one-piece metal bridge is covered by molded, back-painted shell -- no unsightly electronics here!

The familiar Gibson P-90 single coil pickup with adjustable polepieces sits under a blue-grey plastic cover with a gold floral design unique to this model. This always great-sounding unit provides the tonal muscle to back up the Century's slickly moderne looks. It is controlled by an unusual one-volume, dual-tone-knob circuit for an added range of sound, although the second tone control has a very subtle effect. This 1954 model has the numbered amber "hatbox" plastic knobs typical of the period.

The 1950s-era Century was produced in relatively small numbers (all of 143 shipped out this year), but remains one of Gibson's most unique and visually striking instruments. This one comes in its very fine original rectangular hard case which is the little brother to other Gibson cases of the era, covered in brown with a pink plush lining.

This is a clean example of this Populuxe classic overall, showing for the most part only some fairly minor wear. The original blue/green lacquer finish retains great color with some small chips and dings but no heavy play wear. The instrument is mostly original; the tuner are repro Klusons with keystone buttons. Unfortunately someone had changed the tuners out earlier, and done a fairly sloppy job of it, resulting in several noticeable chips to the headstock face above the shafts. These have been touched up somewhat but remain quite visible; really the only real blight on this superbly striking instrument's cosmetic appeal. All three pots were replaced around 1980, but the original caps and knobs are still intact and everything works as intended.

This Century is still a fine-playing and sounding steel, with the typical warmer Gibson tone compared to contemporary Fender or Rickenbacker instruments. After nearly 70 years these Century and Ultratone models are still unique and in any musical gathering the most futuristic thing in the room! The original pink-lined brown case has some external wear and has lost part of one leather end, but is fully intact and has some old fingerpicks in the pocket contained in a super cool old Lyon & Healy store envelope. Overall Very Good + Condition.
×