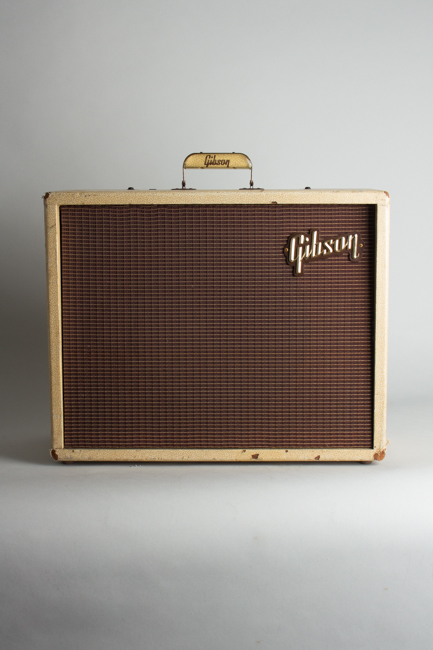 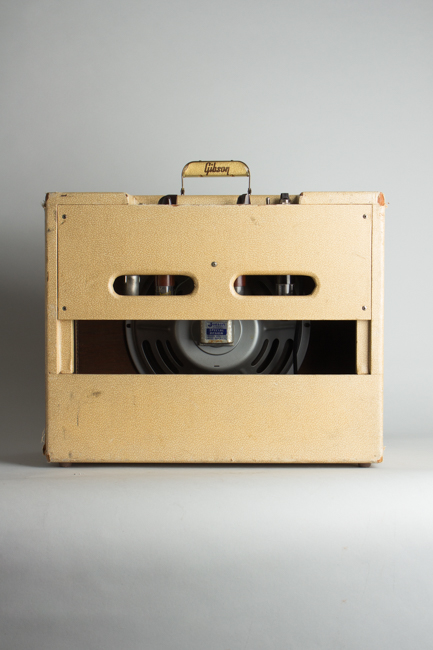 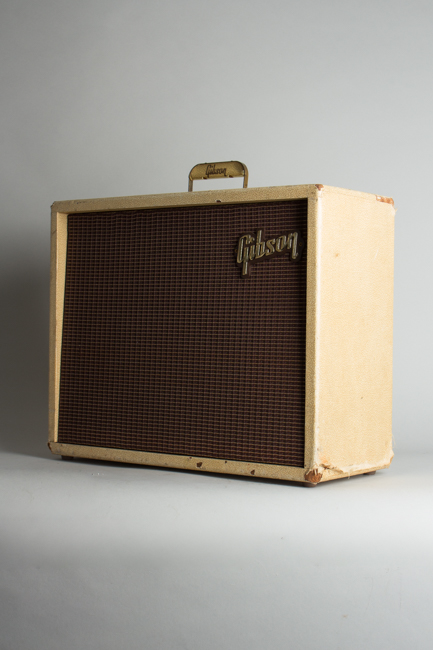 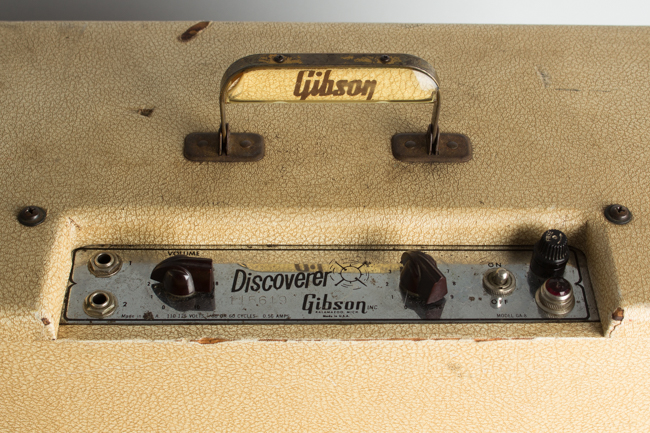 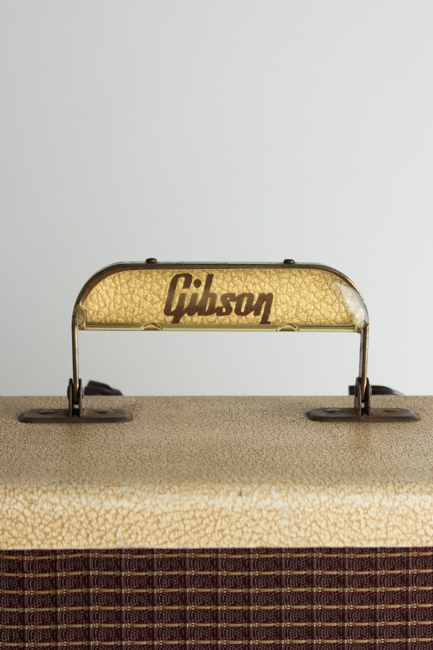 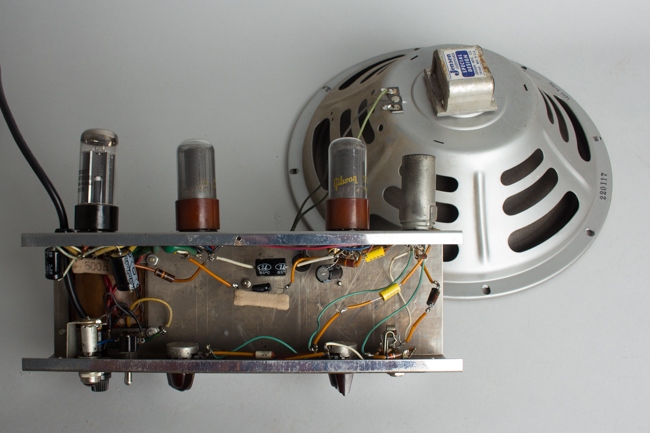 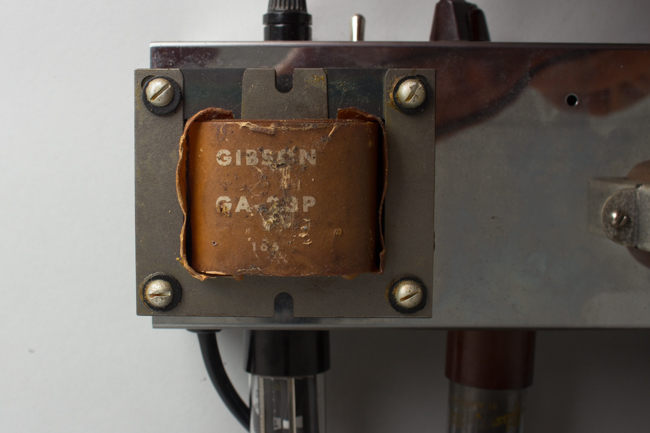 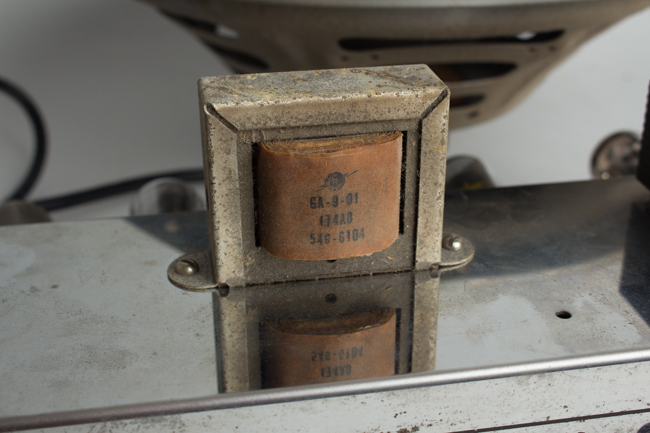 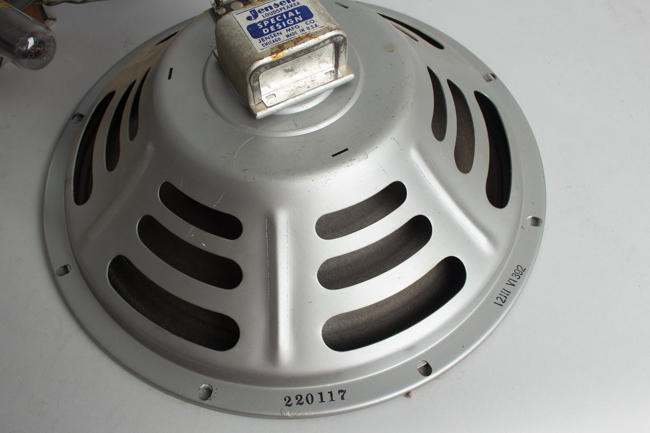 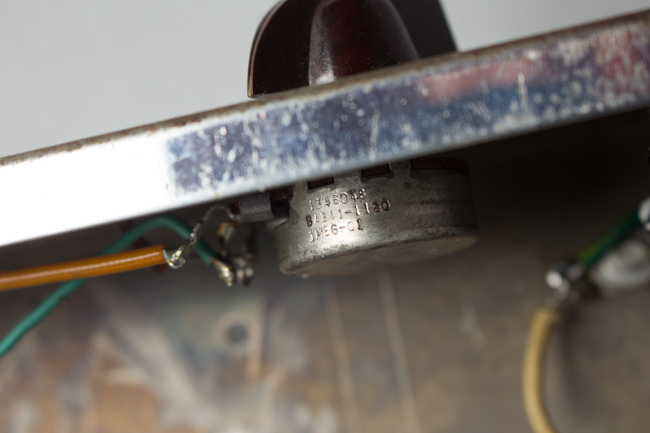 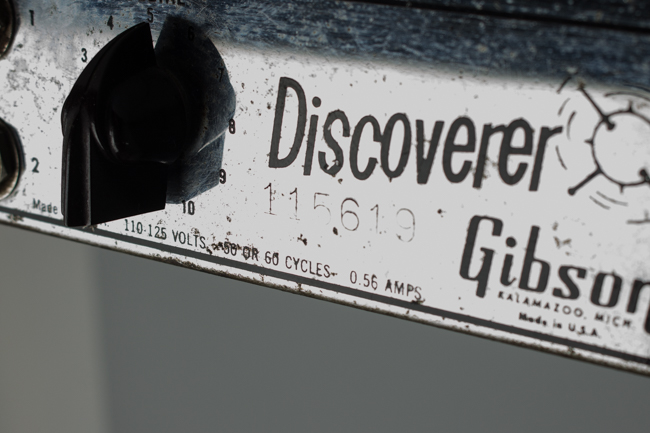 This funky little Gibson amp from the dawn of the 1960s is a fairly simple design but one of the company's best and most interesting period offerings. It is labeled "Discoverer", a name introduced in 1960; it was the space age after all! There is even a little rendering of the Discoverer satellite on the faceplate. While still using the older 1950s GA-8 model designation, it is actually a new design for the new decade. It is a fairly compact 10 watt combo with more kick than many similar small amps.

The cabinet is covered in textured cream Tolex, an unusual feature for this model. The faceplate has two inputs and controls for volume and tone. The amp puts out about 10 watts with a great breakup curve. Even the handle is extra cool, with a clear plastic center featuring an embedded "Gibson" logo. This was fairly successful for Gibson with 967 shipped in 1961; they seem fairly rare now however, as the model was not in production for that long.

This example was likely made in mid-1961. It mounts an original Jensen 10" speaker coded 220 117 (17th week of 1961) and pots from the 48th week of 1960. The original transformers are coded GA-23P 165 (power) and 549-6104 (output). It is a parallel single ended design -- a rare output tube configuration, unique to these early non-tremolo GA-8s. Electrically this is not unlike having two single ended Fender Champ power sections in parallel. This results in a rich and thick overdrive unlike any other low-wattage amp we've heard!

Overall this amp shows some general wear and tear but no heavy abuse or alterations. The light-colored Tolex is a bit dirty and has some tears and worn-through spots on the edges and corners, a couple of "classic" cigarette burns, and one deep dent on the top. There is some scuffing and dulling to the nickel plating and stenciling on the faceplate. The fragile raised plastic Gibson nameplate on the grille is completely intact.

Recent service consisted of a typical light cap job with Electrolytics replaced, pots, jacks and sockets cleaned, a three prong grounded power cable installed, and a Bias to spec. The interior remains otherwise original. The Jensen speaker still has the original cone and sounds good. This is a really cool sounding little amp and still something of an unsung classic, with a lot of tone in its 10 watts! This amp may have been some interesting places in its day as it came from a pawnshop in Chicago. Overall Very Good + Condition.
×