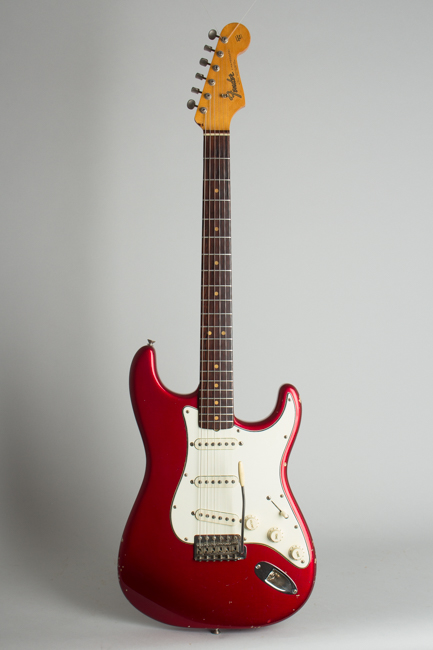 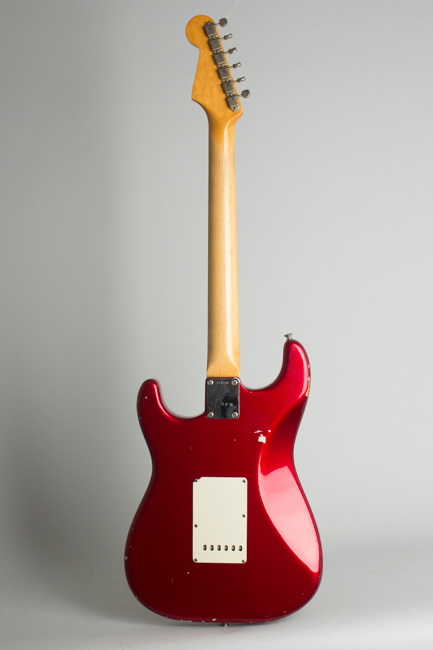 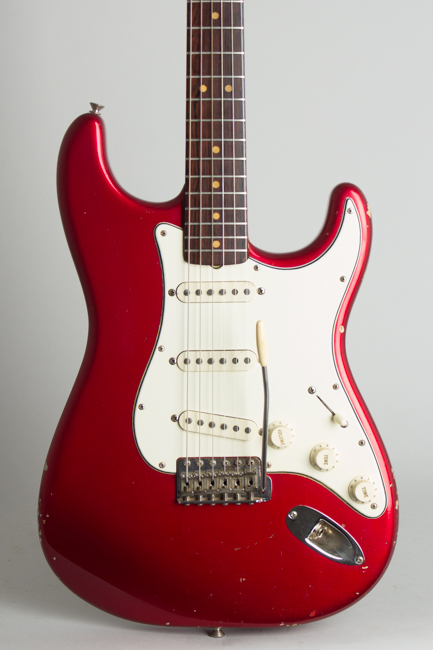 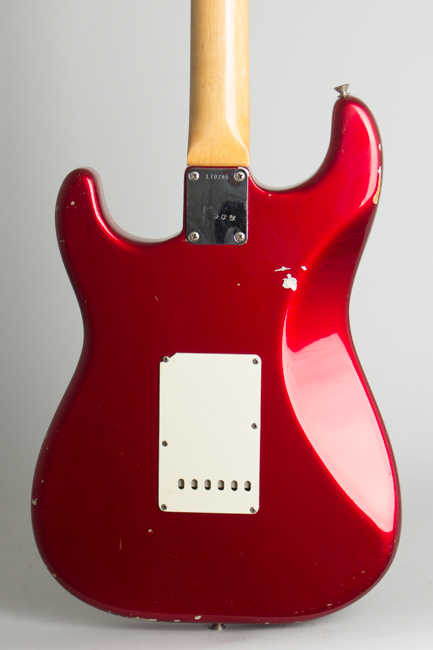 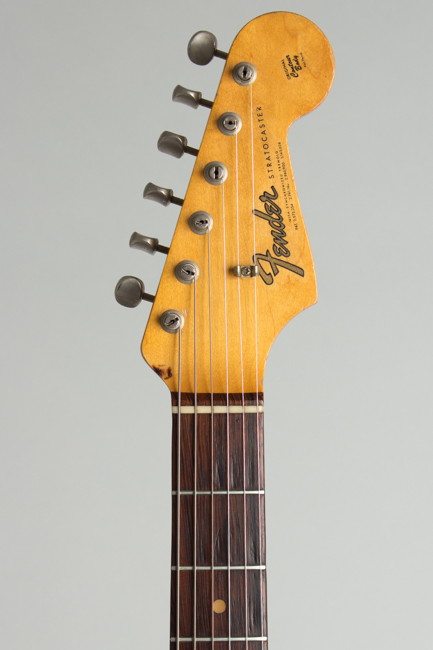 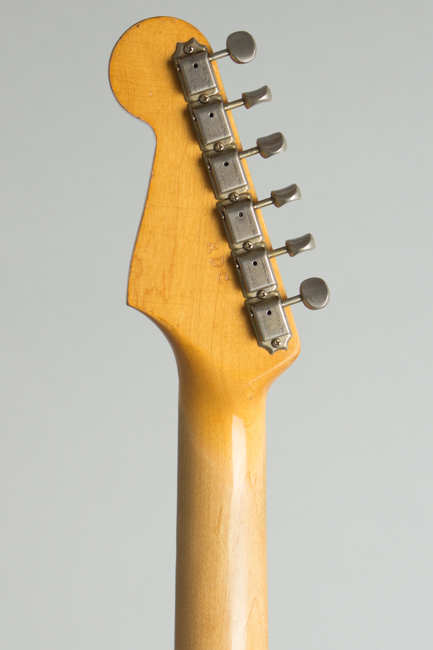 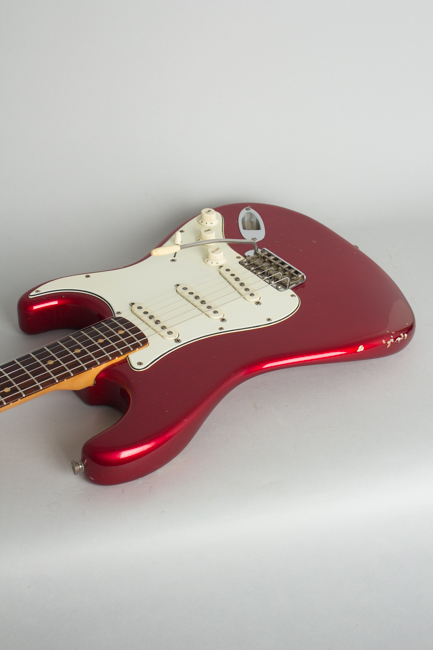 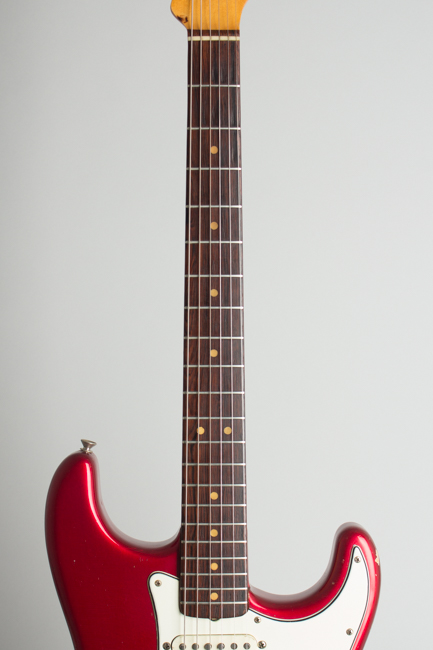 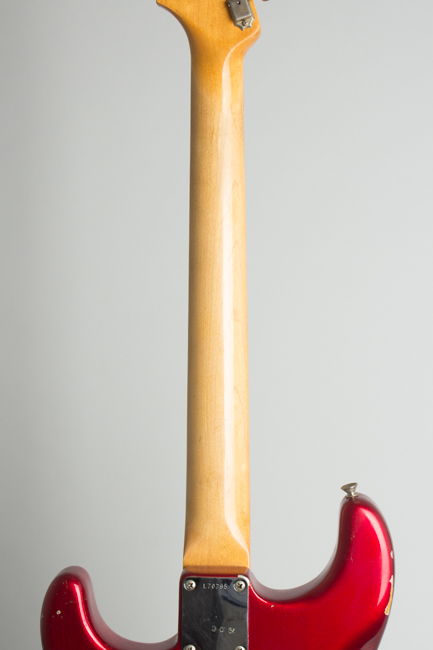 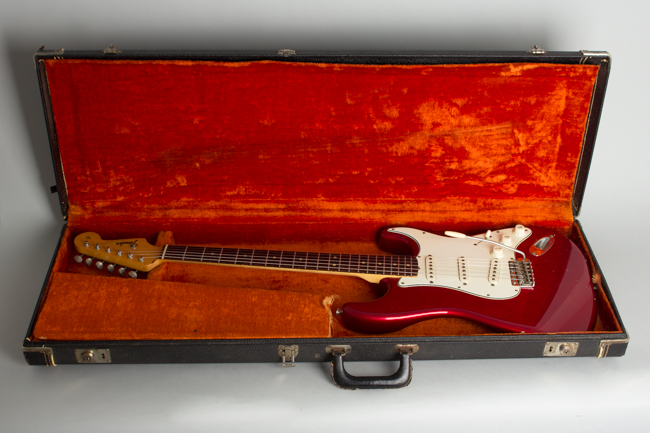 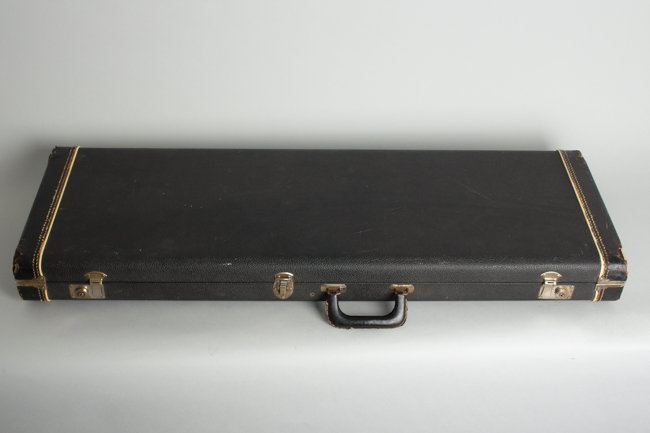 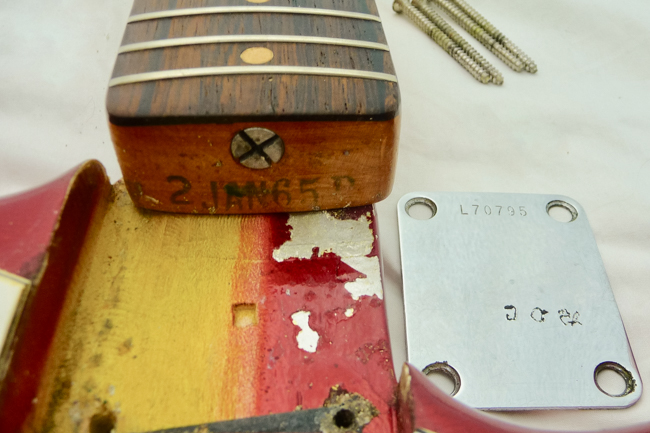 This very early CBS-era Fender Stratocaster represents an absolutely classic variant of the model, with the body finished in the custom Candy Apple Red lacquer. The neck is date stamped January 1965; The ink was hardly dry on the 13 Million dollar CBS check when it was fabricated. This early into CBS corporation's ownership of the Fender company the actual instruments are essentially the same as their 1964 predecessors despite some minor production changes that were happening even before the sale.

This guitar shows a mix of typical features for early/mid-1965, with just some minimal differences from 1964 and earlier models. The neckplate carries an "L" number, in the middle of the series that straddles this divide. The dots in the thin-lam rosewood fingerboard are still the "clay" material used since 1959, shortly to be replaced with pearloid. These are generally considered the mark of a Pre-CBS guitar, although the transition overlaps the actual January 1965 date. We have seen December '64 necks with pearloid dots!

The original pickguard on this guitar is made of white ABS plastic instead of the earlier greenish nitrate material, another transitional change specific to this moment in Fender time. The "green guards" typically disappear at the end of 1964, so this is as expected. The small-pattern headstock on the maple neck sports the gold "transition" logo that had replaced the older '50s-style decal in 1964.

The pickups are a nicely matched grey-bobbin set clear dated 2-19-65 on the middle one. The masking tape on the leads and the internal solder joints are intact. There is an original "OK" inspector's mark under the pickguard. The three pots are a matched set dated to the 5th week of 1965; in fact all the parts are closely date-matched on this guitar which shows how fast Fender was putting Stratocasters together this year, the height of the guitar boom.

Somebody ordered this Stratocaster in the flashy Candy Apple Red custom finish in late '64 or early '65. It must have been a prized possession, as there are initials and a social security number discreetly etched in several strategic spots to help deter theft. It is lighter than many at 7.71 LBs, and has been played but not abused in the many decades since remaining a choice piece of shiny red Fender greatness.

This guitar remains relatively clean and nicely original with a couple of reversible parts substitutions done for practicality's sake. The original 3-ply white ABS pickguard is included but not currently mounted on the guitar. It shows some light shrinkage with a crack through the typical weak spot above the neck pickup and the corner has popped off on the lower body horn at the screw hole. It also has the original owner's social security number neatly etched into the face just above the neck. The piece currently in use is an accurate reproduction; few folks would notice the difference without a fairly close inspection. Some of the bridge height adjustment screws are replaced as well; the somewhat rusted originals are included and again could be remounted if desired. Apart from these easily undone changes, this Strat is as it left Fullerton in 1965.

There is no overspray work to the finish which shows some typical play wear. Both neck and body remain original, with the correct silver undercoating to the metallic body paint for the period and the "paint stick" mark visible in the neck cavity area. The body finish shows some typical checking and numerous dings, chips and dents but overall is very well preserved, with great strong color showing minimal fade and virtually no yellowing. Other than a couple of chips near the lower edge the face is relatively free of finish loss.

The original owner etched his initials "RDC" into the back of the headstock below the A and D string tuners, and also into the serial number plate in smaller letters. Other than this the neck finish just shows just a few tiny mars and the typical smooth wearing down from playing, settling nicely into that much-loved "worn Fender" feel. There is one small "classic" cigarette burn on the headstock face. The gold Fender decal is a bit tarnished but in better shape than many '65s which sometimes darken dramatically or even flake. A factory shim is still in place in the neck pocket.

Except as noted above, all parts are original including all hardware, pickups, and wiring. The ground connections to the volume pot are a bit sloppy but do not appear to have ever been disturbed; as can be seen, this wiring work passed inspection on a likely very busy assembly line in early 1965! The original plastic trem spring cover is included; it also has the social security number delicately etched into it, an errant spot of what appears to be old glue on the back and one corner is chipped off.

There is some corrosion on the bridge plate and saddles as is typical for an instrument of this age. The original frets have been crowned down somewhat, but the guitar remains very playable. The sound is excellent, meatier than some '65s but with plenty of sparkle on top. The instrument is still housed in its original black Tolex Fender hard shell case, which shows some typical wear but remains fully functional. This is a lovely example of an early-CBS period Stratocaster, showing some minor personalizations but still a stunner resplendent in one of the classic and most eternally popular custom finishes. Overall Excellent - Condition.
×