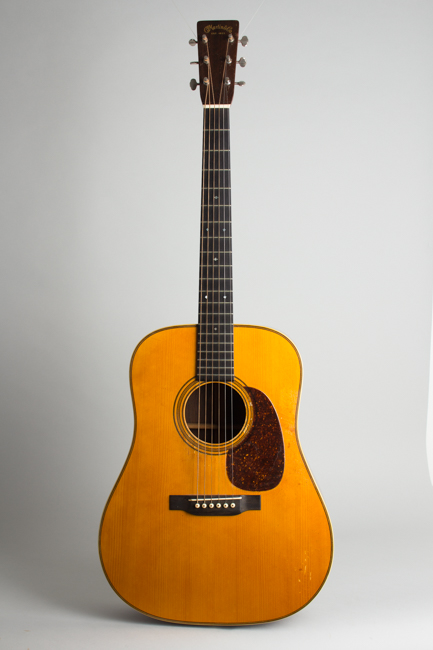 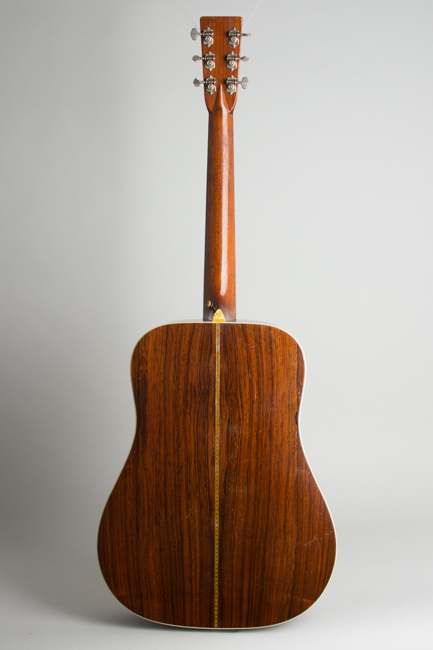 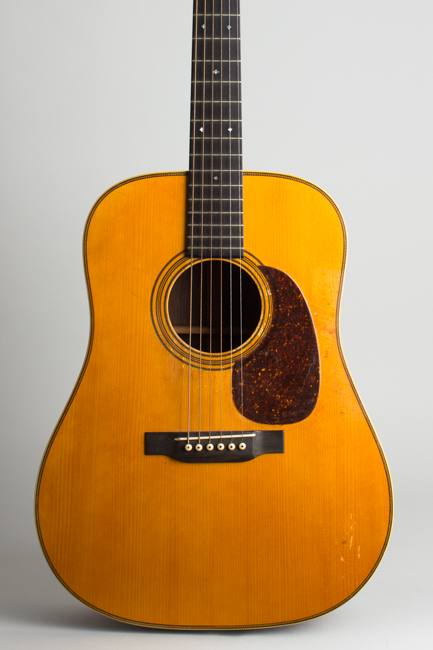 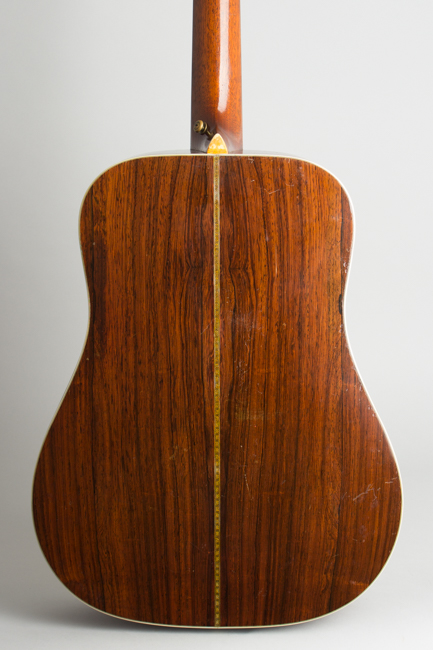 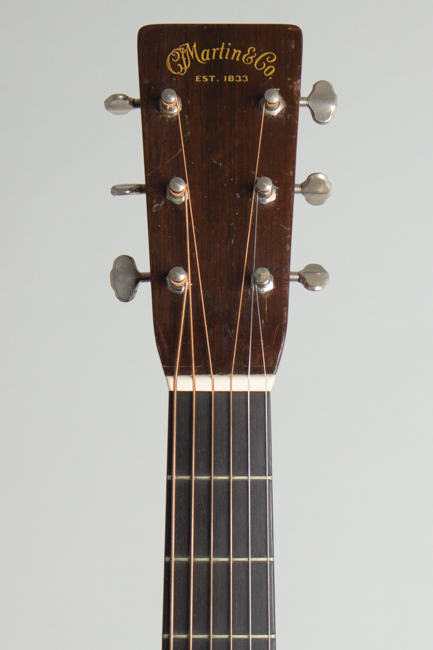 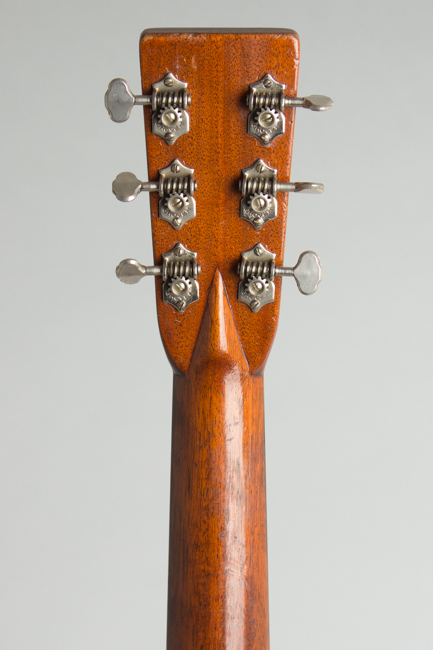 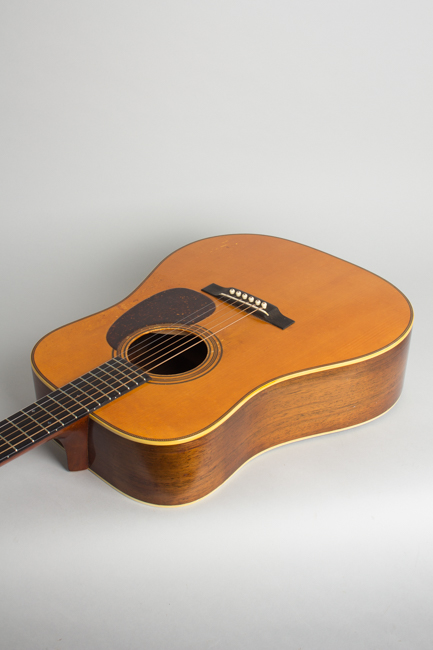 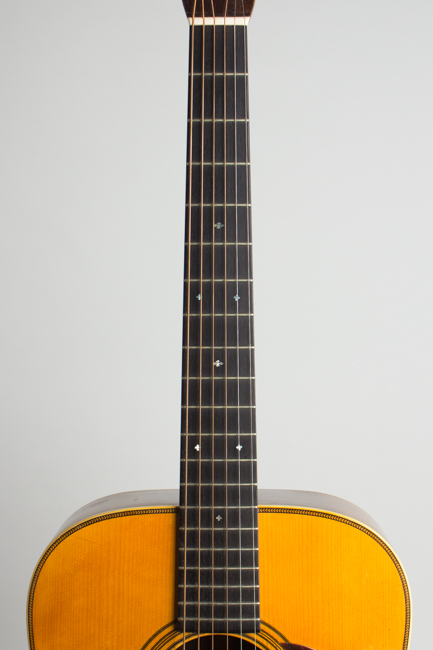 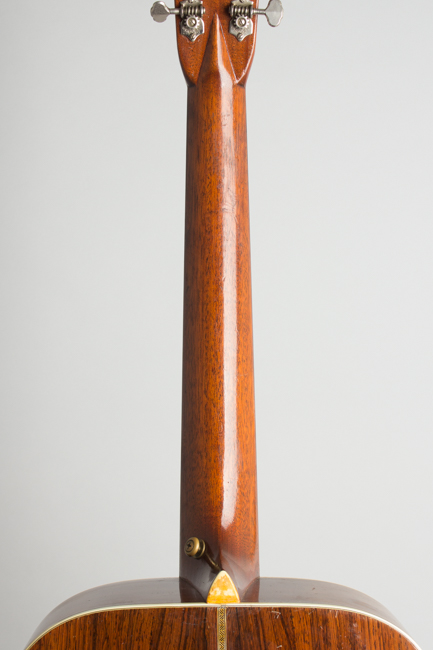 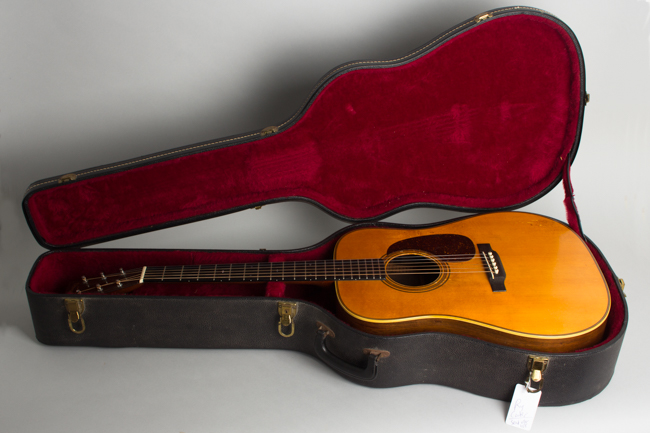 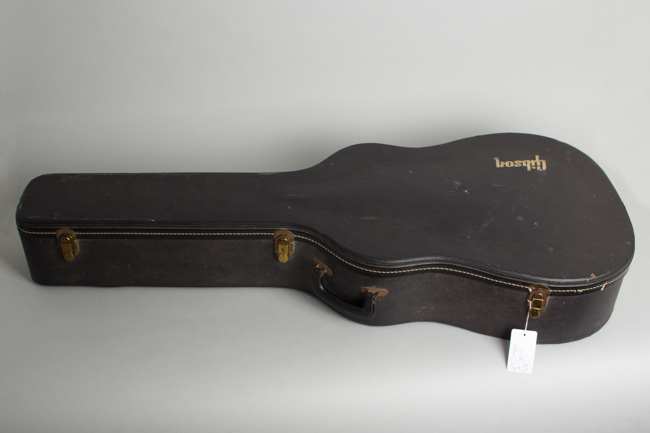 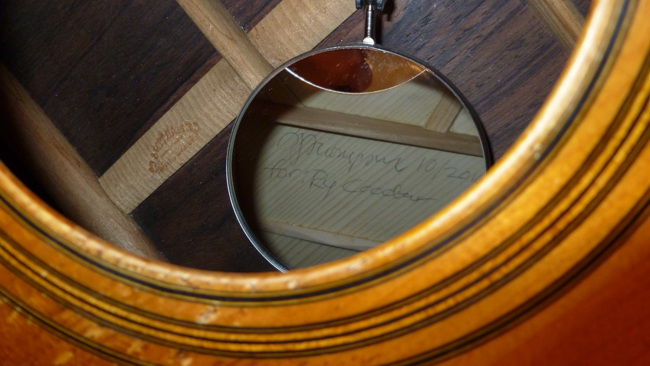 Guitars can be special for many reasons; what they are, who built them, where they have been, and/or a special player that may have owned and used the instrument. This Martin encompasses all of these factors. It even has a name: "Boris," bestowed by former owner Ry Cooder to reflect its slightly Frankensteinian character. The instrument's serial number indicates it began life as a 1935 Martin D-28, one of a only 81 sold that year, and one of the first 100 14-fret D-28s ever built. The top and back were then replaced sometime in the 1950s at the Martin factory. In more recent times, renowned luthier T.J. Thompson fit it with the neck from another period Martin D-28, and later replaced the 1950s Martin top with one of his own pre-war style re-creations. Like Boris Karloff's famous monster of Filmland, this guitar was assembled from a collection of superlative parts and now has a unique life of its own.

This D-28 shows all the classic features of the early models, widely imitated since. The back and sides are Brazilian rosewood, with the lovely even straight-grain figure Martin prized. The top is straight-grained Appalachian spruce, from T.J. Thompson's private stash of long-aged woods. It is bordered with the famous "herringbone" wood trim and bound on the outside with ivory celluloid. The top is signed "T.J. Thompson 10-2016 for: Ry Cooder" on the underside. The internal bracing is T.J.'s version of the classic prewar Martin scalloped "X" pattern.

The chunky-feeling mahogany neck has an unbound ebony fingerboard decorated with the period's discreet slotted diamond pearl inlay. The neck profile is round backed but with the slight hint of a "V" profile in the way the sides bear away from the center as it moves towards the nut. The tuners are 1950s Grover G-98 Sta-tites, possibly fitted when the guitar was first rebuilt at Martin.

Ry Cooder owned and played the instrument for some time, and told us this about it:

"Some years ago, T.J. Thompson offered me this guitar. His information was that it had started life in 1937, then the Martin factory had re-topped and re-backed it in the early '50s. Then T.J. had replaced the neck with a '35 for comfort. I called it 'Boris'. Over time, the bridge came up and there was some damage to the top, so I asked T.J. to make a new top with one of his 100-year Adirondack boards. Make it *loud* for bluegrass, I said, which he did. It sounds big in the studio, bigger on stage. You bluegrass types will not have a problem, your G-run will have weight. And you finger-style aficionados will be sitting jake, it's got real quality high-end like T.J.'s work always does."

We couldn't say it better. There are guitars that are simply the standard by which others are judged -- the 1930s Martin D-28 "herringbone" is certainly one of them. Yes, this now-unique example is a composite of parts, but they are the finest components possible. If you want the sound...THE sound...this guitar has it in spades. And a pretty cool history too. If you are seeking the ultimate power and depth of a Dreadnought with the sweetness, sparkle, and singing character of the best pre-WWII Martins, this early D-28 is unmatched.

This guitar shows a decent amount of wear overall but is an exceptionally fine playing and sounding instrument. The finish has dings, dents, and scrapes and of course has several different generations of lacquer on different areas. The most recent is the top finish by T.J. Thompson which is very thin, and has a number of small worn spots, though whether these are the result of use or a subtle relicing we cannot say. There is some pickwear that can be directly attributed to the last owner. The internal workmanship on the top and scalloped braces is extremely fine, as would be expected with T.J.'s work.

The bridge is a perfect replica of an early Martin long-saddle ebony piece and the pickguard appears to be an original old celluloid Martin guard. There is a small neatly patched area to the rosewood headstock veneer just above the nut, the cause of which is lost to history. The area by the endpin has several old filled screw holes...there was a tailpiece mounted there long ago. There are no apparent cracks except for one area on the upper treble bout side along the kerfing line where there appears to have been a small split in the rosewood along a longer grain line.

The fingerboard has been expertly refretted with smaller wire typical of the original period. A strap button has been added at the side of the heel, and the endpin area was filled in and a screw-in plastic strap button added. Really the numerous small details of this guitar add up to one thing: a fantastic sounding player's instrument with not only the Martin name and history behind it, but the personalities of the man who rebuilt it and the singular musician it was customized for. "Boris" is housed in an old early '70s Gibson Dreadnought case with a dealer tag that says "Ry Cooder send after 11/8", probably referring to another guitar. Very Good + Condition.
×