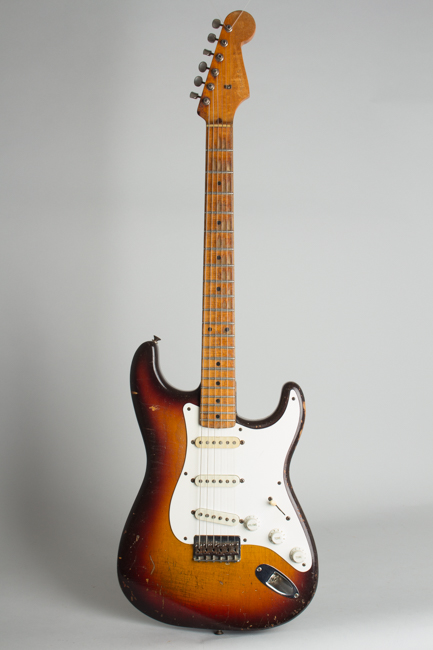 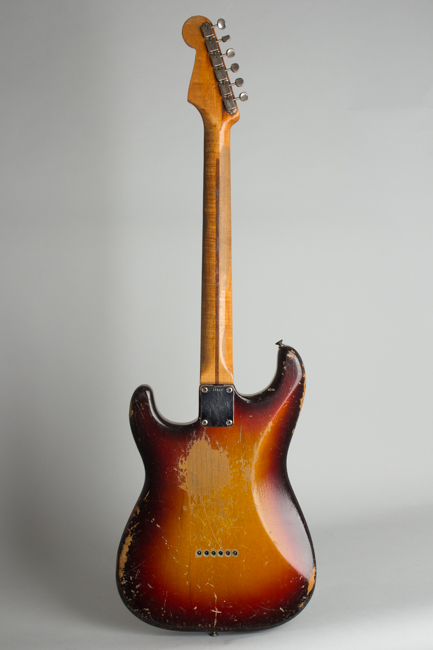 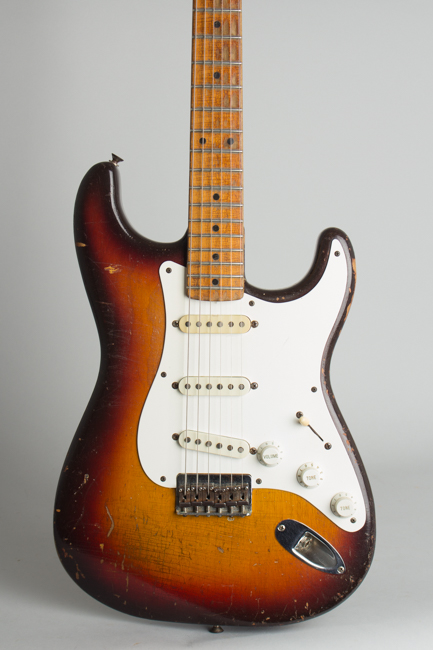 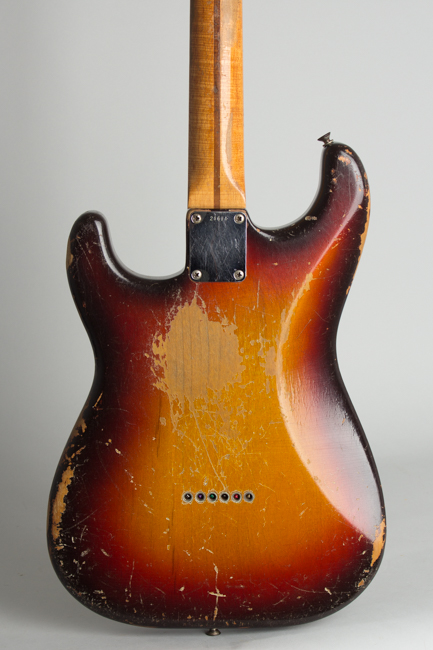 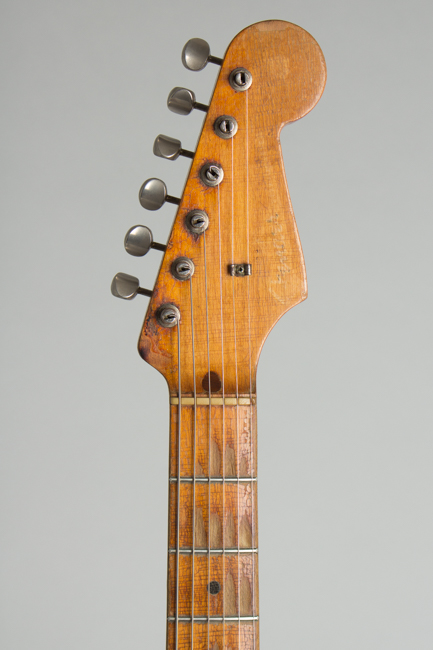 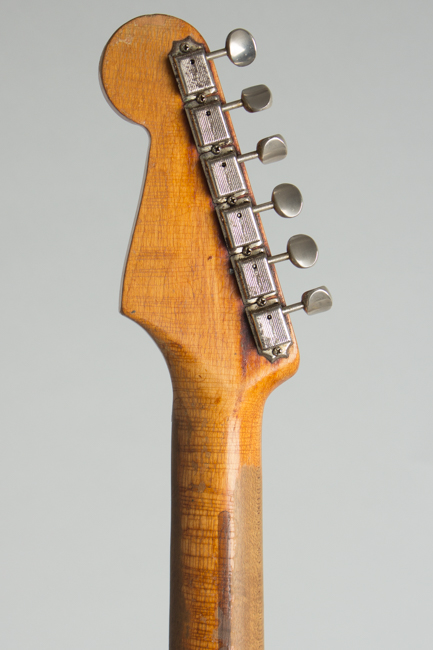 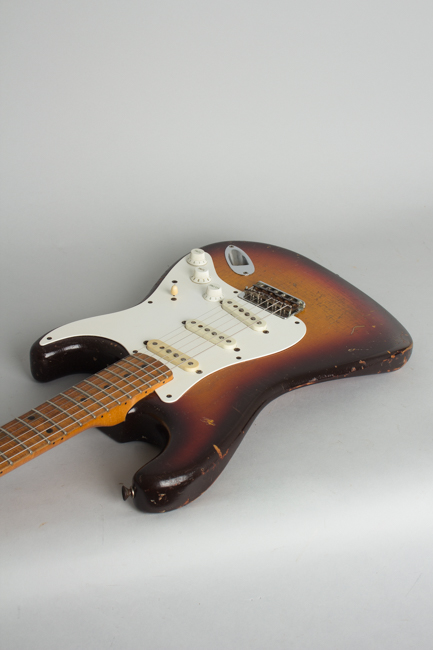 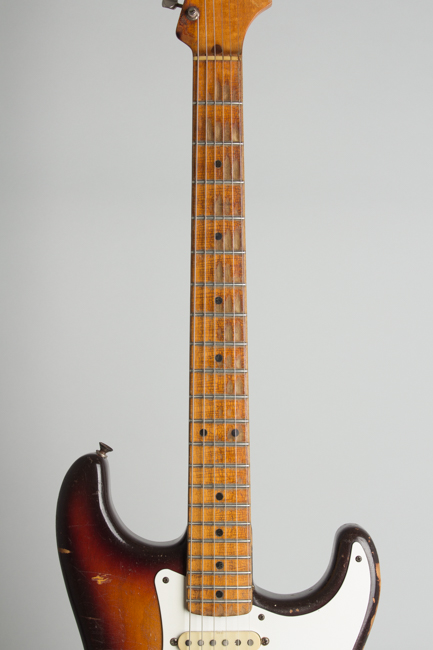 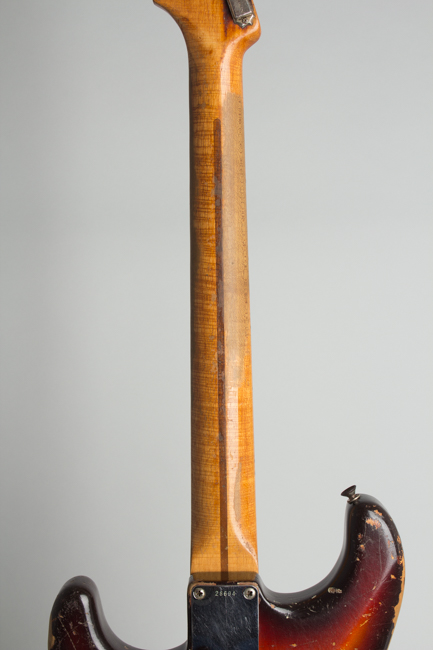 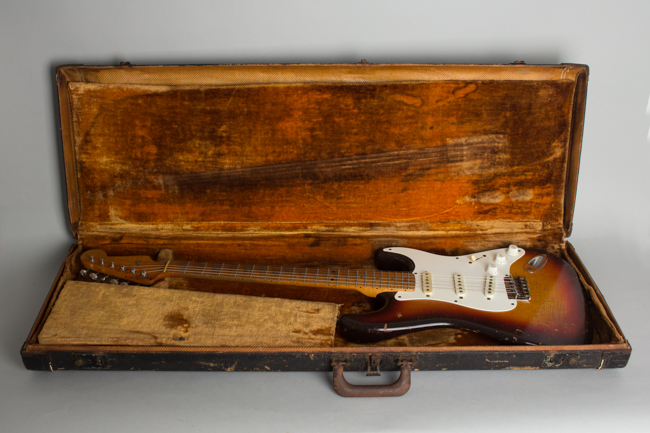 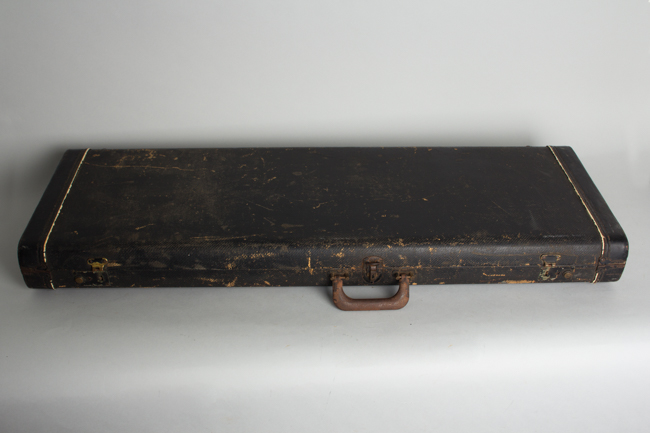 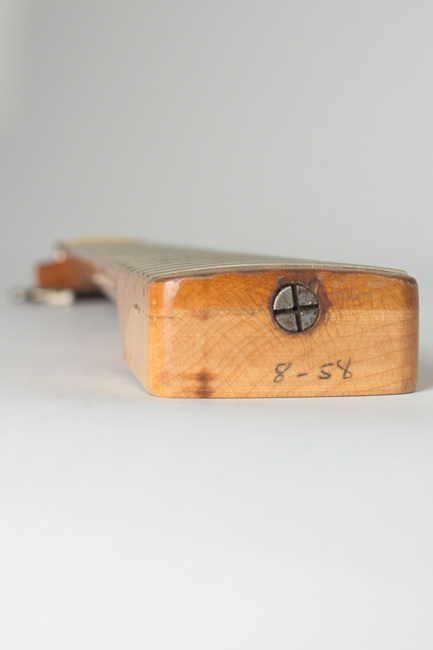 This is a superbly worn-in early "Hardtail" Fender Stratocaster, built without the tremolo system that is one of the model's usual hallmarks. This Stratocaster dates to the summer of 1958, several years after the model's introduction but a time when it was still the most futuristic fretted instrument on the market and a showpiece for Fender. The new Jazzmaster was just waiting in the wings at the time! The body sports the recently introduced 3-color sunburst lacquer finish which added a red layer to the previously more staid two-tone brown livery, giving it an even flashier look.

While this less expensive "non-trem" option was advertised as available from the beginning, relatively few were actually ordered or produced as the tremolo model proved more popular. The sound is actually rather different in detail than the trem model as the slight natural "reverb" provided by the spring assembly is absent. The tone is a bit more Telecaster-like as it shares that model's through-body stringing, but the unique Stratocaster electronic response remains intact. "Hardtail" Stratocasters have remained a minority flavor but there are players who absolutely prefer them to the common tremolo models, and sometimes to any other guitar.

This guitar is dated 7-58 in the neck pickup cavity and 8-58 on the heel of the neck. This has a round-backed profile marking a return to the original Fender shape after the shift in 1956-7 to a "V" profile was reversed by this more subtle shaping. The hardware and fittings remain original including the Kluson deluxe tuners, single layer white pickguard, chromed non-trem bridgeplate screwed directly to the body, and stamped steel "Fender Pat.Pend" saddles.

"Under the hood" it is ALL original. The three pots are a matched set date coded 304-825, indicating fabrication in the 25th week of 1958. The tone pots use the "Chicklet" capacitor specific to this period and the switch, wiring and solder joints remain unmolested. All three pickups are fully original and sound great, and the three-way switch has a very solid feel, selecting the "in-between" tones easily. The neck pickup cover appears a bit more amber colored than the other two from the front; when examined from below it is identical and has just been "smoked' a bit more from exposure. Perhaps a long-ago user held his cigarette in his picking hand?

While this guitar has seen some heavy use it has managed to avoid the indignities many old Fenders went through like amateur refinishes, humbucker routs, jumbo refrets, and locking tremolo installations. This guitar plays very well and sounds spectacular, with a beefier sound than some '50s examples. While Stratocasters have been re-issued and "relic-ed" endlessly over the last decades, the non-trem models are rarely reproduced. These "Hardtails" remain a breed apart, with their own intangible magic for the player looking for a subtly different sound. While far from a cosmetically perfect example, this is a wonderful instrument nonetheless. It remains as Leo and his crew intended, a working tool and tone machine par excellence, and a wonderful-feeling guitar with the weight of some history behind it.

This is about as "genuine relic" as an old Fender instrument gets; played, worn, and loved for years but never altered or abused over a long and probably eventful 60+ year life. There is a LOT of wear externally, but the instrument remains nicely original. The thin lacquer has wear including chips, scrapes, dings, and checking just about everywhere. There are a some deeper scrapes on the upper body and the forward horn, and a large belt buckle spot in the center of the back. The lacquer still retains a decent amount of red in the sunburst and has not faded heavily as some have.

The family of the original owner passed along that he owned the guitar while serving with the US Navy, taking it with him on deployments. There is a picture of what looks like an on-base jam session, with this Strat accompanied by a Les Paul junior and an accordion! This Naval career likely accounts for some of the more visible and unusual wear patterns. It looks like some sort of heavy penetrating lubricant was used on the tuners, resulting in a lot of disturbance to the headstock finish. The clear lacquer is heavily checked, ambered, and has micro-flaked in a few spots. The Fender logo decal has almost completely disintegrated leaving only a few tiny pieces behind. The "ghost" outlines are still clearly visible; especially under blacklight. The decal could be replaced with a repro but we prefer to leave it as it has been for decades.

The neck finish is also quite heavily worn, checked, and colored somewhat at least partially by this same mystery lube. There are wear spots down into the fingerboard wood but no added finish. It has been neatly refretted with period correct wire and despite the heavy wear remains an excellent player and superbly comfortable, worn down to the bare maple on the back in that classic Fender way. The headstock also bears a "classic" cigarette burn in the familiar spot by the low E tuner.

While the outside of this guitar is fairly well-battered, internally it is amazingly clean. All electronic components including the pickups, pots, and wiring are intact with untouched solder joints and fully functional. The pickguard is surprisingly well-preserved and has never cracked or darkened appreciably. The bridge is fully original as well, the steel saddles in particular showing typical corrosion. The length adjustment screws appear original; we would guess the height adjustment screws have been correctly replaced as otherwise they would likely be heavily corroded as well, which they are not.

This Stratocaster still resides in a period tweed HSC, which has also held a Telecaster, and has been heavily worn and painted black at some point along the way. The two end latches are broken and only the center flip-up latch is functional. We were a bit disappointed the case did not have "U.S.N." painted on it, but this Fender never served in an official capacity, as far as we know! While we all love a clean '50s Fender, the ones with stories behind them often seem to have the most soul; this is simply a wonderful guitar with a lot of history that really comes alive when plugged in to that old tweed amp! Very Good + Condition.
×