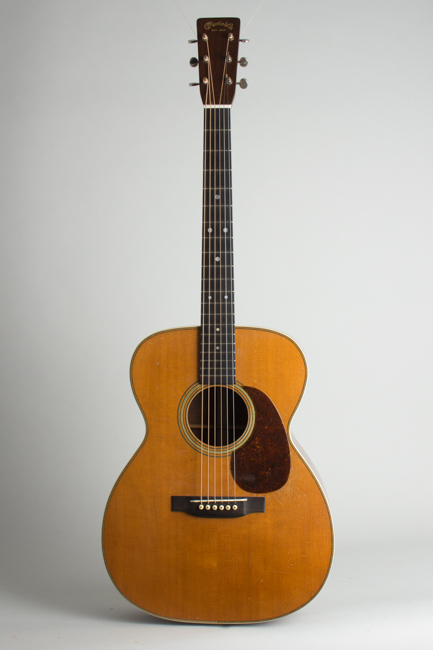 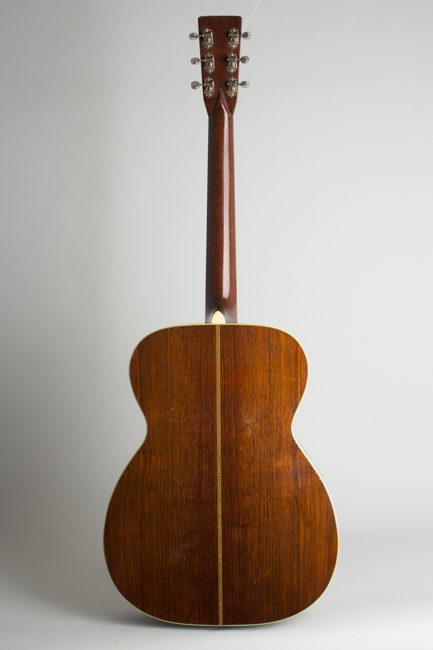 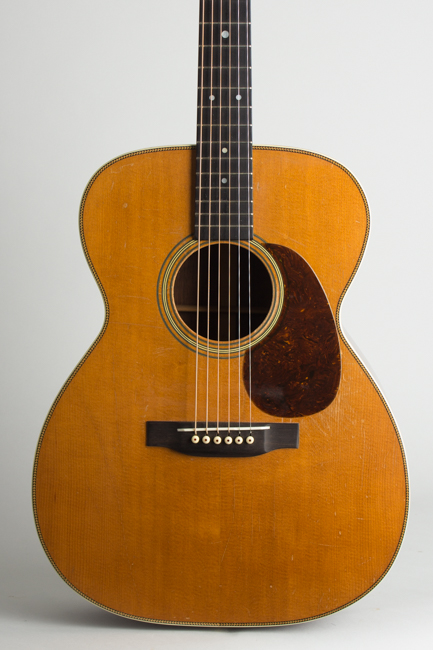 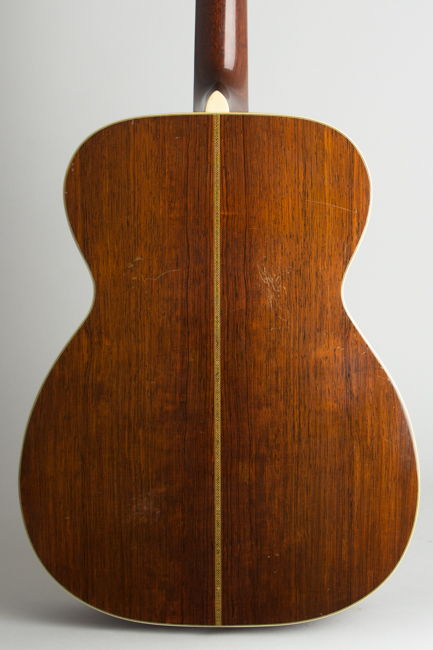 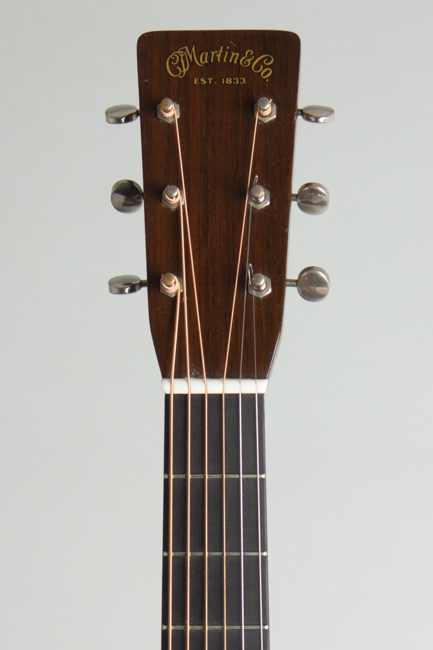 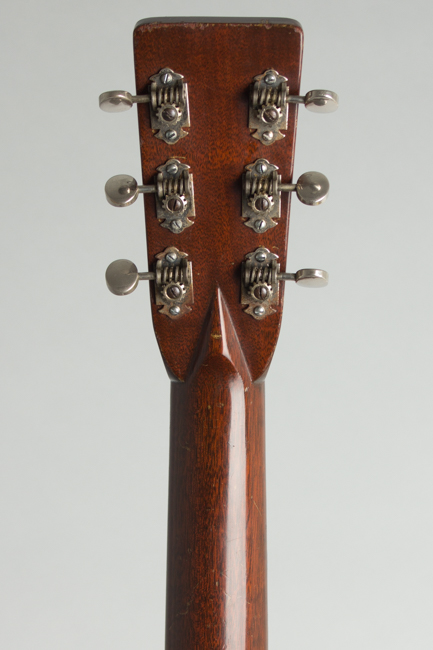 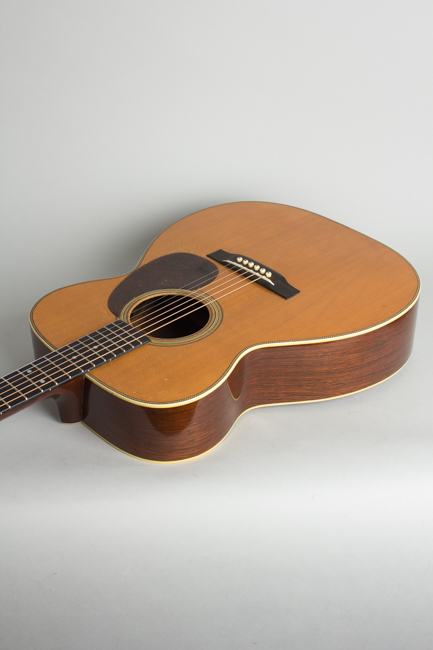 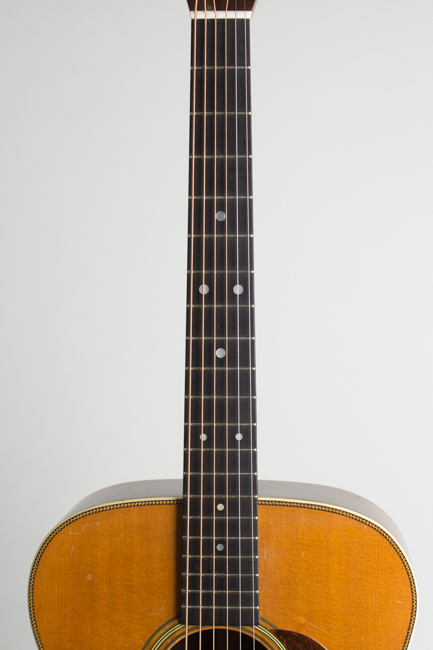 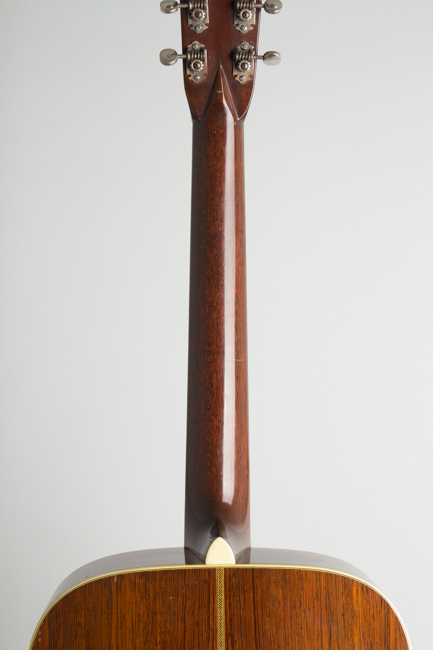 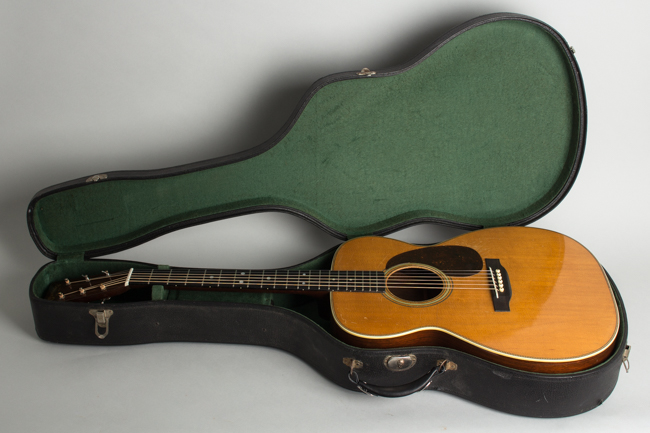 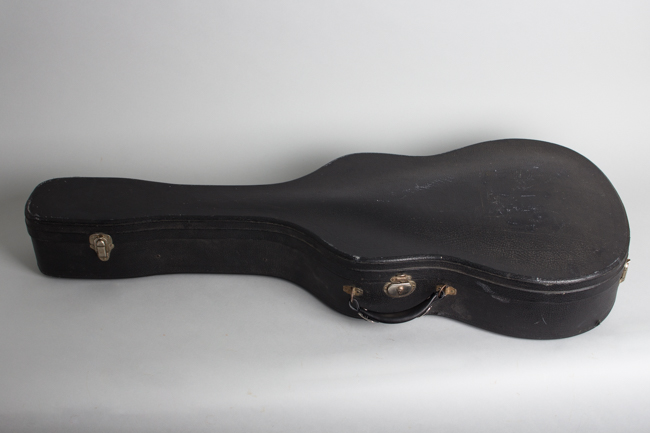 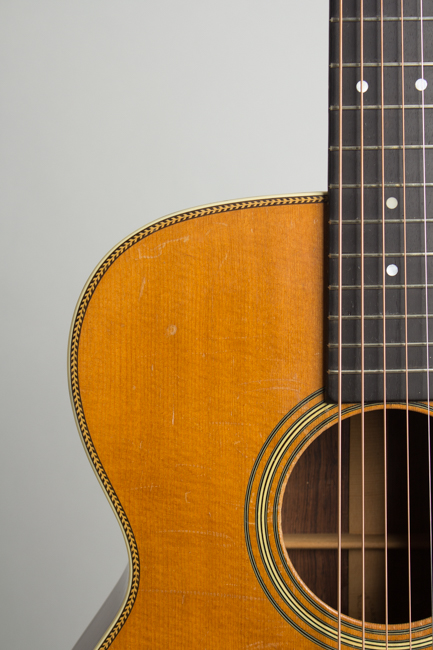 There are certain guitars that are the standard by which others are judged and Martin's 14 fret 000-28 "herringbone" is certainly one of them. This example was made in late 1946, just as the company was getting back on a peacetime footing after the war years. The Auditorium sized 000-28 was the Martin company's largest and most expensive non-Dreadnought model at the time, with all of the fancy pearl bordered instruments having been discontinued after 1941. It was priced at $127 when this example was built, with the D-28 listed at $144. While always a popular and well-respected instrument, Brazilian rosewood 000s from this period are far from common. Only 134 000-28s were produced in 1946, compared to 500 000-18s and over 400 D-28s.

The rosewood body in the 15" wide 000 size is generally considered one of the best all-around guitars for both finger- and flat-picking styles. This 000 shows typical appointments for the era, a time when many things changed at Martin. The back and sides are Brazilian rosewood with the lovely even straight-grain figure Martin prized. The early Sitka spruce top is bordered with the famous "herringbone" wood trim that until 1947 defined style 28 models, bound on the outside with ivory celluloid. The serial number indicates this example would have shipped out around the end of 1946, making it one of the last to feature that now-coveted "herringbone" which was discontinued at the beginning of 1947.

The back is triple-bound in celluloid with a zip-zag pattern backstrip. Other features include a mahogany neck, ebony fingerboard, long-saddle ebony bridge, multiple celluloid sound hole rings, and a dark brown tortoise celluloid pickguard. The unbound fingerboard is fit with pearl dots of varied size, a recently introduced feature replacing the prewar diamonds. The peghead is faced in straight grained Brazilian rosewood with the gold "C.F. Martin & Co." decal at the top. The neck profile is quite a bit chunkier than the wartime style, round backed with less hint of a "V" profile than Martins since the mid-'30s. The tuners are single unit Waverlys with metal buttons, still intact and quite functional even after decades of use.

The 000-28 is to some players about the perfect flat-top guitar. The 15" wide narrow waisted body is just over 1/2" smaller than a Martin Dreadnought which yields a generally more focused midrange sound. The instrument is extremely responsive, offering considerable power and depth combined with sweetness, sparkle, and a singing character. The scale is slightly shorter than the Dreadnought which makes the action a bit more supple.

Many of these guitars were working instruments for professionals, played into the open mics of radio studios and barn dance stages. Many Cowboy and Country and Western performers of the period (accent on the "Western") found the Martin 000-28 one of the best instruments for this musical environment. This was a rough-and-tumble world and guitars were often literally "played into the ground" over the course of a career. This one has survived in well above average condition. It still plays effortlessly with the smooth and powerful sound typical of original 1940s Martin guitars and remains a perfect choice for a wide range of musical styles vintage or contemporary.

This guitar shows some general wear but remains in excellent playing condition, with the extremely fine sound Martin guitars of this period are justly renowned for. It shows some general finish wear including dings, scrapes, and dents overall, but far less than many. The top shows finish loss from pick action mostly in the area just below the pickguard, with some random scratches above the sound hole and around the fingerboard. The back has several smallish spots of belt buckle wear through the finish. The finish is largely intact on the back of the neck, with some small dings and scrapes.

The guitar shows no major repairs or notable alterations from original. Apart from one very small and well-cleated spruce grain split at the top rear edge of the pickguard, the instrument remains crack-free. The tuning pegs remain original, and there is no overspray or added finish anywhere. The bone nut and saddle are newer; the bridge and bridgeplate are original. The neck has been neatly reset and refretted with correct style wire. Playability is excellent and this is a simply superb instrument by any standard, a rare example of a late "Herringbone" 000 complete in its original HSC. Excellent - Condition.
×