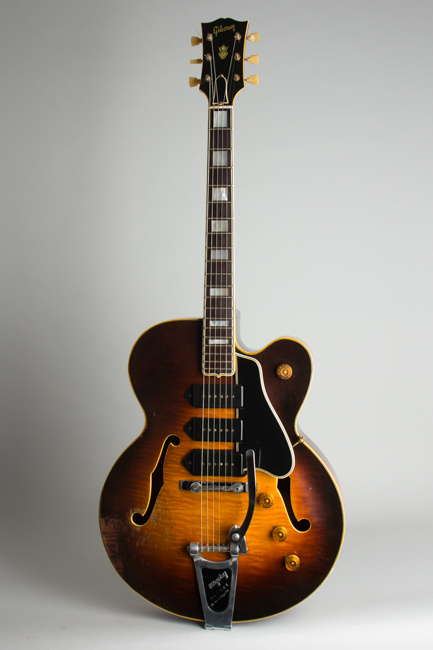 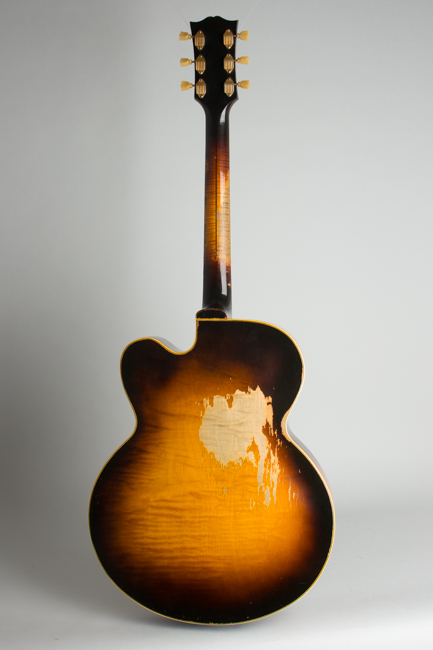 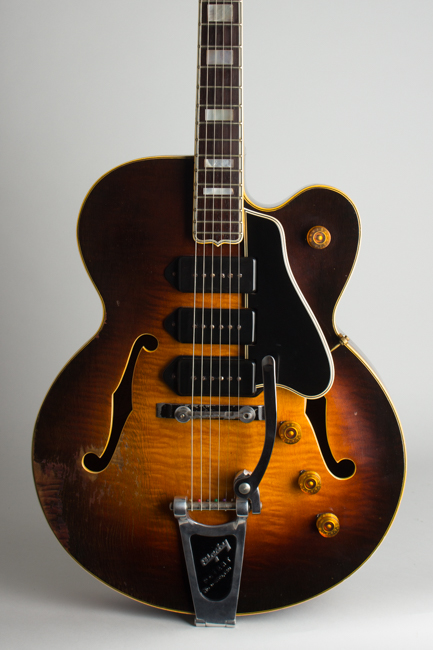 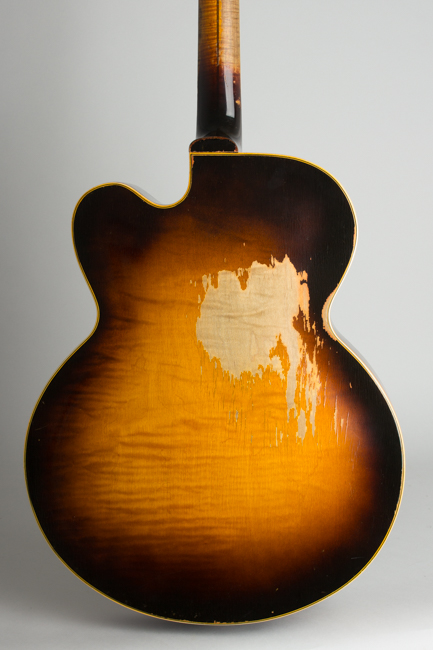 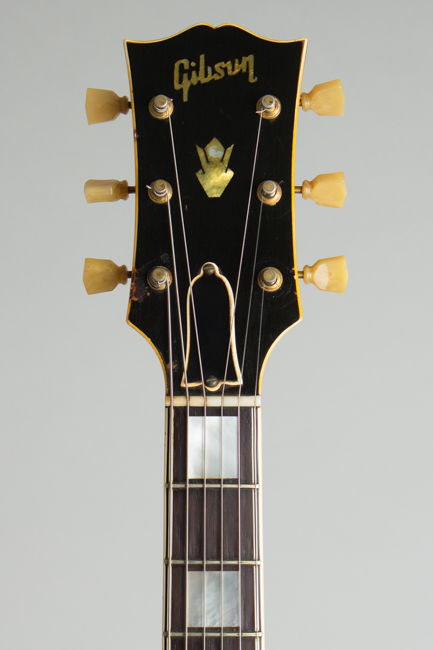 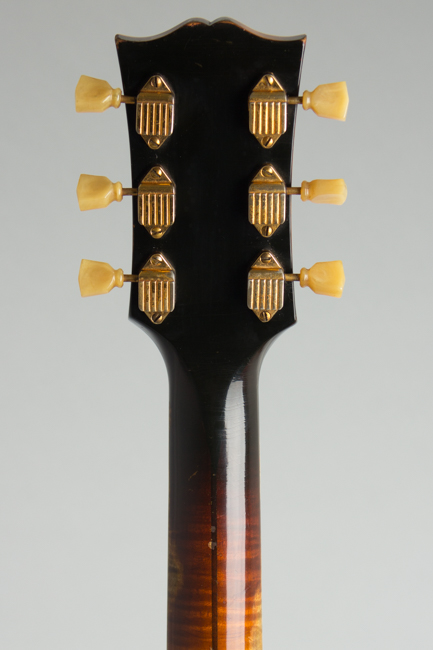 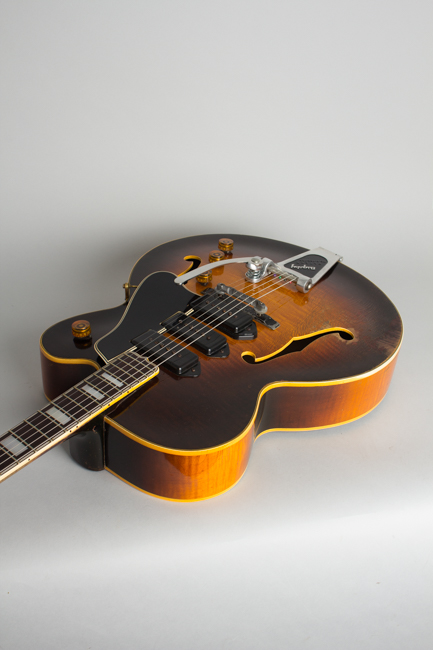 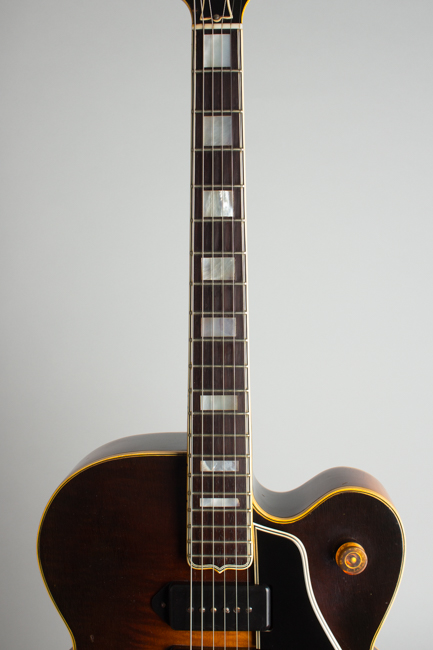 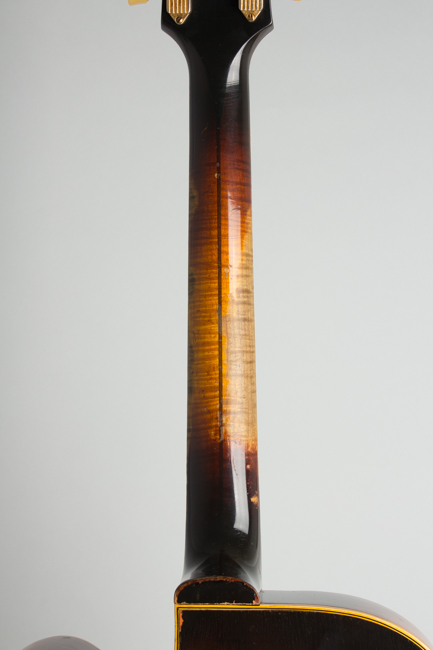 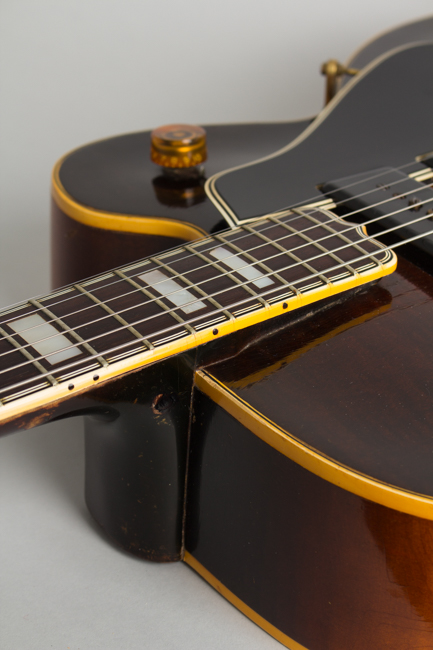 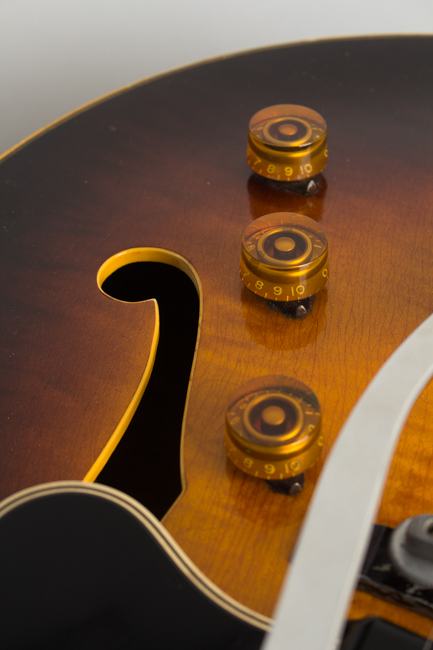 This is a well-played but super vibey original example of a 1950s ES-5, one of the all-time classic Gibson arch top electric guitars. This 17" fully hollow guitar was the most deluxe electric model Gibson offered when it was introduced in 1949. The *three* black covered P-90 pickups were a novel appointment at the time, something no other maker had yet tried. It was the direct inspiration for the even fancier Epiphone Zephyr Emperor Regent, and by extension the Fender Stratocaster.

The early ES-5 has no switch fitted; the pickups are controlled by three individual volume knobs on the lower treble bout and one master tone knob on the cutaway. These are topped with amber plastic "Hatbox" knobs, clear with numbers as used by Gibson in the mid-1050's. All the hardware is gold-plated.

The laminated maple body has a single rounded cutaway and two bound f-holes, with a beautiful tiger grain on top and back. The pickguard is five-ply laminated plastic with a beveled edge. The very flamey maple neck is a three piece laminate, the center element being a narrow black stripe. The rosewood fretboard is five-ply bound and inlaid with pearl blocks. The headstock is single-bound with a mother-of-pearl crown and Gibson logo inlaid in the peghead overlay. The back of the peghead is painted black, coming to a point just below the nut on the back of the neck. The Kluson Sealfast tuners (nicknamed "Wafflebacks") have plastic "tulip" single ring buttons.

This guitar caries a later Bigsby vibrato tailpiece, but also an intriguing piece of hardware in an original first-generation 1954 Bigsby aluminum bridge. This and the lack of other markings on the rim suggest the instrument was factory fitted with an original 1954 Bigsby tailpiece, which would be an early example of Gibson's use of the device. The first Bigsby vibrato tailpieces were a "fixed arm" design, and most have been replaced over the years with units equipped with the "modern" (post 1956) swing-away arm. At any rate the aluminum bridge with the black enameled base appears to have been on the instrument since 1954, and adds a definite edge to the sound.

This guitar has an ink-stamped factory order number suggesting a mid-1953 build date, but the serial number is actually noted in Andre Duchossoir's book GIBSON ELECTRICS as having been shipped on October 4th, 1954. This suggests the ES-5 was probably overproduced in 1953, and this one languished in stock for over a year before being sent out on order. Only 65 sunburst examples of the model were shipped in 1954; these were always expensive instruments and even in their heyday sold fairly small numbers. The ES-5 design was modified in 1955 with a large pickup selector lever switch on the cutaway and dubbed the "Switchmaster", in which form it lasted into the early 1960's.

Aside from its knockout looks, this ES-5 is a great-playing and sounding guitar, the most versatile of full-depth Gibson electrics due to the extra tonal shadings offered by the center pickup. All three pickups can be blended in any combination and despite the lack of a switch it is easy to select a range of sounds by dialing in the individual volume controls. This model is most famous as the guitar of choice for T-Bone Walker in his heyday and remains well-suited to a variety of jazz, pop, blues, or early rock and roll styles, in addition to being a very collectible instrument.

This ES-5 has seen some serious play time but remains nicely original except for the later Bigsby tailpiece. While the guitar shows some heavy play wear it has still been well cared for over the years. There is wear through the finish on decent size areas of the front and back of the body from contact with the player; someone did many cookin' gigs with this one and simply sweated through the lacquer. The finish also shows some typical checking overall but apart from these spots mostly has just small dings and dents.

The back of the neck is also fairly heavily worn down, with a decent amount of bare wood exposed on the bass side and some more specific rub-throughs on the treble edge. It actually feels great, almost like an old Fender neck; it is made of maple after all. The frets are an older refret with correct-style wire that show some wear in the lower positions, but not so much as to affect playability. There is a "classic" cigarette burn on the headstock face by the low "E" tuner, further enhancing the "real relic" vibe.

All hardware and fittings remain original and in excellent condition except for a the Bigsby as noted above, which looks to be from the '70's or '80's. The 1954 Bigsby bridge has some chipped enamel on the base and the aluminum saddle is tarnished. The only notable repair to the instrument is a somewhat oversized jackplate added over what is certainly a crack in that area. All is solid and the guitar still plays very nicely and sounds just great.

This is not a "collector clean" guitar but a super vibey ES-5, a true relic if its times which carries the aura of many smoky juke joints about it. While we don't know who played it heavily "back in the day" it has the feel of an old Blues or "Hillbilly" hotshot's guitar more than a jazzer's piece, both in the wear patterns and Bigsby spec. It is superbly redolent of that early R&B/Hillbilly boogie/Rock & Roll era in both style and sound and does the T-Bone thing in spades! The guitar is housed in a good more modern black Tolex HSC; we'd assume the original gave up the ghost some time back. Very Good + Condition.
×