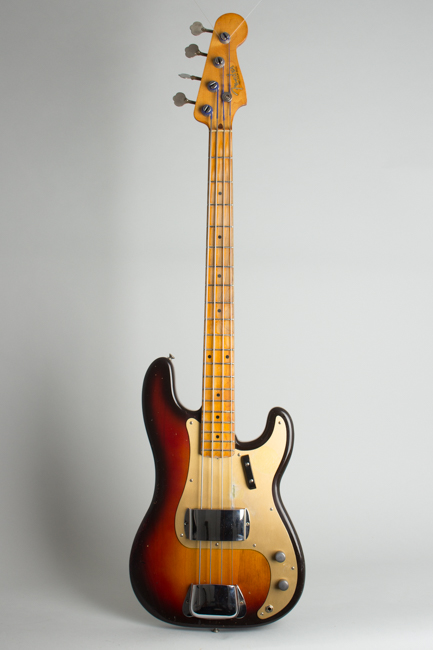 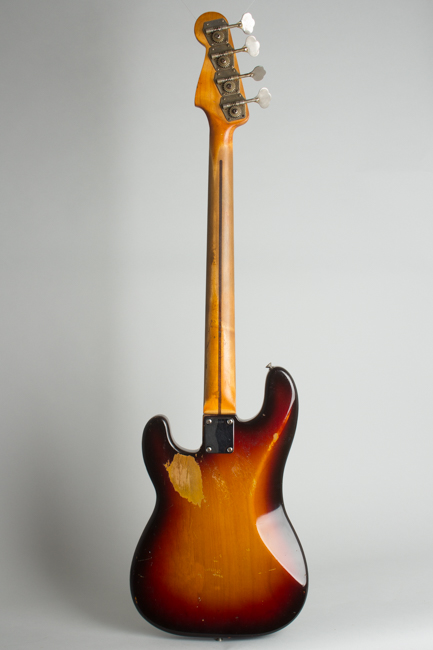 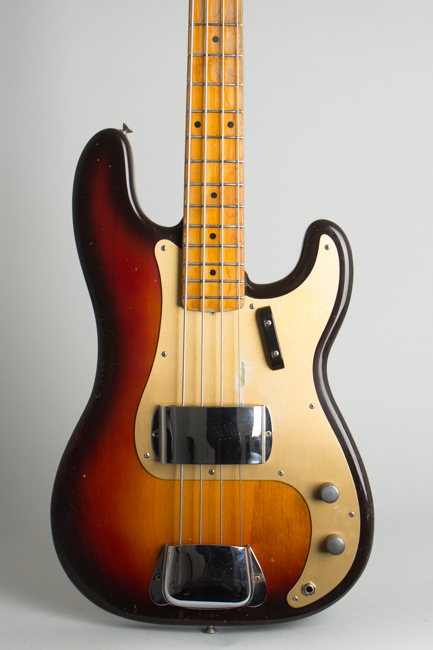 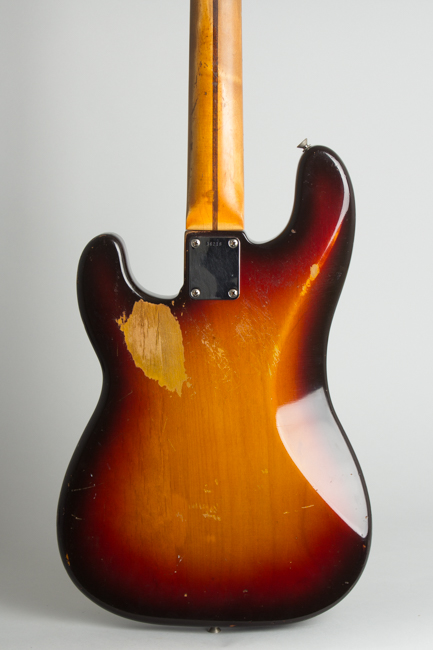 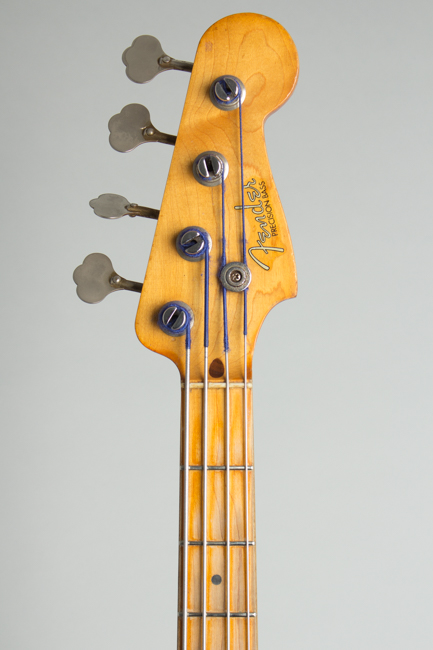 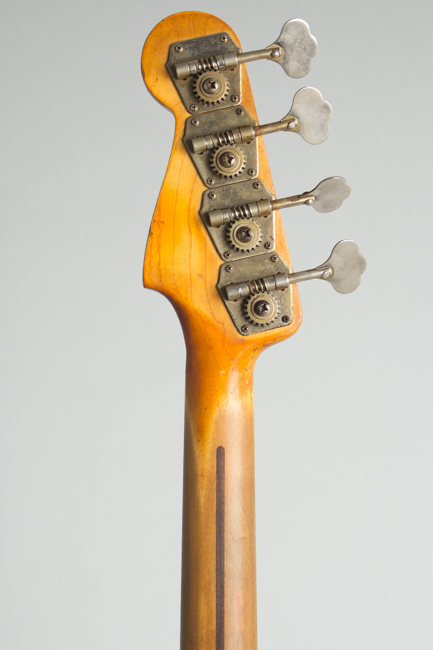 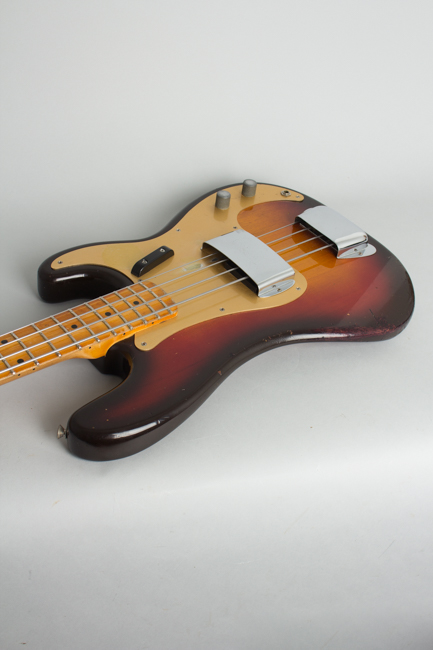 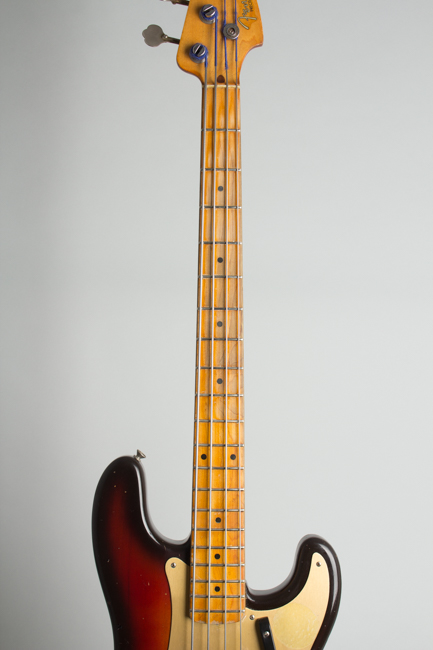 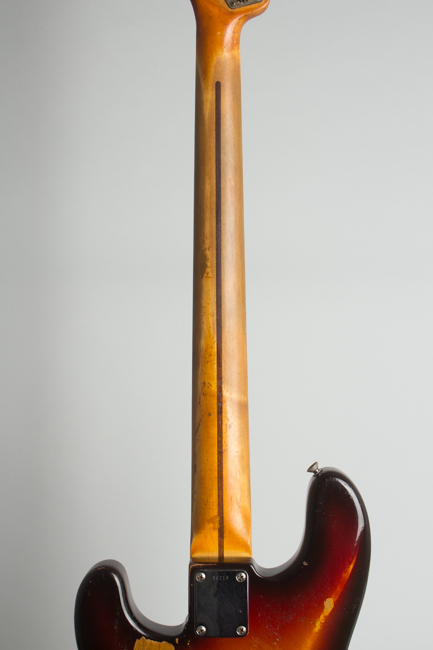 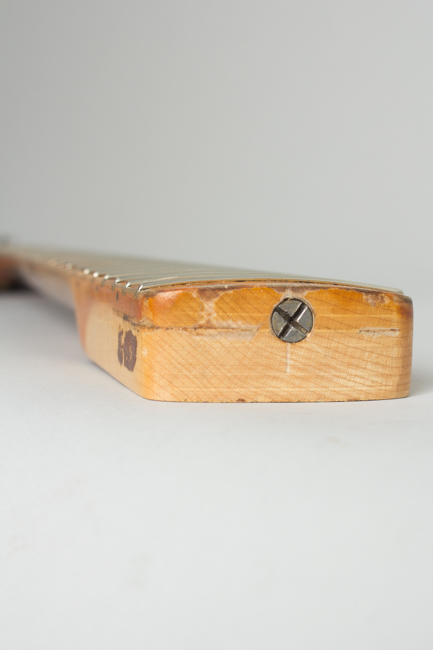 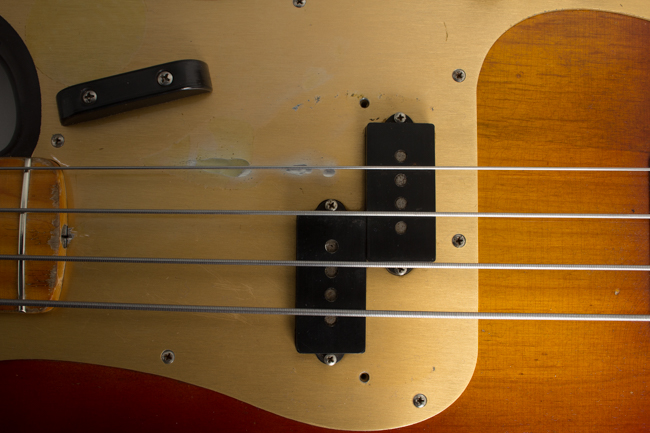 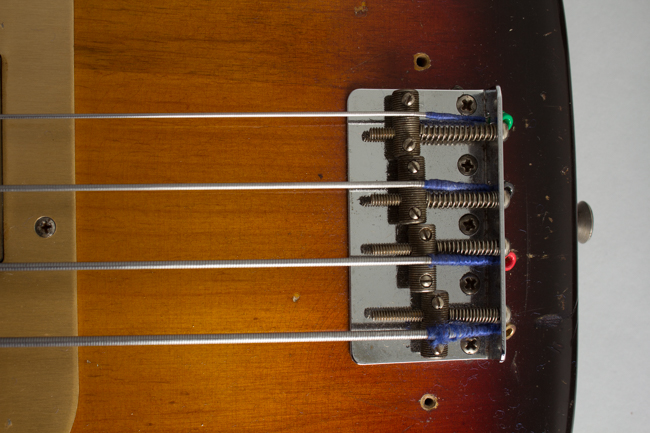 Sometimes simple is the way to go. This 1959 Fender Precision Bass is a great example of what many players and collectors hold to be the finest electric bass ever made, and the template for so many to follow. Late-1950s Fender Precisions with this combination of features (gold anodized pickguard, deep 3-color sunburst finish, split pickup and maple neck) have been sought after since the earliest beginnings of electric instrument collecting. They are generally regarded as some of the most desirable of Fender basses and the apex of Precision Bass design.

This fabulous bass is a very played-in but entirely original example the final original maple-fingerboard Fender Precision from spring 1959. This bass was assembled just a few months before the model was altered to receive first "slab" rosewood boards, along with the rest of the Fender line. The beautiful gold anodized metal pickguard would last into the late summer of 1959, and then for many years after was replaced by celluloid and plastic on this, the world's standard electric bass. The tendency of the metal to wear through was the culprit, but the "gold guard" has been a status symbol ever since!

The pots on this bass are dated to the 25th week of 1958, while the body is dated 3-59 with "EI" penciled in for good measure. Like all Fender necks from this exact period, the heel shows no date markings, reportedly to a dealer complaint after an obscene message was found! This is an unproven piece of Fender lore, but a popular story nonetheless.

The bass carries a lovely three-tone sunburst lacquer finish with plenty of red remaining. The natural neck has the headstock adorned with the old "Spaghetti" Fender logo decal, which is in excellent shape. This bass is an absolute classic, as played by the great majority of the then-new electric bassists of the late 1950s and heard on countless recordings. Even in the 1960s, one of these old maple neck, gold guard basses was often considered a status symbol by the discerning bassist. It remains a wonderful instrument for any style of music, an absolute joy to play, and a prime example of the glory days of Fender.

This is a well-worn 1959 Fender bass with a fantastic vibe, definitely heavily played but never altered or abused. The body shows moderately heavy finish wear with a large belt-buckle spot on the back; the edges have typical wear, but the face is comparatively clean. The color in the sunburst is quite vibrant, with less fade to the red areas than many. The anodized pickguard has some wear spots and has been touched up with lacquer including one spot on the lower horn where it looks like a circular sticker was removed. These are not overly conspicuous. All hardware on the bass is original including the tuners, knobs, covers, and most importantly the pickups and wiring, which appear untouched with original solder joints.

The bass has been refretted some time ago with larger than original wire, and there is a lot of natural play wear to the fingerboard. It has never been oversprayed (as was often done to maple fingerboards with refrets in olden times) but shows a decent amount of "smoking" in patterns from exposure to the old-time smoky clubs. (Remember when EVERYONE smoked?) This natural wear pattern of clear lacquer, bare maple, and nicotine-darkened amber is artful in its own "Decasia" sort of way and the kind of look modern "relicers" never seem to capture. The back of the neck is heavily worn down to the bare maple with a fantastic feel.

This is simply a well-played but super fine all-original 1959 Precision, ready for another 60 years of low-end work. While not the lightest we have encountered at just under 9.5 lbs, it is extremely resonant, fairly bright on the vintage Precision scale, and simply one of the nicest-playing and sounding bass guitars it is possible to imagine. It resides in an older re-issue tweed Fender case and looks right at home there. Excellent - Condition.
×