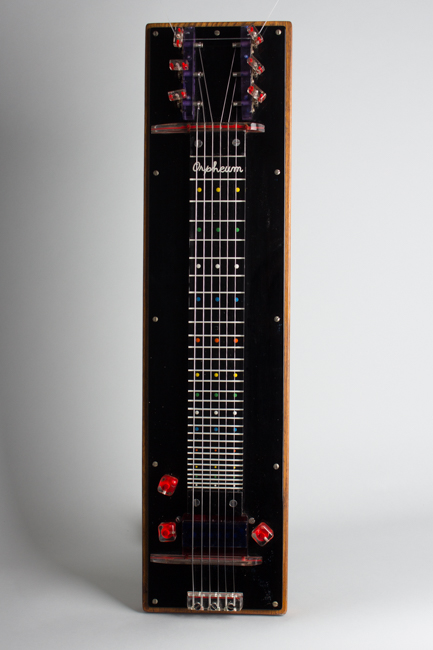 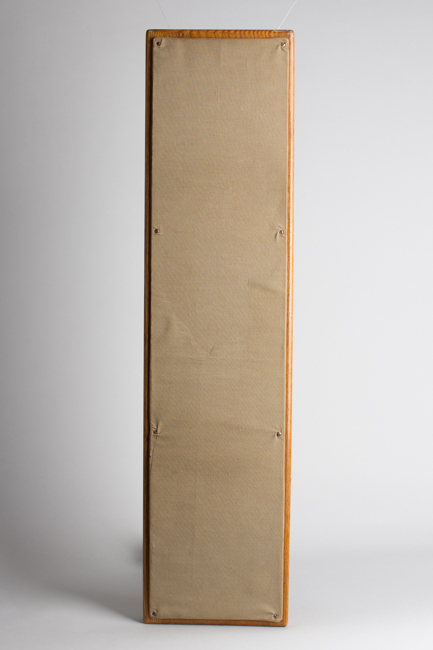 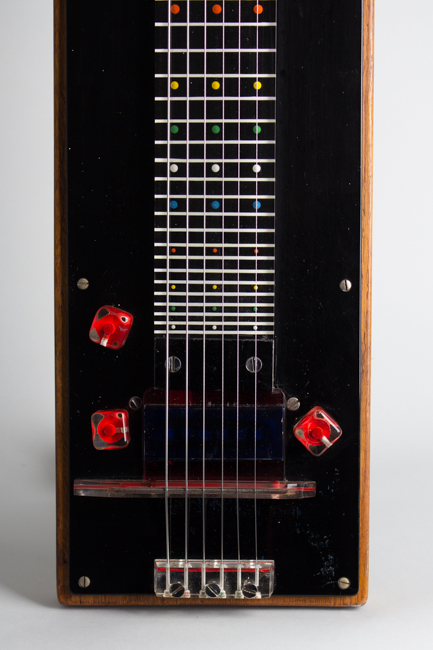 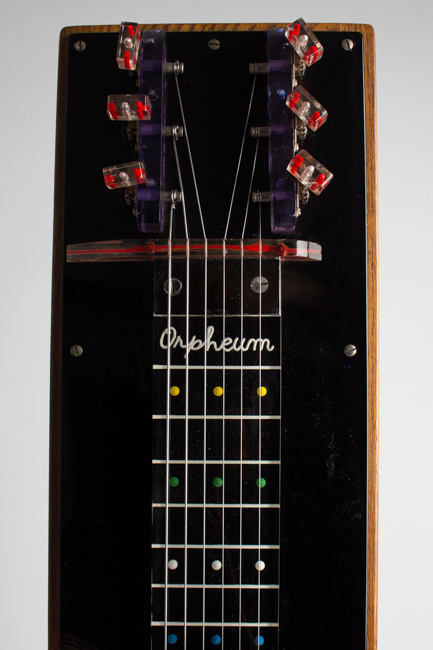 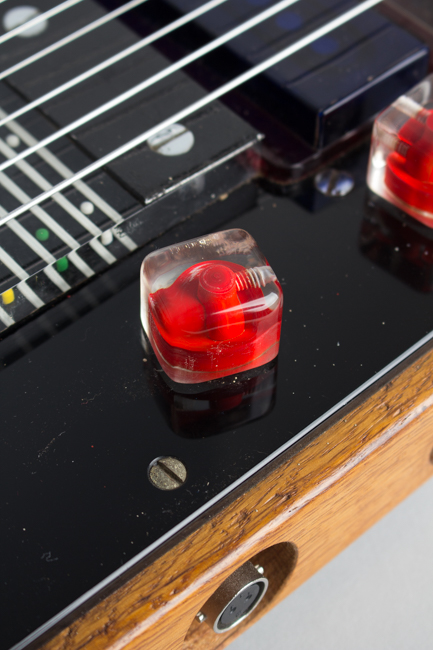 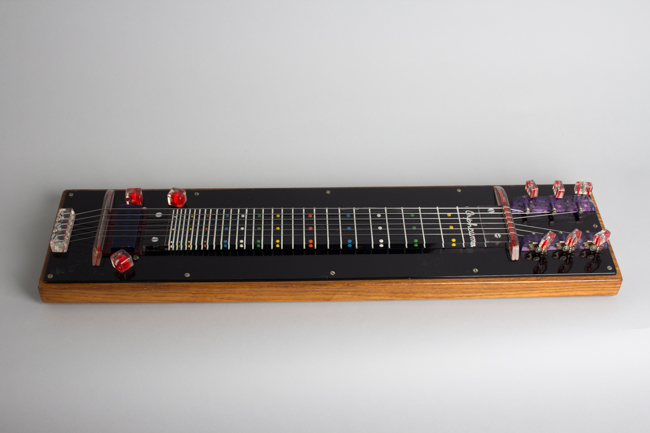 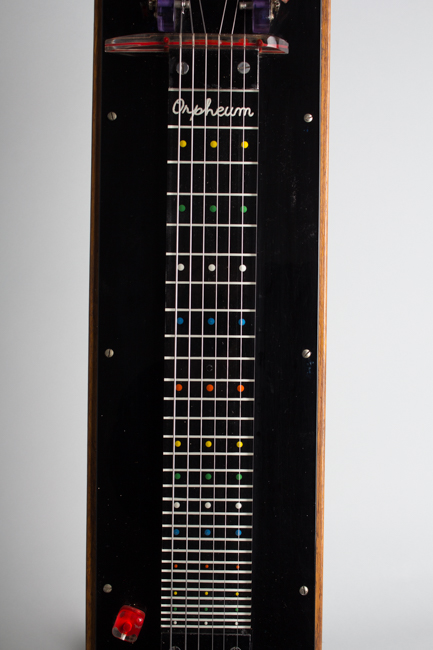 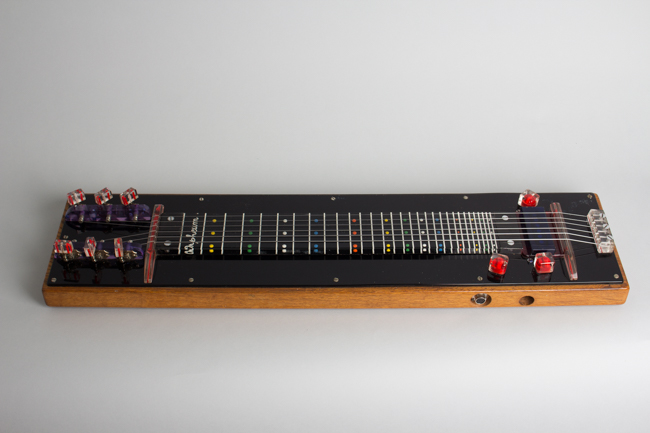 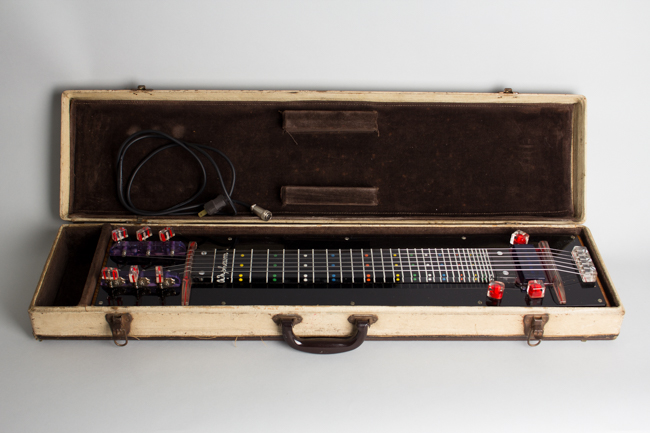 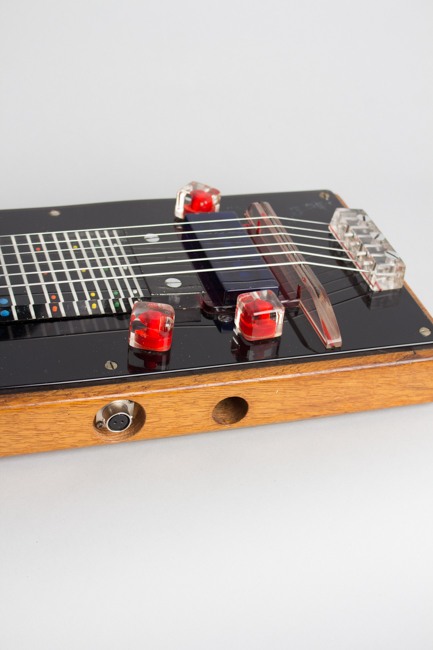 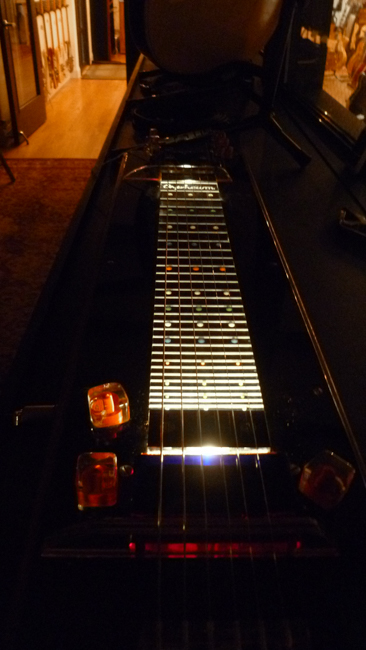 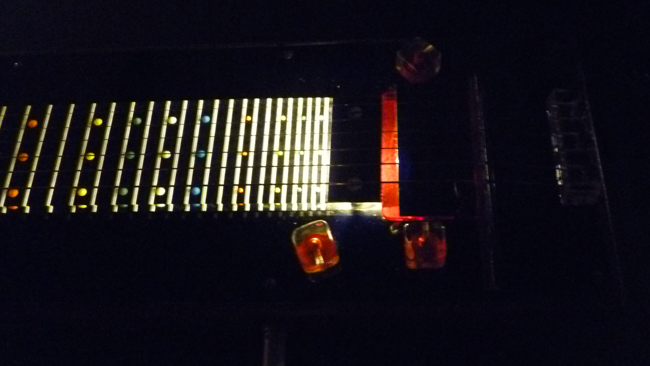 This New York branded instrument is simply one of the oddest --- and most entertaining -- steel guitars we have encountered. For one thing, it lights up! There are actual light bulbs inside at each end of the fretboard concealed under metal plates. The light shines up from below, reflecting off the fret markers and the Orpheum name engraved into the back of the clear Lucite fingerboard. The bulbs are powered via a detachable cord on an independent circuit from the pickup and controls; the upper knob on the bass side is an on/off switch for them.

The bulk of the large rectangular body is built up from solid blocks of oak, hollowed out and fitted with a Lucite top. The back is more pedestrianly covered by a piece of Masonite wrapped in fabric. Nearly all of the upper "superstructure" is made of Lucite. This includes the nut, bridge, tailpiece, tuner blocks, square knobs, tuner buttons and even the pickup casing.

Other period steels exist built primarily from Lucite, notably the Magnatone Jeweltone series and some Alohas. They may gleam under the lights but don't provide any themselves! While it's not certain, this high concept item was most likely sourced from United Guitars in Jersey City who produced a number of more conventional Orpheum models for Lipsky in the 1950s. They are also known to have built Premier-branded steels for the Sorkin company around the same period which featured fish and palm tree motifs cut into similar materials.

Whoever built this, The workmanship is quite good and beyond its purely visual appeal this is a very solid instrument. The sound is delicately pretty but could be described as tame in comparison to many period lap steels. The pickup's output is fairly low, and the single coil is situated some distance below the strings. It does a nice job on clean period Hawaiian or "Hillbilly" sounds but is not naturally inclined to the screaming overdrive some older lap steels are prized for. Of course, there are pedals for that now!

This instrument is difficult to date exactly but the early 1950's is a good guess, based on the hardware and internals. The Kluson tuners look like wartime surplus units, with the flat base and riveted gears of that period. They have been fitted with clear rectangular block Lucite buttons with red accents. The square dice-sized knobs, bridge and nut are all made in the same motif. The strings emerge at the tail from a solid block of clear Lucite, over a Lucite bridge with a fretwire saddle and on through small round holes in the nut, which is clever if not particularly convenient for quick re-stringing.

If we can't say with absolute certainty who made this illuminated gem, we can deduce who sold it. The Orpheum name originally belonged to NY banjo makers Rettberg & Lange. After Lange's banjo empire was liquidated before WWII the brand was purchased by the Maurice Lipsky Music Company, a New York-based distributor. Lipsky applied the Orpheum name to guitars, mandolins and banjos from different builders including Kay, United, and by the 1960s Japanese sources. The large majority resemble instruments built by those factories for other brands, but this beacon-of-light steel is a shining exception.

It is housed in the original case, a bit worn but solid with the latches and Bakelite handle intact but both hinges repaired. With some regret we replaced what looked like the original strings which were to corroded to play well but they are included for history's sake. Whether actually played or simply used as the world's funkiest night lite this is definitely a musical conversation piece par excellence! Excellent - Condition.
×