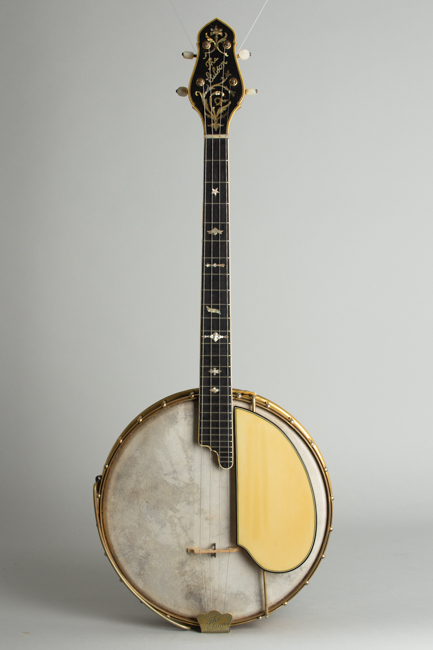 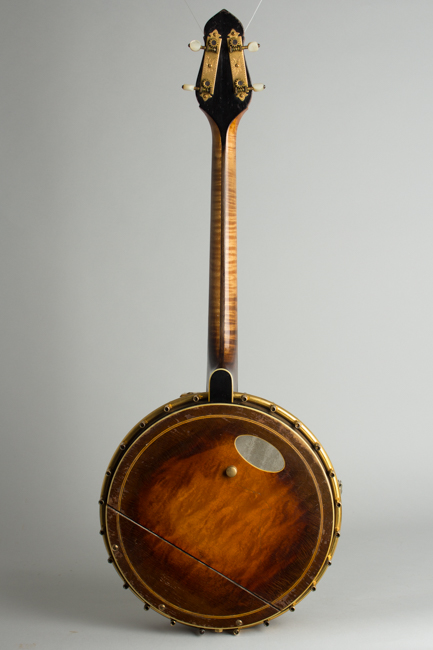 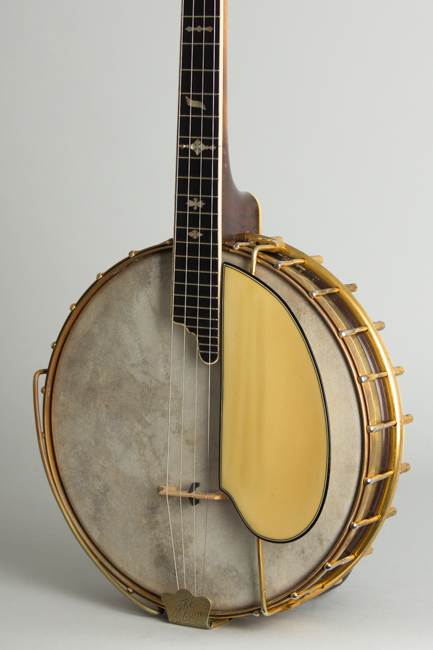 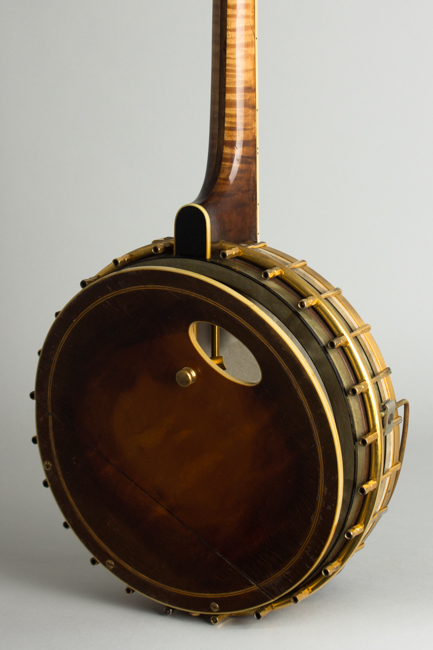 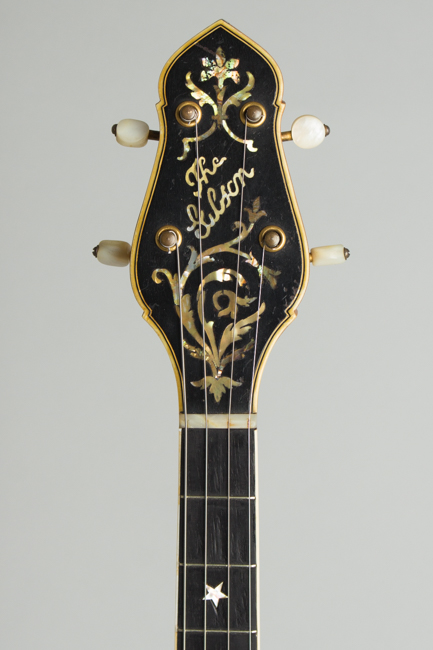 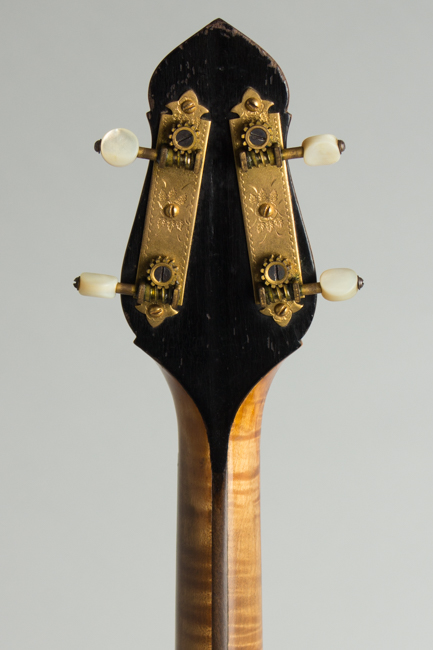 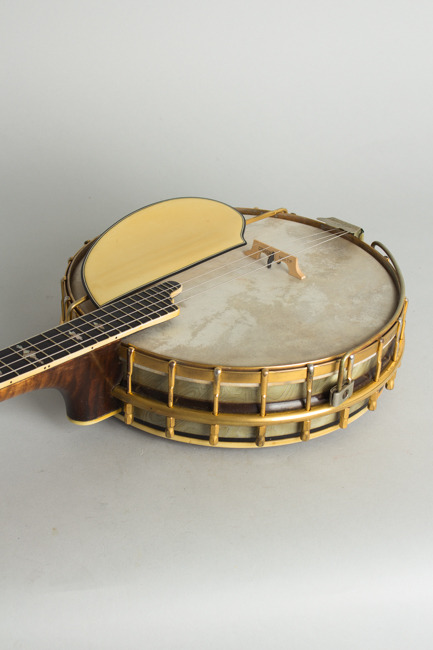 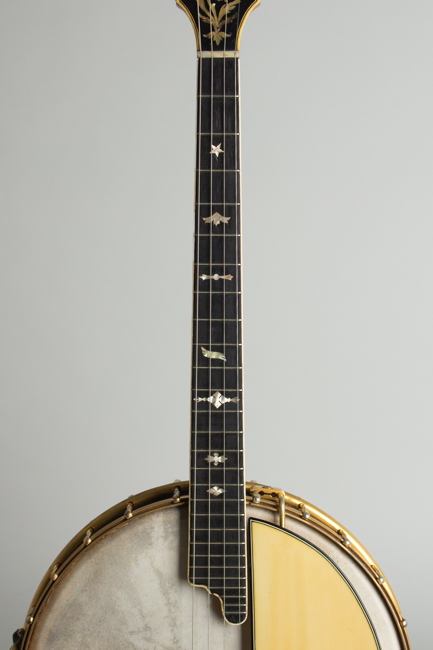 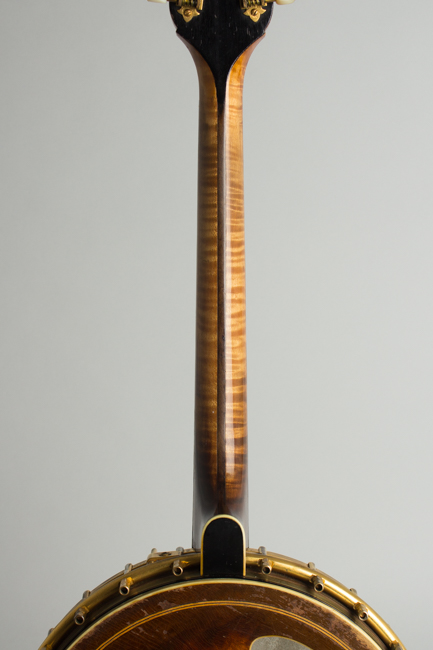 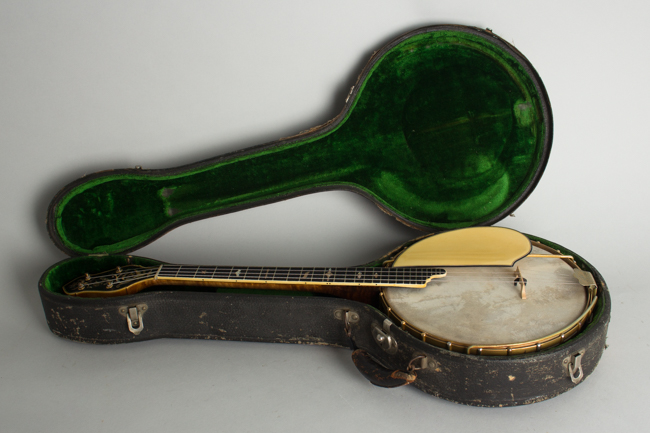 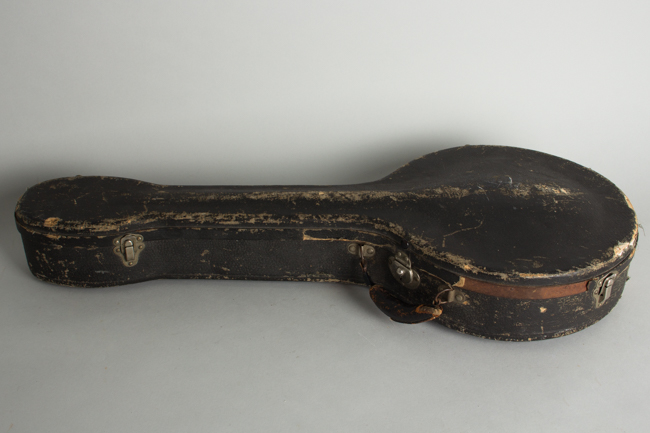 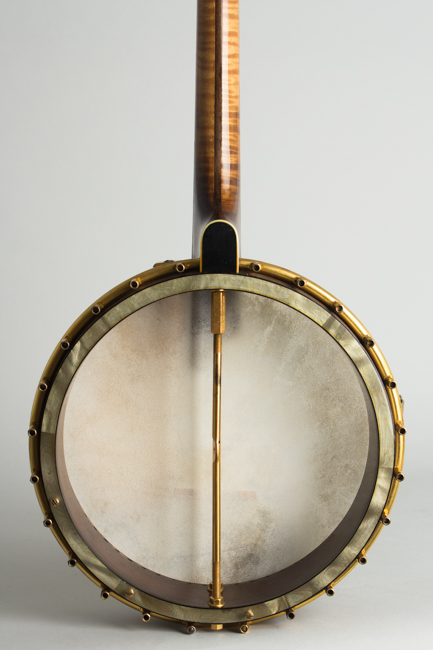 Here's a superbly flashy "Loar Era" Gibson that won't break the bank! This 1923 TB-5 tenor banjo is a particularly lovely instrument, although somewhat eccentric and not the banjo design that Gibson is best remembered for! Nonetheless this top-of-the-line "trapdoor" model -- built not long before the fully developed Mastertone era -- has some of the design and construction features that would soon distinguish that celebrated line.

With a very short-scale neck and smaller diameter rim, these early Gibson tenor banjos have the feel of having been designed by and for mandolin players -- as indeed they were. While not particularly popular among orchestra tenor banjo players, they sold well for a time to Gibson's mandolin orchestra clientele eager to pick up on the new trends. They are beautifully built instruments with an attractive nouveau aesthetic all their own, and have a special appeal apart from the rest of the jazz-age 4-string pack.

Gibson's first banjos appeared in 1918 sporting unusual features including a hollow rim, guitar-type tuners, and further on a unique flat-plate "trap door" resonator. The TB-5 was a late addition to the line, added in 1923 around the time the F-5 mandolin and L-5 guitar were developed. Gibson announced it as "The ultimate in banjo construction, appearance, and tone". Compared to the previous king of the heap, the TB-4, this was a much flashier banjo, and considerably more expensive as well. Compared to contemporary Paramount, Vega, and Bacon instruments, it looked a bit like a delicate miniature and lacked the "modern" professional features like the 23" scale and flanged resonator that were becoming standard in 1923.

This is an early model TB-5 made not long after the model's debut. It features a narrow and very short 19" scale neck built of a 3-way curly maple/ebony laminate with an extended ebony fingerboard. This is decorated (a bit sloppily) with shaped pearl inlay and bound in grained ivoroid. The triple-bound "moccasin" headstock is veneered with ebony and inlayed with a slanted "The Gibson" logo surrounded by a lovely floral motif in abalone. The extended fretboard with 10 additional frets was intended to attract tenor players who had crossed over from the mandolin, Lloyd Loar himself being one of these reluctant plunkers.

The neck and "trap door" resonator are laminated flame maple, ivoroid-bound, and finished in the subtly shaded "Cremona brown" sunburst typical of high-end Gibsons this era. The back of the headstock is black with a point neatly faired into the neck's ebony stripe. The tuners are gold-plated two-on-a-plate decorated Waverly gears with real pearl buttons, as seen on all Style 5 Master Model instruments. The nut is genuine pearl, characteristic of top-line Gibsons of this era.

All hardware is gold plated. The rim is maple coated on all outside surfaces with pearl Pyralin. It carries the then-new Lloyd Loar-designed perforated tubular tone ring resting ball bearings that was used for Mastertones up through 1927. This is the very first version, with no springs under the bearings. The hook/nut bearing ring used here would become half of the "tube and plate" flange system when the "plate" flange was added. This banjo also features then-new Gibson double co-coordinator rod system, which still works like a charm.

The flat plate "trap door" resonator can be opened or closed to alter the tone of the banjo, adding "piquancy" in Gibson's phrasing. Inside the rim is a gold "Gibson Guarantee" label and impressed serial number. This banjo has the optional elevated celluloid pickguard -- bound on the edge, which is a rare touch.

This was an expensive instrument in its day, equivalent to the F-5 mandolin and was top of the banjo line until new "modern" 1925 Master Models were introduced. This early TB-5 is an eccentric but truly beautiful banjo and a fine playable piece of 1920s Gibson history.

This is a generally well-preserved banjo, showing some play wear overall but no major damage or repair. The finish on the resonator has some flaking, chips, and scratches but maintains a lovely look. The neck is not as worn, and the headstock shows small chips and scrapes on both sides. The gold plating has typical wear and some loss but is largely intact.

All hardware is original except for a replacement (but period-correct) tailpiece with an engraved cover has been over-washed to simulate gold (it is nickel underneath) and the wire arm rest. These pieces are authentic period Gibson parts but not original to this instrument; they have been altered a bit to fit but the effect is not bad.

There has been work to some of the neck binding leaving subtle but visible glue marks on the finish on both sides of the heel. The original frets and the fingerboard have some wear but the instrument plays fine, set up with a later skin head and Grover non-tip bridge. The sound is very different from the standard orchestra tenors of the 1920s, with a rather old-fashioned plunk and more warmth and depth than one might expect from such a small rim. The original green-plush lined shaped case is included, fairly well-worn but perfectly functional. Excellent Condition.
×