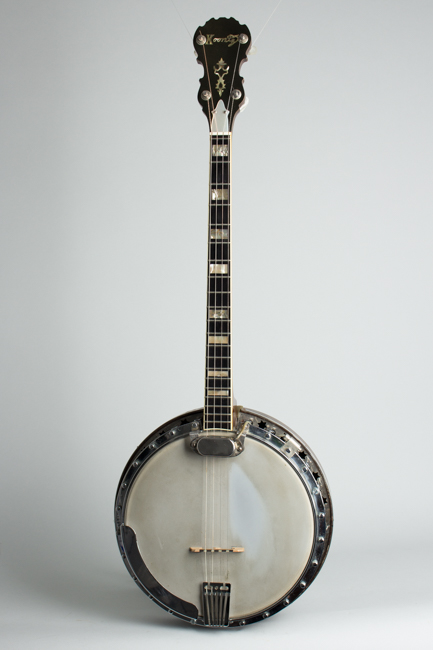 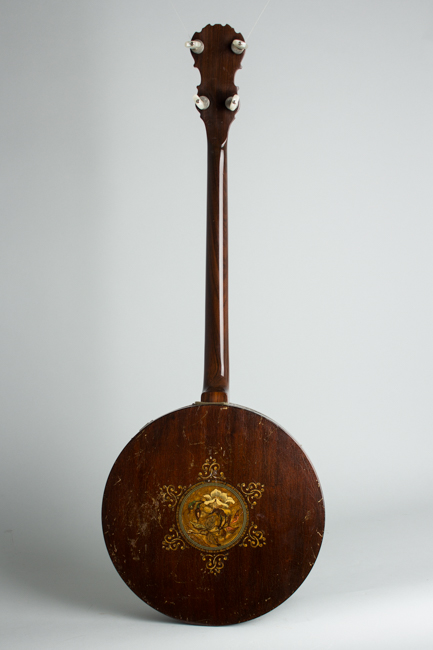 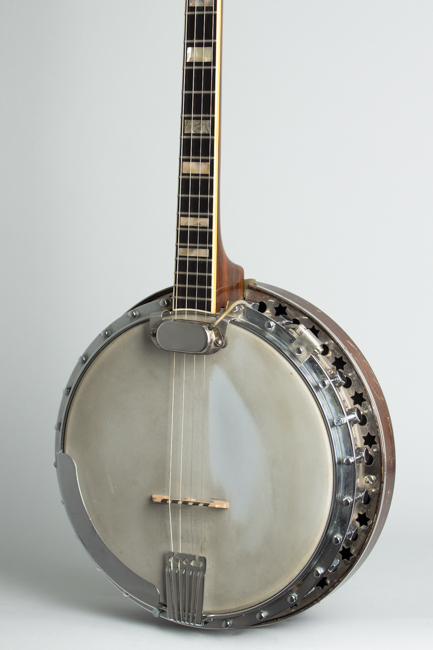 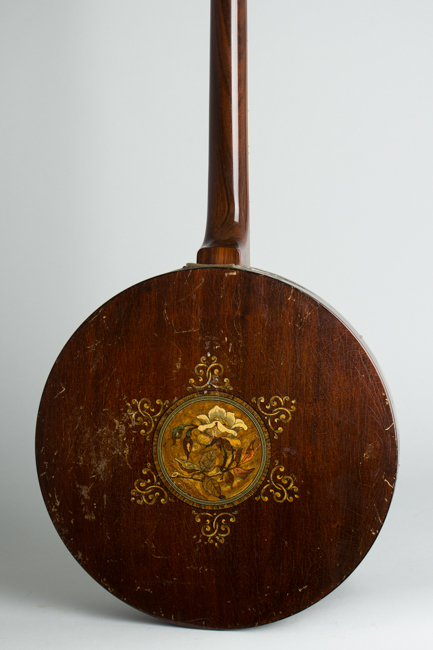 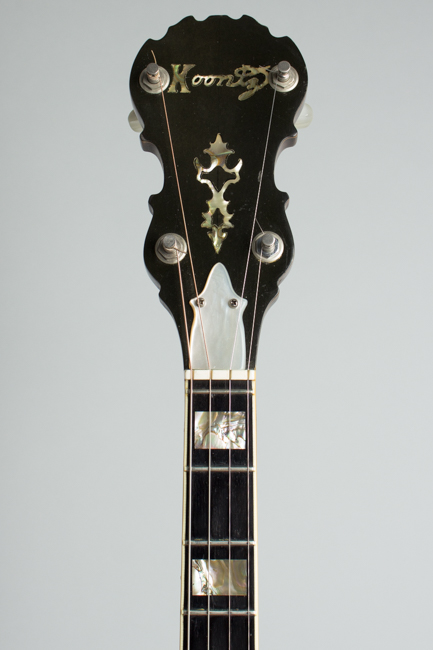 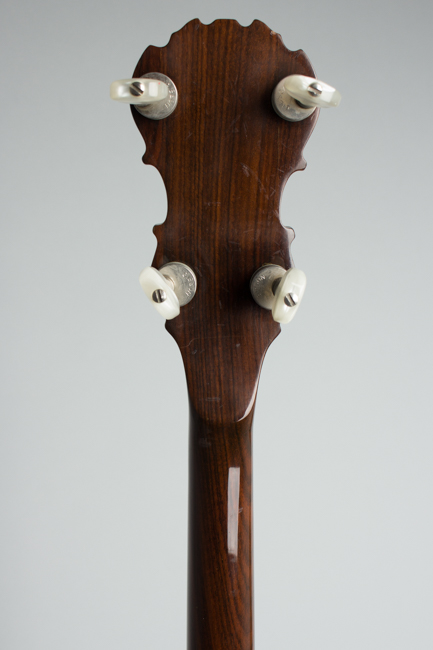 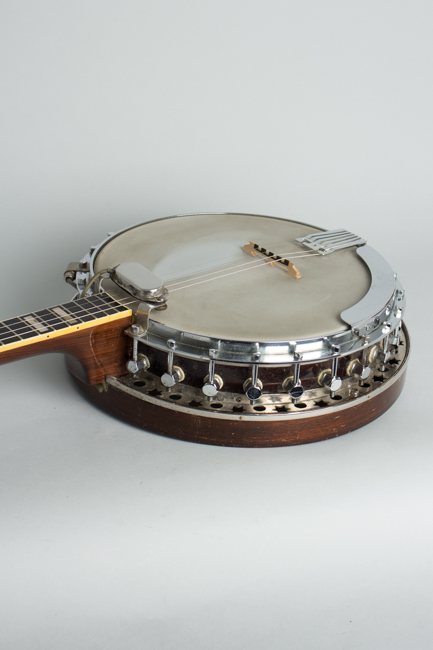 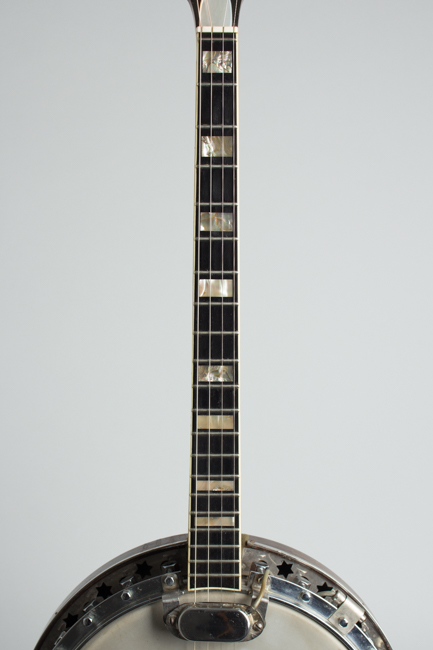 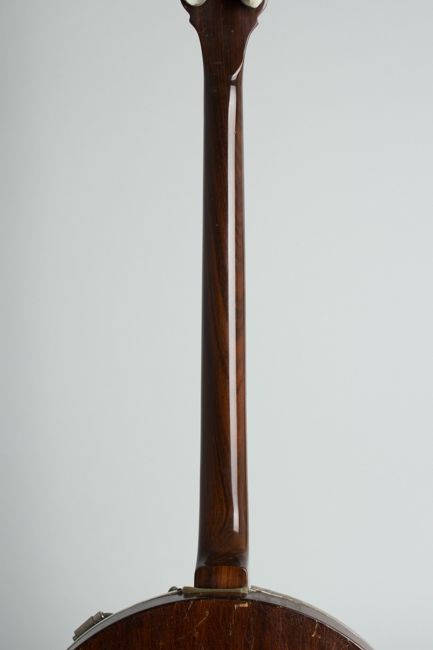 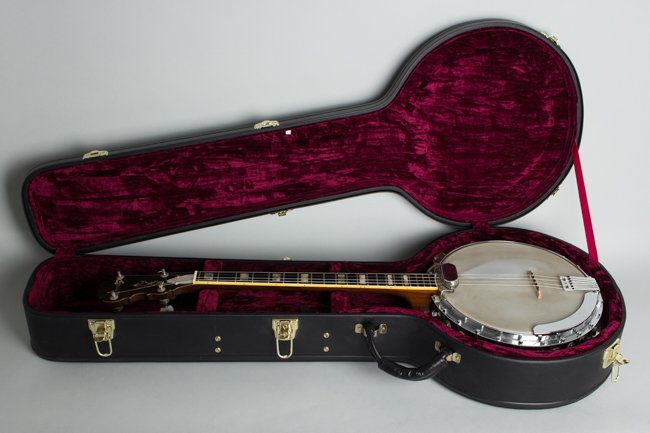 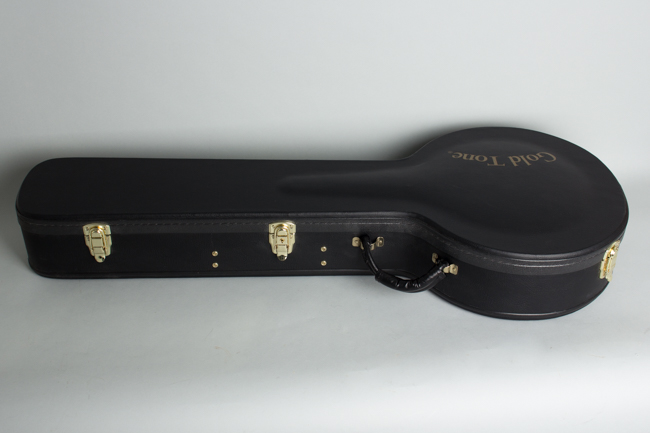 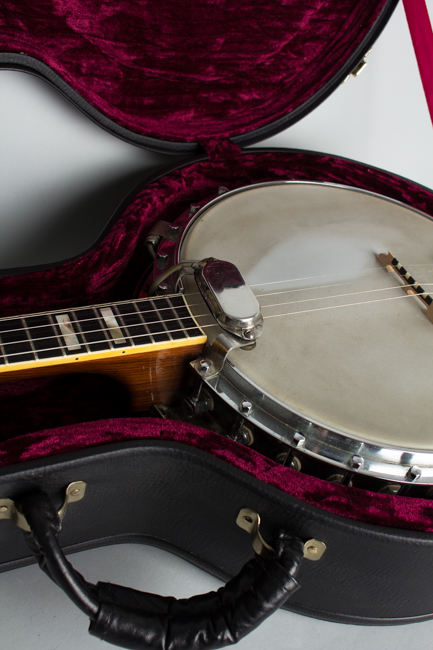 This is one of the more oddball instruments we have seen recently; an electric tenor banjo built -- or at least assembled -- by well-regarded luthier Sam Koontz. The New Jersey based Koontz's name is a fairly well-known in the vintage guitar world; in the 1960s and '70s he hand-built custom instruments with a unique visual flair. Some of his archtops made it into the hands of well respected jazz players including Pat Martino. He was also the chief designer for the excellent if short-lived line of Standel/Harptone guitars of the late 1960s.

Koontz is known to have built at least one solidbody electric mandolin, and on the evidence of this instrument least one electric tenor banjo! This is a peculiar instrument in some ways -- the work of an expert luthier but obviously not a banjo specialist. The result has a sort of thrown-together feel, as if someone asked Sam "Can you make me a banjo I can plug in?" and he cobbled something together to fit the bill.

The neck appears to be from Koontz's hand, carved to fit the rim exactly. The materials are very high grade, solid rosewood with a fine ebony fingerboard bound and inlaid with abalone blocks. The scale length is 23 3/4", on the long side for a tenor and to accommodating a 20th fret; most have 19. It has a very long headstock and a prominent volute, but does not feature the usual Koontz ornamental cutout at the crown. His name is inlaid in the headstock face over a pearl doodad, with a substantial solid pearl truss rod cover underneath. The tuners are Gibson branded, from the 1970s.

The rest of the banjo is something of a mixed bag. The top-tension pot appears to be from a 1970s Japanese Vegavox, with additional laminations added over the rim. The thin flange has star-shaped cutouts and looks like a pre-war Lange part. The resonator -- decorated with a large floral decal on the back -- most likely came from a 1920's Stromberg-Voisinet. The whole thing has a "let's see what's in the parts bin" look, but hangs together well and is perfectly functional, if rather heavy.

And then, of course, there's the pickup, mounted down by the neck joint suspended OVER the strings. It looks home-made with a hand-hammered cover, but it works well and sounds quite good. Just why Koontz made it this way is unknown, but perhaps it was how the customer wanted it. This banjo was certainly built in the 1970's, based on the more recent parts; Sam Koontz died in 1981, so it dates no later than that. It is a 4-srting curio for sure, but a fully functional one and sure to be a conversation piece wherever it appears!

This one-of-a-kind banjo is in good playing condition overall, though as some of the parts are much older it is hard to say when some of the wear was inflicted. The neck is very clean, with some light playing wear. The resonator has heavier wear to the back and sides including checking, scratches and dings some of which appear many decades old. The chrome plating is dirty in spots but not heavily worn.

It's hard to say how "original" much of this Frankenstein of a banjo is but it appears to remain as it was assembled by Koontz, even if two of the tension bolts have been replaced with compatible hardware-store screws. The plastic head appears original to the rim; it is somewhat dirty and has a small tear behind the bridge that has been patched with superglue seems to be stable.

The neck very solid with a rather chunky profile and a Gibson-style truss rod; it remains straight and easy to play with very clean frets. This is an eccentric instrument for sure, but came from the hands of a talented and well-respected and luthier and is quite functional. This was someone's dream once, and while the identity of that plugged-in banjo strummer is likely lost, this instrument remains a testament to Sam Koontz's creativity, if not the best example of his artistry! Excellent - Condition.
×