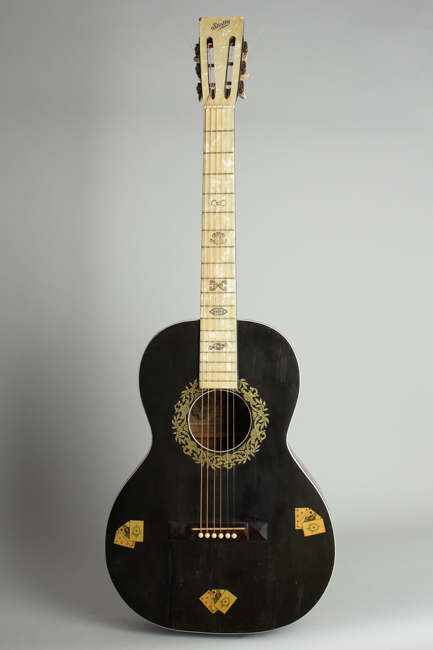 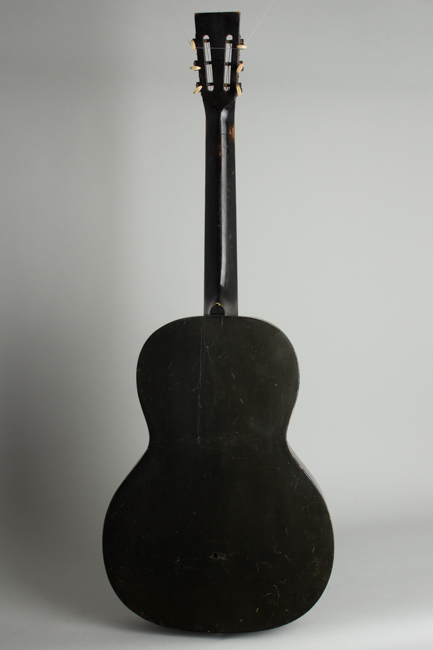 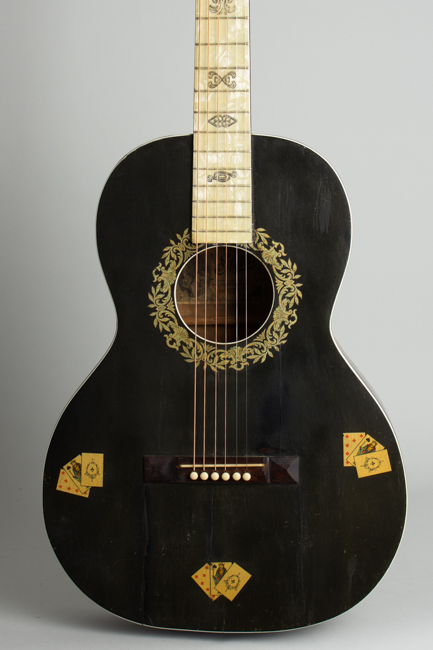 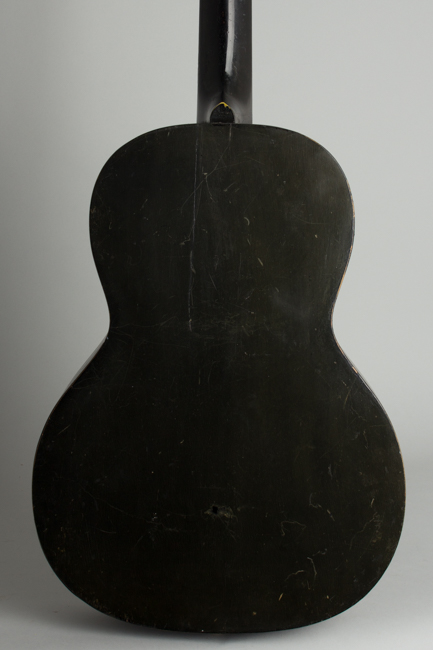 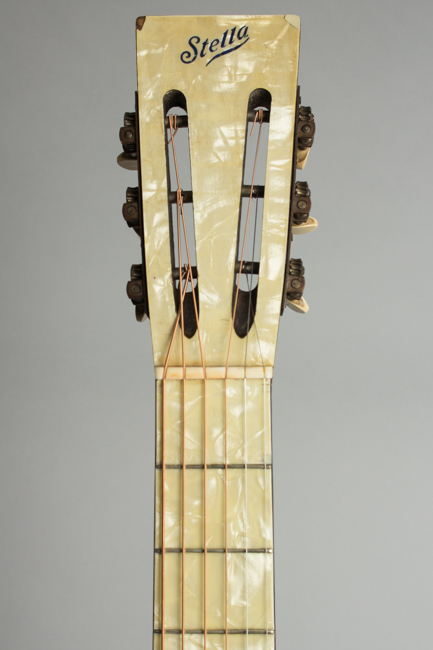 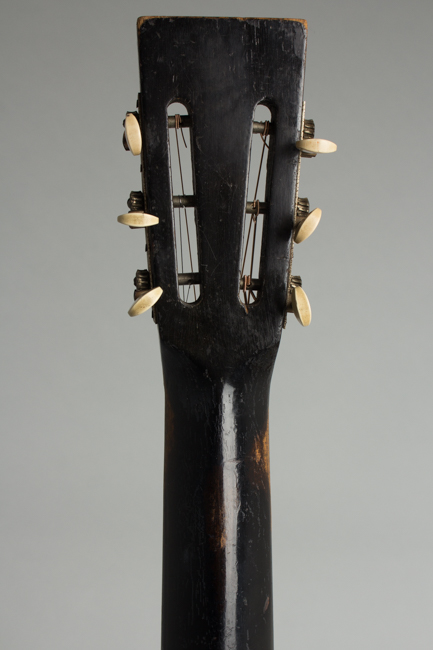 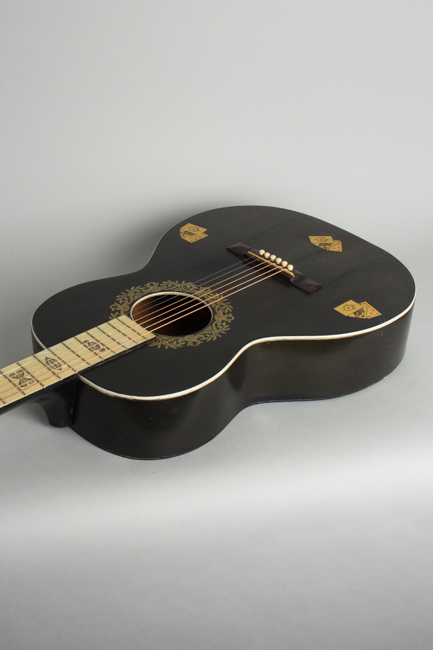 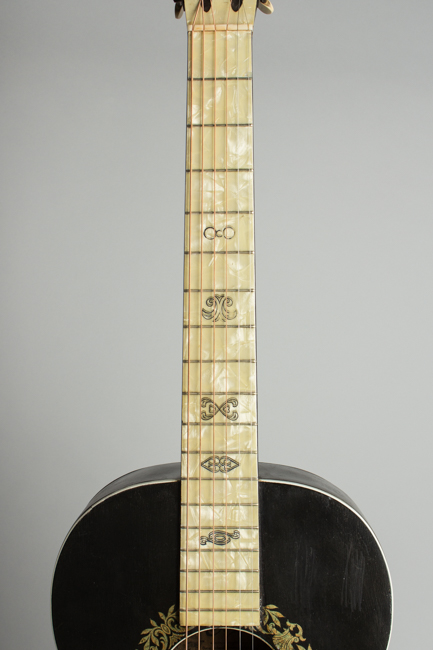 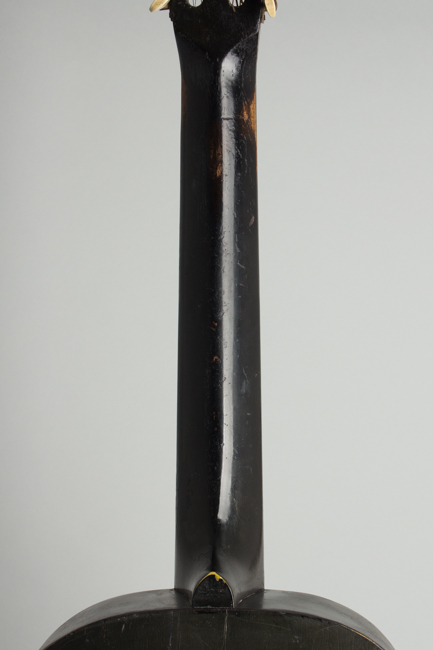 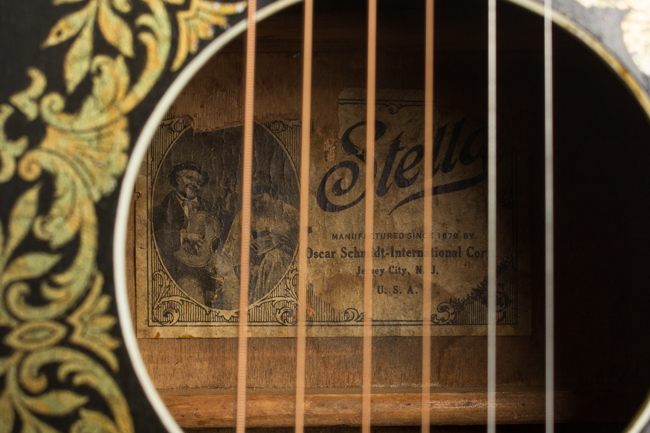 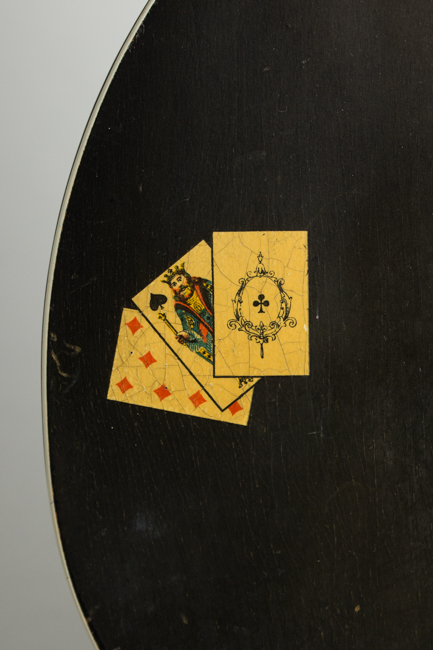 This is a very rare and extremely cool Oscar Schmidt instrument, one of the most distinctive in the entire Stella line. The "Gambler" is a retroactive nickname used for guitars with this cosmetic package by collectors and enthusiasts, although the name is not found in any actual Schmidt catalog. It refers to the ebony finish with playing card decoration on the top, which is similar to J.R. Stewart's "Le Domino" livery. It's likely that Chicago company had theirs on the market before Jersey City based Schmidt operation picked up the idea, but this competition resulted in some very cool and flashy (if relatively cheaply made) instruments from both. As the Great Depression hit, these inexpensive "decal" guitars were often the only instruments affordable to many Americans, and offered great looks and good sound for the money.

Over its production run from the end of the 1920s into the mid-'30s, there were a variety of Gambler variations. This version is the largest and fanciest of the six-string models (there was a 12-string!) and is usually referred to as the Gambler DeLuxe. Besides the satin black "tuxedo" livery it is dressed up with an engraved pearl celluloid fingerboard and headstock veneer. The iconic underlined Stella logo never looked better than cut into pearloid!

Besides the trip of playing card decals (Ace of Clubs, King of Spades, and Ten of Diamonds) the top is ornamented with ivory celluloid edge binding and a large gold stencil floral pattern around the sound hole. This guitar was the largest size offered, a Grand Concert model nearly 15" wide at the lower bout and close to 4" deep. Most Gamblers are built on concert size bodies with shorter scale necks, and this bigger model is quite rare in comparison.

Beneath the flashy cosmetics, the construction is typically Schmidt. The 12-fret all-birch body is ladder braced with a large flat bridgeplate in the classic Stella mode. The very long 26 1/2" neck is large and chunky with a "V" profile somewhat softer than older models. This is a big sounding guitar; with its long scale length it particularly shines tuned down to D or even lower. It is extremely well-suited to the sort of pre-war stylings that tend to make players lust after an original Stella in the first place, and a real showpiece that stands out in any context!

This Gambler has not seen extensive play time but has had a decent amount of repair work done over 90 or so years. Even so it remains in excellent playing condition and more original than many. There are a number of repaired grain cracks to the top, two in front of and three behind the bridge. These are solidly but inelegantly sealed up and so quite visible, with some light touch up around them. The back has one similar long crack extending down from the heel, and a much shorter one adjacent. There are a few light internal cleats included in these repairs. The side/back edges have been reglued as well.

There are some random scuffmarks on the top finish and dings, dents, and scrapes overall, but virtually no pick wear. The back of the neck is worn a bit in the first fret area with some general dings and dents along its length. There are a couple of small chips off the top of the celluloid headstock face; one has been patched in. A repro rosewood bridge has been fitted but internally the guitar has not been altered except for the cleats mentioned above and small plugs to clean up worn pin holes in the original bridgeplate. The original bracing is completely intact and has not been reworked or "improved" as many old Stellas have been subjected to. The paper Stella label on the inside back has lost about 20% of its area but is still quite legible.

The neck has been reset and some fretwork has been done to the original thin wire; this guitar has a low comfortable action and is one of the most friendly large-body Stellas to play we have had. The original tuners still work fine; even the bone nut remains original. This old "Gambler" has seen some hard times but is still ready to deal out a winning hand of authentic pre-war blues and ragtime, or really anything else you'd care to play! Very Good + Condition.
×