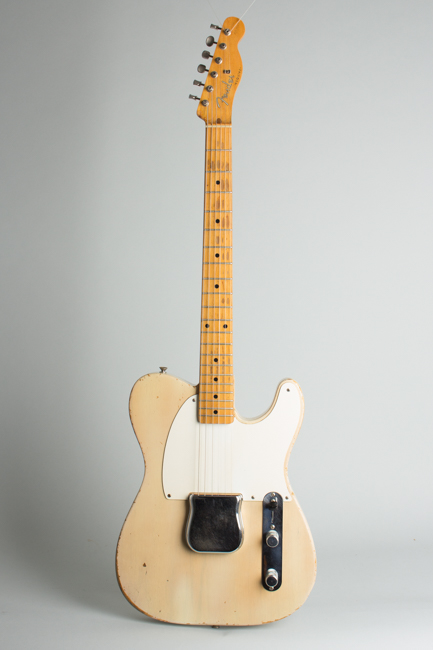 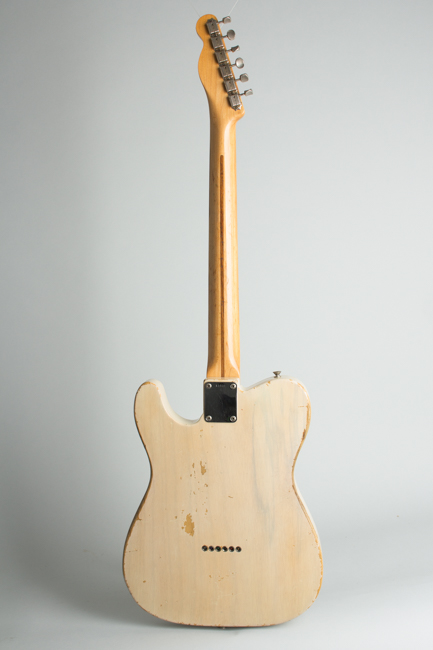 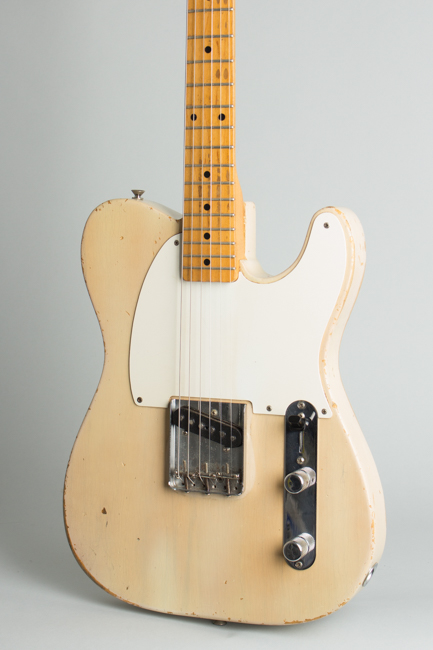 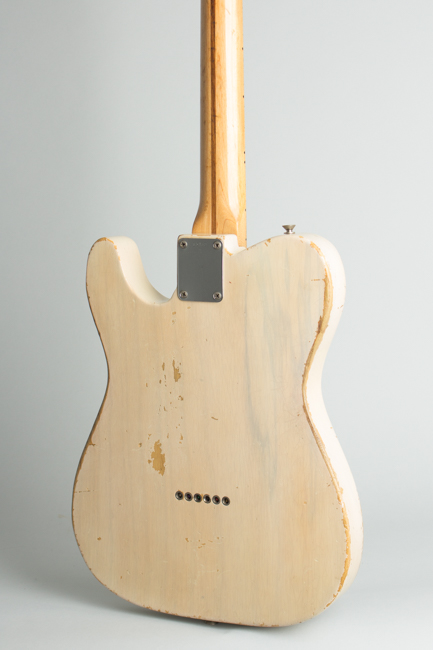 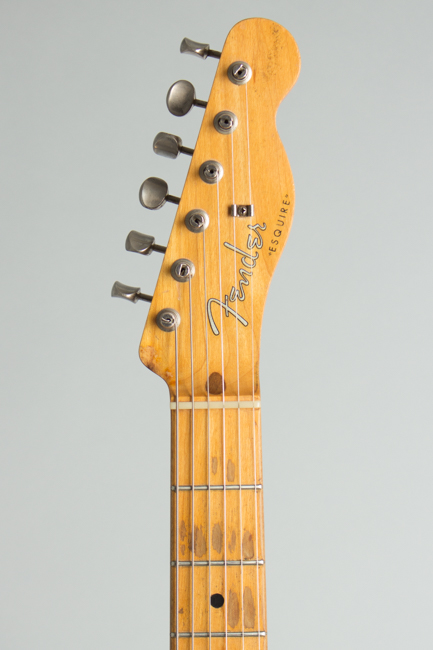 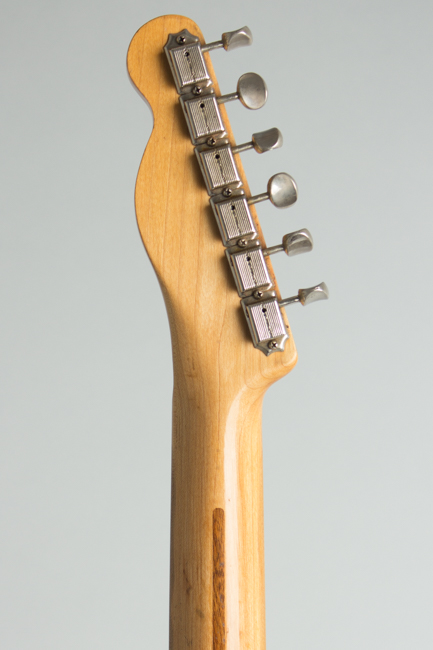 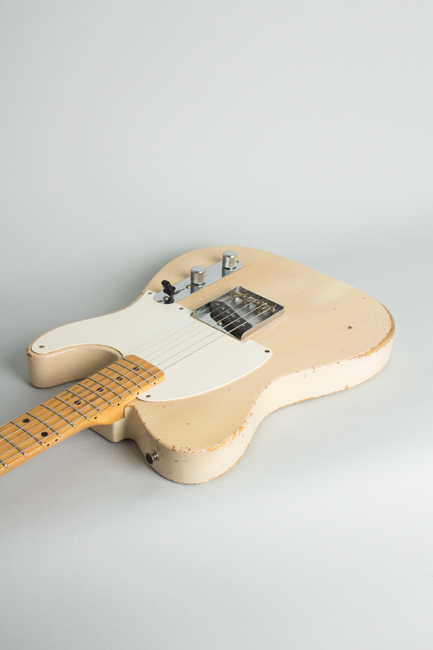 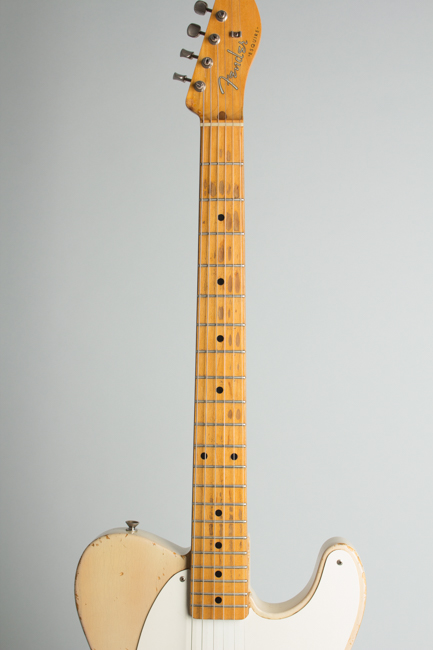 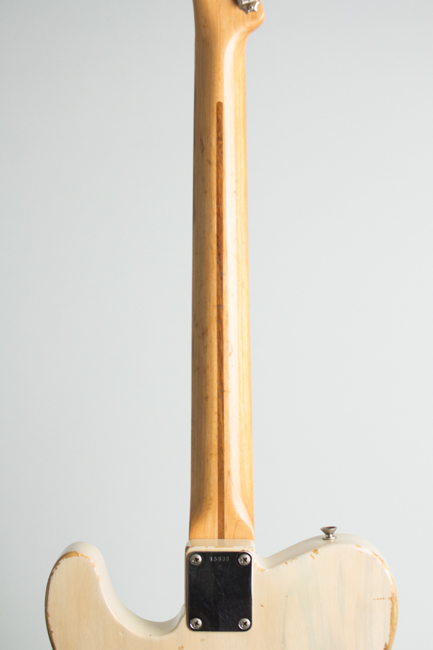 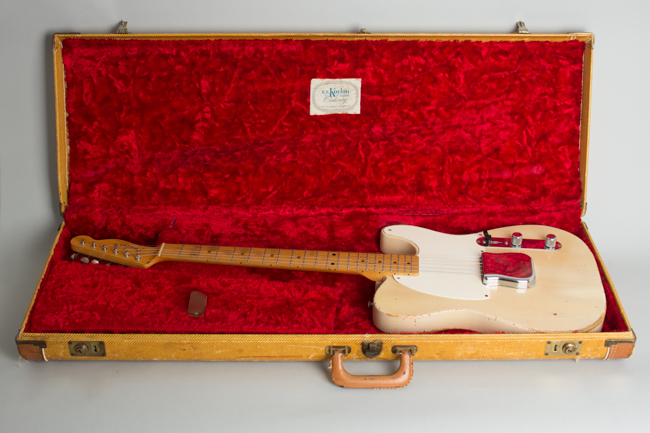 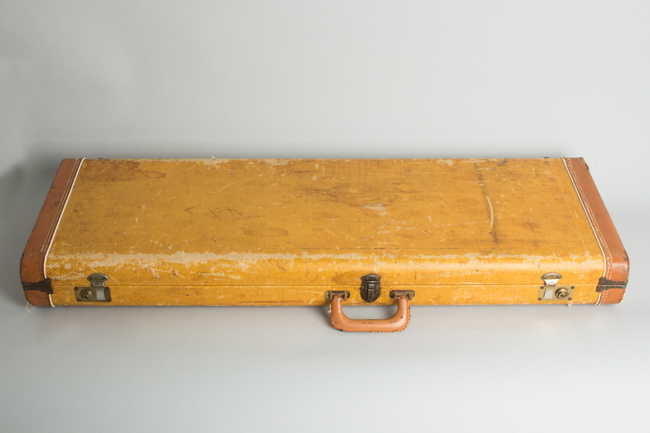 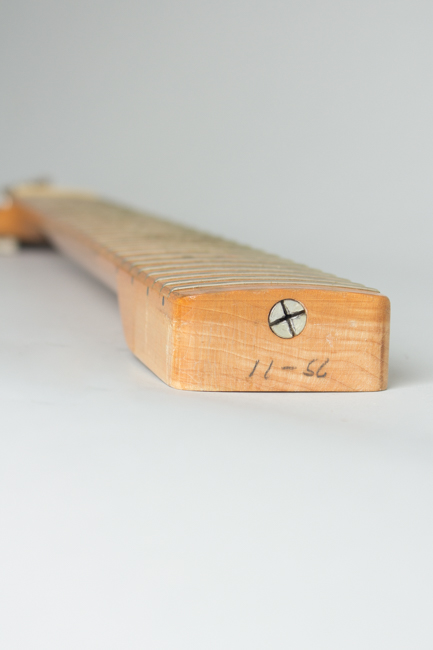 This lovely "whiteguard" second-generation Esquire is a superb example of 1950's Fender greatness, an extremely fine playing and sounding guitar. The Esquire was cataloged as a separate model but was really just a single-pickup Telecaster, allowing Fender Sales to offer a slightly cheaper $149.50 alternative to the buyer who couldn't quite spring for the Tele's $189.50 price tag. This late 1956 example shows typical features for the period including the single ply white plastic pickguard (standard by early 1955, replacing the earlier "blackguard") and the old script Fender logo above the newer "butterfly" style string tree.

The 5-digit serial number is stamped on the neck plate, having migrated there from the bridge base in late 1954/early 1955.The grainy ash body has a just slightly yellowed blonde finish, not as dark as the earlier '50s "butterscotch" color but more transparent than the 1960s "white-blonde" with some grain showing through. The one-piece maple neck is dated 11-56 in pencil on the heel, with a profile that is the earliest not-too sharp version of the "V" contour that became more prominent in 1957. The pot dates are soldered over but one can be seen to be stamped to the 20th week of (probably) 1956.

The body is marked "ESQ" in dark pencil in two places on the body under the pickguard, to remind the assembler not to mount a neck pickup. The empty neck pickup cavity has small pinholes for the pickup elevating screws but they were never mounted; the Esquire used all the same components as the Telecaster but they were assembled in smaller numbers, most dealers and players at the time springing for the two-pickup model.

The Esquire's single staggered pole pickup at the bridge is controlled by a volume, tone and 3-way switch with a "top hat" tip. The three-position switch selects a #1 bass-heavy rolloff setting, #2 in the center with and straight tone control and #3 "bypass" in the rear position sending the signal straight to the jack. This last setting is the Esquire's secret bonus, offering some of the finest, snarliest tones ever to emerge from the Fullerton factory.

This model was famously used by Paul Burlison with the Johnny Burnette Trio and many other early rock'n'roll and country players. While the most basic of early Fender guitars, the Esquire has a super no-frills vibe and a surprisingly versatile sound when mastered. This early "Whiteguard" Esquire is superbly comfortable to handle, very light at just under 6.5 LBs...with the bridge cover ON! It is simply a fantastic feeling and sounding instrument and a true joy to play.

This prime 1956 Fender shows some average wear overall but remains all original and in excellent playing condition. The body has fairly heavy checking with typical minor dings, dents and scrapes, mostly to the edges as is typical of slab-sided Telecaster family instruments. The lower back edge is worn down a bit softer than built from contract with a player's leg. There are no large areas of wear, some belt buckle scrapes to the back and a "case lid ding" in the top are the most notable.

The fingerboard shows typical wear through the lacquer and slightly into the wood over a decent amount of its length, but is not heavily divoted. The back of the neck has wear down to the wood just along the edges. There is one small "classic" cigarette burn off the low E tuner on the headstock. The guitar has been very neatly refretted with correct style wire, with no apparent overspray to the fingerboard. The frets have very little wear and a lot of life left in them.

The guitar remains original internally, having never had a neck pickup fitted or any wiring alterations. All hardware remains original down to the screws and snap-on bridge cover. The saddles have some light wear, the pickguard is somewhat scuffed on the top surface but again nothing is too heavily worn.

This old Fender is just the way we love 'em; played but not abused ready for the next 60+ years. It resides in the original red plush-lined tweed Fender case, which has some wear but is still quite functional. The cool "Koylon Foam" tag is under the lid, a fairly short-lived eccentricity in vintage Fender cases. Inside the pocket is the period "Fender Electric Instruments" polish cloth and an old Xerox of the original purchase contract, which indicates the guitar was sold on a time payment plan on June 29, 1957 for $214. The buyer, a Mr. Doty really got his money's worth there! Excellent - Condition.
×