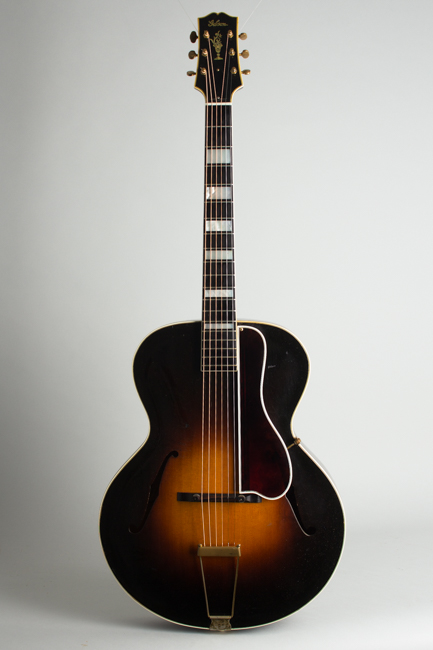 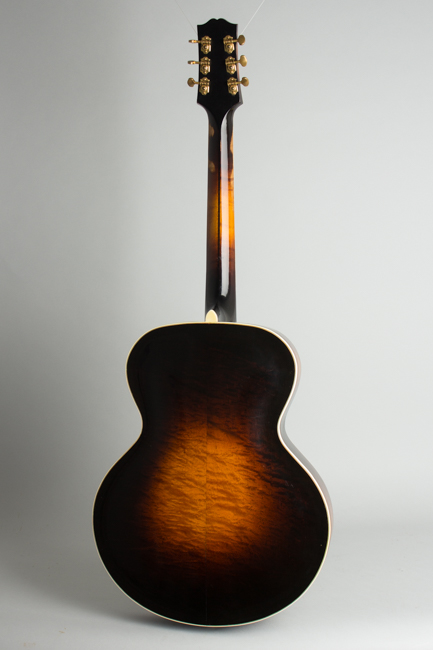 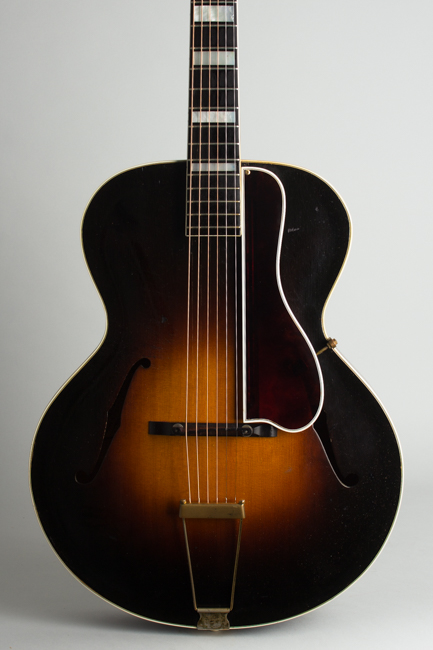 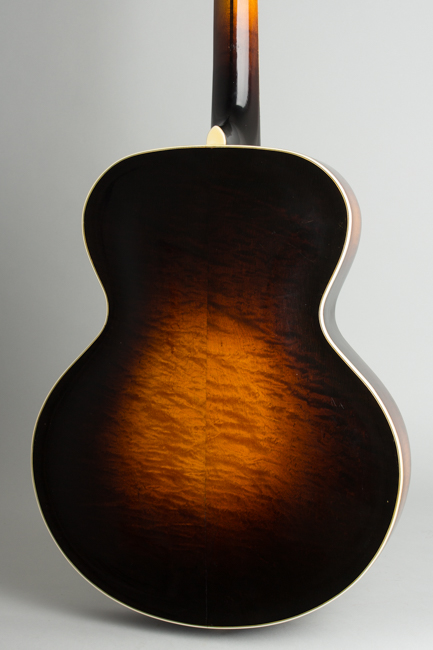 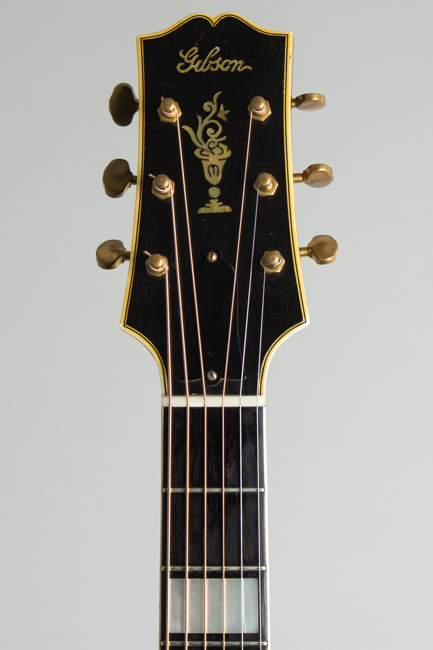 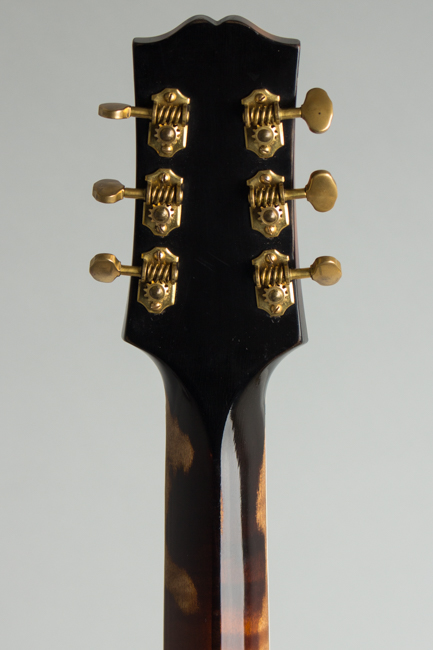 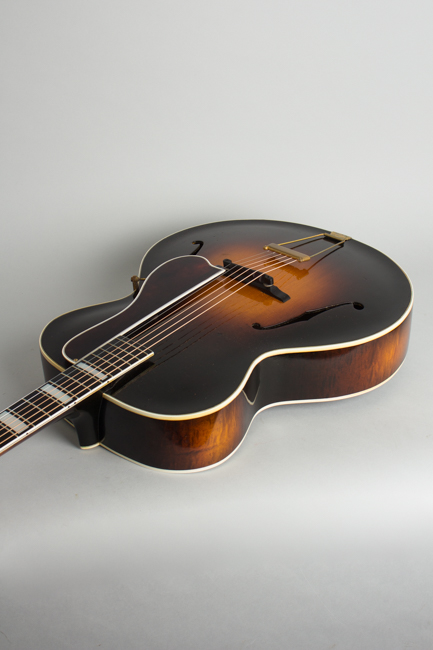 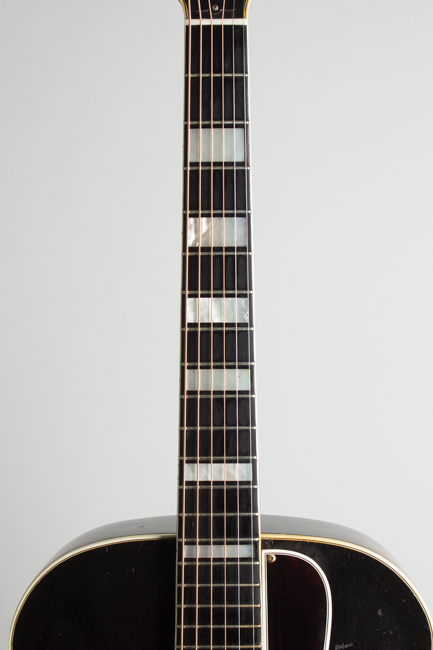 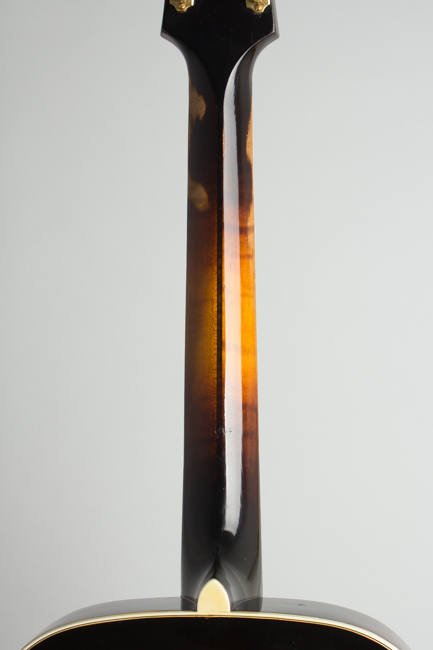 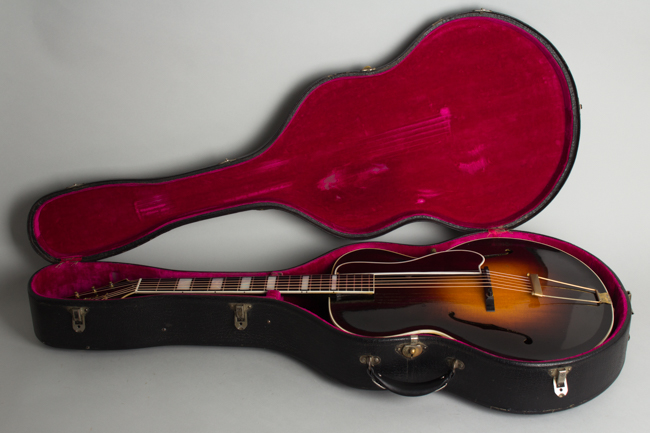 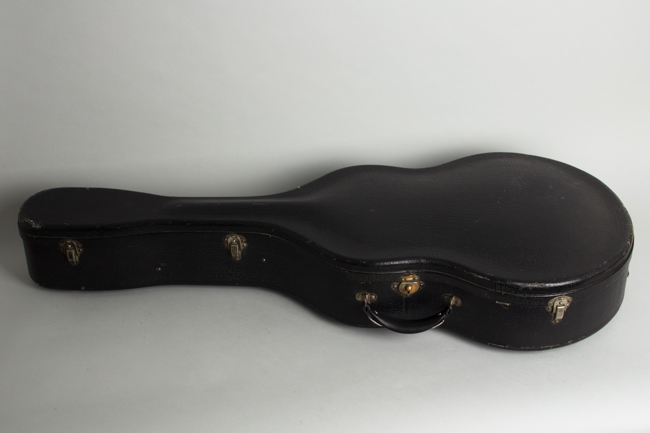 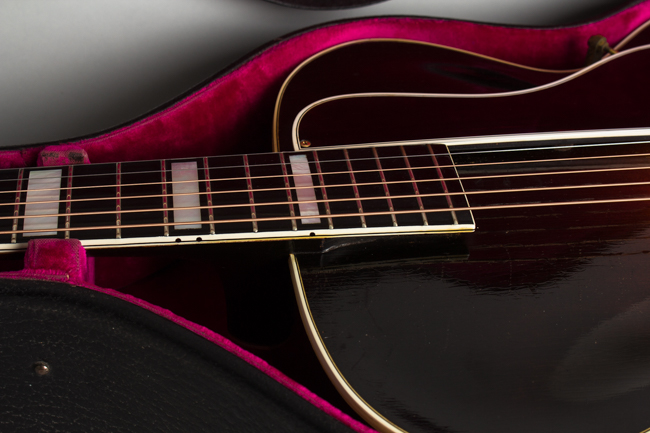 This 1934 L-5 is a truly superb example of the pre-eminent orchestra guitar of its era -- the original f-hole carved top guitar -- and an extremely fine-sounding instrument by any standard. Debuting in 1923-4, the L-5 was the first modern archtop, with a layout still widely copied today. At the time this one was built ten years later it was still the top of Gibson's line and generally considered the finest guitar orchestra made.

By 1934 dance and jazz band banjoists had almost universally converted to guitar; the L-5 along with Epiphone's competing Deluxe were the choice of nearly all top professional guitar players. Eddie Lang, the era's most influential guitarist, switched from a Gibson L-4 to a dot-neck (probably 1927) L-5, then to an early block neck L-5 around 1930, setting the trend for all to follow. From that time the L-5 ruled the roost for orchestra guitars, giving Gibson a dominance in this style of instrument they never really lost.

That said, these early 16" L-5s are fairly rare guitars today. Retailing at $275.00 (plus case), the L-5 was an extremely expensive instrument for the time (the top-of-the-line Martin pearl-trimmed Style 0M-45 retailed at $100.00 less). At the height of the Depression, only working professional users with steady salaries could afford the indulgence of such an instrument.

Most of these original 1930s L-5s were played extensively for many years, some owners preferring them to any later guitars. They can be seen in the hands of recording studio players well into the 1960s. As constant working guitars, these instruments were often modified, refitted, or refinished. This example is unusually well preserved showing only minor shows signs of use and remains in superb original condition.

This guitar shows typical features for the early-mid 1930s; the transitions between variants of the 16" L-5 is inexact at best. Referencing both the serial number and factory order number, it was likely built in the second half of 1934 and shipped late that same year. At that point the new Super 400 and companion 17" wide "Advanced" L-5 were already under development, to be released in mid-1935. Some players continued to prefer the older L-5 and decreasing numbers were still shipped for several years onward.

The top, back, and sides on this guitar carry a beautifully blended dark sunburst finish; the back is tiger maple with a pronounced figure. The top and back are triple bound in white celluloid. The side-line bound, straight-end ebony fingerboard has genuine pearl block inlay in place of the pearloid found on earlier 1930's versions. The 3-piece laminated curly maple neck is slimmer than some with a slightly rounded "V" spine and relatively shallow profile.

The pearl inlaid flowerpot in the triple-bound headstock with a straight across "Gibson" logo above are hallmarks of the 1932-35 L-5, as are the then-new Grover G-98 tuners. These are gold plated with screwed instead of riveted gears and metal "butterbean" buttons. The long triple-bound celluloid pickguard is screwed to the top by the neck block instead of pinned to the side of the fingerboard. The tailpiece is the 1930's "string through" style; the adjustable ebony bridge still has the 1920s split base with a patent number stamp.

This instrument has a powerful and very versatile sound typical of the best early L-5s; simultaneously warm and incisive with plenty of depth. It plays perfectly and is extremely responsive for an archtop guitar...it even sounds lovely fingerstyle! It is another delightful and inspiring example of one of our all-time favorite instruments.

This wonderful playing and sounding L-5 shows some some light wear but is far cleaner and more original than most, and remains in excellent structural condition. The finish shows very light typical checking and some small scratches, dings and dents overall, but no large areas of loss. There is one deeper "case lid ding" to the top and some small scratches that have been discreetly touched up.

The back of the neck is worn through somewhat on the spine and both edges below the 5th fret area but retains more of the finish intact than many. There are a couple of spots of minor finish disturbance on the top that are telltale signs of an old DeArmond pickup mounting. A small strap button hole was patched on the side a bit above the heel. What was someone thinking? It's an L-5, Sit DOWN when you play it. And wear a tuxedo, at least in public!

The guitar looks to have been refretted some time back with period correct wire; the frets are fairly low but comfortable. The ebony fingerboard itself shows very little wear. The only visible crack is a small grain split to the maple on the lower back off the center seam, sealed with no overfinish at all. Besides this there are no visible repairs beyond the tiny patched hole and the refret.

All hardware is original except the pickguard which is a nicely done replacement in the correct style. The original bridge looks to have possibly been lowered just slightly long ago. The neck angle is very good and there is plenty of room for action adjustment if desired. This lovely L-5 is still housed in the original case, which is far better preserved than most with some fairly minor external wear and a replaced handle. Overall this is a delightful example, a joy to play and to hear and just a classy guitar in every way. Overall Excellent Condition.
×